Batten down the hatches… with your voice? You heard it here first — the best home security systems offer hands-free voice control using Amazon Alexa and Google Assistant. With SimpliSafe, we were able to arm and disarm our system with our voice, and connect third-party smart devices to automate our life. So if you want to set up smart lights and thermostats in your home, or any number of other smart products, then SimpliSafe is worth a closer look. 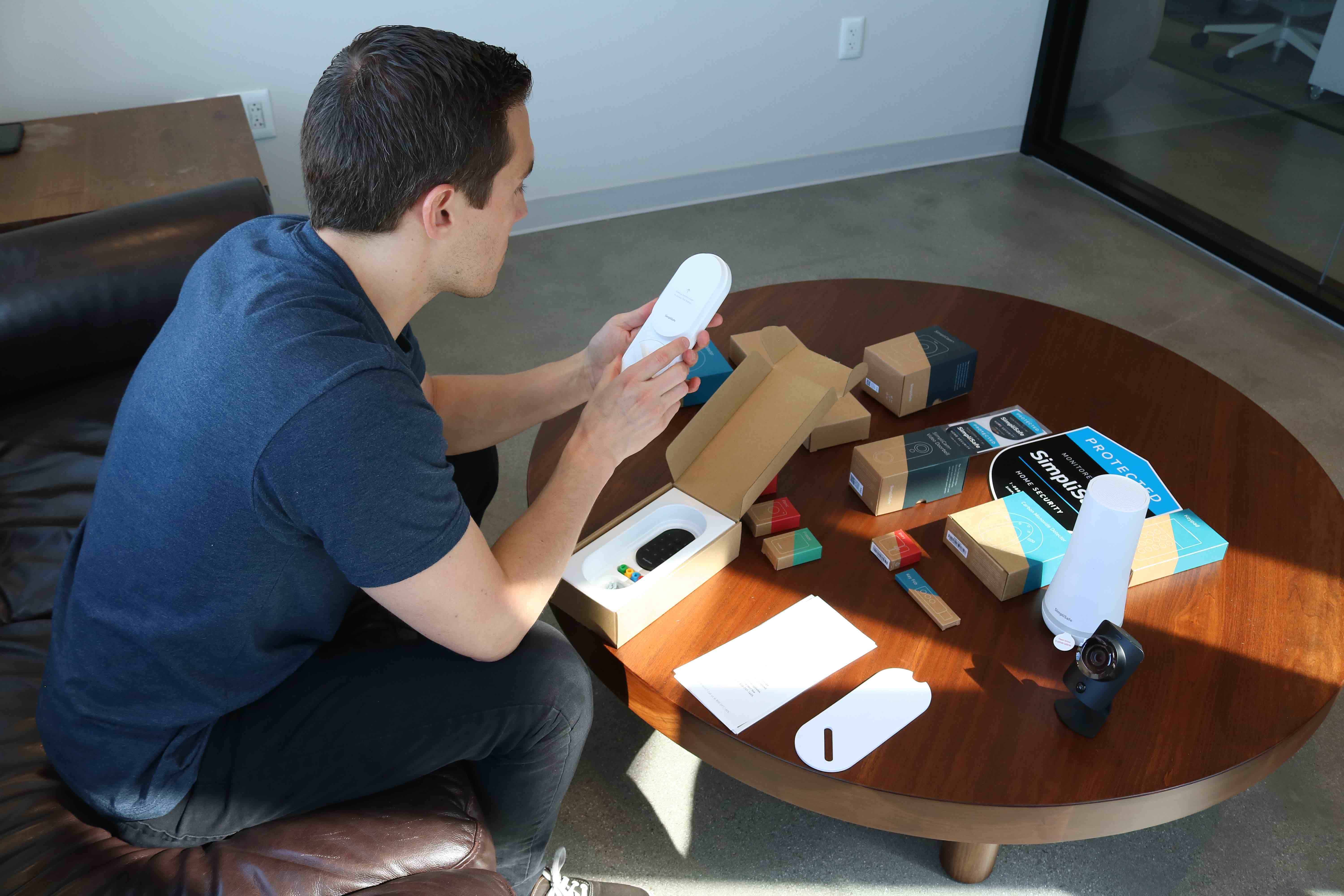 We recently tested SimpliSafe in-house, and while it probably won’t win any awards for cutting-edge home automations like Vivint, we were all-around impressed and actually pretty surprised by its capabilities and integrations. It works with the biggest names like Amazon Alexa and Google Home. But did you know that SimpliSafe also plays well with Apple HomeKit, Apple Watch, and August smart locks? And fingers crossed that it’ll soon work with IFTTT.

Let’s find out if SimpliSafe is worth the investment for tech-heads and smart home aficionados… or, if it’s better for folks looking for easy automation.

Before we dive into SimpliSafe’s home automations, it’s worth mentioning that you’ll need to sign up with SimpliSafe monitoring to access smart features. SimpliSafe has two different subscription plans: Standard and Interactive, priced at $17.99 and $27.99 per month respectively. You’ll have to spring for the Interactive plan if you want smart home integrations — but keep in mind the subscription also includes 24/7 alarm monitoring and video support.

We went with the Interactive plan, and we must say, we were quite happy with the features and benefits. Note that a month-to-month subscription is par for the course. If you want smart home automation and security camera recordings, you almost always have to sign up with a subscription service. It’s how the industry works. Thankfully, SimpliSafe’s no-contract plan comes with smartphone controls, which allowed us to control all of our smart features remotely straight from the SimpliSafe app. Pretty nice!

We should say that SimpliSafe excels in the ease-of-use department (‘simple’ is in the name!). Of course, this means you won’t get advanced features like AI or geofencing, but sometimes easy does it. We think SimpliSafe is a great DIY system for folks just looking to dip their toes in the home automation waters, but at the same time don’t want to complicate things.

So if you’re not super-comfortable with new tech, SimpliSafe might be just what you’re looking for. Without further ado, let’s find out what smart features and integrations SimpliSafe offers these days.

Here’s a quick reference guide that shows which home automation platforms SimpliSafe integrates with. Keep in mind that SimpliSafe might add compatibility with IFTTT, Z-Wave, and others in the coming months or years. As consumers ourselves, we’d love to see it. That said, we still think they offer a pretty good lineup of smart features.

We’re still getting used to calling Google Home by its new name: Google Nest. Call it what you will — SimpliSafe works with it. When you link SimpliSafe to Google Nest, you can say things like “Hey Google, am I protected?” or “Hey Google, arm SimpliSafe to away.” If you’ve yet to experience it, we think you’ll get a kick out of hands-free voice control.

We didn’t test this ourselves (we’re Alexa fans), but we’ve heard it’s smooth sailing. The new Nest Hub Max is another product that shows a lot of promise. This all-in-one smart home display allows you to pull up your SimpliCam’s live video stream right on the screen. Put this fancy tablet on your kitchen island and your friends and fam will definitely take note.

Finally, although we’re partial to Alexa, we will say that Nest smart speakers offer better sound quality (bump that bass!) compared to Alexa-devices like the Echo Dot. Even the Google Home Mini packs a punch, despite its small stature.

As mentioned, we’re big fans of Amazon Alexa and the way it works with SimpliSafe. It’s probably the most popular voice assistant, and we appreciated how easy the integration was to get started. All we had to do was enable the SimpliSafe Alexa skill on our Echo Dot and Echo Show, and then run through the step-by-step integration instructions. Within a few minutes we were commanding Alexa to arm and disarm our system, lock our front door, and show our live stream video on the modern smart display, which is pretty similar to the Nest Hub Max.

If it works in your budget, we highly recommend going with the Amazon Echo Show to really modernize your system. You can get similar touchscreen functionality from brands like ADT and Vivint, but it’s probably going to cost you a lot more with those premium brands. So you can think of SimpliSafe plus an Echo Show like an affordable workaround to enjoying a modernized touchscreen system. Your pocketbook will certainly thank you.

You should also know that SimpliSafe and Alexa work great with the Arlo Pro 3 cameras. Integrate this into your SimpliSafe security system and we think you’ll like the extra layer of security you get. We’d also recommend looking into Ring’s home security cameras. Of course, since Ring is owned by Amazon, you can bet their indoor, outdoor, and doorbell cameras work seamlessly with Amazon’s Alexa. In fact, SimpliSafe + Ring Cams is our go-to setup.

The Apple Watch puts your home security commands right on your wrist. So let’s say you’ve gone out for dinner but forgot to arm your house — you can access your SimpliSafe app on your Apple Watch to secure your home. Your tablemates will think they’ve stepped into the future.

With that said, more and more home security companies are partnering with Apple for this nifty new integration. So it’s nothing all that unique to SimpliSafe.

August Smart Locks is our top pick for electronic door locks that you can control from pretty much anywhere. Combine August with SimpliSafe and a voice assistant like Alexa and you’re living the good life. Just say “Alexa, lock my front door,” and you can keep binging the latest Netflix du jour and never even have to get up. This is one SimpliSafe automation that’s a must-have.

Note that August makes several different smart locks that work with SimpliSafe, but we’re really liking the new Wi-Fi Smart Lock. At $249.99, it’s not cheap, but it’ll allow you to remotely lock and unlock your door, keep tabs on your door status, hand out virtual keys, and lots more. Of course, August works with Google Home (er, Google Nest) as well.

Samsung SmartThings is easy-peezy, but the SmartThings-to-SimpliSafe integration is another story. There’s a back-door way of integrating your SimpliSafe system with SmartThings, but we don’t really recommend it. It can get pretty complicated. So if you’re a SmartThings user, you should wait until SimpliSafe unveils this integration, which we think is coming soon (fingers crossed).

And we hope it comes soon! We’ve seen the power of SmartThings in systems like ADT. In fact, some ADT Security packages come with this smart platform integrated right into the hub. Smart lighting, doorbells, thermostats, door locks — you can manage it all via SmartThings right from ADT’s touch screen panel. But again, if you’re looking for SmartThings connectivity with SimpliSafe, patience is a virtue.

You might know that IFTTT stands for “If This, Then That.” It’s a big player in the smart home automation market. Unfortunately, we found that SimpliSafe doesn’t offer this integration; not yet anyway. Once the company integrates with IFTTT (again, fingers crossed), you’ll be able to configure “recipes” that can turn on your Hue smart lights when SimpliSafe is disarmed, lock your August door lock when your alarm is tripped, and other helpful automations.

With that said, if you run third-party devices that happen to work with both systems, you might find a way to access IFTTT recipes with SimpliSafe. However, the company has not yet shown its hand on whether it plans to integrate IFTTT into its security platform. So keep a lookout! And we’ll keep you updated here.

We say it like it is around here. And we must say that SimpliSafe could stand to be more “intelligent” when it comes to home automation. That is, we wish their systems worked with third-party platforms like Z-Wave and Zigbee, IFTTT, and others. 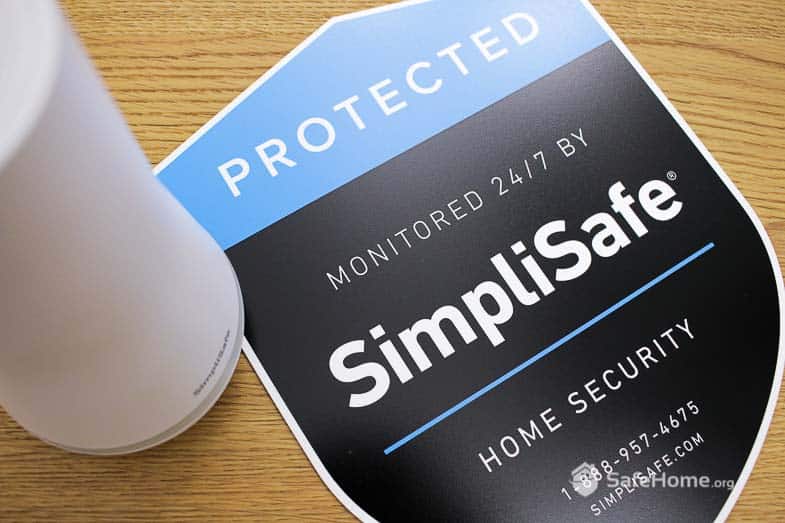 But then again, SimpliSafe does play extremely well with Amazon’s Alexa, Google Nest, and Apple HomeKit (although not natively). And if you’re sporting an Apple Watch, we think you’ll really like that integration. (Arming your security system from your watch is something straight out of a James Bond flick.)

To sum things up, we think SimpliSafe offers just enough home automations to keep most folks happy. It’s not our best-rated home security system by accident; so if you’re looking for all-around value and affordability, we’d recommend giving SimpliSafe a try.

To take it a step further, if you have the budget, we recommend integrating an Amazon Alexa Show, along with Hue smart lights, an August smart lock, and a couple Ring Stick Up Cams for good measure. This combination of products will keep you and your family smart and safe without lifting a finger.