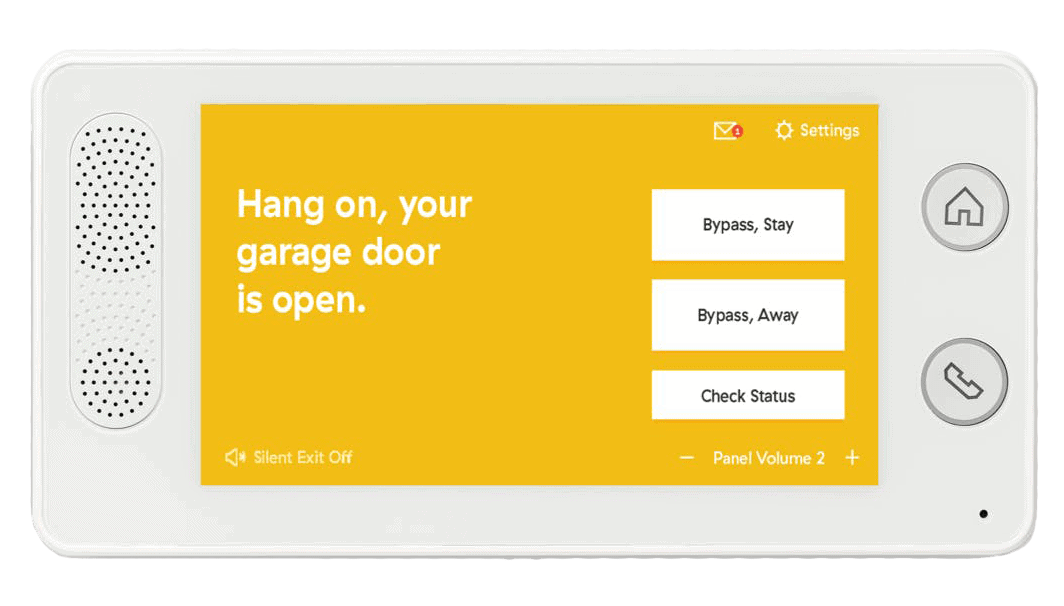 SecureScore™: 8.8 / 10 This rating is derived from our editorial team's research, hands-on product testing, and customer surveys.
Are you sure Cove is right for you?
See 3 Systems We Like Better
Rob Gabriele https://www.safehome.org/author/rob-gabriele/ https://www.safehome.org/author/rob-gabriele/
Equipment PricingMonitoring PricingPackagesAdditional CostValueFeaturesContractsRecap

Cove recently entered the market as an affordable DIY home security option. We recently tested and reviewed Cove, and we really liked what we found. But today, we’re going to dig into Cove’s equipment costs and monitoring plans to see if they have a system that works in your budget. You’ll see that it stacks up surprisingly well against other affordable home security systems like Abode and SimpliSafe.

We’ll briefly touch on the features and tech, but our aim is to discuss the value that Cove brings to the table. If you’re like most Americans, you want to protect your home and family without breaking the bank. Thankfully, today’s best home security systems offer plenty of protection for under $30 per month — and you can count Cove among these popular picks. 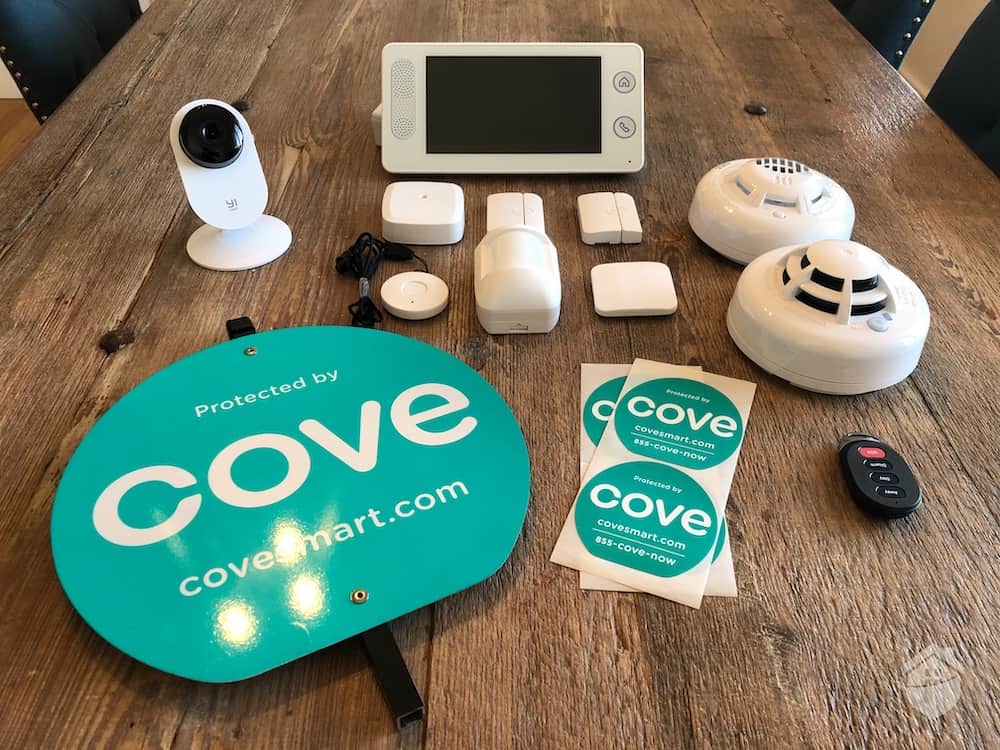 So if you’re wondering if Cove’s equipment and monitoring is right for you, this in-depth roundup will answer all of your burning questions and then some. So let’s get started!

Like almost every home security company, Cove charges for equipment and monitoring. Those are the two main costs to consider. When it comes to equipment, we can say that Cove is on the cheaper end of the spectrum.

For instance, most entry sensors on the market are priced around $25 each, but Cove only charges $15 per sensor (or $7.50 if you catch a deal). Their touchscreen control panel called the Cove Touch is currently marked below $150, and the indoor camera is in the $50 range, though you can score one for free with any purchase of a starter system. So if you’re looking to save some money, Cove might be a smart bet.

To give some perspective, we’ve found that most home security systems require a monthly monitoring fee, and Cove is no different. You have two plan options: Basic and Plus. Both plans come with 24/7 professional monitoring and environmental monitoring. And both include something called RapidSOS Ready,1 which you can read about in our in-depth Cove home security review. As a bonus, we share all about how the police ended up at our home while using Cove (true story). 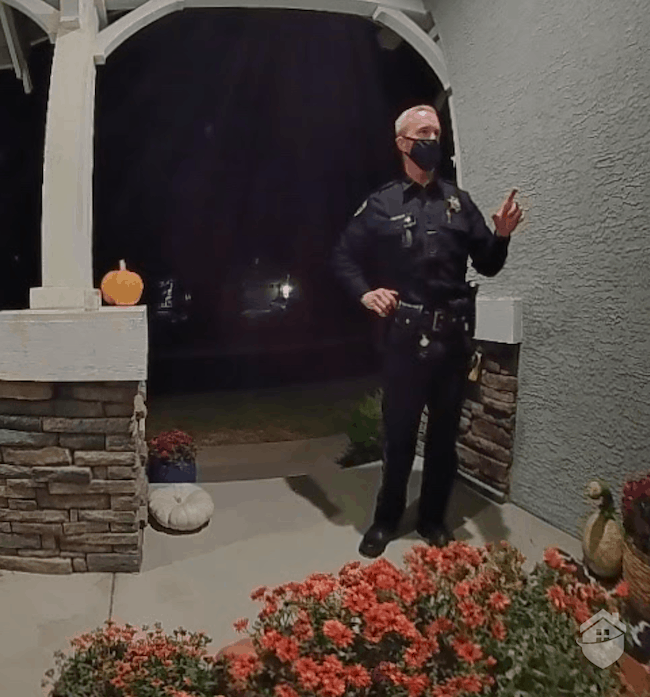 Police Officer checking up on us thanks to Cove Monitoring

Note that Cove does not connect to your Wi-Fi for monitoring. Rather, they’ve invested in AT&T’s 4G LTE Cellular network so that their systems run a cellular connection. This translates to faster and more reliable communication with the monitoring center. In our roundup of the top cellular home security systems, we’ve found that most companies charge $39+ per month for this premium service. But Cove’s plans start at only $17.99 and top out at $27.99, so we were pleasantly surprised with the reasonable fees.

If cellular monitoring is something that really interests you, we’d also recommend exploring packages and plans offered by Frontpoint Security. We recently tested their options, and we wrote a hands-on Frontpoint Security review to share our findings. In the meantime, here’s an overview of Cove’s monitoring subscriptions.

Cove doesn’t sell equipment packages, per se, but if you piece together a kit, here’s what you can expect to spend based on your home size.

“I encourage people to take advantage of Cove’s additional security components such as their glass break sensor. Most home burglaries I’ve investigated involved the thieves gaining entry through a rear sliding glass door or window. Make sure to install at least one glass break sensor in this type of area. With Cove, you’ll receive instant notification when the sensor detects the sound of broken glass.” 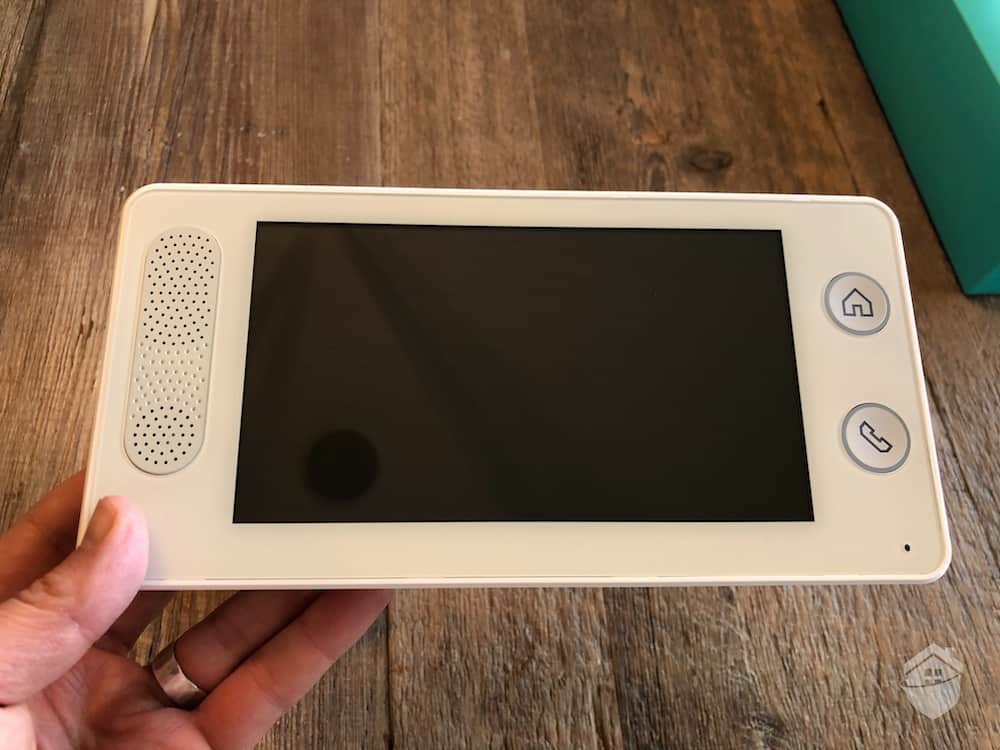 Closeup of the Cove Panel

FYI: Cove is a great option for apartment living, as there are no contracts, and the setup/takedown process really couldn’t be easier. If you currently rent, have a look at our roundup of the best home security systems for apartments and condos.

Mind you, we like having a zero-interest financing option that spreads the equipment cost over 3-5 years. But Cove does not offer this option. You’ll have to foot the equipment costs upfront. Thankfully, you’re only looking at $225 on average, which is certainly on the lower end in terms of affordability for the industry. In other words, it won’t put too much of a strain on your wallet.

You might get nickeled and dimed from some companies out there — but there’s typically a reason for it. For instance, with Vivint and ADT, you have to pay for professional monitoring and a one-time activation fee. This is because you’re getting white-glove service from the pros. If you’re interested in professional installation, we recommend checking out Vivint’s smart home security systems, or ADT’s plans and packages.

On the other hand, with DIY home security systems like Cove, you’ll roll up your sleeves and do it all yourself. So naturally, there aren’t any hidden fees to worry about. All you have to worry about is the upfront equipment cost and the reasonable monthly monitoring fee.

Did You Know: Always read the fine print before you buy. Better yet, get on the phone with a representative from the company and ask them very specific questions about their terms of service. Finally, we recommend not signing a 3- to 5-year contract unless you’re fairly well established and will live in one place for a while.

The Value We See In Cove

We mentioned that you have to “roll up your sleeves” with Cove. But that’s not entirely true. The equipment setup is fast and easy, and in many ways it reminded us of SimpliSafe’s hassle-free DIY installation. With this in mind, we think Cove delivers lots of value for those who don’t like fussing with new technology. Just note that we recommend springing for the Plus plan, as the Basic plan is limited in features.

We think Cove is also a safe bet for folks who want to dip their toes in smart home automation, but without spending a fortune on it. Keep in mind that Cove systems integrate with Google Assistant and Amazon Alexa for voice control.2 And there’s an intelligent feature called ‘Routines’ that we found in the Cove app. This let’s you set custom ‘rules’ or automations; so for instance, we set Cove to automatically arm every night at 10pm. 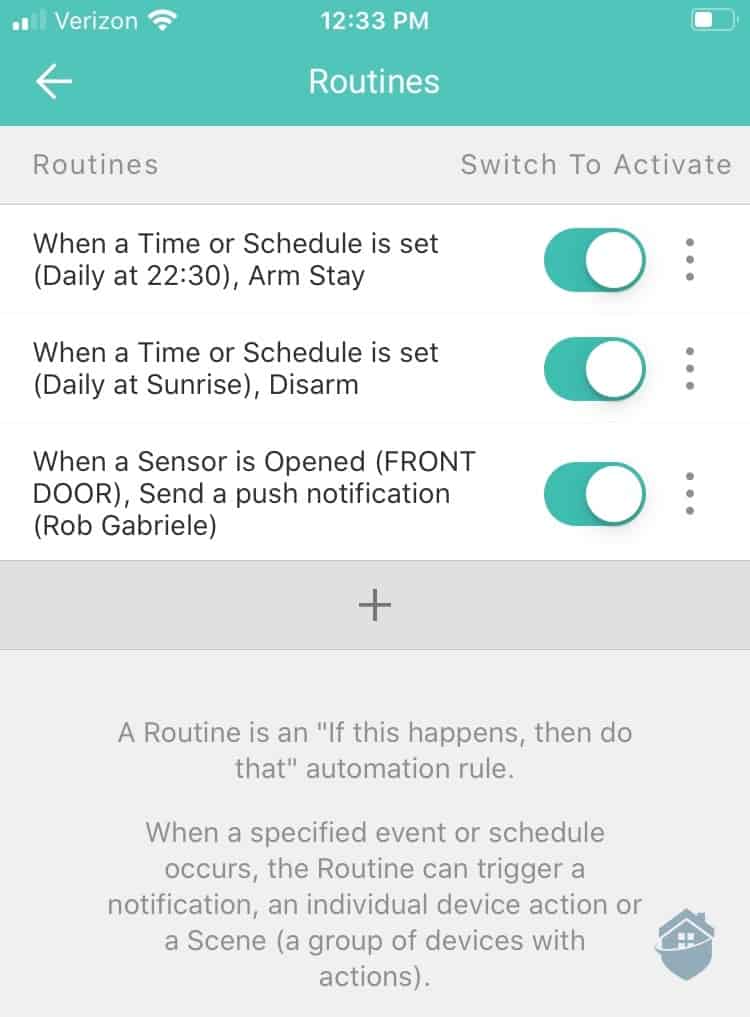 We do think Cove’s camera options could be expanded. As it stands, Cove only sells an indoor camera, an outdoor camera, and two video doorbells from SkyBell and Kami. Don’t get us wrong, Cove’s cameras are solid in terms of performance, and they are pretty affordable. But we have hands-on experience with the best security cameras out there, and Cove’s cameras left us hoping for more advanced features. 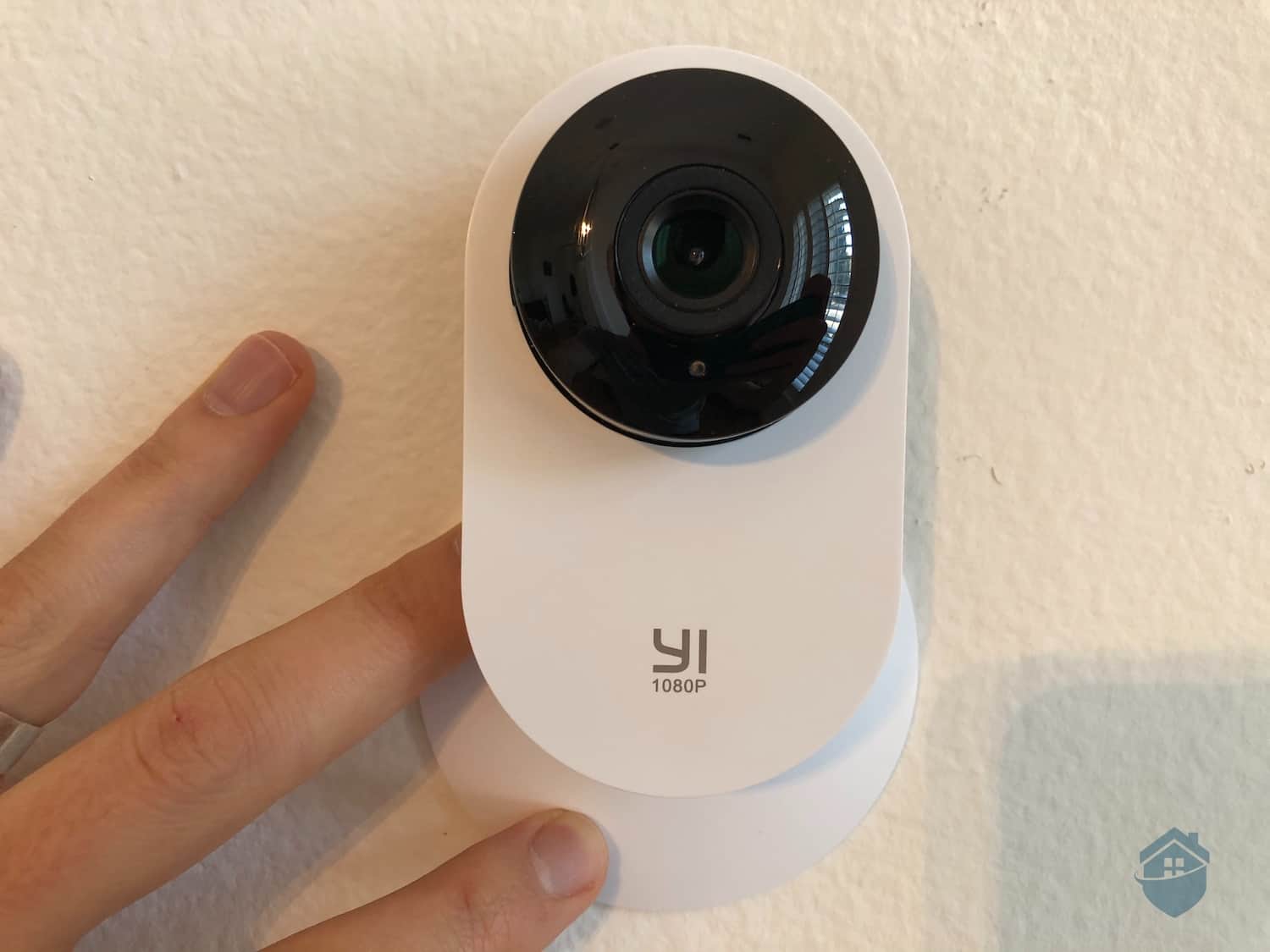 So if video is important to you, we recommend exploring Ring’s selection of cameras. Or if your budget allows, we recently tested and reviewed the Arlo Pro 3 and were very happy with our findings there as well.

When considering a DIY home security system, a good rule of thumb is to steer clear of long-term contracts if you can help it. Fortunately, Cove offers month-to-month monitoring, allowing you to pay as you go. We’re big fans of no-contract home security systems. But with that said, contracts aren’t always bad. They can be a tool to pay off expensive equipment over the course of several years. After all, not everyone has hundreds of dollars laying around to spend on a home security system. And if you ever feel constrained by an agreement, there’s usually a way out.3

Cove home security equipment is deeply discounted right now. Currently, the company is selling all of their equipment at 50% off. Another Cove deal to look for is a free Yi camera with the purchase of a home security system. But even if you had to pay for a camera, Yi is a budget option and will only set you back $20-$30. As of this writing, Cove is not running any special promotions on their monthly monitoring plans. But with prices that rival Ring Protect subscriptions and abode Home Security costs, Cove certainly won’t break the bank.

Bottom Line: Is Cove Worth Your Time?

After using Cove’s equipment and testing out their monitoring service, we have full confidence that this young company will be a household name soon enough (they’re already investing heavily in creative marketing).4

Their home alarm systems start in the $150 range, and you can sign up with a no-contract monthly monitoring subscription for either $14.99 or $24.99 per month. In our eyes, with these prices, Cove brings stiff competition to other more established DIY brands like SimpliSafe and Frontpoint Security.

While it might not be our top-rated pick, it’s pretty high up on our list. We do wish they offered equipment packages and bundles, though. As it stands, Cove equipment is purchased à la carte, which isn’t necessarily a bad thing. We think as the company builds more momentum in the market, they’ll end up selling plenty of pre-packaged kits, which will likely bring even more savings. All things considered, we think Cove is definitely up to the task of securing your home and family.

Yes, Cove is a 100 percent wireless home security system. This means there are no wires for burglars to cut, and it’s easy to take the system with you when you move.

Is Cove difficult to install?

No, Cove has one of the fastest and easiest installations in the business. It only took 10 minutes to install from start to finish.

Does Cove have cameras?

Cove’s professional monitoring works swimmingly. I accidentally set off the alarm and was unable to give the proper passcode, so the monitoring center sent the police to my house.

Does Cove have smart home automation?

Cove is fairly limited in terms of smart home automations. It does work with Amazon Alexa and Google Assistant for voice control, but it currently doesn’t integrate with smart lights, thermostats, and other smart devices.