The way we communicate is evolving. As we enter an increasingly more digital world, communication through social media has become more important than ever. From rallies to revolutions, social media platforms like Facebook and Twitter can do more today than be host to memes and fake news.

However, not all politically motivated agendas online seek to do good. Hate groups and hate speech are changing too, and their presence online is growing. Some of these prominent accounts and agendas, ranging from white supremacy to anti-immigrant and anti-LGBT, not only grew online in 2016, but they also amassed more likes in 2016 than any year since 2008.

We studied these Twitter accounts to understand not just how hateful sentiment has evolved over the years, but also in which states these comments originate. Which hate groups have the most followers, and which segments of the American population are most likely to be targeted? Read on to learn more about the hateful state of social media in the U.S. today. 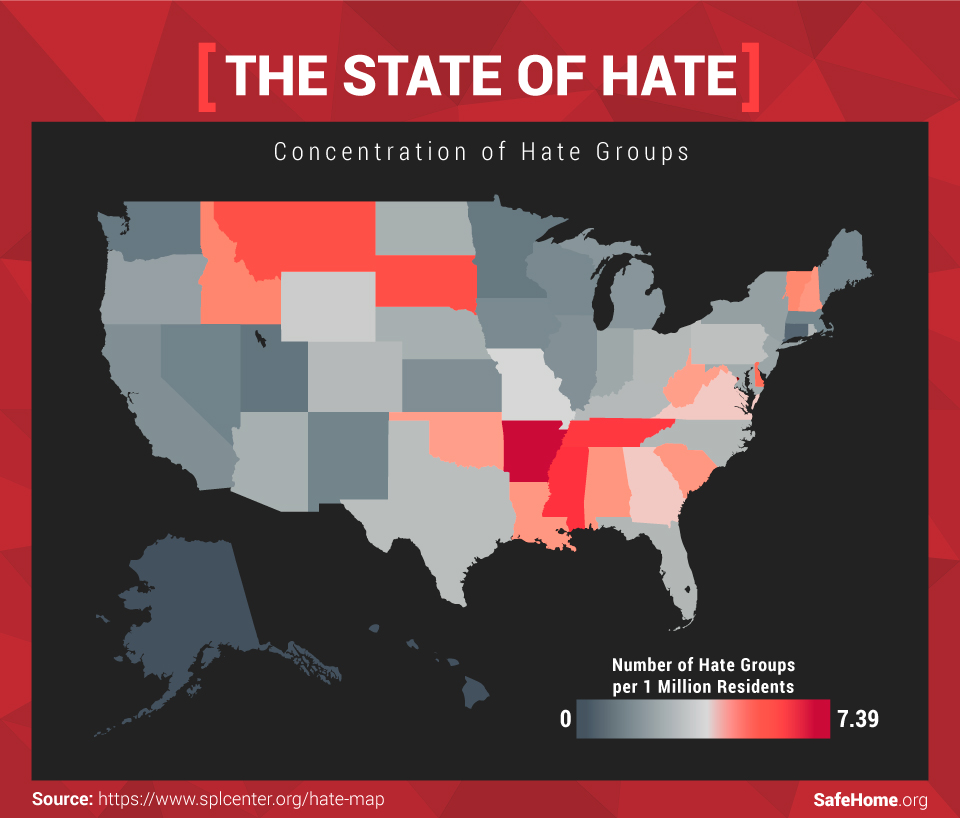 Arkansas is also one of five states (along with South Carolina, Georgia, Wyoming, and Indiana) that currently have no state-instituted hate crime laws to protect victims from crimes, such as assault and vandalism stemming from their race, gender, or sexual orientation.

The Most Hateful States 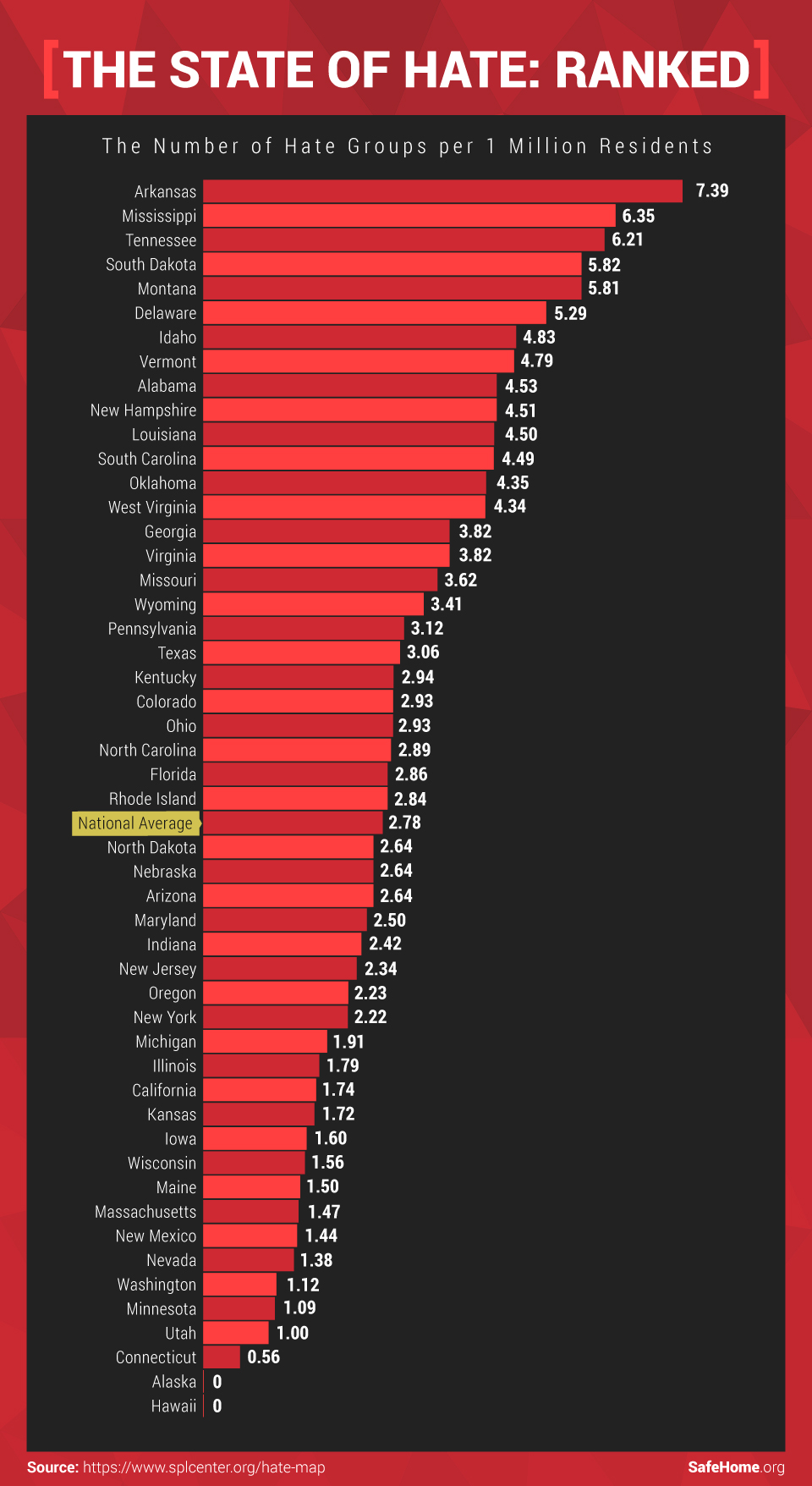 On a state level, Arkansas had the highest concentration of hate groups, numbering more than 7 hate groups per 1 million residents. The state is host to multiple Nazi and Aryan groups along with several Ku Klux Klan organizations and other white supremacist groups.

Aligning with this high percentage of hate groups, Mississippi, Tennessee, and Montana had between five and six hate groups each per 1 million residents. Combined, they host neo-Nazi, black separatist, and racist skinhead groups, among others. 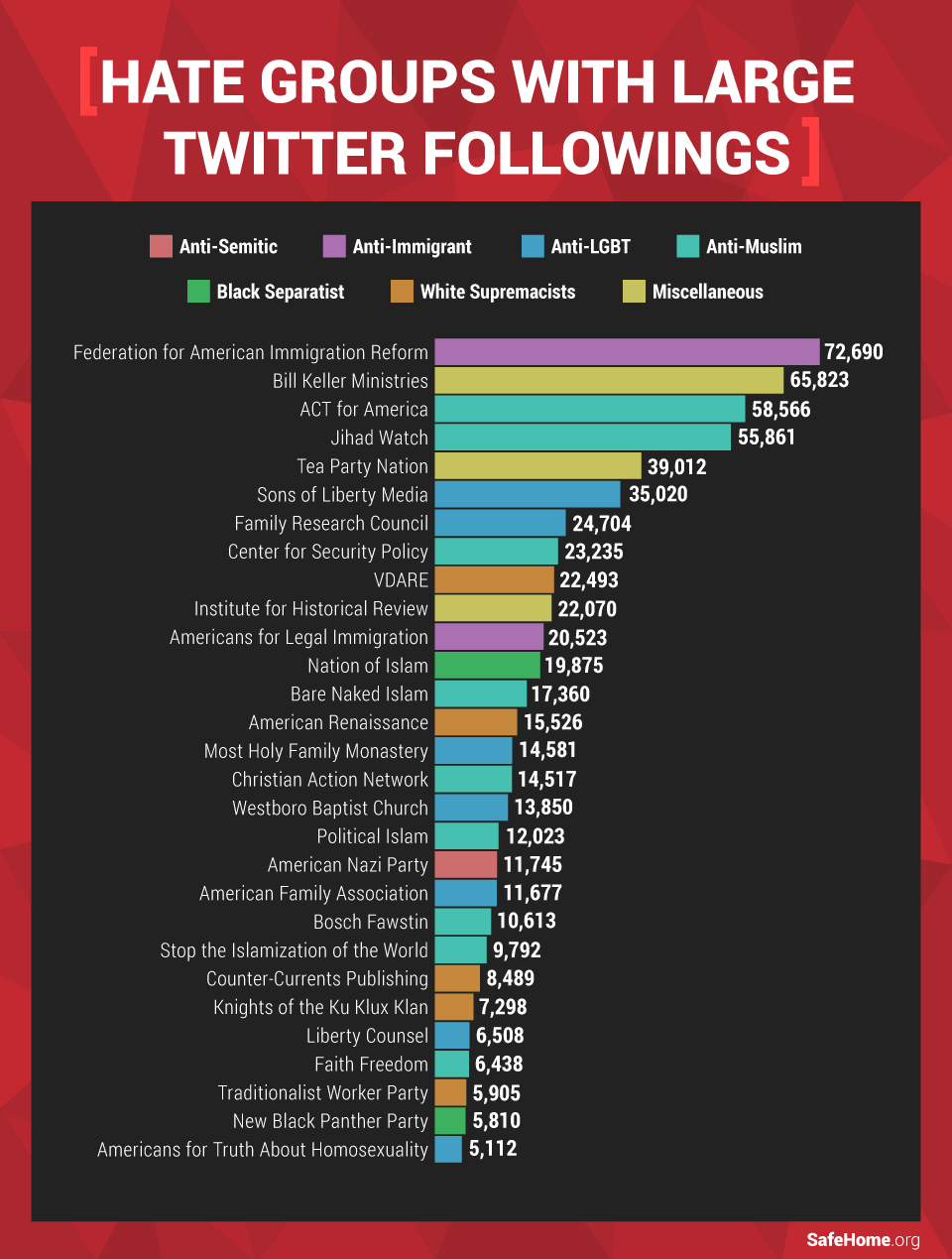 Simply existing on Twitter doesn’t give credence to hate groups’ messages, but amassing followers heightens visibility to their hateful agendas. When we looked at hate groups that had accumulated 5,000 or more followers, we found the Federation for American Immigration Reform (@FAIRImmigration) had the largest number of unique followers on our list.

With over 72,000 different Twitter accounts following them, FAIR identifies as a D.C.-based organization focused on influencing legislation to limit the number of immigrants entering the U.S. In their Twitter bio, they end with the hashtag #NoAmnesty as a way of solidifying their credo.

Driver who shot at Arizona officer was in US illegally, investigators say https://t.co/tdXbky8c8Q via @FoxNews

The Twitter account for the Bill Keller Ministries (@billkeller2014) had more than 65,000 followers, and anti-Muslim groups ACT for America (@ACTforAmerica) and Jihad Watch (@jihadwatchRS) had over 55,000 followers each.

According to the FBI, hate crimes against American Muslims have surged in recent years, following high-profile domestic and international terror attacks. Based on the report released in November 2016, there were over 5,800 total hate crimes in 2015 – a roughly six percent increase over 2014. The violent attacks against Muslims in 2015 reached their highest point since 2001.

Most Popular Types of Hate Groups 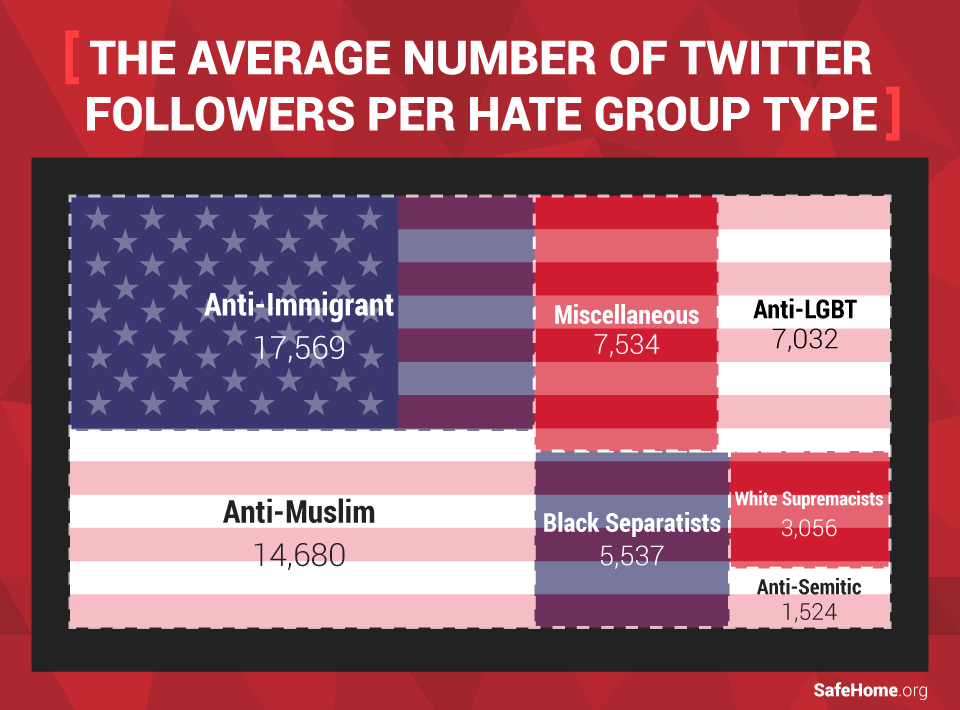 Hate groups with the largest number of followers on Twitter, on average, had an anti-immigrant agenda. As one of the most passionately contested issues of the 2016 election, and one of President Donald Trump’s most repetitious campaign topics, the conversation on immigration and the attitude toward immigrants who may already be residing here in the U.S. has reached a tipping point. 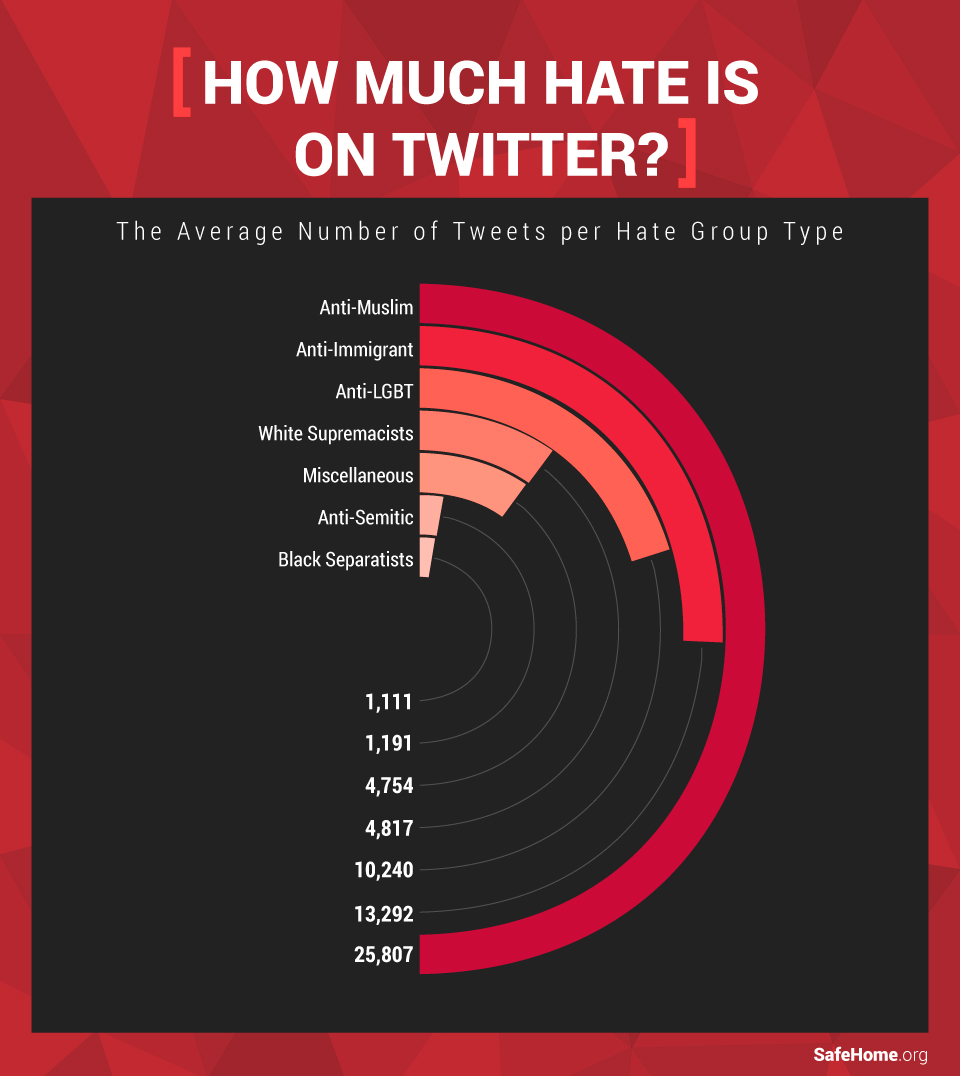 Despite more users following anti-immigrant groups on Twitter, anti-Muslim groups had the highest average number of tweets linked to their accounts.

Of the more than 100 hate groups we were able to track on Twitter, we found that anti-Muslim accounts averaged almost 26,000 tweets and retweets. With accounts like ACT for America and Jihad Watch averaging over 55,000 followers each, the racist tweets targeted toward Muslims accounted for more of the hate group activity discovered than any other category. 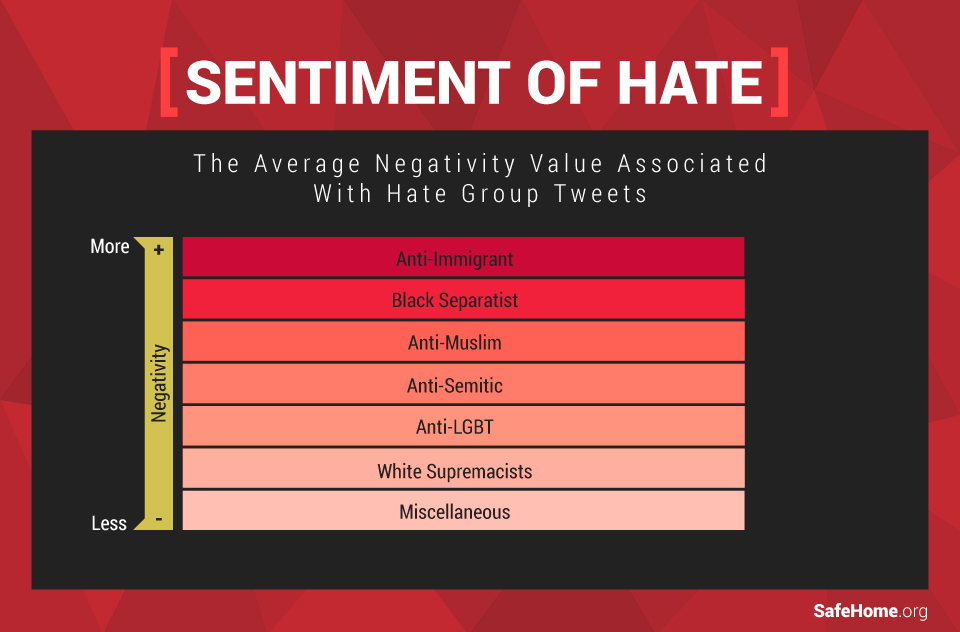 Despite facilitating hateful agendas, some of the groups looked at had more negativity associated with them than others.

While anti-Muslim tweets were deemed less polarizing than some other groups, critics have argued that hate speech toward Muslim-Americans has normalized over the past decade. They suggest that failure to condemn these comments, combined with the divisiveness of the 2016 presidential election (and a rise in hate crimes over the last several years), has helped incite further acts of violence and trends of hate speech toward Muslims in the U.S

We found that white supremacist groups and Miscellaneous communities had the least polarizing comments of any of the hate groups studied. 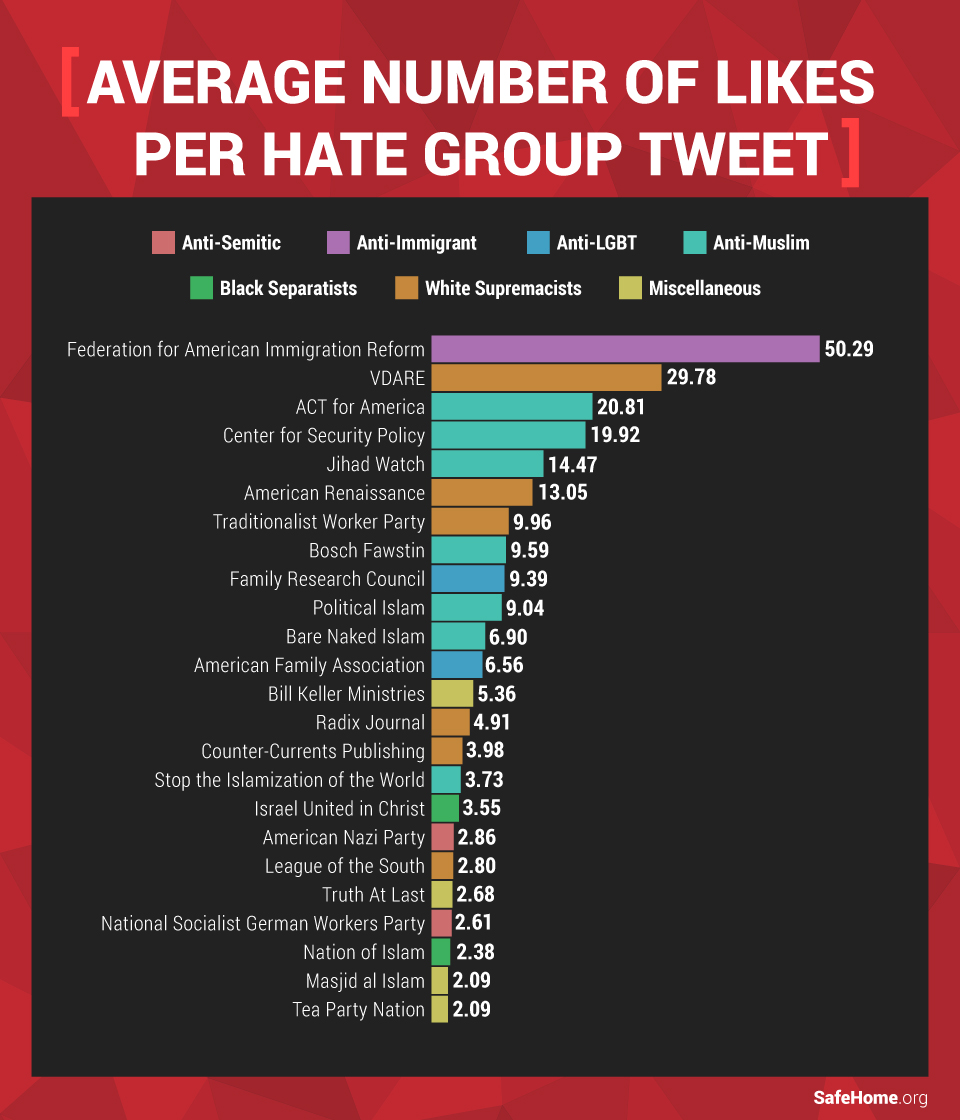 Anti-immigrant tweets were found to be the most hateful, and anti-immigrant group FAIR (Federation for American Immigration Reform) averaged the most likes of any of the hate groups studied, over 50 per tweet. FAIR averaged more than twice as many likes as nearly any other group that we looked at and had the most followers at the time of this publication.

All of these jingocucks demanding war with Russia are the same exact people who absolutely refuse to guard our own borders. 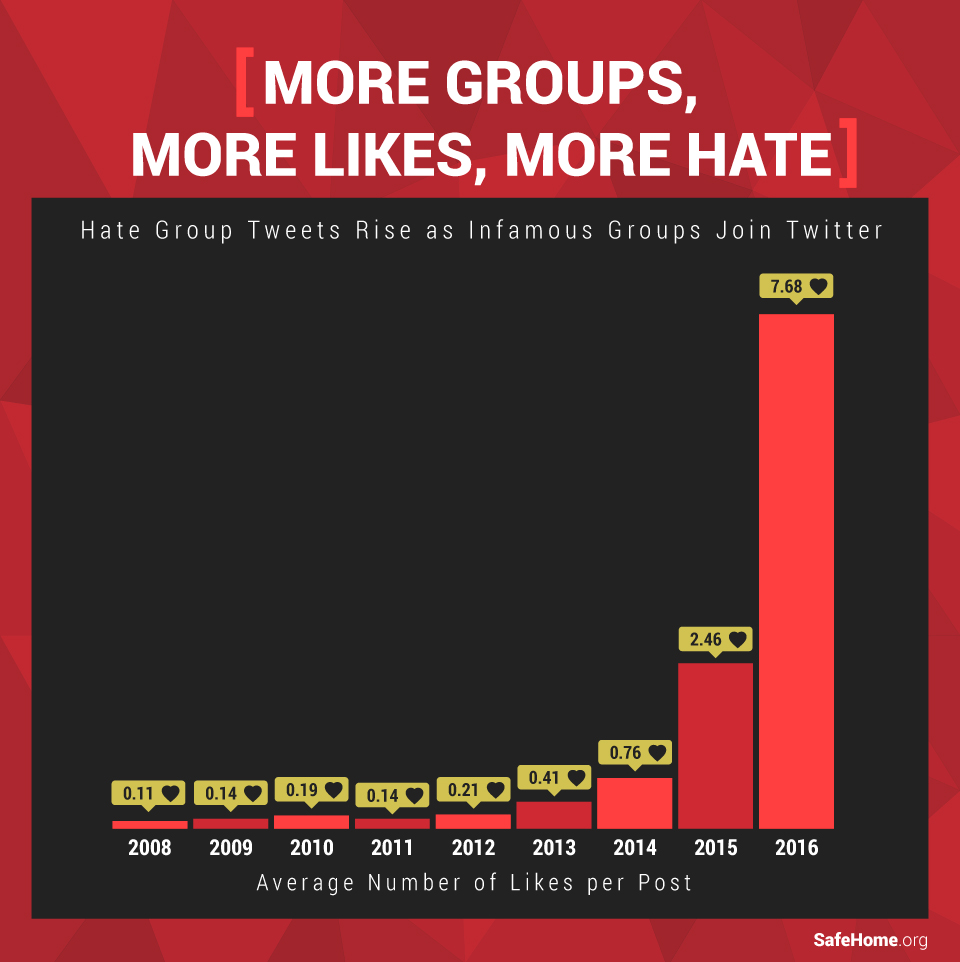 Across Twitter, the presence of these hate groups and attention paid to their incendiary remarks remained relatively steady between 2008 and 2012. A small rise in the number of these tweets liked in 2013 preceded a sharp increase between 2014 and today.

Between 2014 and 2015, the number of likes given to tweets and comments produced by hate groups on Twitter more than tripled. Between 2015 and 2016, the likes associated with these comments more than tripled again. In just three years, the average number of likes on hateful or racist tweets from the groups studied rose from less than one, on average, to almost eight.

Unfortunately, this rise in hate speech on social media has coincided with a rise in hate crimes. In 2015, there were over 7,000 victims of hate crimes in the U.S., and nearly 60 percent of those were targeted due to their race, ethnicity, or ancestry.

The Rise of Hate Groups 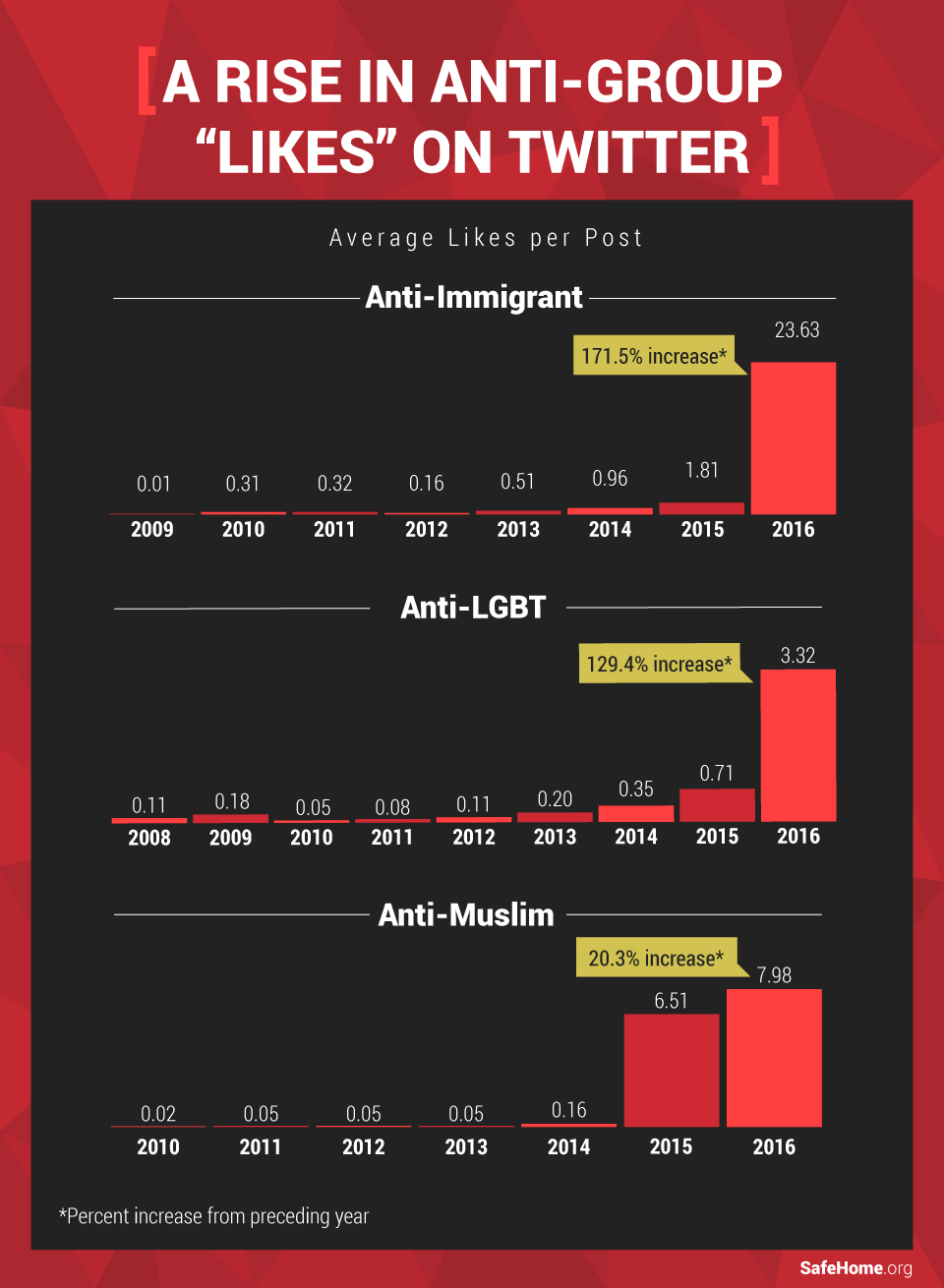 The presence of hate groups on Twitter has been growing since 2008, but between the close of 2015 and the end of 2016, we discovered some of the most dramatic increases in the number of likes of hate groups since Twitter’s founding in 2006.

Anti-Muslim groups (which saw their sharpest increase between 2014 and 2015) grew in likes by just over 20 percent, but anti-immigrant and anti-LGBT groups’ likes grew by about 171 and 130 percent, respectively. Sadly, the U.S. also saw one of its most violent crimes targeted toward the LGBT community in June 2016 when 49 people were murdered in the Orlando Pulse Nightclub shooting. Anti-immigrant Twitter accounts saw the largest increase, particularly in the wake of the 2016 presidential election, where divisive language and attitudes toward immigrants continue to remain a contested topic as we progress through the new year and a new presidency.

Equal rights…liberty and justice for all…THAT is what America is about. THAT is what our ancestors fought to preserve.

For this campaign, we at SafeHome.org tracked down over 100 hate groups operating on Twitter. To define a “hate group,” we sourced https://www.splcenter.org/hate-map, which provided an initial list for us to start our search. These hate groups were then grouped into broader categories defined here and further grouped. See below for the groupings. With this data, we were able to average tweet volume, look at the total number of followers for different hate groups, and find other information related to this corpus of tweets.

If you’d like to raise awareness of the spread of hate groups online, feel free to use the content and graphics above for noncommercial use. We ask that you please link your readers back to this page and provide proper credit.