Few events in modern life are as consistently annoying as receiving calls from telemarketers or, worse, outright scammers. They interrupt movies, dinner, sleep and more, either offering some product or service you have no interest in or attempting to trick you into giving them private information.

A relatively new advent, the National Do Not Call Registry, has helped cut down on many such calls, whether they’re to landlines or mobile devices. Since it went into effect in 2003, Americans have been able to easily opt out of receiving most telemarketing calls, and by the end of fiscal year 2019, the registry contained 239.5 million actively registered numbers, according to data recently released by the Federal Trade Commission, which maintains the registry.

Despite the widespread public awareness (and use of) the Do Not Call list, many Americans are experiencing an increase in annoying calls, particularly robocalls in which a recorded message is played. Complaints about such calls, some of which are exempt from the registry and others that are illegal scam attempts, have increased by nearly 78% since 2015 and now account for more than two-thirds of all Do Not Call complaints.

While Do Not Call registrations have grown, complaints actually fell in fiscal year 2019, though that may be largely due to the federal government shutdown, which took the registry offline for about six weeks. But the trends seen on the national level don’t always hold up when you zoom into the state level, so let’s take a look at where in the U.S. the registry is most popular, where complaints are most likely and what types of complaints are most common depending on where you live. 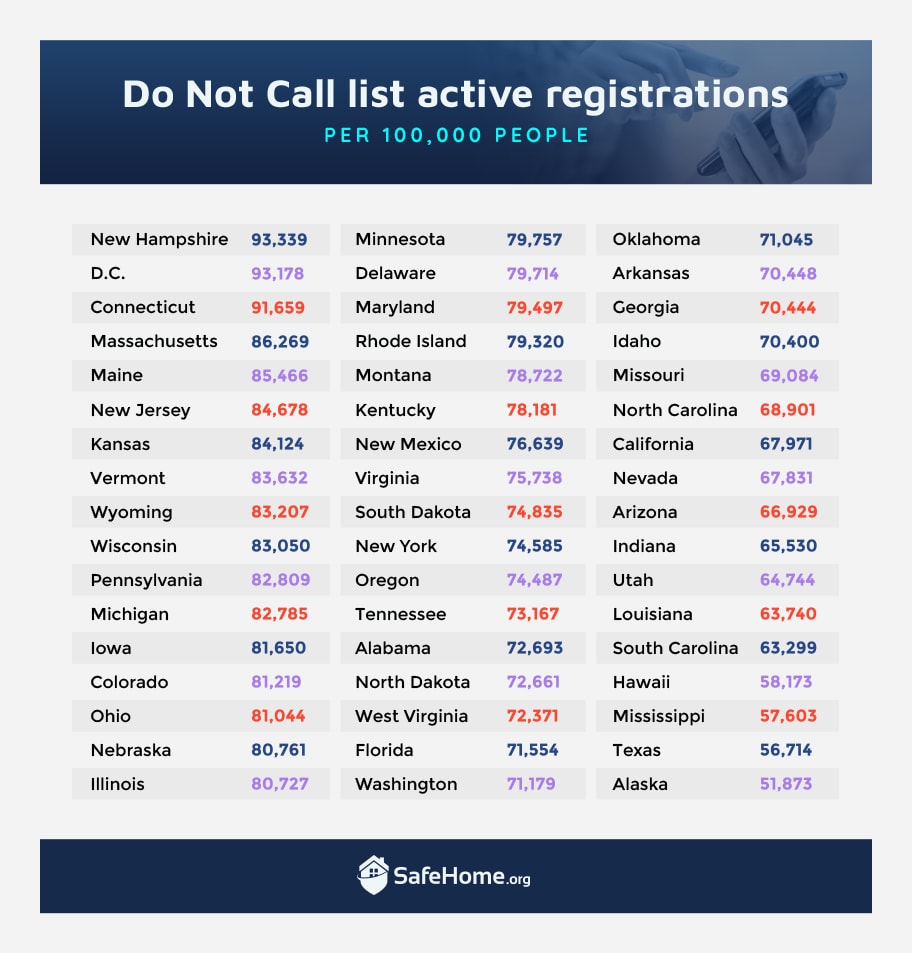 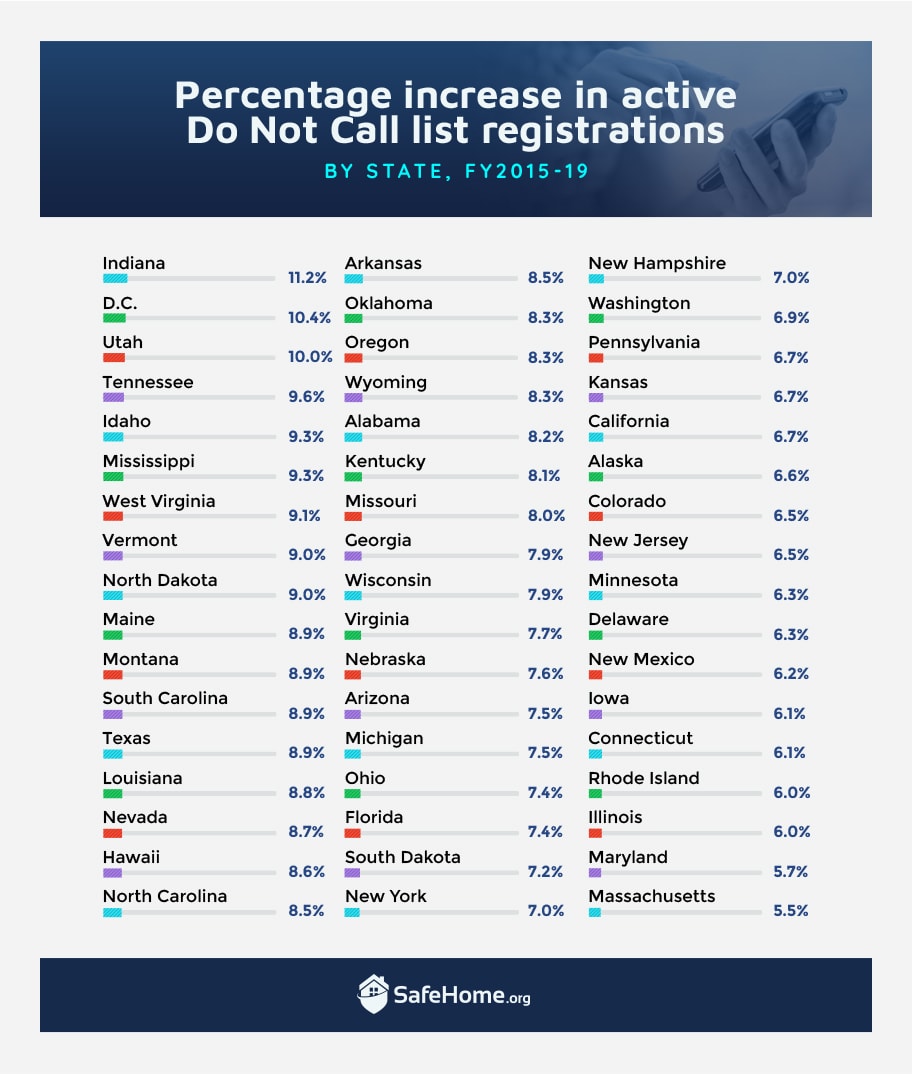 Registering for the Do Not Call list is only one part of the battle to reduce the number of annoying calls you receive. Complaints to the Do Not Call Registry, which can potentially result in criminal charges for those who violate the registry, peaked at 7.2 million in 2017 and have fallen for the past couple of years, though, again, part of the decline recorded in FY 2019 is likely at least partially related to the federal government shutdown, which prevented people from making complaints.

Colorado is the epicenter of Do Not Call complaints, with 2,294 complaints per 100,000 people in 2019, followed by D.C., which also had the second-highest number of registrations per capita. Complaints are the least common in Alaska, just 581 per 100,000. 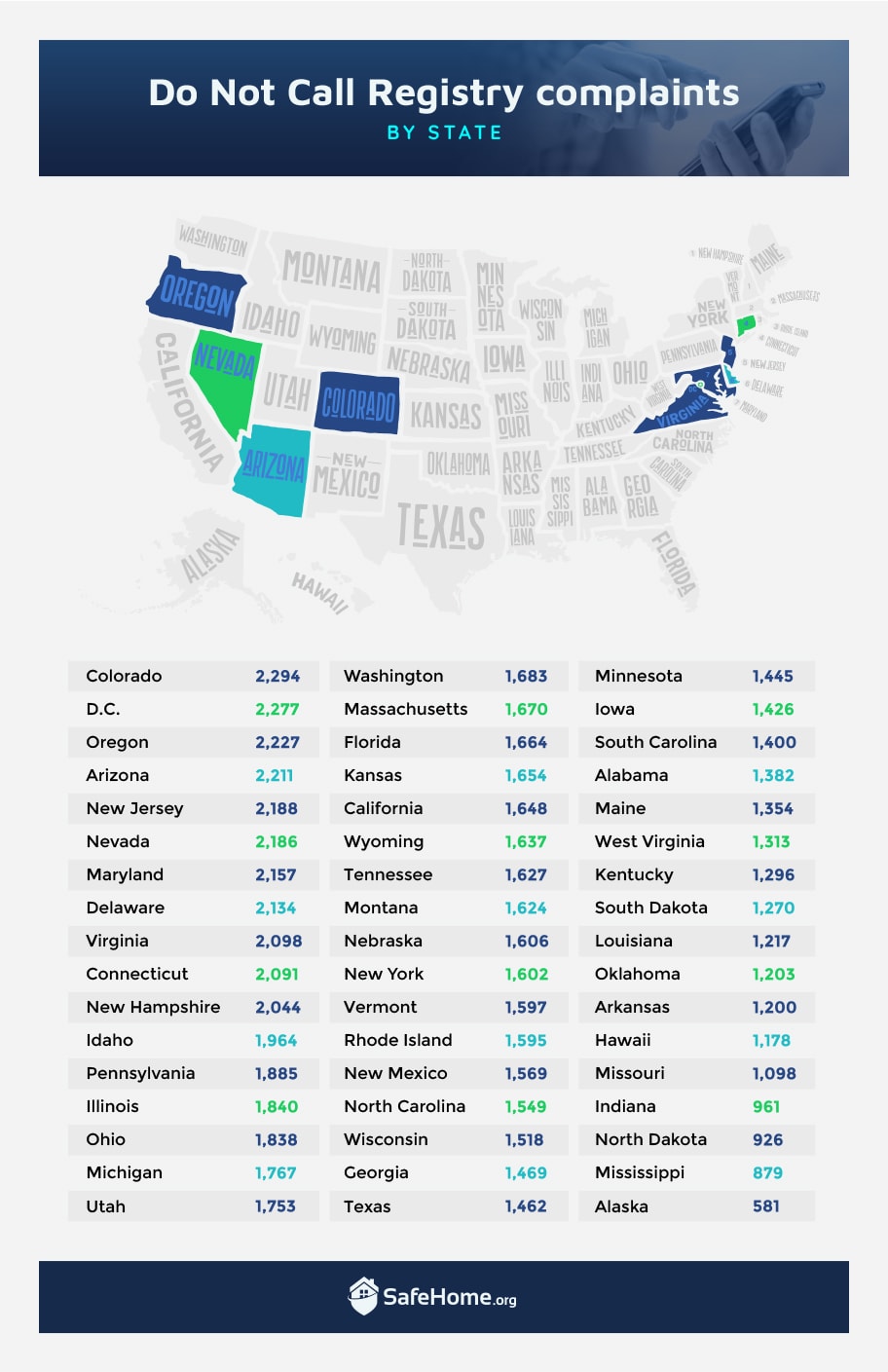 While the nation saw a decline in complaints from 2018 to 2019, they have grown by about 50% over the past half-decade, and most states have seen increases in complaints that are at least that high. No state has seen complaints fall in that time. 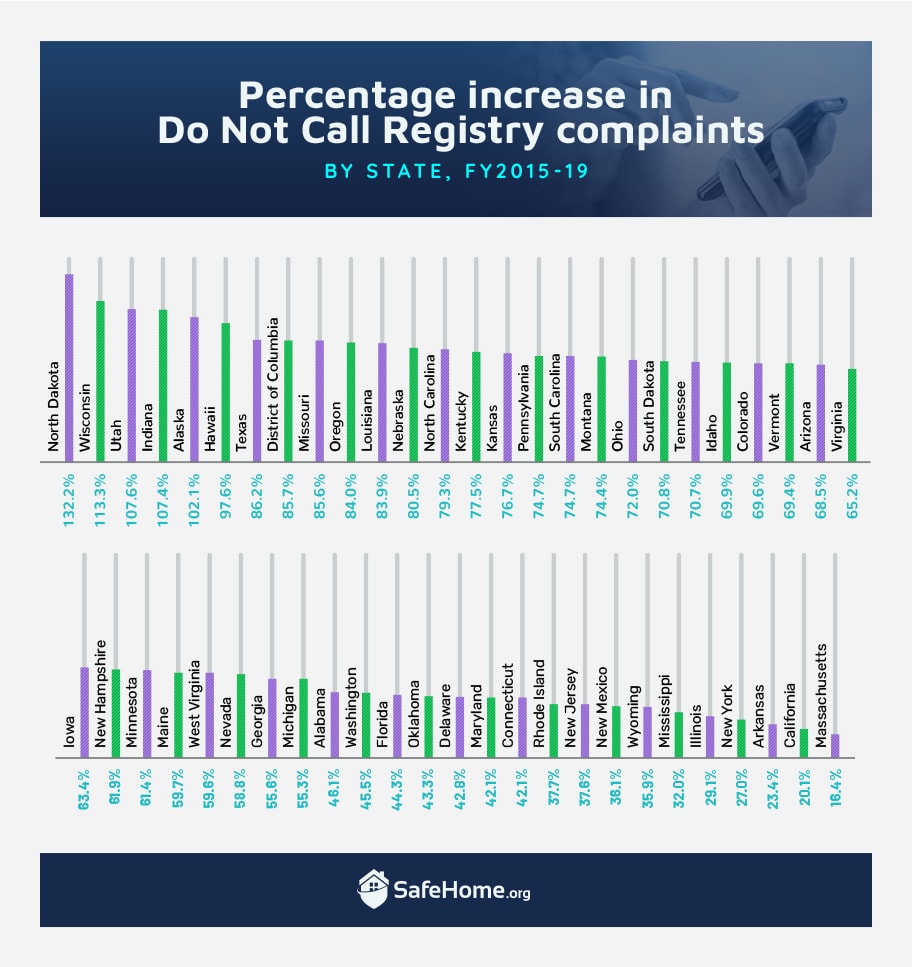 The slowest expansion in complaints made to the registry was in Massachusetts, which saw complaints rise only 16.4% between FY2015 and FY2019, while five states saw increases that were upwards of 100% — North Dakota, Wisconsin, Utah, Indiana and Alaska.

Robocalls, where a pre-recorded message plays when you or your voicemail pick up, have become increasingly common, rising from 59% of all complaints in FY2015 to 70% in FY2019. The ratio of robocalls to live calls has risen despite special attention being paid by federal officials and a 2009 law that explicitly bars robocalls unless the telemarketer has explicit permission to make such calls. Of course, scammers aren’t exactly rule-followers, so for a variety of reasons, these calls remain common — and annoying.

In every state, robocalls represent a majority of complaints made to the Do Not Call Registry, though there is wide variation by state, ranging from a low of 61.2% to a high of about 78%. 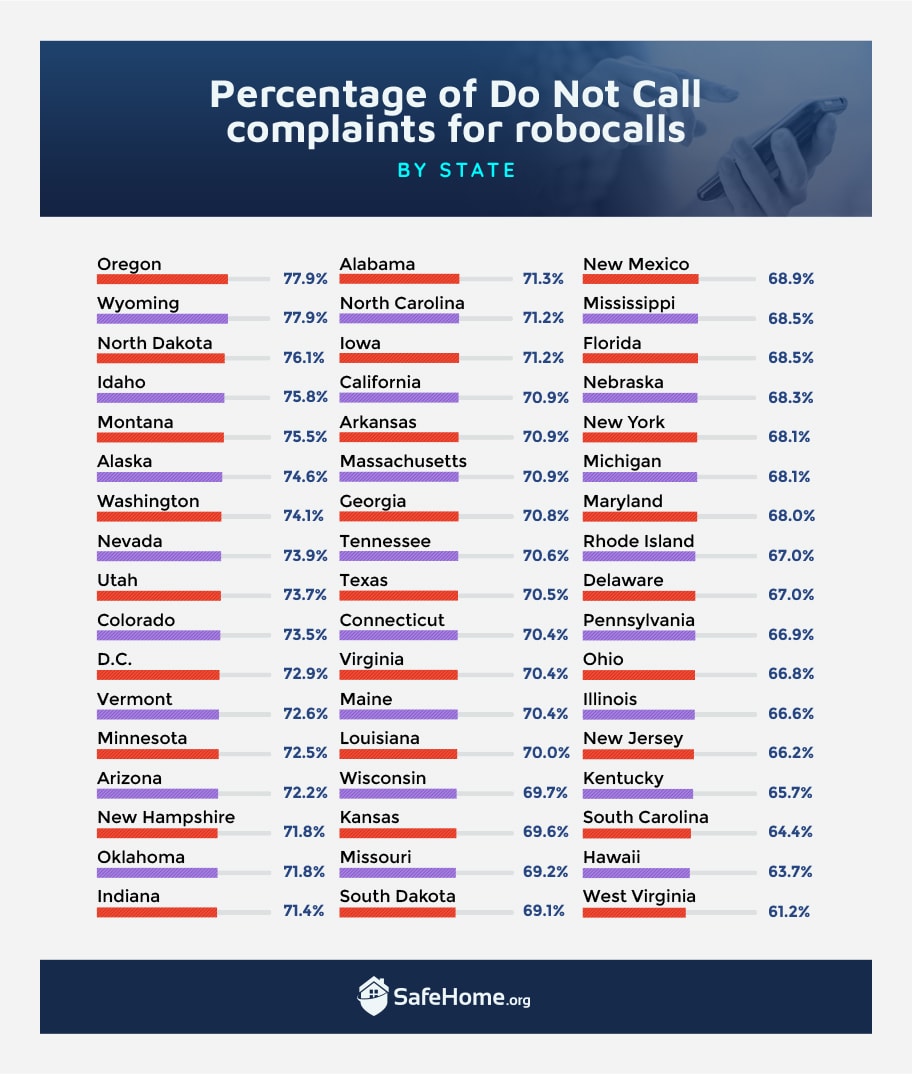 Regardless of the method of the call, the most common type of complaint made to the Do Not Call Registry in FY2019 was for imposter attempts, which includes the ubiquitous IRS call scams, as well as scams related to nanny jobs and alleged family emergencies. These types of calls represent more than 1 in 4 complaints, followed by medical and prescription calls (23.9%) and debt-reduction offers (22.6%), though it’s important to note that not all complainers report the substance of the calls.

As with the number of complaints and registrations, the states produce a great deal of variation when it comes to their mix of complaint topics. For instance, complaints related to energy, solar and utilities are most common Pennsylvania, where they account for 9.5% of complaints (compared to the national rate of 3.1%), while warranty-related calls account for 12% of complaints in Hawaii (vs. 5.9% nationally).

Telemarketers are among the least-respected occupations in the U.S., rating about as lowly as members of Congress, and there’s no doubt illegitimate phone-based scammers are thought of even worse than that. At best, they’re annoying, and at worst, they can ruin a person’s life and empty their bank accounts. In addition to signing up for the National Do Not Call Registry, there are a few ways to keep yourself safe from potential phone-based scams:

The Federal Trade Commission, which administers the National Do Not Call Registry, released data for the past five fiscal years in October 2019, and the data we used came from that most recent release. The fiscal year runs from Oct. 1 to Sept. 30 every year, so FY2019 ended on Sept. 30, 2019.

You can see an FTC publication with that data here, and the raw tables, which we used to calculate the increase in complaints and registrations by state as well as the percentages of call types and topics, can be downloaded here.

Nobody deserves to be victimized by a scammer who takes advantage of the kindness of others. But you can arm yourself with knowledge to avoid being taken for a ride, and you can inform your audience of their risk of falling prey themselves. All the data, analysis and images on this page can be shared with your audience for no charge; if you do share the info you see here, please include a link to the URL of this page to give proper credit.