Secrets in the Home

Sharing a home can expedite intimacy: Nothing says transparency like folding your partner’s underwear. But even among cohabiting couples, there’s significant disagreement about how much to disclose to each other. In one camp, we find the “reveal, don’t conceal” theorists, who feel partners should share as much as possible. Others believe, however, they can spare their partners from pain by hiding certain details and justify their secrecy accordingly.

We surveyed 998 people who lived with their partners about their approaches to telling the truth and living under one roof. The importance of the subject was unmistakable – above communication and even love, they valued trust in their relationships 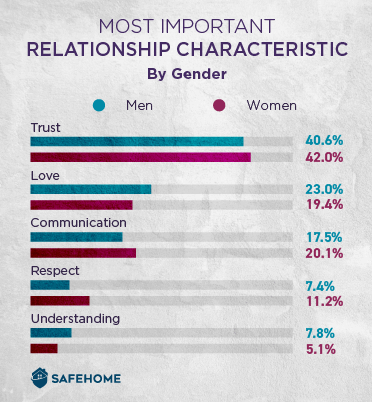 In some ways, men and women expressed different priorities: Men were more likely to pick understanding, while women put a greater premium on respect.

But trust transcended gender differences, surpassing any other value for men and women alike. If so many believe trust is essential, do people actually honor that conclusion with honesty?

We asked our survey participants, diving deep on the secrets they keep from the partners they live with. We found which subjects caused men and women to fudge the truth and the reasons they lied to the people who love them. To see how honest most people really are at home, keep reading.

What We Hide and Why 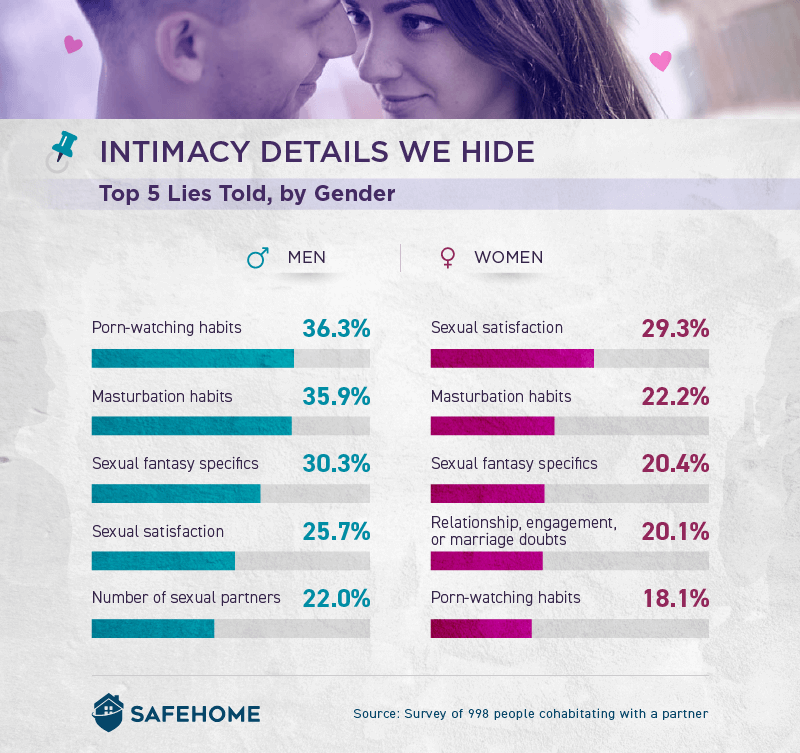 Among women, more than 22 percent lied about their masturbation habits as well. But the top cause of deceit among female respondents was sexual satisfaction. This lie was not limited to women, however: 25.7 percent of men lied about this topic as well. Such deceit can hurt all involved – experts emphasize the importance of communication in keeping sex fulfilling and fun for long-term partners. Healthy communication could also extend to each partner’s sexual fantasies, another top source of secrecy and lies for men and women alike. But if honesty on these sexual topics can be helpful, why do so many of us lie? 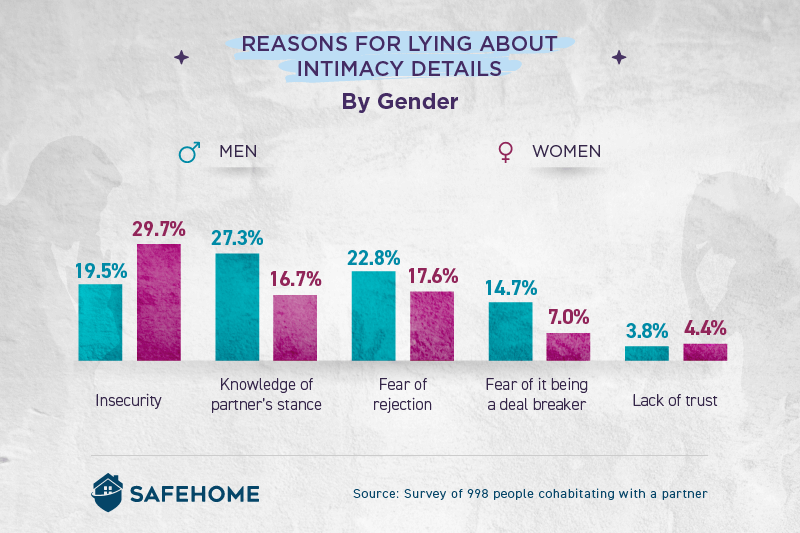 The motives for these lies about sexuality are quite diverse, and no single cause for dishonesty dominated. Among women, the most common reason for lying was insecurity, and nearly 1 in 5 men reported this feeling as well. For men, however, the top reason was the knowledge that their partner would take a disapproving stance. Similarly, men were more likely than women to lie due to fear of rejection: They assumed their partners would not respect their truth and might leave them accordingly. 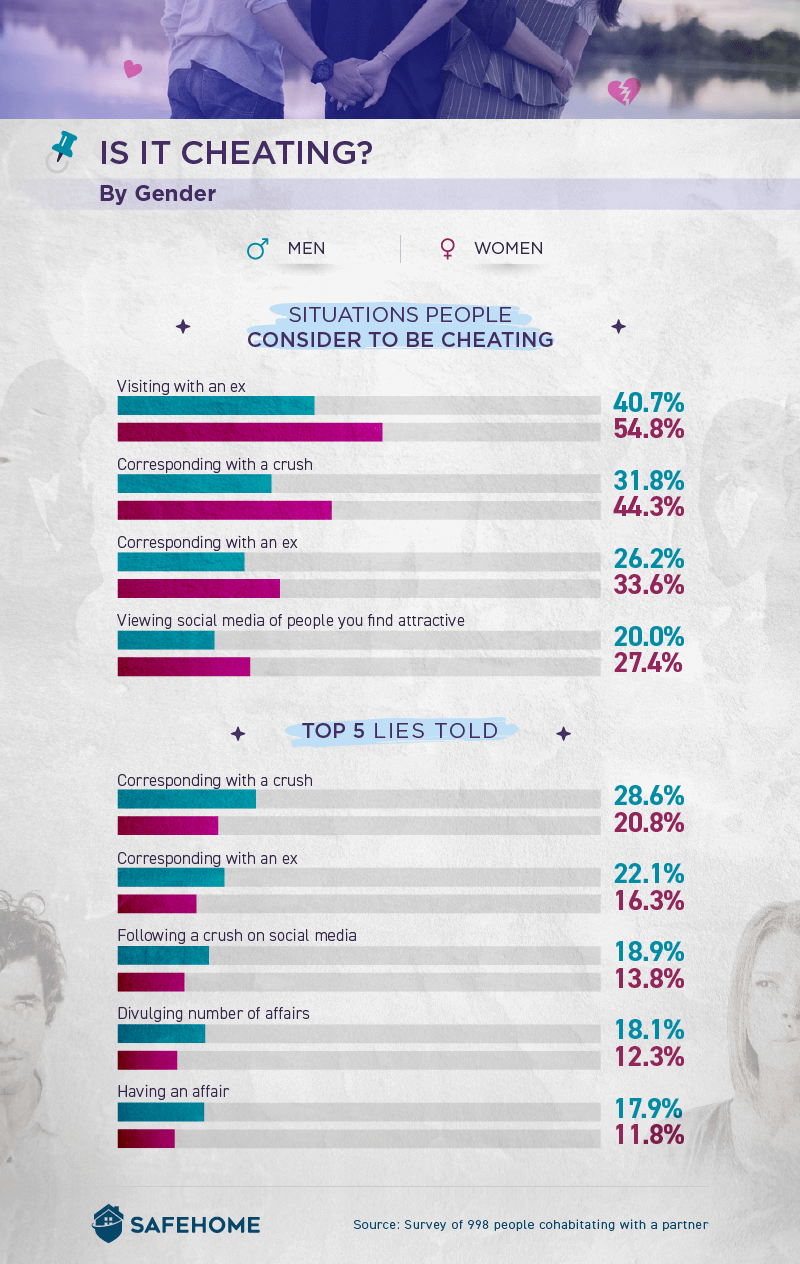 Although the classic definition of cheating entails physical intimacy, many of our participants felt more nuanced betrayals should qualify as infidelity as well. Some felt communication alone could constitute emotional disloyalty, and others said viewing attractive persons’ social media profiles would be unfaithful.

More than half of women and over 40 percent of men said visiting an ex was cheating. In terms of correspondence, however, a larger percentage thought communicating with a crush was more disloyal than talking to an ex (after all, you could just be trying to get your blender back). But if these data imply broad differences in opinion about what cheating means, how many people take actions that could be seen as unfaithful?

Some lies were exceedingly common: Nearly 29 percent of men and almost 21 percent of women were secretive about communicating with a crush behind their partner’s back. More common among men than women, nearly 19 percent of men confessed to lying about following a crush on social media, a habit some experts have termed “micro-cheating.” 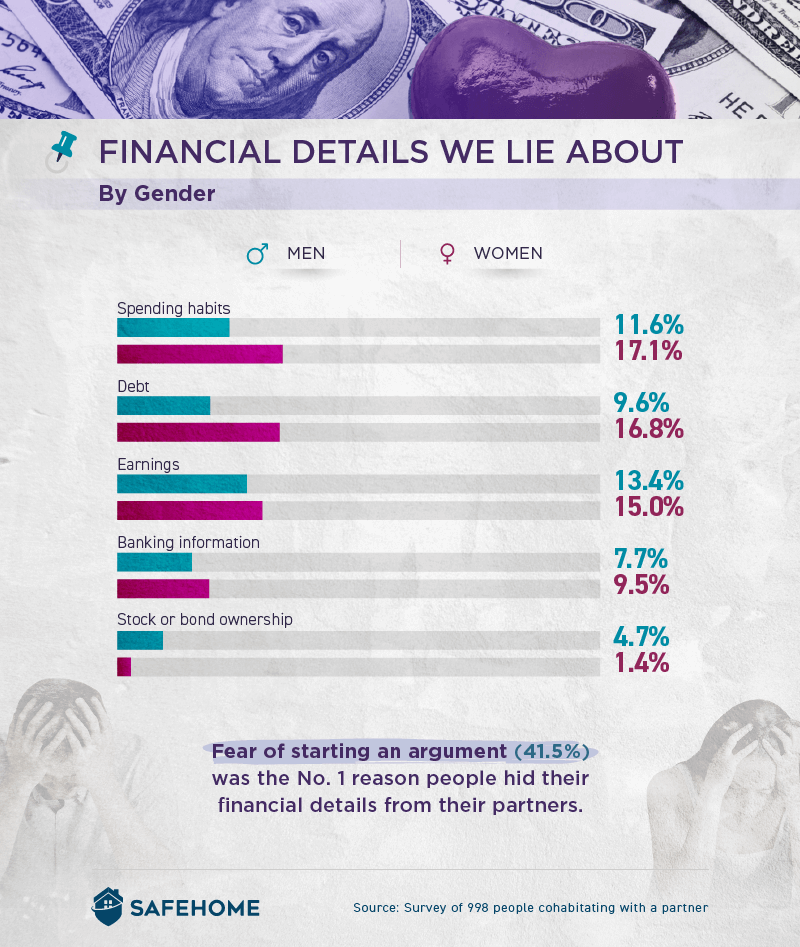 Even if they have romance covered, some couples struggle in another arena in which honesty is required: their finances. Our data show some fiscal falsehoods were relatively frequent – and lying to their partners about their spending habits was the most common financial fib between couples. The leading motive for financial dishonesty was fear of conflict: 41.5 percent who deceived their partner about financial details did so to avoid an argument. Emotions can certainly run hot during pocketbook arguments: One recent survey found 68 percent of Americans said money provoked more tension with their partners than sex.

Lies about debt and income were other common financial misgivings between some partners, a trend that was more common among women polled than men. Relationship and financial experts agree debt dishonesty can cause real problems in the long run, especially once a couple decides to get married.

Concerning secrets rather than outright lies, 7.7 percent of men and nearly 10 percent of women kept banking details from their partners. Some experts say separate accounts can be a healthy solution for spouses who prefer some financial autonomy, so this secret could be beneficial in some cases.

Trust and Safety at Home

Few people aspire to be dishonest in their romantic relationships – especially once they move in with their partners. But even if we proceed with the best intentions, dishonesty can take root in cunning ways. Small lies require more dishonesty to prevent their discovery, and petty fibs can bloom into full-blown deceit. There’s a reason that relationship experts call it “rigorous” honesty: To build or restore trust, discipline and effort is required.

Our data reveal secrets and lies often arise in romantic relationships. But there’s an upside to our findings you shouldn’t ignore: If your instinct is to hide unflattering facts about yourself, you are not alone. Perhaps these results will encourage us to fight through fear and shame and be a bit more honest with those we love. If our findings are any indication, they’ve probably got some baggage to share with you as well.

We collected data from 998 people in relationships who live with their partners. Approximately 61 percent of participants were women, and 39 percent were men. Participants ranged in age from 18 to 73, with a mean of 36.4 and a standard deviation of 10.5 years. Demographic groups with less than 20 participants were excluded from individual analysis.

You’re welcome to use or share this content how you see fit for noncommercial purposes (particularly to start a conversation with your spouse or partner). If you do, however, please link back to this page to credit us fairly. There’s no reason to keep your source a secret.