More than half of U.S. adults are afraid of illness, violence, saving for retirement, and government corruption

There’s little dispute that 2020 was a difficult year full of extraordinary events that struck fear and anxiety into Americans’ hearts. A raging pandemic and economic recession followed by a contested election that spurred a dramatic insurrection were just a few of the incidents that left tensions high nationwide.

We wanted to gauge how Americans have handled the stresses of recent months and identify the greatest fears left in their waks. Research into the experiences of more than 2,000 people revealed their top concerns and the lingering impacts of anxiety more than a year after the start of the pandemic.

Overall, health issues and public violence emerged as the most pressing worries, with financial strain, distrust of government, and environmental concerns looming alongside standard fears like crime, slimy creatures, and car crashes. The comprehensive study revealed:

The Most Stressful Year on Record: An Overview

2020 has been labeled the most stressful year on record, and the American Psychological Association said rampant anxiety has become a national mental health emergency. Our research indicates the situation has not yet significantly improved.

Only 29 percent of respondents felt their daily anxiety has lessened from 12 months ago, while 45 percent say it has increased. That stress has made itself known in American sleep patterns, which remain severely disrupted: 39 percent saying they lose sleep at least once a week.

To identify which factors fueled this anxiety, we asked participants to record their level of fear in relation to 41 different issues across seven categories: health, relationships, finances, politics, environment, crime, and other fears. We compiled their responses into a fear index measuring average apprehension on an ascending scale between one and 100, indicating the highest level of fear. 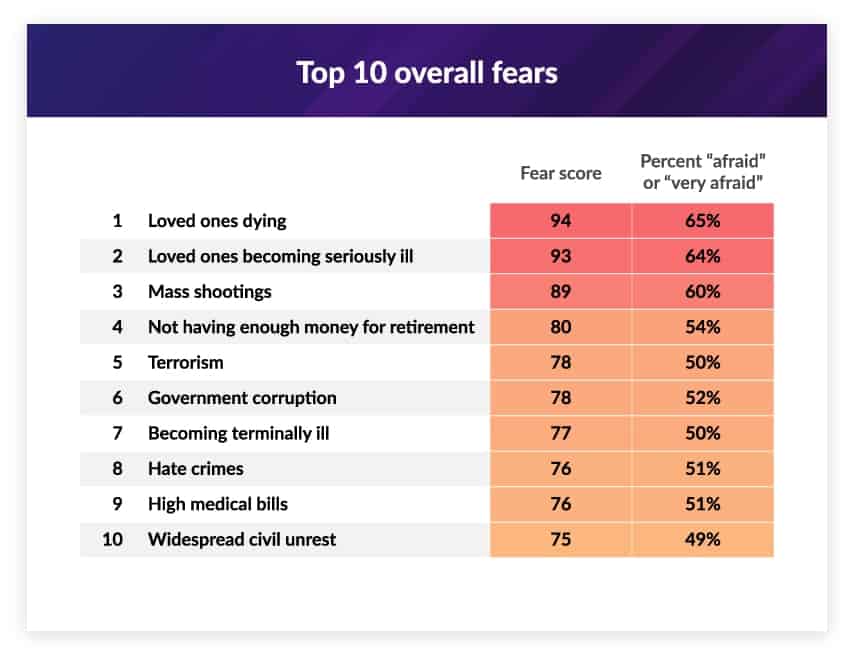 We’ll compare the top fears in each of the categories above, and explore differences between various demographic groups. A full “fear index” is also available in the appendix.

Relationships: Americans Fear Death of Their Loved Ones as Well as Political Division

With over 600,000 U.S. fatalities attributed to a virus that shattered families and locked down communities, it’s unsurprising that relationship matters have recently dominated Americans’ fears. 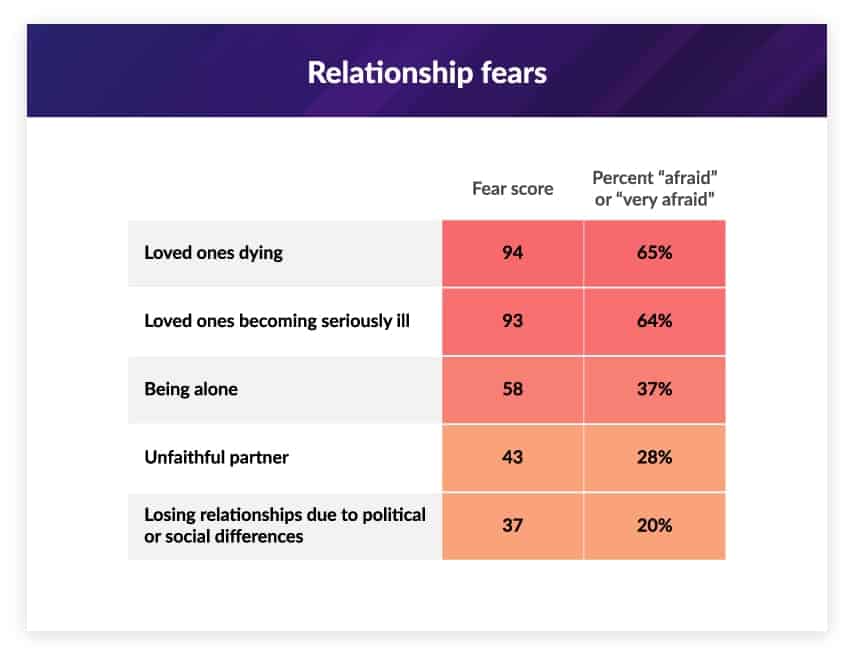 One in five Americans also reported that they were afraid that political differences might burn bridges between their family and friends. Differences in opinion over presidential candidate choice and vaccination have created strife in the most loving of families over the past year. Others have been cut off from loved ones due to extremist views with growing frequency, a relatively new phenomenon in the United States.

Politics: Terrorism, Communism, and Fascism Are Causes for Concern

Hate crimes and police brutality led to widespread protests, which provoked calls for law and order. An attack on the U.S. capitol, which had not occurred since 1812, also likely created new political fears. This series of events created compounding unrest and unease about public safety and stoked fears among Americans. 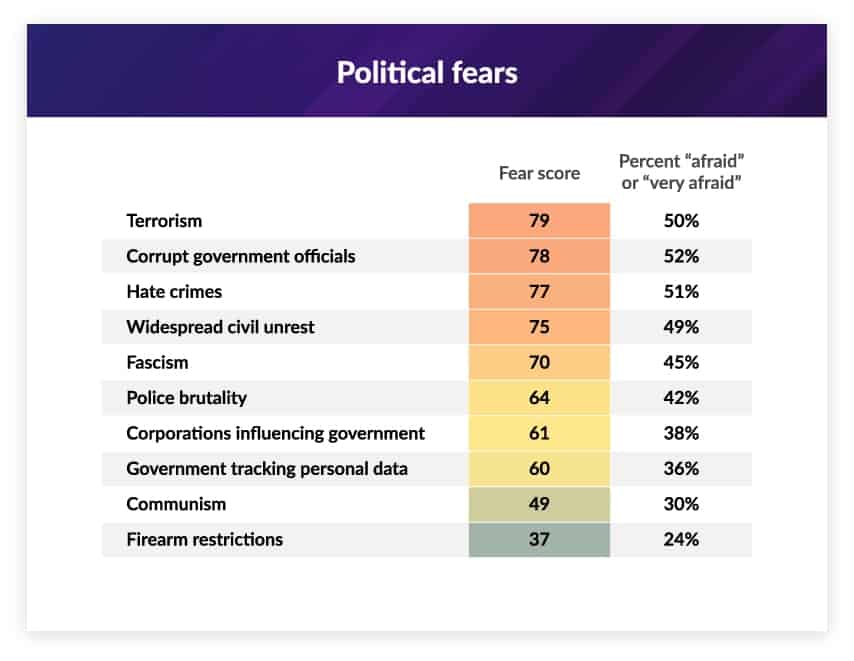 While overall results showed political and governmental worries to be generally widespread, a closer look revealed that specific fears often varied widely across the political spectrum.

Given the nation’s wide political divide, it wasn't surprising to find statistical differences along ideological lines, but when we isolated answers between liberals and conservatives, it sometimes felt like looking at two separate studies. 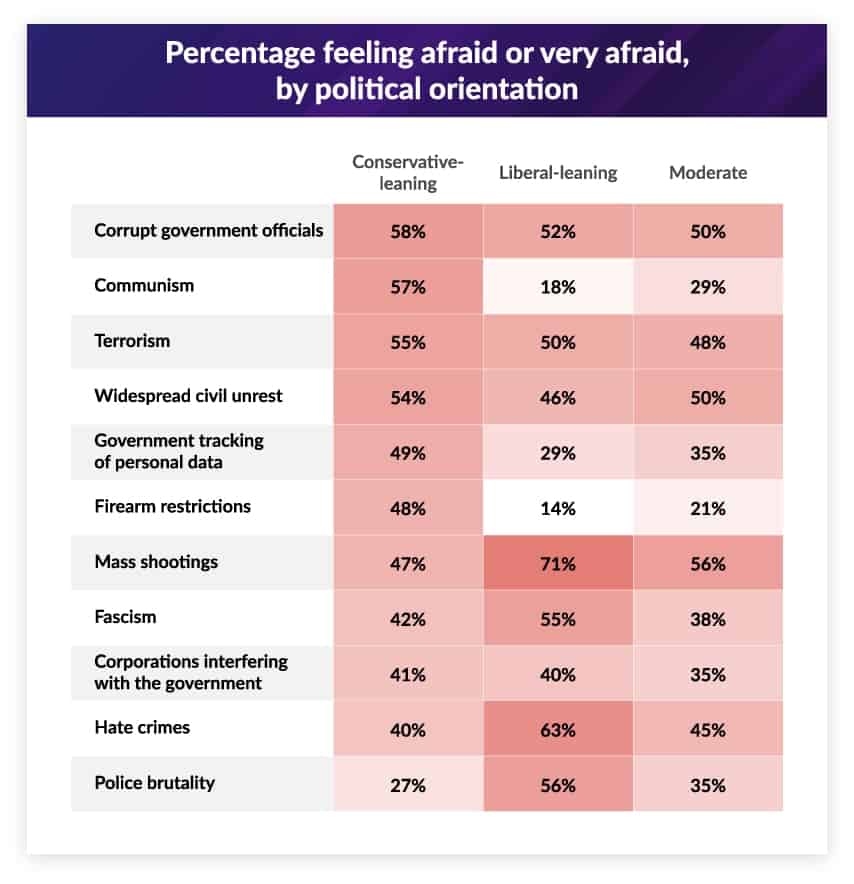 Americans on both sides of the fence shared concern about civil unrest, undue corporate influence, and terrorism. Left and right were also similarly concerned about government corruption, but the form that corruption took was very different depending on personal ideology.

Conservatives were particularly concerned with the threats of communism, firearm restrictions, and governmental tracking while liberals were more likely to hold fears of police brutality, hate crimes, and fascism.

These divergent concerns may be fed by contrasting information bubbles, especially on social media, painting starkly disparate views of the world.

The recent economic recession wreaked havoc in a variety of ways. Lockdowns shuttered businesses and caused widespread unemployment, a stock market crash highlighted the volatility of savings, and hospitalization costs reminded Americans how easily illness could bankrupt them. These situations were likely on Americans’ minds as they considered their top financial fears. 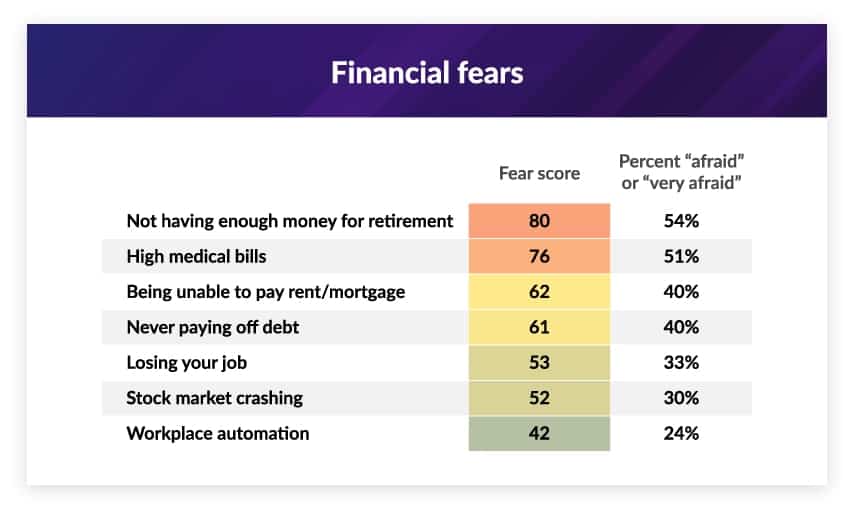 Though economic setbacks sent ripples of insecurity through many layers of society, the level and focus of financial fears was also influenced by wealth. Those earning less than $50,000 per year reported fear scores significantly higher in areas of everyday monetary challenges, while individuals with bigger paychecks were noticeably more concerned about stock market performance. Additionally, women were more likely than men to report feeling afraid of retirement savings: 59 percent of women felt this fear, compared to 49 percent of men.

Crime: Mass Shootings Down in 2020, but Fear Remains High

Mass shootings, which decreased during pandemic lockdowns, were still the most feared crime and the third overall fear. Identity theft was the second-most feared crime, reflecting the expansion of cybercrimes associated with the movement to remote working. Although more people were spending time at home, robbery and burglary still caused worry, with an average score of 61 out of 100. 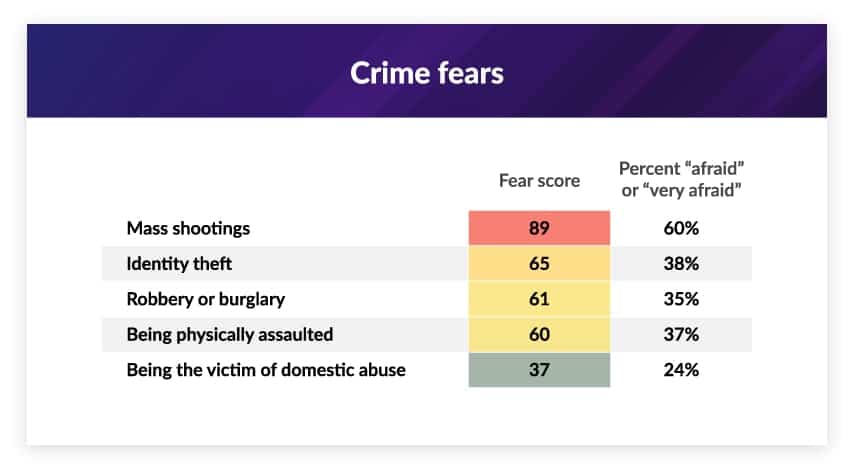 Across the board, women reported greater fear than men when it came to crime issues, especially regarding mass shootings and physical assault where the gap in fear scores exceeded 20 points. 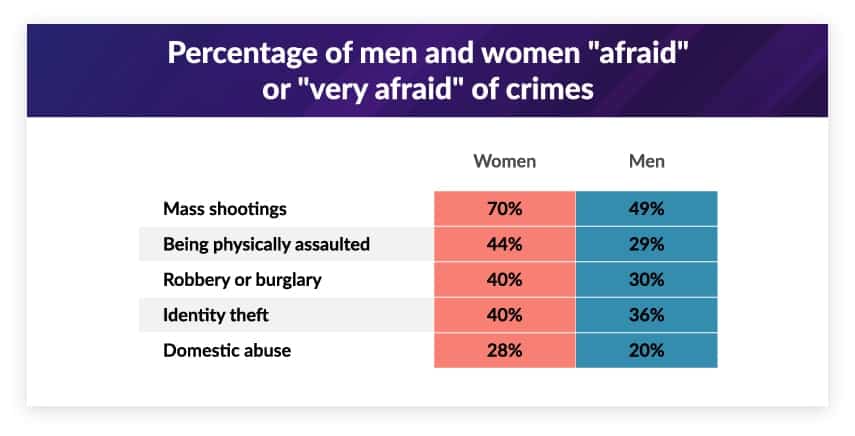 A year dominated by a virus, a recession, and political unrest left American anxieties running high. Medical concerns, financial worries, and deepening political distrust were our most prominent fears, all tied to dire current events.

There are signs of hope on the horizon since the darkest days of last year: the invention of Covid-19 vaccines, an improving economy, and a peaceful transfer of presidential power. What remains to be seen is whether these positive steps will quell our fears, bring us together, and allow Americans to sleep peacefully.

We asked 2,083 US adults about their fears. Their response choices were “Not afraid,” “Slightly Afraid,” “Afraid,” or “Very Afraid” across 41 fears in the survey. These choices were used to create a Fear Score for each topic.

Fear Scores were determined by ascribing a value from 0 (Not Afraid) to 3 (Very Afraid) for each response and then representing the total score for each fear as a percentage of the total value had every respondent had answered “Afraid” (Nx2).