Firearm legislation is a much discussed issue these days, and there are many opinions that surround it. Statistics can even be unpacked to adhere to certain viewpoints on the topic. For example, the U.S. has the highest rate of gun violence when compared with Western Europe, but falls around the median when compared with countries in North and South America.

Similarly, some states have more issues with firearms than others. The South, in particular, is a consistently high-risk area for firearm violence, while California and much of the Northeast have per capita rates that pale in comparison. However, some states with strict gun laws, such as Illinois, can still have significant rates of gun deaths, while states with extremely lax gun legislation, such as Arizona, aren’t quite as high on the list as you might expect.

Knowing the facts about firearms, crime trends in the U.S., and the effectiveness or ineffectiveness of gun legislation are a vital part of staying safe and informed. Continue reading to see the relationship between gun laws and gun deaths in the U.S.

Firearm Ownership in the U.S. 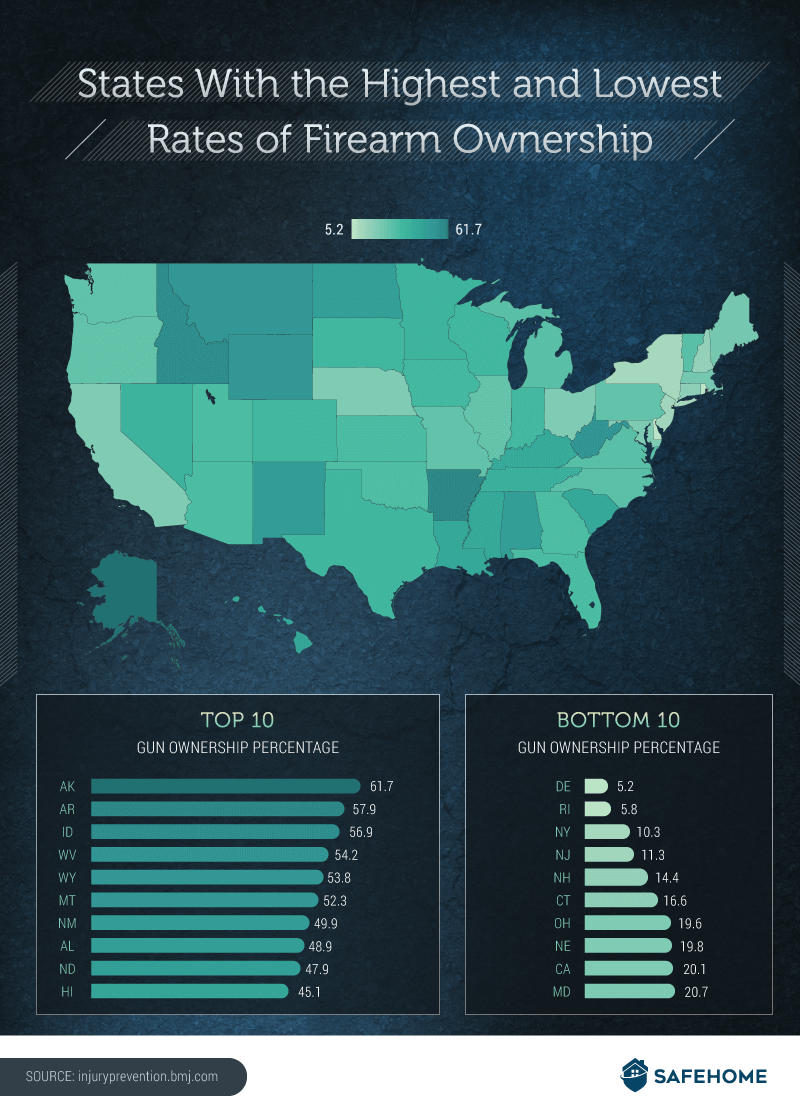 While it’s true there are about as many guns in America as there are people, not every resident possesses a firearm. In fact, one-third of U.S. residents are gun owners. However, it bears mentioning gun ownership is more concentrated in some areas of the country than others.

Alaska has the highest rate of gun ownership in the U.S., with nearly 62 percent of adults owning a gun. Arkansas and Idaho have the next most gun owners (58 percent and 57 percent, respectively). The most salient reason behind firearm ownership is the prevalence of “gun culture,” or the acceptance of firearms by friends, family, and associates. 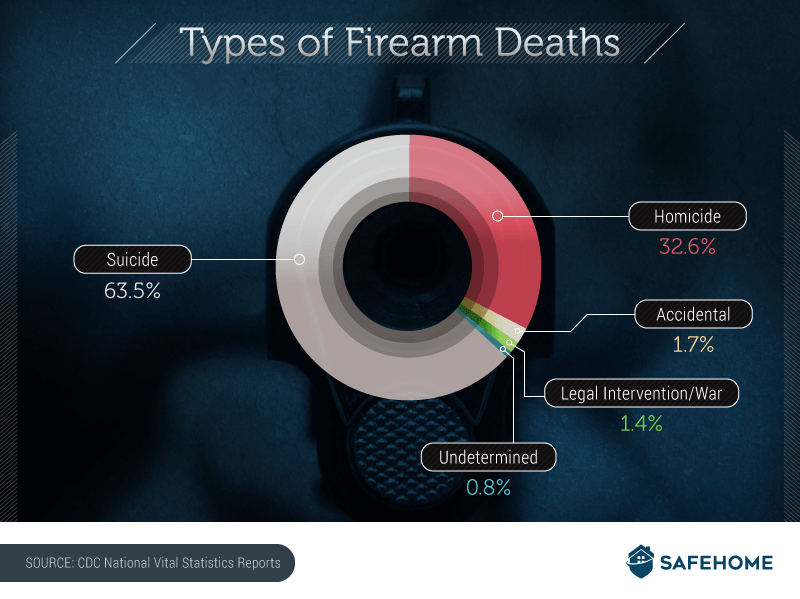 While firearm homicides are a major cause for concern, suicide by firearm makes up almost two-thirds of all gun-related deaths in the U.S. In fact, the number of firearm homicides has been on a general decline since 1993, while firearm-related suicides have increased in recent years.

Broken down, about 36,100 people die from firearms each year in the U.S. Suicides make up over 21,300 of those deaths, while homicides make up nearly 11,000. Legal intervention and accidental discharge of firearms are each responsible for roughly 500 deaths annually.

For every category except suicide, victims are, on average, between the ages of 15 and 34. While victims of self-inflicted gunshot wounds are usually between the ages of 45 and 64, the rate of suicide is relatively high for all involved age groups compared with other categories of death by firearm. 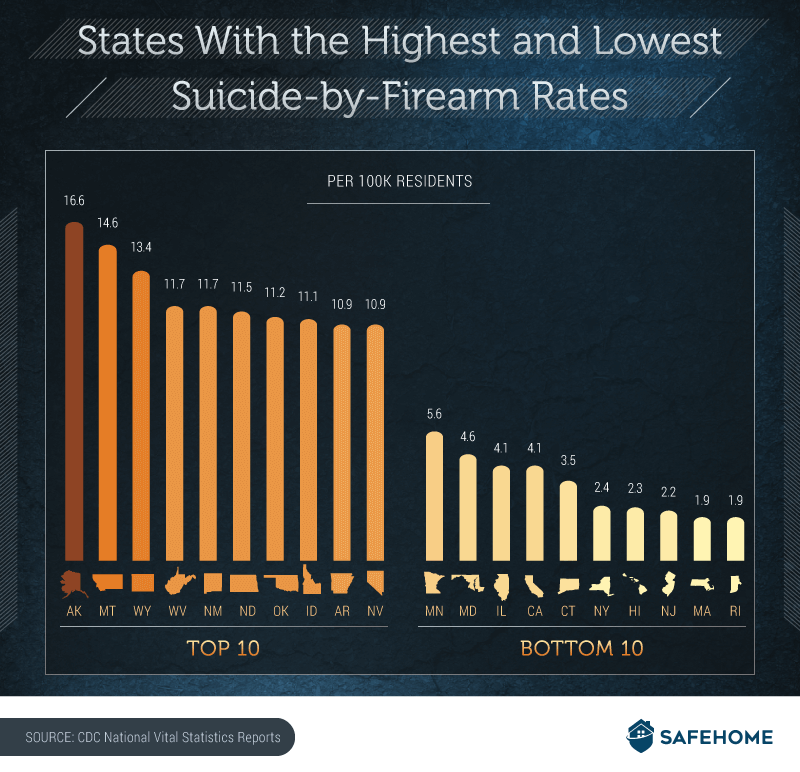 Suicide is the most common cause of death by firearm. There appears to be a correlation between suicide by firearm and the rate of gun ownership.

Alaska may have the highest firearm suicide rate because of its Alaska Native population. The suicide rate among Alaska Natives was about three times that of non-native Alaskan residents from 2003 to 2006. However, factors used to explain Montana’s high rate of suicide – including isolation and alcoholism – may apply to other states as well. Alaska, Wyoming, and Montana also have the lowest population density.

Alternatively, Rhode Island, Massachusetts, and New Jersey have the lowest firearm suicide rates and are the top three states regarding population density. 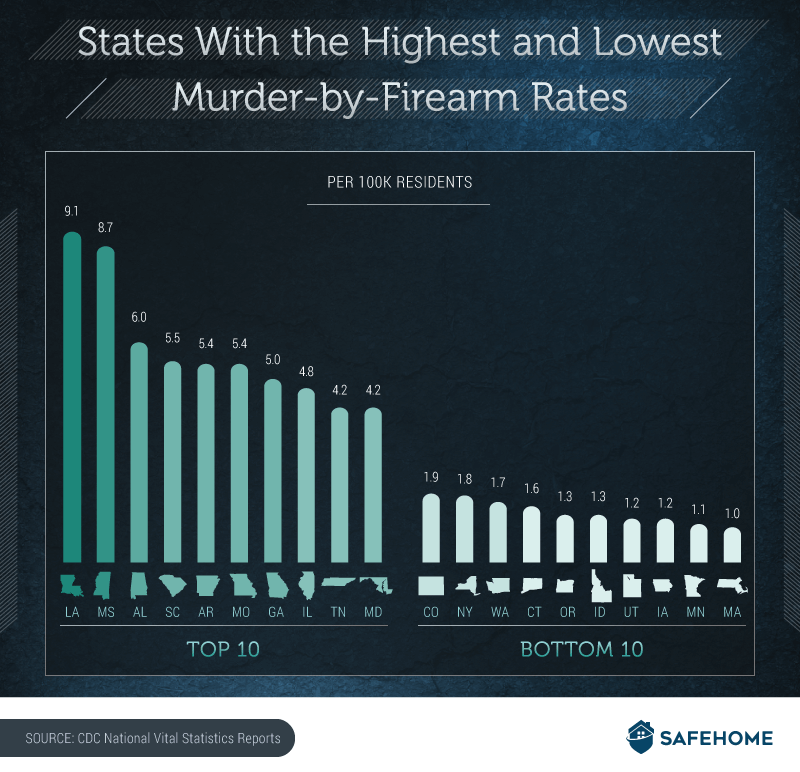 Homicide makes up about one-third of all firearm-related deaths. Firearms were used in nearly 72 percent of murders nationwide in 2015. Additionally, Louisiana and Mississippi have disproportionately high firearm homicide rates. Notably, most of the bottom 10 states for firearm homicides, except New York and Connecticut, are in the bottom 10 for gun ownership.

A Decade of Firearm Deaths 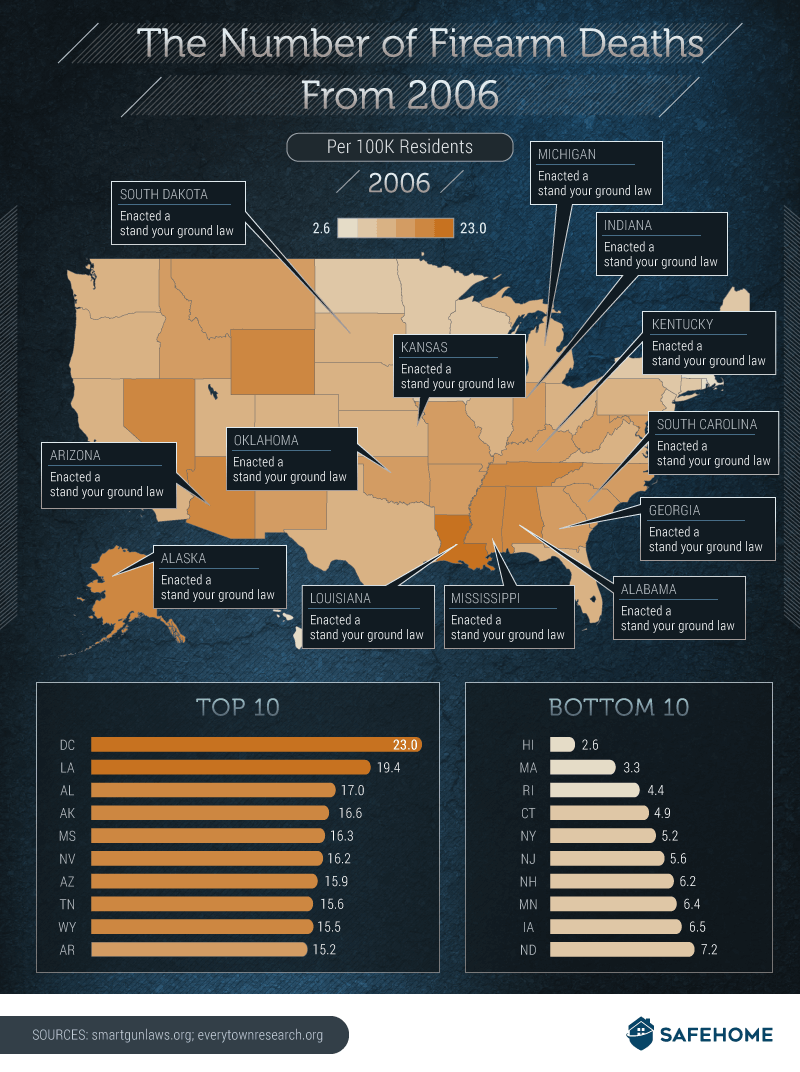 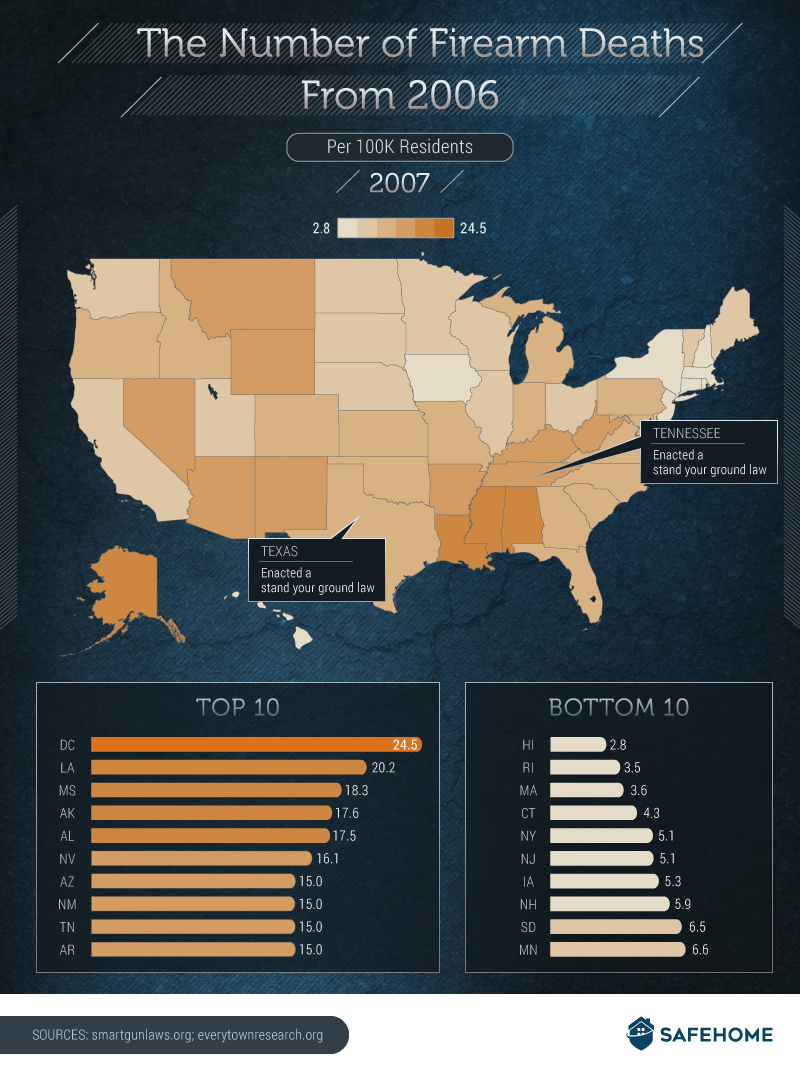 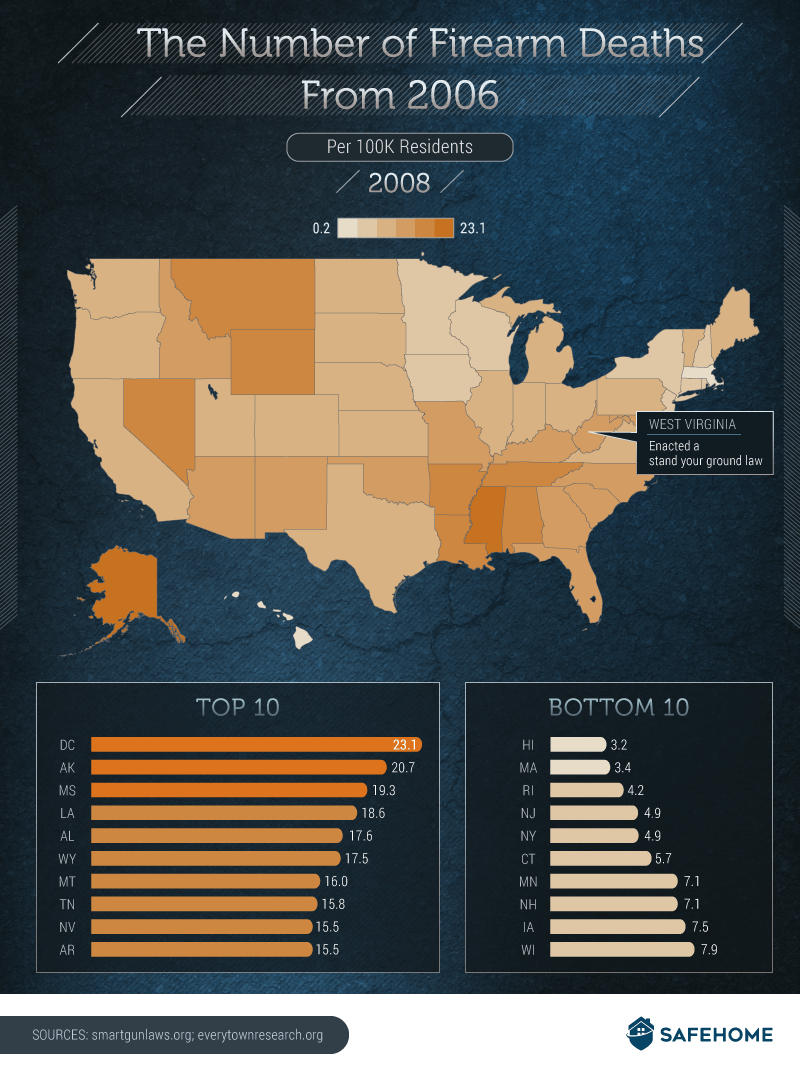 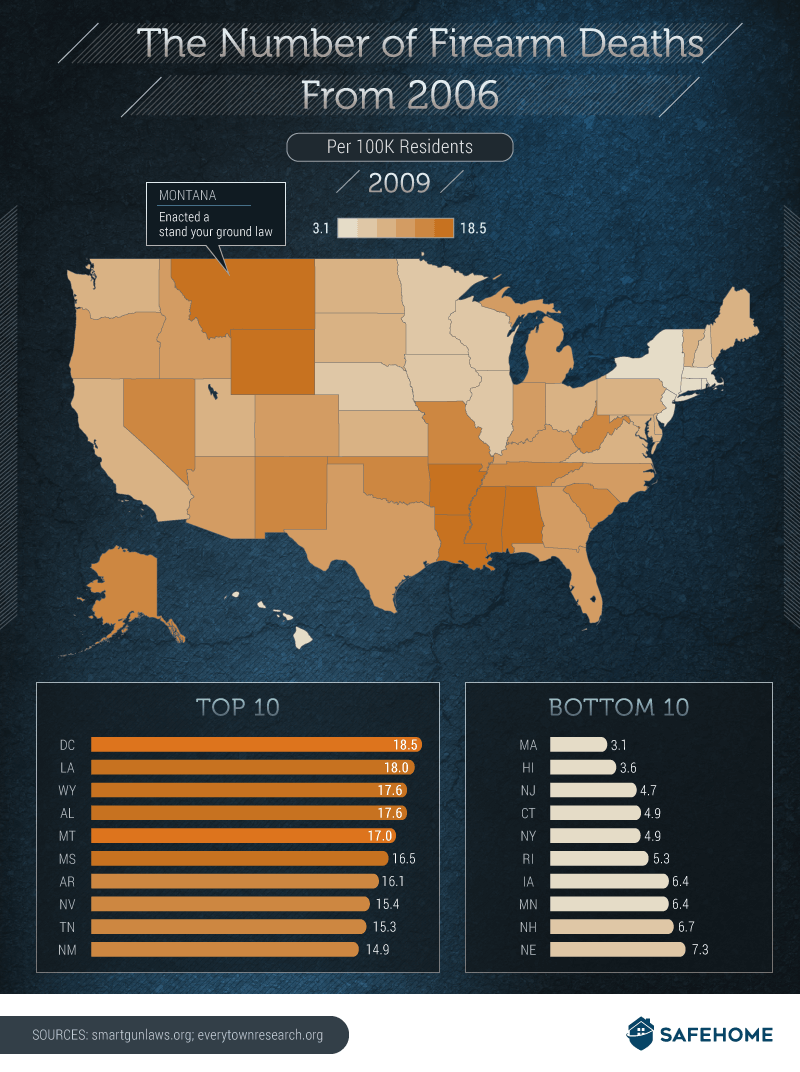 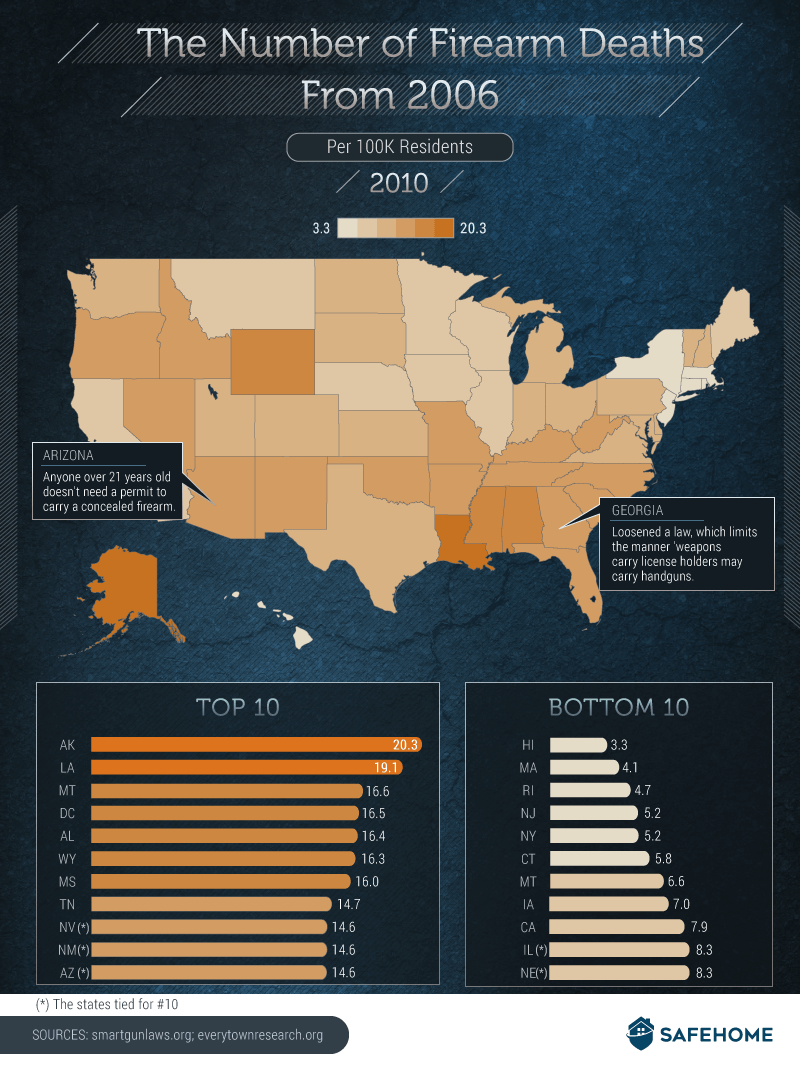 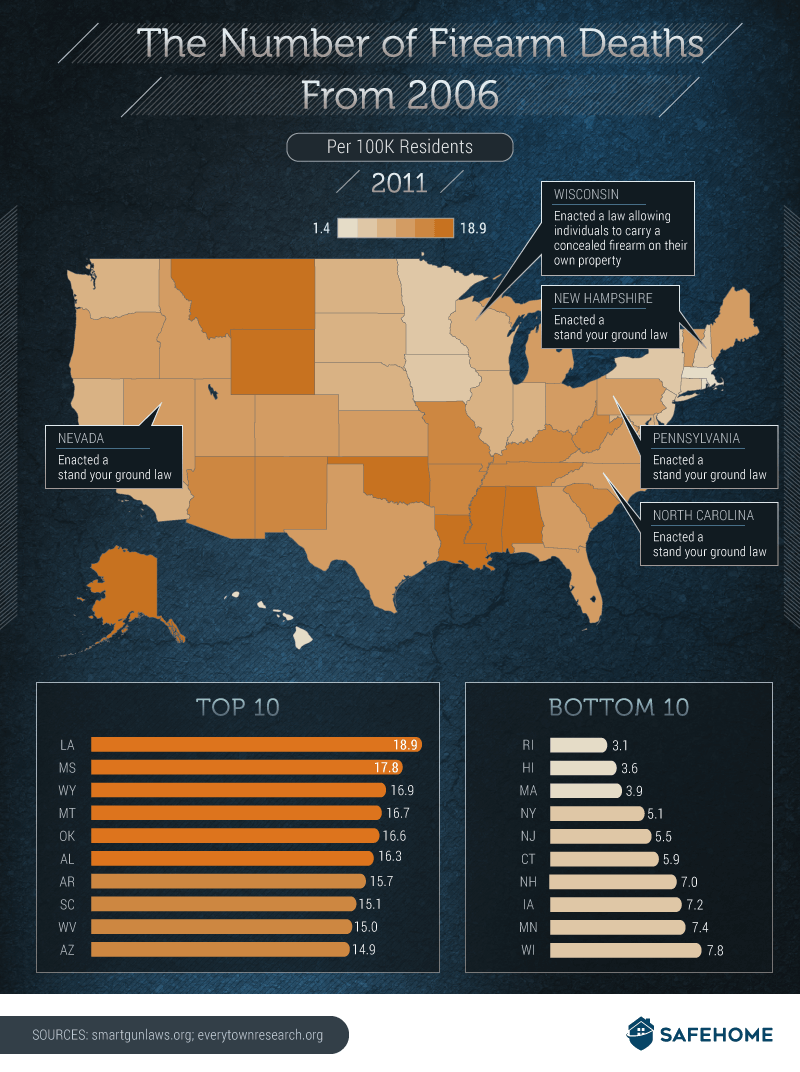 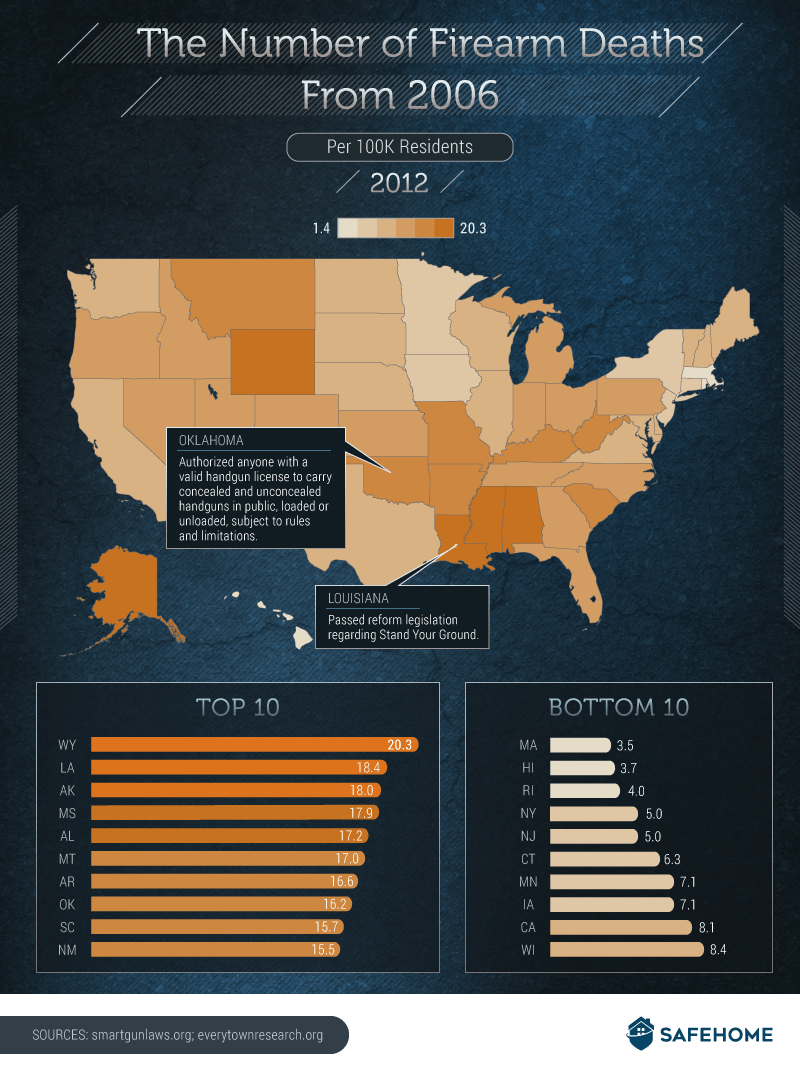 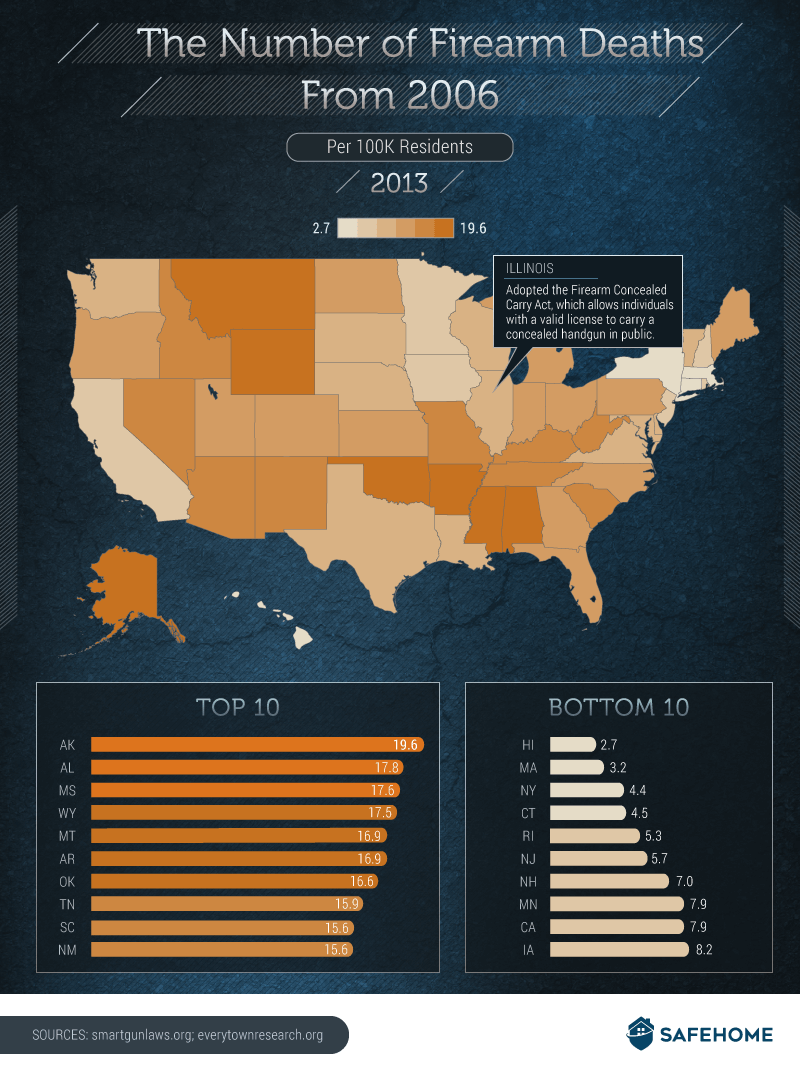 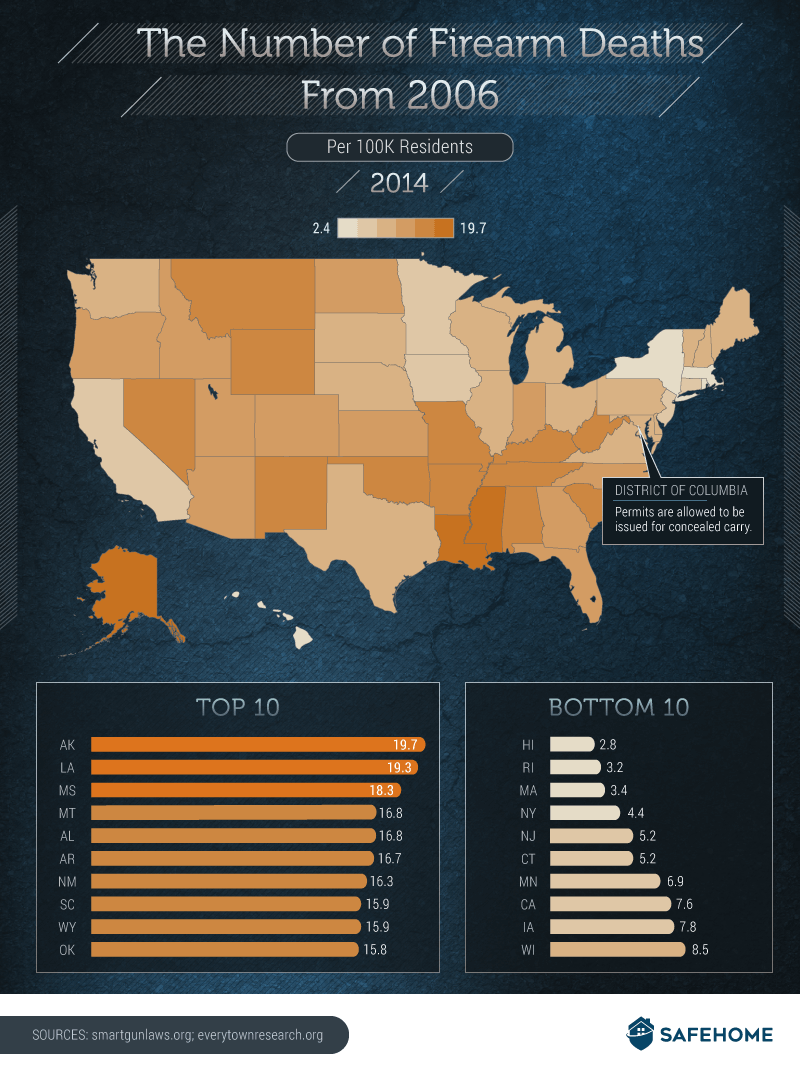 Florida passed a Stand Your Ground law in 2005, and saw a sharp 32% increase in gun-related homicides over the 10 years to follow. 23 other states passed stand your ground laws between 2006 and 2011. Florida appears to be the most dramatic example of a relationship between Stand Your Ground and gun deaths.

The Relationship Between Gun Laws and Gun Deaths 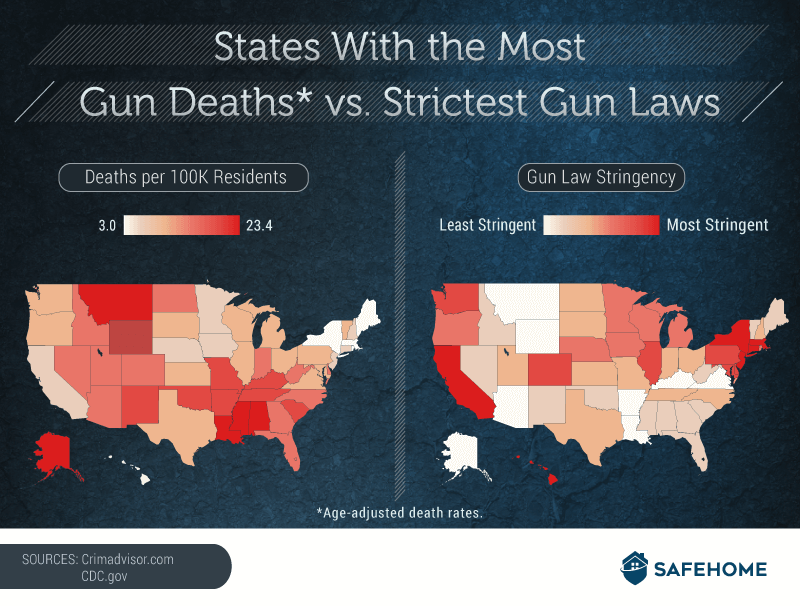 Southern states along the Mississippi River have consistently reported some of the highest rates of firearm deaths. Louisiana, Mississippi, Alabama, Tennessee and Arkansas currently fall within the top 10 for firearm deaths. One legislative similarity that all of these states share is that none of them require license, registration or permit to buy a gun, though there are dozens of other states with the same regulations. Still, the states surrounding the Mississippi River Delta were rated as some of the most lenient in terms of gun law stringency, according to Crimadvisor.

A Side-by-Side Look at Firearm Deaths and Gun Laws 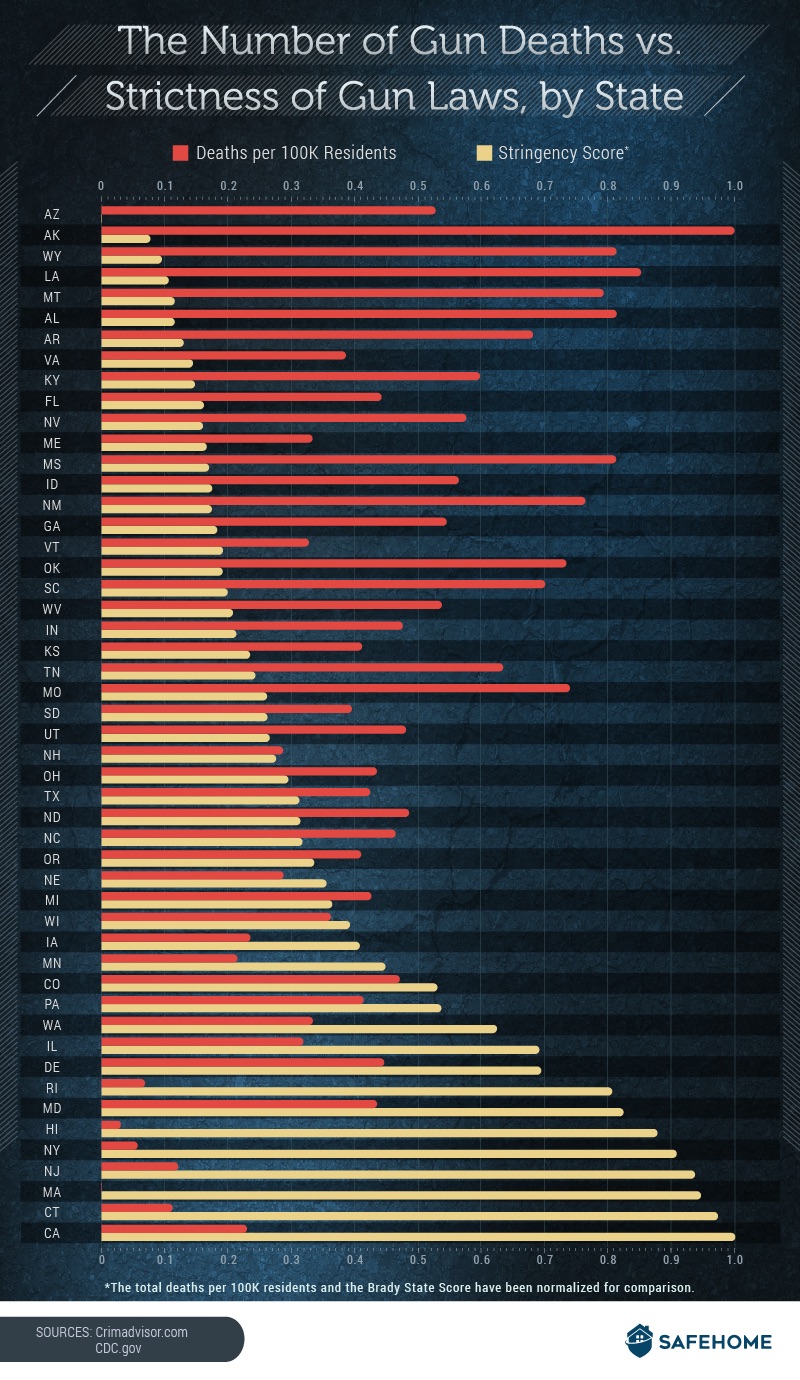 Conversely, while Washington and Rhode Island have some of the most restrictive gun laws in the U.S., they fall on the lower end of firearm death rates in the country. Six out of the top 10 states for firearm deaths enacted “stand your ground” laws around 2006.

The issue of gun violence is extremely complicated and varied across state laws and local culture. Many states support the notion that firearm regulation is a necessary measure in preventing and reducing gun deaths; however, many other states do not take this stance.

While the facts may speak for themselves in the debate over gun violence, they don’t necessarily point toward a catch-all solution on their own. Until this solution is found, though, it’s our duty to stay knowledgeable about the issues and to practice responsible gun ownership at all times or to just own a home security system!

Using data from the Centers for Disease Control and Prevention, the FBI Uniform Crime Reporting database, and other sources, we compiled rates of gun ownership, firearm deaths including suicide, homicide, accidental death and legal intervention, and the stringency of gun laws across the U.S.

It’s safe to use the graphics above in your content. (You’re protected.) But please link back to this page so the authors of this material secure proper credit.