It should come as no surprise that children are highly curious beings who learn about the world around them through their five senses. Most commonly, they want to touch everything with their hands. Many young children also put objects into their mouth without a thought for their safety. In our 2022 Annual Childproofing Report, 4 out of 10 parents believed a child’s injury could have been avoided had they taken proper child proofing precautions in and around the home. A child’s natural exploration of a home can lead to serious injuries if proper safety measures aren’t in place.

Last year, we collected expert advice to create an ultimate guide to childproofing your home. Our new childproofing research checks in with American parents to identify which measures they have in place to safeguard their children, and which safety issues have been most overlooked. How can parents better protect their kids? Do smart home technologies help? Let’s examine the answers to these questions and more below. 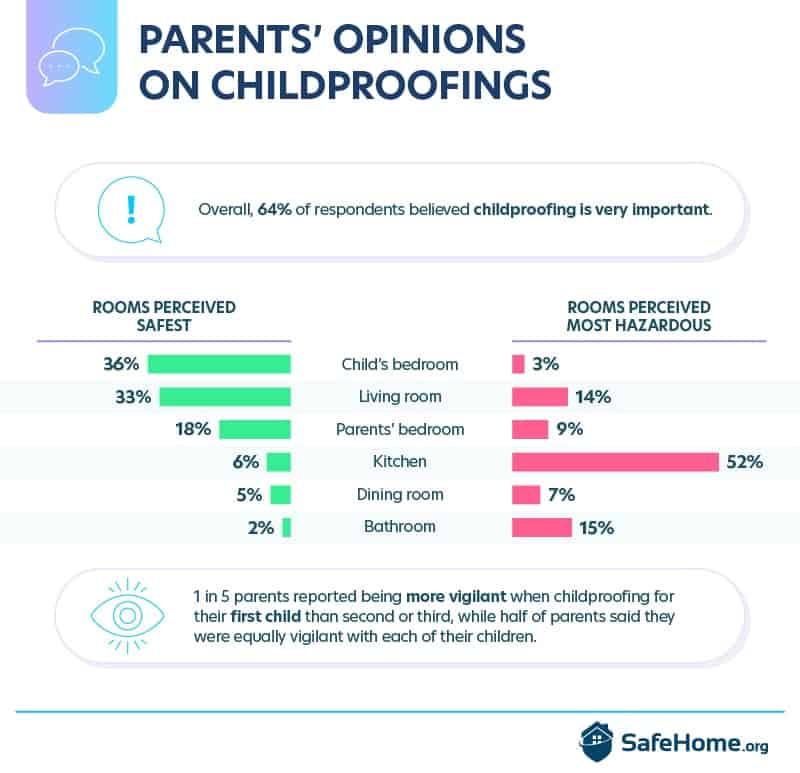 More than 6 out of 10 parents believed childproofing a home to be extremely or very important, with those in their 40s being more concerned about home safety than younger or older generations. Parents with two children (57%) were more likely to have the same level of vigilance for both children than parents of three or more children (49%). About 40% of parents with multiple kids said they were most vigilant with their first child.

The majority agreed that the kitchen is the most hazardous room in a home, while a child’s bedroom is the safest. Keeping knives out of reach was the top safety measure used in American kitchens as well as installing cabinet locks and unplugging appliances when they aren’t in use.

Parents believed bathrooms are the second most dangerous place in a home, most likely due to hazards such as drowning, hot water burns, slips and falls, and chemicals. The most common safety measures parents have installed include anti-scald devices and non-skid strips in the shower/bathtub or on the floor. 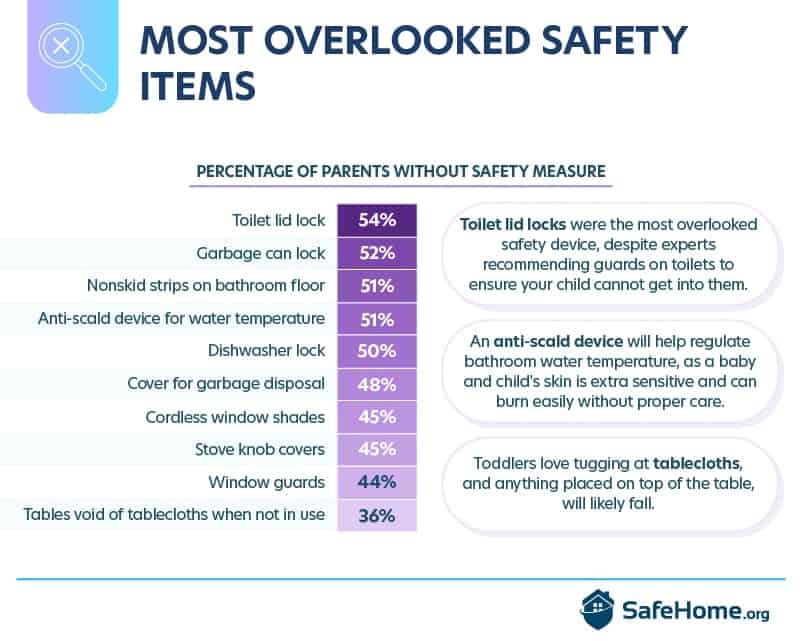 The most overlooked safety device was a toilet lid lock, possibly because it would cause an inconvenience to others in the household. Parents may also be unaware of the hazard of such a small amount of water. While drowning in a toilet is rare, it does happen to toddlers. In fact, drowning is the number one cause of injury-related death in children aged 1 to 4. A lid lock is a simple fix to prevent a devastating tragedy. Plus, it will deter kids from playing in potentially germ-filled water or stuffing the bowl full of unflushable items.

Another major cause for concern was that 45% of parents ignore window shade cords. These are a widely known strangulation hazard for infants and small children. Replacing your traditional blinds with cordless window shades is a small investment worth every penny. 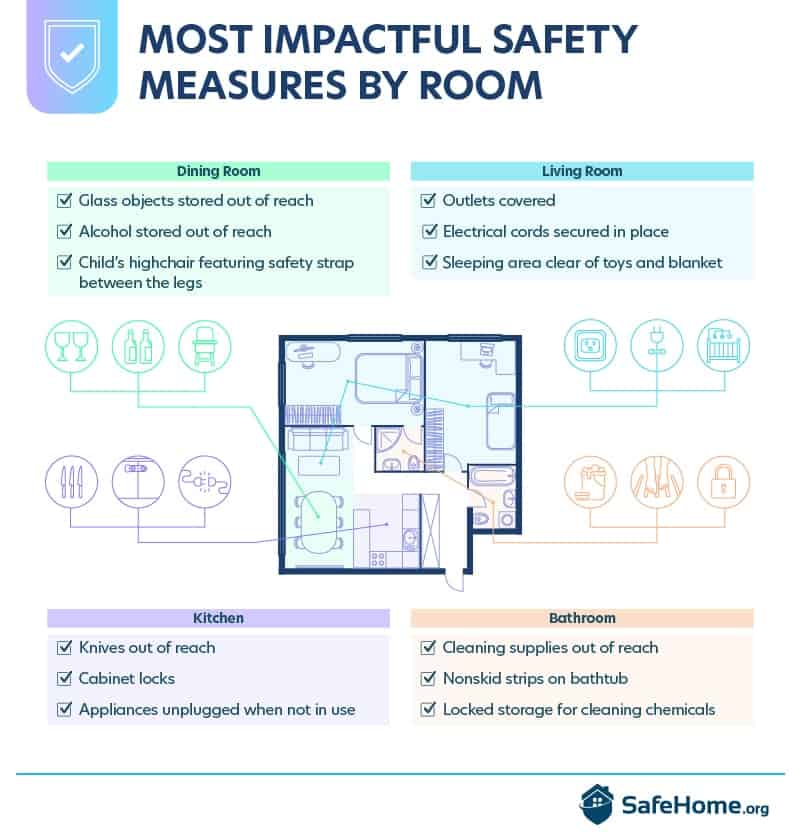 Our study also revealed that 55% of parents don’t childproof their homes until their children are infants or toddlers, and only 15% of parents began childproofing during pregnancy. Our findings indicate that people delay installing safety precautions until their children are old enough to get into trouble; however, it would be safer to childproof a home ahead of time as newly mobile babies can quickly come to harm.

Experts recommend childproofing before the birth of a child or at least by the time they are six months old. It takes time to install safety measures and for those in the home to get used to them. It’s also recommended that parents evaluate their home’s safety precautions every six months. Potential hazards and safety needs will change as a child grows and develops.

According to the Centers for Disease Control and Prevention (CDC), accidental injuries are the leading cause of death in children aged 1 to 14 years old. Some accidents are preventable when parents take childproofing seriously. Our study results confirmed a correlation between the level of safety measures in a home and injury occurrences: Children are more likely to suffer extremely serious injuries in homes with fewer childproofing precautions. In addition, almost 40% of parents who have dealt with home emergencies believe that better childproofing would have prevented the accident. 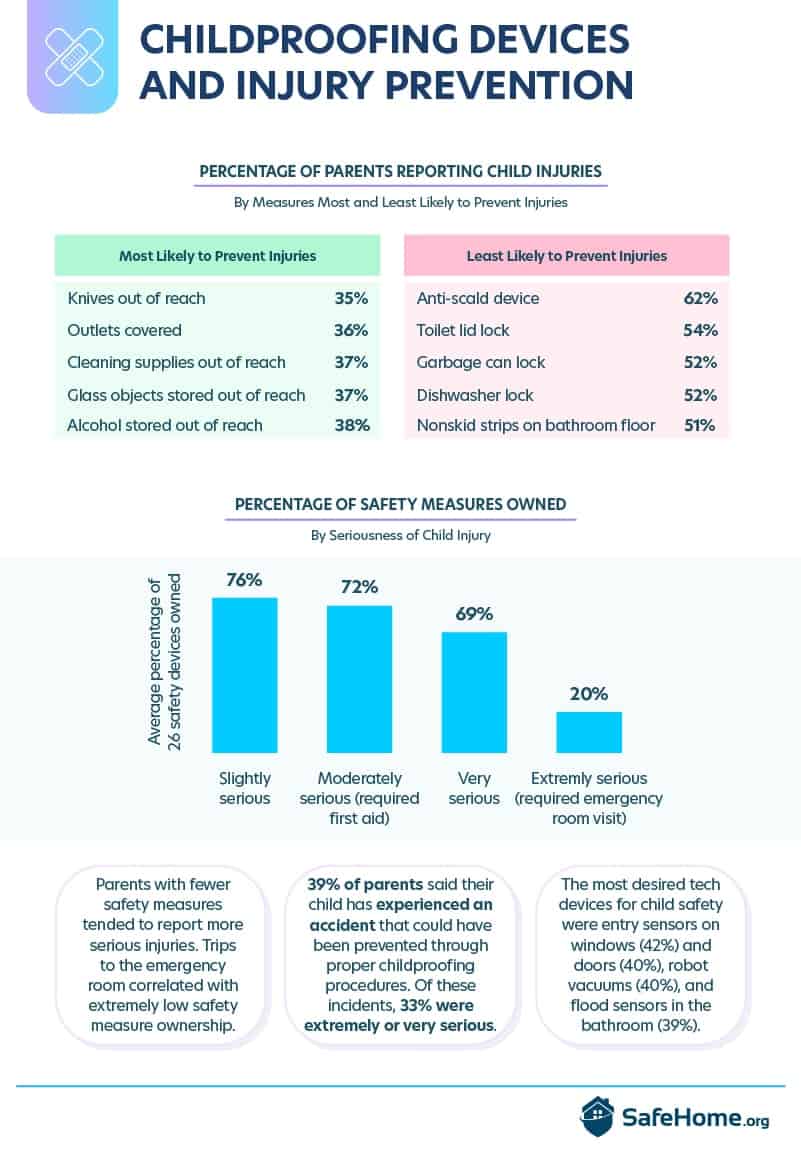 Another way to increase the safety of a home is to use smart devices. Our study also explored how parents use (or would like to use) smart home technology to help keep their kids safe. Indoor security cameras were a popular choice for many parents – 41% already use indoor cameras, while 34% wish they could. Movement-tracking baby monitors are also becoming increasingly popular among parents. Two-thirds of parents we surveyed either owned or wanted a smart monitor to track their baby.

Despite a parent’s best intentions, it’s very difficult to 100% childproof a home. We’ve determined some of the most commonly underused safety measures in American homes to help parents identify the gaps in their childproofing efforts.

Many parents feel strongly about protecting their children and understand the measures to take to keep their kids safe, however, there is room for improvement. Our study revealed that only 64% of parents believe childproofing is very important, and only 50% of parents are as vigilant with their second or third child as they are with their first. Most parents also delay childproofing until after the child is born, as only 15% reported doing so during pregnancy.

Childproofing hazardous items in your home is one of the best defenses against a serious or fatal injury. Accidents are always going to happen, but many childhood injuries are preventable if the right safety measures are in place. From low-tech cabinet locks to high-tech smart cameras, parents have many options they can rely on to safeguard children in their homes today.

We surveyed 994 parents of children under 18 using the Amazon Mechanical Turk platform. 51% of our participants were men and 48% were women with less than 1% identifying as nonbinary. Participants ranged in age from 20 to 84 with a mean of 38 and a standard deviation of 9.6.

The data we are presenting rely on self-report. There are many issues with self-reported data. These issues include, but are not limited to, the following: selective memory, telescoping, attribution, and exaggeration.