The Safest & Most Dangerous College Campuses of 2021

For many young people, going off to college is the first time they taste real freedom. Especially for those who are moving out of their parents’ houses and living on their own, this newfound freedom is also tinged with a substantial dose of risk. That means taking on the financial risk of adulting for the first time as well as leaving the physical safety that their parents have provided.

That’s why outside of cost and academics, having a safe campus is often the deciding factor in a prospective student’s ultimate college choice. But just as every college has its own unique academic reputation, not every institution performs the same when it comes to maintaining a safe and crime-free campus.

In fact, about 1 in 10 college students will experience rape or sexual assault during their years in college, and for female students, that percentage is considerably higher (23.1%). Additionally, college-age Americans are the most likely group to be victims of any type of violent crime.

So which campuses, cities and college towns are the safest (and least safe) for college students? In answering that question, we’ll look at data from the U.S. Department of Justice, Federal Bureau of Investigation and U.S. Department of Education covering violent offenses on hundreds of college campuses and in nearly 150 U.S. cities.

In 2017, more than 3.1 million Americans 12 and older were victims of violent crime, a 17% increase from the rates reported in 2015. Among age groups, those between the ages of 18 and 24 have the highest rates of all violent victimization and serious violent victimization, which includes rape, sexual assault, robbery and aggravated assault. 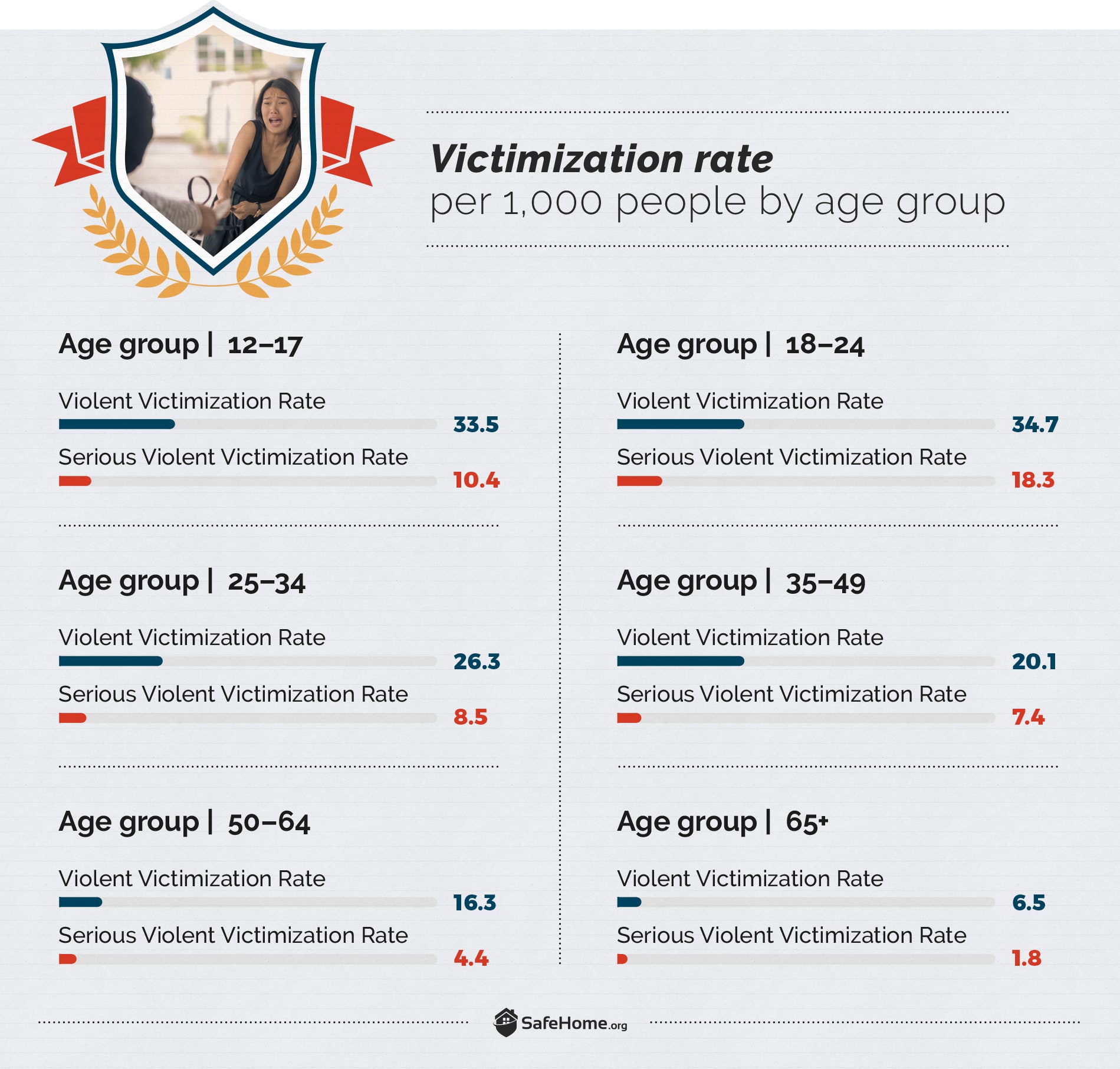 This age group also has seen by far the largest increase in both violence and serious violence since 2015, with rates of such incidents rising 38.2% and 71%, respectively. 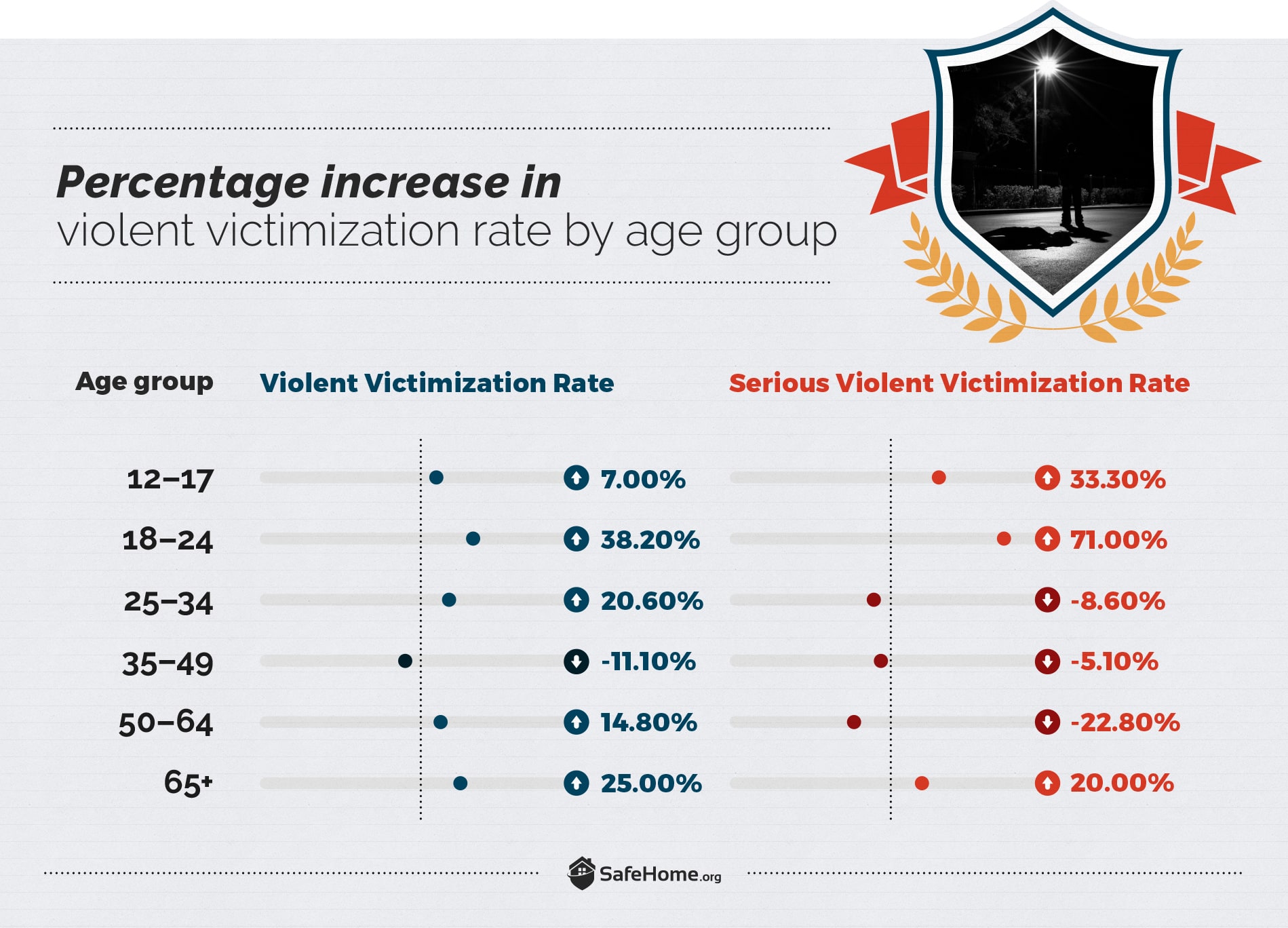 The U.S. is home to well over 4,000 degree-granting colleges, universities and other institutions of higher learning, though many of them aren’t exactly “colleges” — at least not for the purposes of this study. After all, that number includes institutions that don’t really have campuses to speak of or are professional academies, such as X-ray tech schools.

Among those that do have campuses, still more institutions have enrollment figures that are so small that any incidents reported would be more heavily weighted than might be fair, so for this analysis, we’ve limited our scope to non-profit colleges, universities, junior colleges and community colleges with an enrollment of at least 10,000.

That left us with just over 500 schools, of which, about 17% had no reported on-campus incidents of violence, which includes murder, rape, negligent homicide, robbery, aggravated assault or arson.

Violent crimes occur in the entire U.S. at a rate of about 3.8 per 1,000 people, according to the FBI’s full report from 2017. Only one campus has a higher rate, and only 10 others are within 2 points.

Of those 11, six are public and five are private institutions, and Berkeley has the highest reported enrollment at more than 40,000 students, while Brown’s 10,095 is the lowest of the group.

Among all universities on this list, rape is by far the most common violent crime reported, and Nebraska’s place as the campus with the highest violent crime rate is driven largely by the 116 rapes that were reported by the Department of Education. No campus had more reported rapes.

Among the small schools that had reportable rates of violent crimes, meaning they reported any at all, Brown’s rate was the highest, though several other small schools are within range. 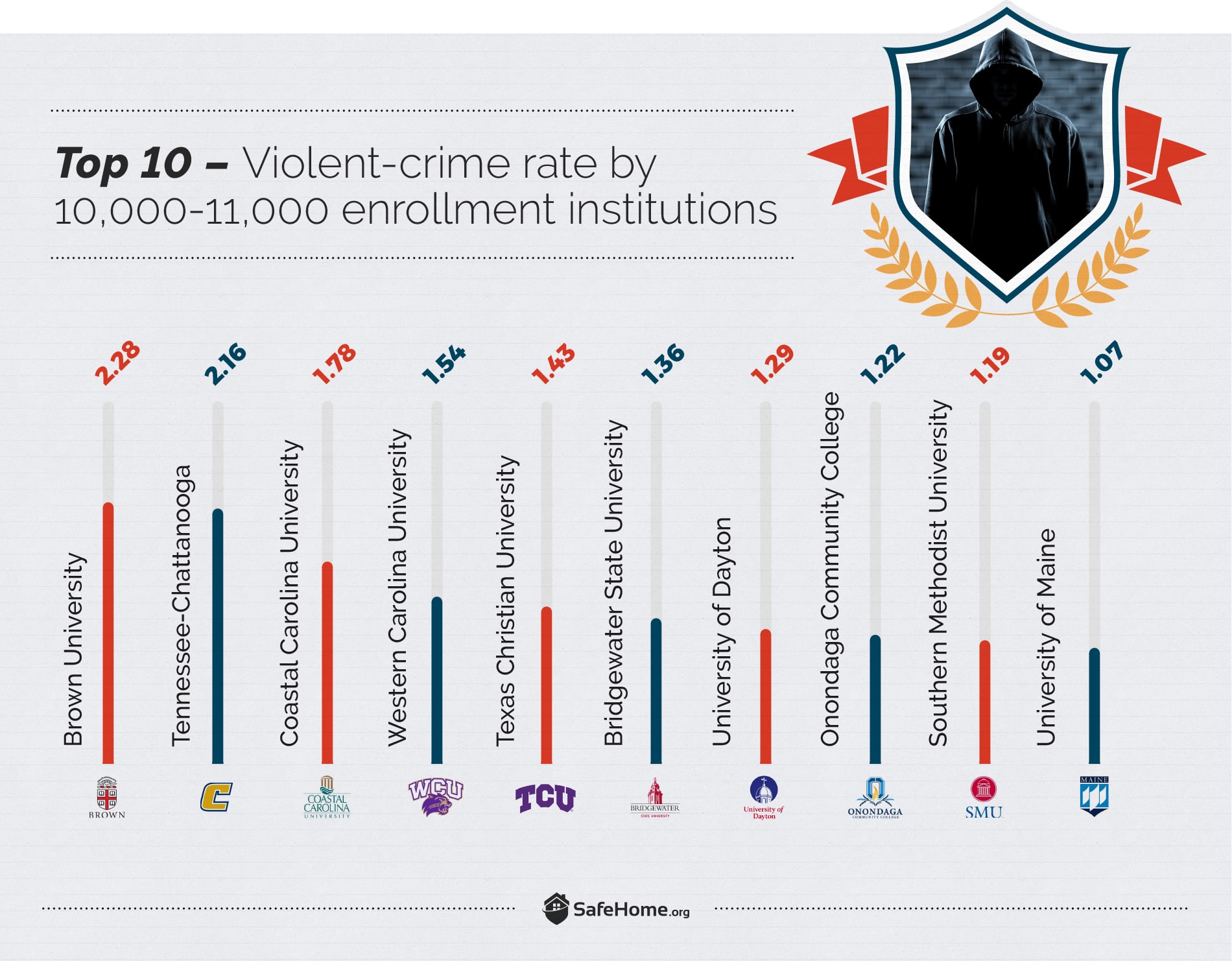 Among institutions with large enrollments (those over 35,000), UC-Berkeley has the highest violent-crime rate, and there are several institutions with very low rates, though each had at least one violent crime.

Most states have at least two universities that qualify for our list, with the exception of Alaska, Delaware, Hawaii, Maine, New Hampshire, Vermont and Wyoming. Which campuses in each state have the highest and lowest violent-crime rates per 1,000 students, among those with any crimes to report?

So far what we’ve examined is data reported by the U.S. Department of Education covering violent acts reported on college campuses across the country. But for many students, the area around the campus is just as important, if not more. After all, more than half of college students live off-campus and not with their parents.

While many campuses essentially become their own cities, particularly large state universities, most major U.S. cities have at least one college or university that appears on our list of 500-some universities with violent crimes. 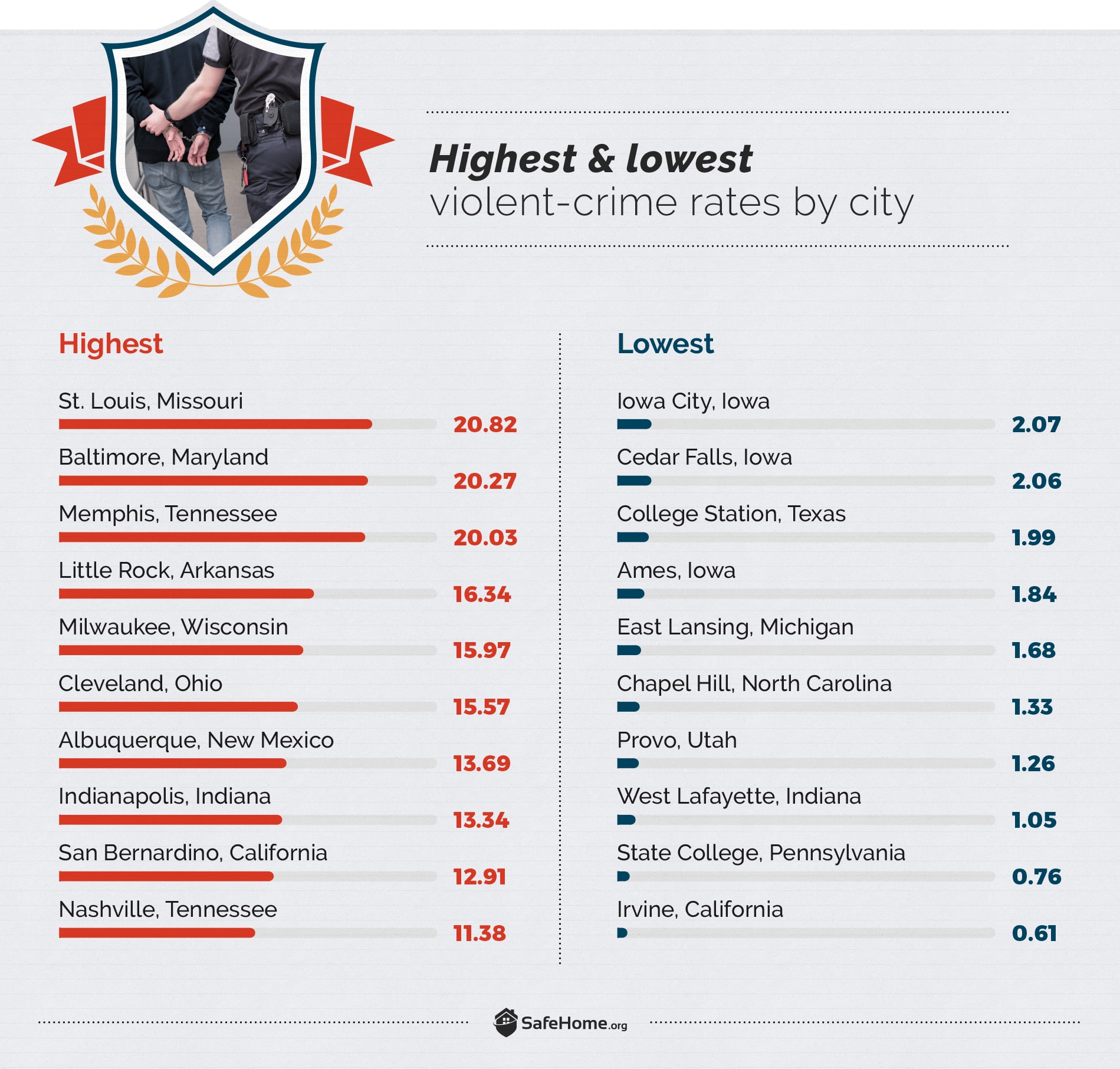 Iowa has three college towns that appear among the 10 major college towns with the lowest violent crime rates, while Indiana is the only state with one city on each list.

Prospective college students probably don’t want to think too much about their chances of becoming victims of violent crimes while on-campus or off-campus. But the truth is that people in that age group, whether they’re in college or not, are the ones who need to be most worried because their rates of violent victimization are the highest. And as we’ve seen from the data, few college campuses are free of any violence.

But even some very large schools seem to be doing their part to keep campuses safe. Don’t just rely on the data; ask current students. According to the 2017 2017 National Student Satisfaction and Priorities Report, a majority of students at four-year public universities say their campuses are safe and secure for all students.

Our figures on violence across American college campuses came from the U.S. Department of Education, which maintains a robust database on incidents reported by all institutions of higher learning across the country.

As mentioned, we limited our scope somewhat to colleges, community colleges, universities and other institutions that are non-profit and had an enrollment of at least 10,000. We also included only violent incidents that had corrolaries with reportable crimes — murder, manslaughter, rape, aggravated robbery and arson. This did exclude some incidents, such as cases of statutory rape, as it was not possible to know if physical violence was involved. The numbers were calculated from the full dataset found here.

Data on criminal victimization by age group came from the U.S. Bureau of Justice Statistics.

Violent crime data nationwide and by city came from the 2017 Crime in the United States database published by the FBI.

You are free to use the information and images you have seen on this page for noncommercial purposes. If you do wish to share the info, simply provide a link back to this report to give proper credit.