When Will COVID-Displaced Remote Workers Feel Safe Heading Back to the Office?

In early April, a Gallup poll indicated that 62 percent of employed Americans had worked from home for at least a portion of the pandemic crisis, but with states continuing to lift lockdown restrictions amid fluctuating infection and hospitalization rates, the safety of heading back to the workplace is still very much in question.

Beyond recommendations from elected officials and health administrators, what will it take for the typical worker whose routine has shifted as a result of the pandemic to feel comfortable heading back to the workplace, and what can wise employers and businesses do to ease the concerns their employees might have?

To understand where COVID-displaced workers stand when it comes to efforts to return a working arrangement approaching normal, we asked more than 600 adults who began working from home due to the pandemic about how well they’ve adjusted to working remotely, what their comfort level is in heading back to the office and what they feel their employers could or should do to ease the transition.

How We Feel About Working From Home

Our research indicates that the majority of newly home-based workers are mostly enjoying the experience. While only about 28 percent of those who said they were working from home because of the pandemic indicated that their WFH setup was perfect and that they could work from home for as long as needed. Very few indicated that they were consistently having a hard time.

Workers between the ages of 30 and 60 were the most likely to indicate their WFH setups were far from satisfactory. Notably, the only group for whom family was too much of a distraction were those between the ages of 30 and 44, while respondents over 60 were just barely the group most likely to indicate that their setup is ideal. 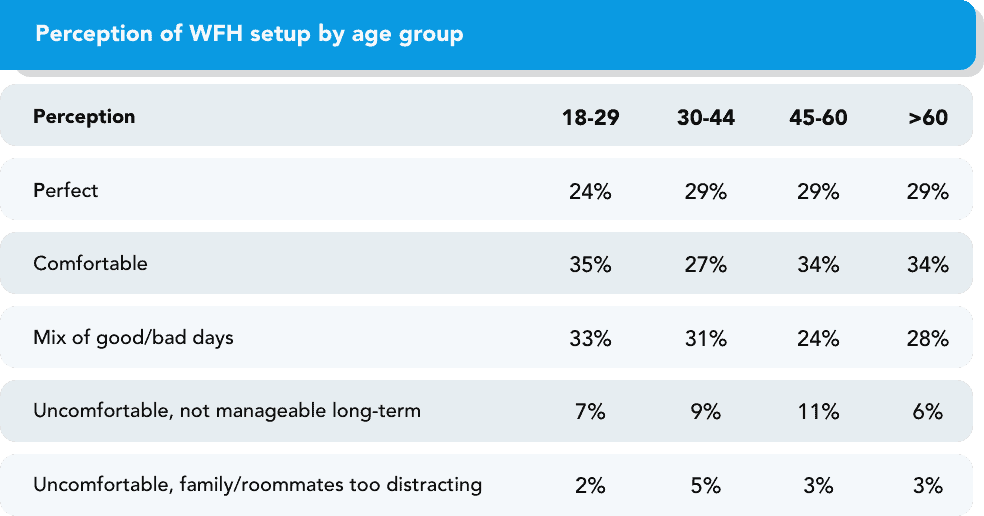 Women are more likely than men to indicate that working from home is especially challenging, and men are slightly more likely to say they can work from home as long as needed. 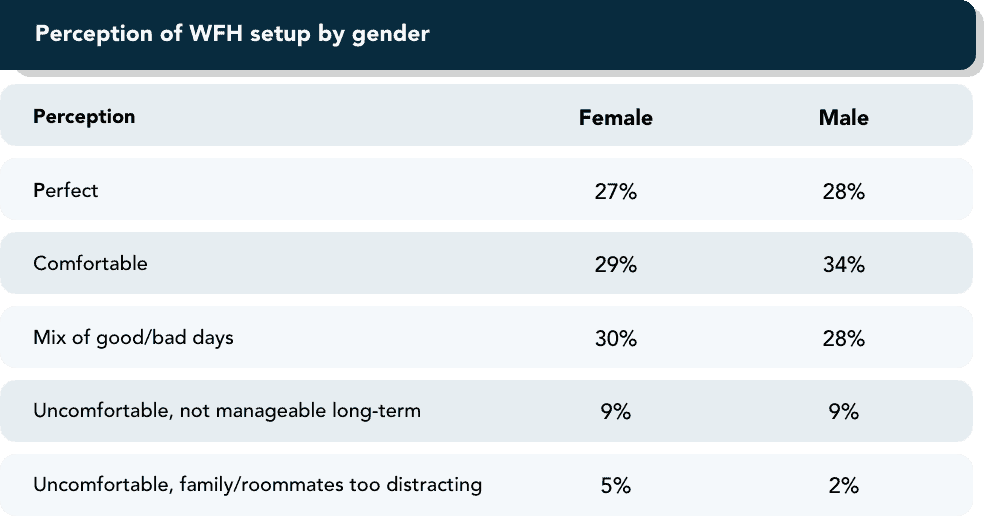 Employees’ comfort level with working from home is heavily influenced by how effectively their employers set them up for success. Only about one in four of those WFH said their employer did not adequately provide supplies or funding to enable them to create a good office environment, while 37 percent said their bosses covered this completely and another 40 percent said these needs were at least partially covered.

Overall, only 28 percent of workers said their WFH setups were perfect and would allow them to work from home as long as necessary, for those who received all the supplies and funds they needed to create a good work environment at home, that number rose to nearly half. And these workers were about three times as likely as those who received no support in setting up their home office to rate their situation as a perfect work environment.

About one in six workers who received no support from their employers in establishing a home office said their setups are not manageable long-term, while those who received only partial support were the most likely (37 percent) to say they have a mix of good and bad days.

How We Feel About Going Back to the Office

Our survey, completed in early June as many states began allowing more types of companies to resume in-person operations, found that most remote workers wouldn’t yet feel completely safe heading back to the office, even if conditions were deemed safe by government and health officials. But the vast majority of those WFH (about two in three) would be at least somewhat comfortable heading back into the office after being given the all-clear to return.

Despite the fact that older people account for the majority of deaths from COVID-19, older workers were much more likely than their younger counterparts to say they would feel perfectly comfortable returning to work if doing so had been deemed safe. But considering those who feel at least somewhat comfortable, younger workers have the highest comfort level. 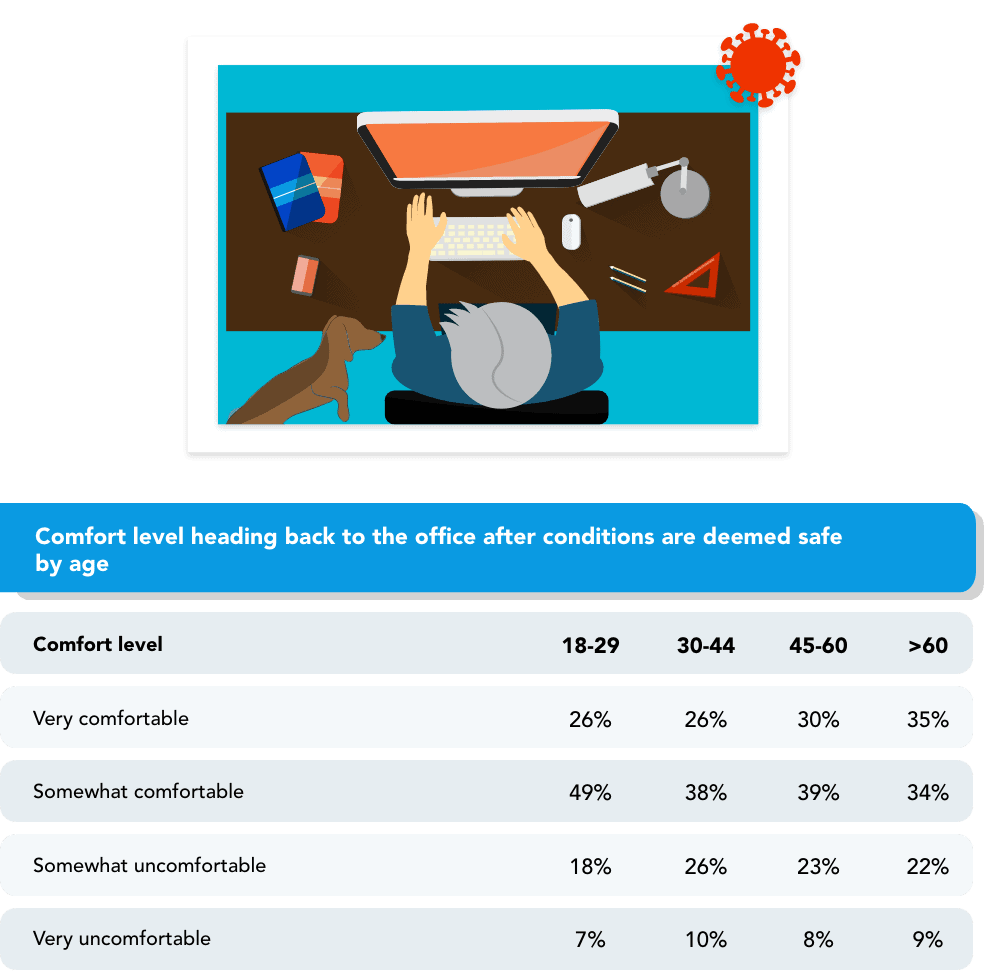 Men in our survey were much more comfortable with returning to the office after getting the all-clear, and about one in 10 women we surveyed said they were very uncomfortable with the prospect.

And, just in case businesses are concerned with making their employees too comfortable when they work from home — 43 percent of those who said their employers provided adequate supplies and funding to establish good working environments at home said they’d feel very comfortable heading back into the office when given the all-clear. This was more than double the rate at which workers who did not receive this support at all or who only received partial support said the same.

Taken together, these two points could indicate that the businesses that can expect the best bounce-back when they reopen are those that have centered the needs of their workers during this crisis.

How Can Businesses Open Up the Right Way?

Speaking of centering workers’ needs during the crisis, how can businesses make their employees feel as comfortable as possible as they look to reopen? So, we asked about the

biggest concerns with heading back into the office, what an ideal return plan looks like and what preventive methods they’d like to see at their workplace when they head back.

Potential exposure to COVID-19 was the most commonly cited concern with returning to work in the office, with nearly two in three remote workers indicating they’d worry about getting the virus at work. No other concern was even close, though about one in three people said they worried it would be harder to work from home, while a similar number said they feared exposure to the virus during their commute. 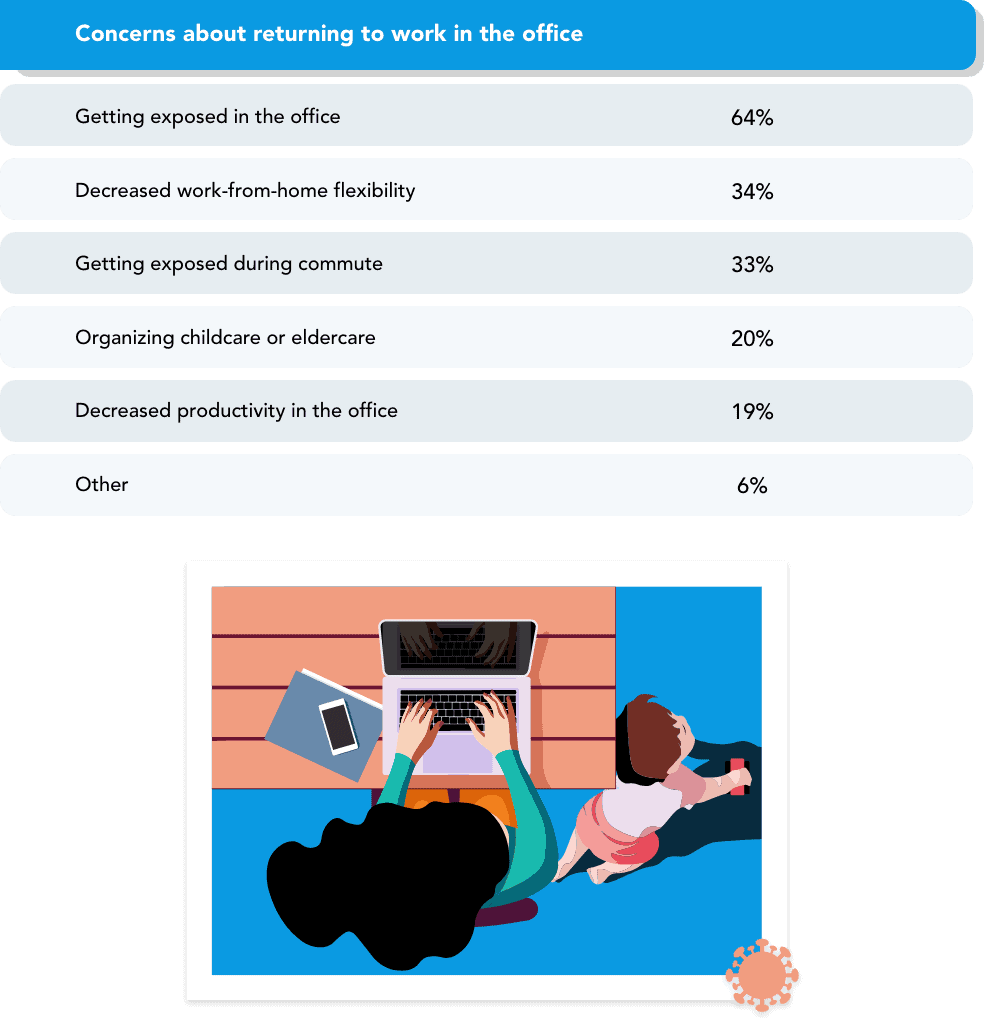 More than half of those citing childcare or eldercare as their biggest concern with heading back to work were between 30 and 44, while less than two percent of those worried about their productivity upon returning to work were older than 60.

It probably shouldn’t come as a surprise given that our research indicates that most COVID- related remote workers have had a positive experience, but less than one in four WFH’ers said they favored a plan to return to business as usual, with more than half saying they’d prefer a partial in-office workweek or only coming to the office as needed. 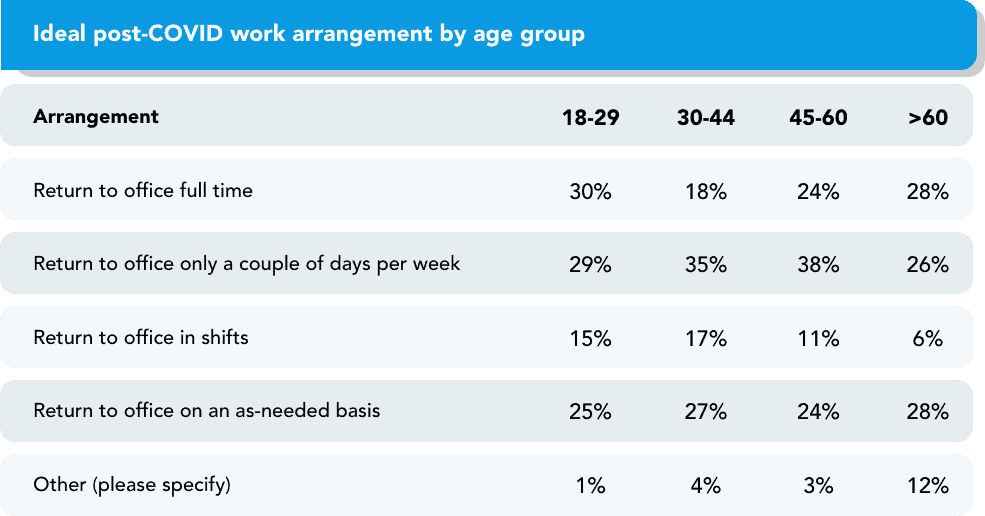 Slight variations were seen along gender lines, but men and women mostly have the same views on what is an ideal plan for reopening businesses. Notably, men were more likely (by three percentage points) to favor a full-time return to work, but they were also more likely (by six percentage points) to favor working only a couple of days a week in the office and spending the remainder of the week working from home.

While there’s a clear indication in our survey that workers who received supplies or funds to purchase needed items for their home offices were far more likely to rate their WFH setups as perfect, most say that they’d remain productive at home even if their workstations were returned to the office. In fact, among those with home-based workstations, about 66 percent said they’d still be able to work efficiently at home.

So, what will shake workers from feelings of discomfort about heading back to work? We proposed a total of 16 measures, from providing hand sanitizer to vaccine access to requiring the wearing of masks at work, and only one of the 16 received a majority of support from COVID-displaced workers — hand sanitizer stations, with 52 percent of respondents saying that would make them feel the most comfortable when they return to the office.

Most of the measures we mentioned to survey participants are within employers’ control, but notably, several aren’t, including access to a vaccine (45 percent), antibody testing (32 percent), and securing childcare or eldercare (15 percent). 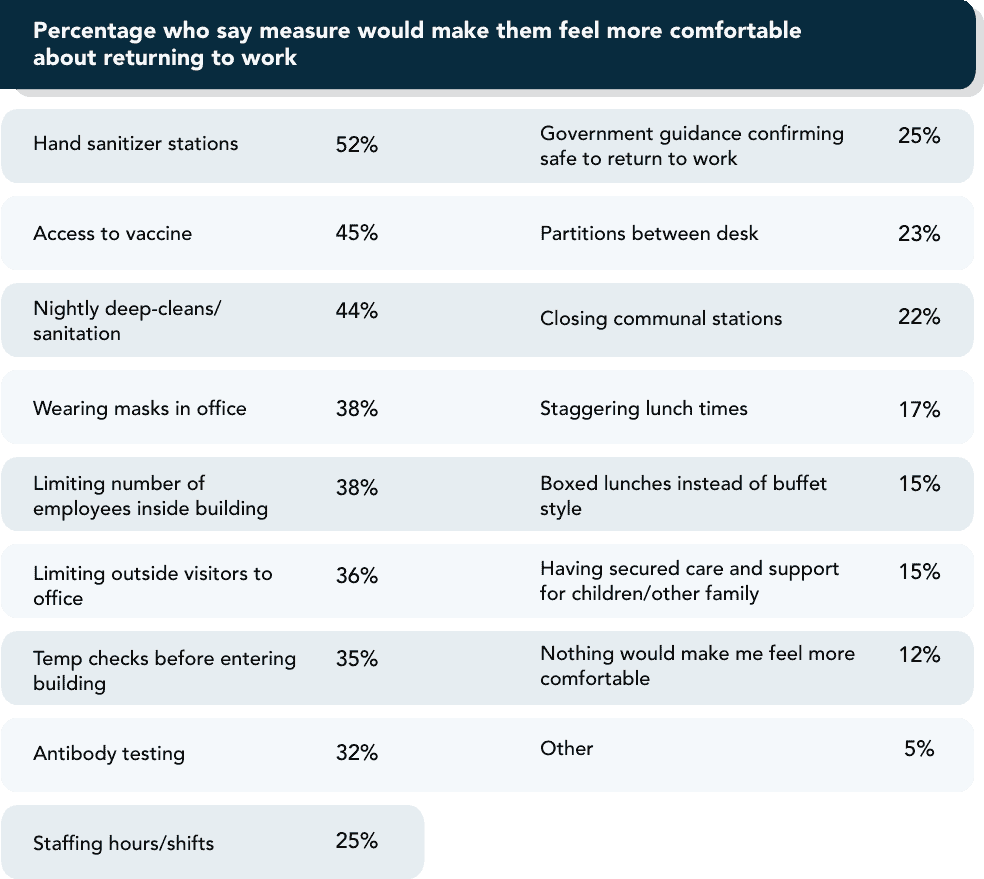 Younger workers were by far the most likely to say there aren’t measures that would make them feel more comfortable about returning to work (15 percent), hand sanitizer stations and access to a vaccine were the only measures to enjoy 40-plus-percentage endorsement regardless of the age of the COVID-displaced worker. 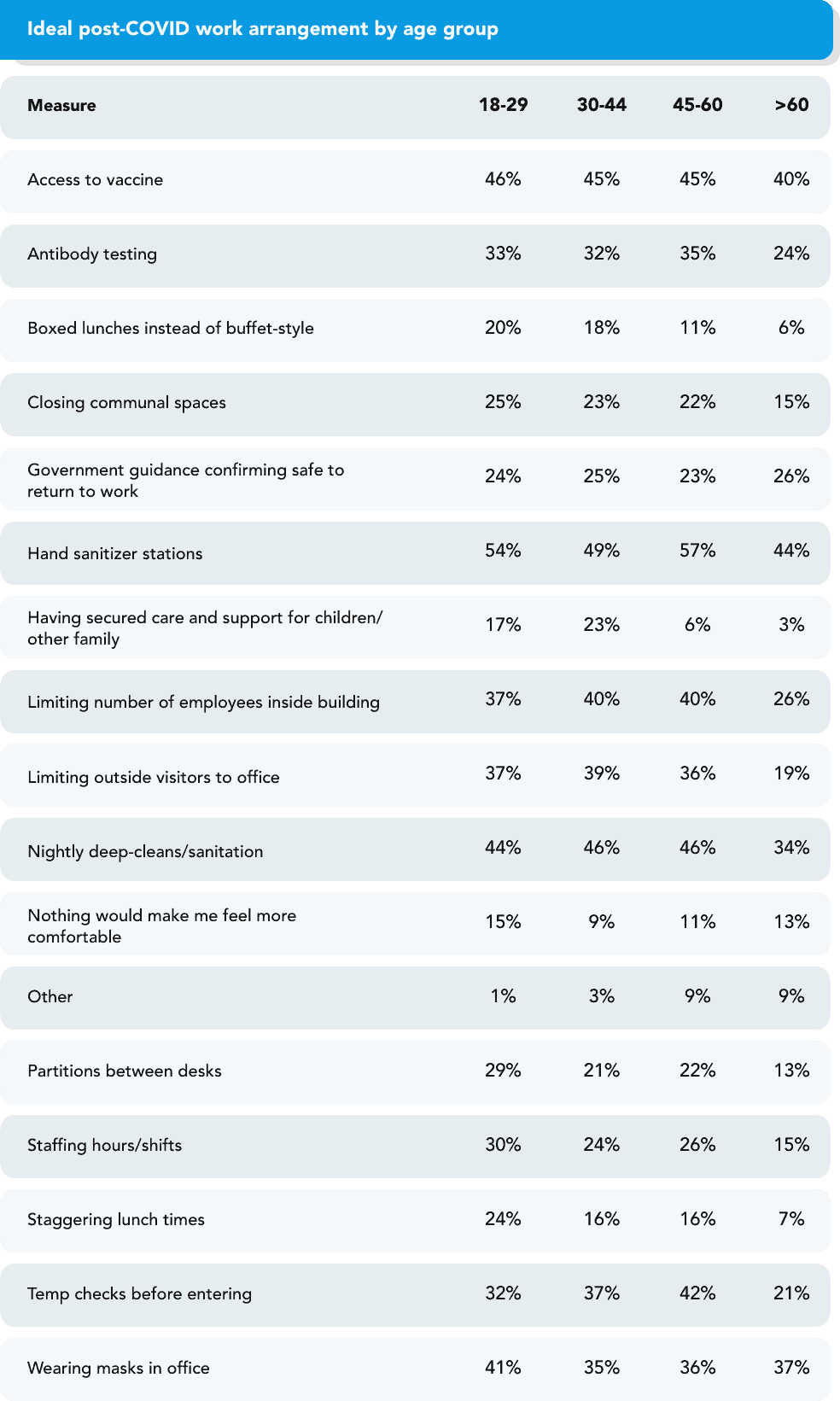 The good news is that most workers who have shifted from in-office work to remote work have had a largely positive experience over the past few months, and few of them are intensely fearful of returning to the workplace. While it’s true that the second-most desired safety measure in the office isn’t actually an office safety measure at all (it’s access to a vaccine), it’s also true that many of the other desired measures are entirely within a company’s control, and they’re mostly inexpensive, including hand sanitizer stations, nightly sanitation and requiring the wearing of masks inside the workplace.