Based on a Population of at least 7k

Methodology: We use a variety of factors to determine these rankings. To see our full methodology, click here.

If you grew up drinking Kool-Aid, then you can thank Nebraska for that, as it was created here in 1927. If you ever used CliffsNotes to catch up on reading assignments or to help study for essays and exams, then you can thank Nebraska for that as well. Warren Buffet, the 2nd richest man in the world, has his conglomerate holding company – Berkshire Hathaway – based in Omaha. Due to the large plains of the state, Nebraska has a very large agriculture sector, especially in livestock products such as beef and pork. You’ll be impressed to know that Nebraska has the lowest unemployment rate in the country of just 2.5%. With everyone busy with their work, you’ll also find that Nebraska has a lot of very safe cities to live in.

The safety ranking range of the top safest cities in the state is very good, with a high of 91.11 to a low of 70.35. Compare that to other states that commonly have a low in the 50s and 40s. However, most of the cities in Nebraska have a small population, and therefore don’t qualify for national rankings (which the minimum is 50k). The three larger cities of Nebraska did make it onto the top 500 safest cities in the nation though. Most of the 25 safest cities in Nebraska can also boast no increases in their very low crime rates, or they’ve experienced a decrease in their violent and property crime rates. Let's just say that home security system sales aren't very common in Nebraska.

The safest city in Nebraska is Gering, with a safety score of 91.11 and a population of 8,335. It is located at the base of Scotts Bluff National Monument, one of the most beautiful parts of the country. As it is at the base of one of the most iconic monuments in the nation, Gering tends to attract people who are very proud and honored to live there. This contributes significantly to the low crime rates.

Unlike other states with larger populations, Nebraska has safe cities located all over the state rather than clustered in the suburbs of a major metropolitan area. There is Seward (89.99) located outside the state capital, but then there is Columbus (89.42) much further north, and Alliance(87.4) far west. As mentioned earlier, with the lowest unemployment rate in the country and farm life the predominant job here, you’ll mostly find just safety and tranquility here. 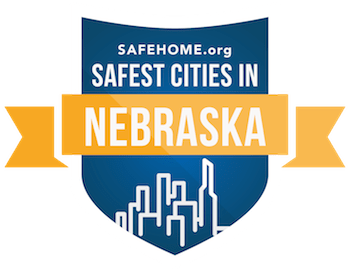 Want to See Other States?

This ranking calculates a Safety Score for major cities in the US. The higher the Safety Score, the safer data shows the city to be.

We look at several different factors when assigning a Safety Score to a city. First and foremost is the FBI’s latest report of how many and what types of crimes occurred in each city over a single year. The city’s crime trends are also considered; in other words, cities where crime is on the decline are given a higher Safety Score and vice-versa. We also look at the number of law enforcement officers compared to the population.

Finally, demographic metrics that are correlated to crime have a small impact on Safety Score. These include metrics such as population density, population trends, unemployment rate, median income, education level, etc.

The FBI’s UCR (Uniform Crime Reporting) program has existed since the 1920s, and is the most comprehensive source of crime statistics. Every year, data on crime occurrences is collected from the nation’s law enforcement agencies. Data is not included if a given city’s law enforcement agency does not follow UCR’s reporting guidelines.

The FBI UCR data also includes, for many cities, a count of total law enforcement employees, both officers and civilians.

The most recent data available from FBI UCR is for calendar year 2015. We have compared to each city’s 2014 data to analyze whether violent crime and property crime are rising or declining.

Demographic data is available from the US Census, last conducted in 2010. This data is more readily available by MSA (Metropolitan Statistical Area) than by city. For example, New York City itself is considered a city, while the New York City Metropolitan Statistical Area encompasses additional cities such as Newark, New Jersey and Jersey City, New Jersey.

Where possible, each city in the rankings was matched to its appropriate MSA.

The FBI UCR statistics are available online for public download. We obtained a copy of the 2015 data. Cities without 2015 data, due to incomplete data or not following UCR’s guidelines, are not given a Safety Score.

For the national rankings, cities with a population under 50,000 are not considered. This results in a digestible national list of safe cities and reduces the risk of outlier statistics.

Next, the 2015 data is combined with other datasets. The 2014 UCR crime statistics and the 2015 number of full time law enforcement are also provided by the FBI. If 2014 data or law enforcement data are missing, those cities are given a neutral, or average, value for these factors rather than being removed from the ranking. Neutral values are also given for crime trends in some cases where a city’s reporting statistics changed, and 2014 data cannot be fairly compared to 2015 data.

Demographic data comes from the US Census and is presented by Metropolitan Statistical Area. Each city must be matched to its associated MSA. In some cases, a city may be associated with an MSA across a state line. For example, Newark, New Jersey is associated with the New York City MSA.

However, each of these factors is not given equal consideration. Each factor listed above is given a weight, with a weight of 100% contributing most to the city’s crime score. The formula and table below show how much weight each factor is given.

Officer to Population ratio and crime trends are given medium weights.

If a city doesn't report either their 2014 data or their number of law enforcement, that city gets a neutral value for officer to population ratio and crime trends. Neutral values are 0% for crime trend and 435 (the national average) for population-to-officer ratio. This method is intended to avoid removing cities from the dataset for not having these metrics available, while at the same time not giving an unfair advantage or disadvantage on Safety Score. Essentially these cities are scored based on only 2015 data and Census data.

Demographic factors are given low weights. These are weighted low because data is available only at the Metropolitan Statistical Area level and not at the individual city level.

The following table shows how the seven types of crimes are ranked by seriousness and by fear. The rankings are then “flipped” or transposed so that the most serious gets the highest value. The transposed values are multiplied. Then, this combined score is normalized and fit within 100% to 80% for the violent crimes and 60% to 80% for the property crimes.