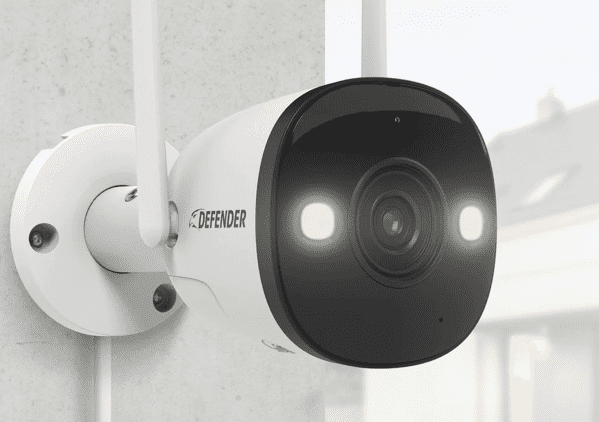 If you’re looking to protect your business or property like the pros, you may expect to pay through the nose.

Building out a network of professional-grade security equipment isn’t cheap. If you’re looking for wall-to-wall coverage with advanced features such as high-resolution recording, color night vision, smart human detection, and real-time alerts, you can easily pay thousands of dollars.

For those of us looking for a high-end solution without breaking the bank, there’s Defender. This Canadian security company is seeking to bridge the gap between the consumer and the professional, and they’ve been pretty successful in doing so.

Pro Tip: Don’t worry if you’re unsure how to evaluate your camera needs. We put together this handy guide to shopping for security cams.

Defender definitely cuts some corners to keep its prices low, but I never felt it was lacking. It’s more of a “we’ll give you exactly what you need and nothing you don’t” type of brand.

Let’s take a quick look at Defender’s pros and cons.

Defender’s ethos is solidly rooted in its origin. In 1999, the company’s founder, a guy named Raj, owned a retail electronics store in Niagara Falls, Canada. One night he locked up, and the next morning hundreds of thousands of dollars worth of inventory was stolen from his warehouse. Gone.

Pro Tip: Don’t think it could happen to you? Guess again. A burglary occurs every 26 seconds in the U.S.1

When he reached out to local security providers, he found that an entry-level professional system would have to be installed by their technicians and it would cost over $10,000.

He used that frustration to found Defender, a provider of professional-grade equipment at consumer-level costs. He specifically wanted individuals to be able to install and operate the systems themselves without blowing their retirement savings.

Now that you know about Defender, let’s take a closer look at its equipment.

At first glance, Defender’s product offerings are a little confusing. When you arrive at the company’s website, you’ll see a ton of packages and bundles to choose from. It’s easy to get overwhelmed. After you get your bearings, though, you’ll find that Defender offers three cameras: the Sentinel, the Guard, and the Phoenix. 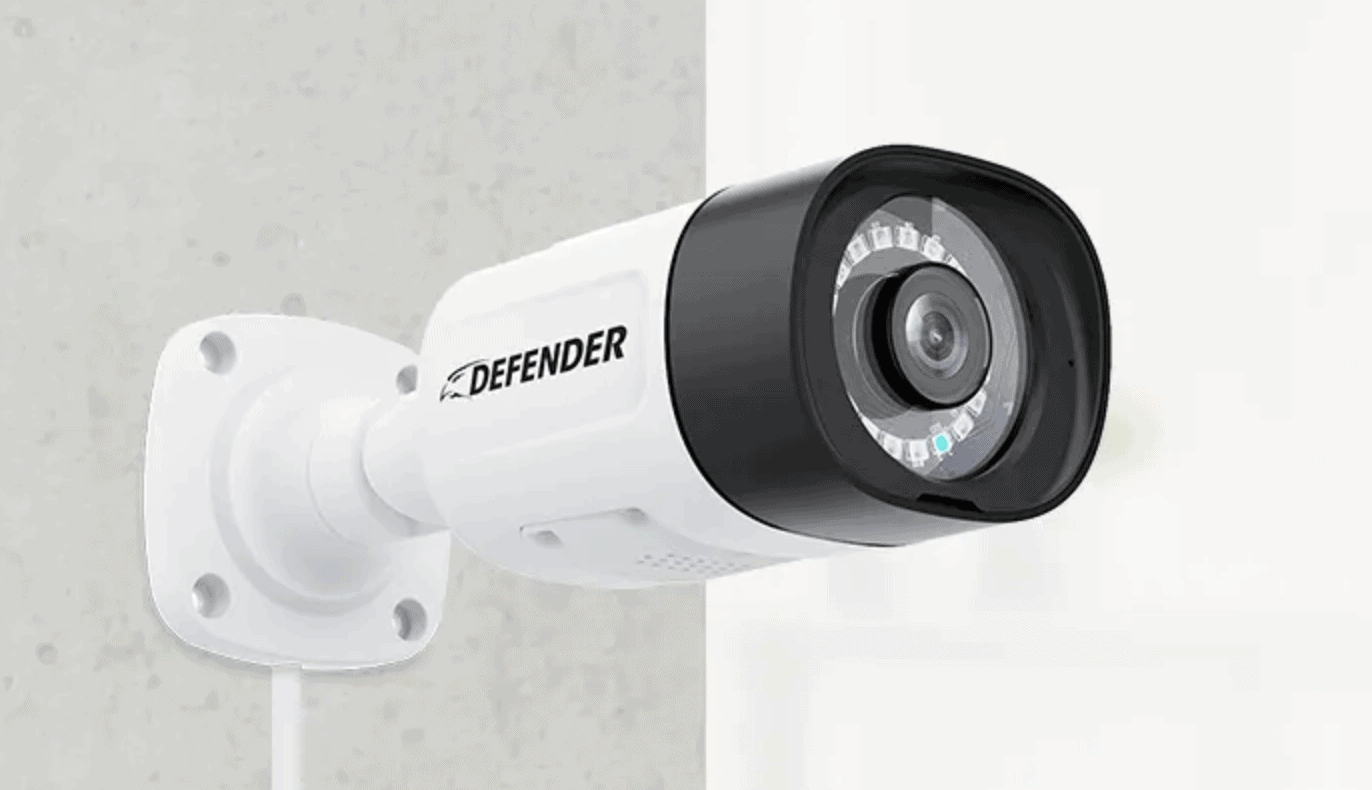 Defender’s flagship product, the Sentinel, comes in two flavors: NVR and DVR. The distinction doesn’t change the cameras’ functionality, just how they record. Without getting too bogged down in the details, a DVR (digital video recorder) processes data at the camera, while an NVR (network video recorder) encodes and processes data at the camera before transmitting it to the recorder. There’s not really any performance difference between the two; it just depends on your current setup and your needs.2

Pro Tip: DVR and NVR are both “traditional” security camera recording protocols. Your footage is stored locally, meaning it’s always in your control and you’ll never have to pay a subscription or storage fee to access it. They’re a little more expensive on the front end, but you could save money in the long run — especially if you’re running multiple cameras.

Both versions of the Sentinel offer a long list of features, including:

Packages start at $429 for four cameras and a DVR recording station. If you go with NVR, it’ll run you $437. Either way, if you’re looking for the best Defender has to offer, the Sentinel is it. 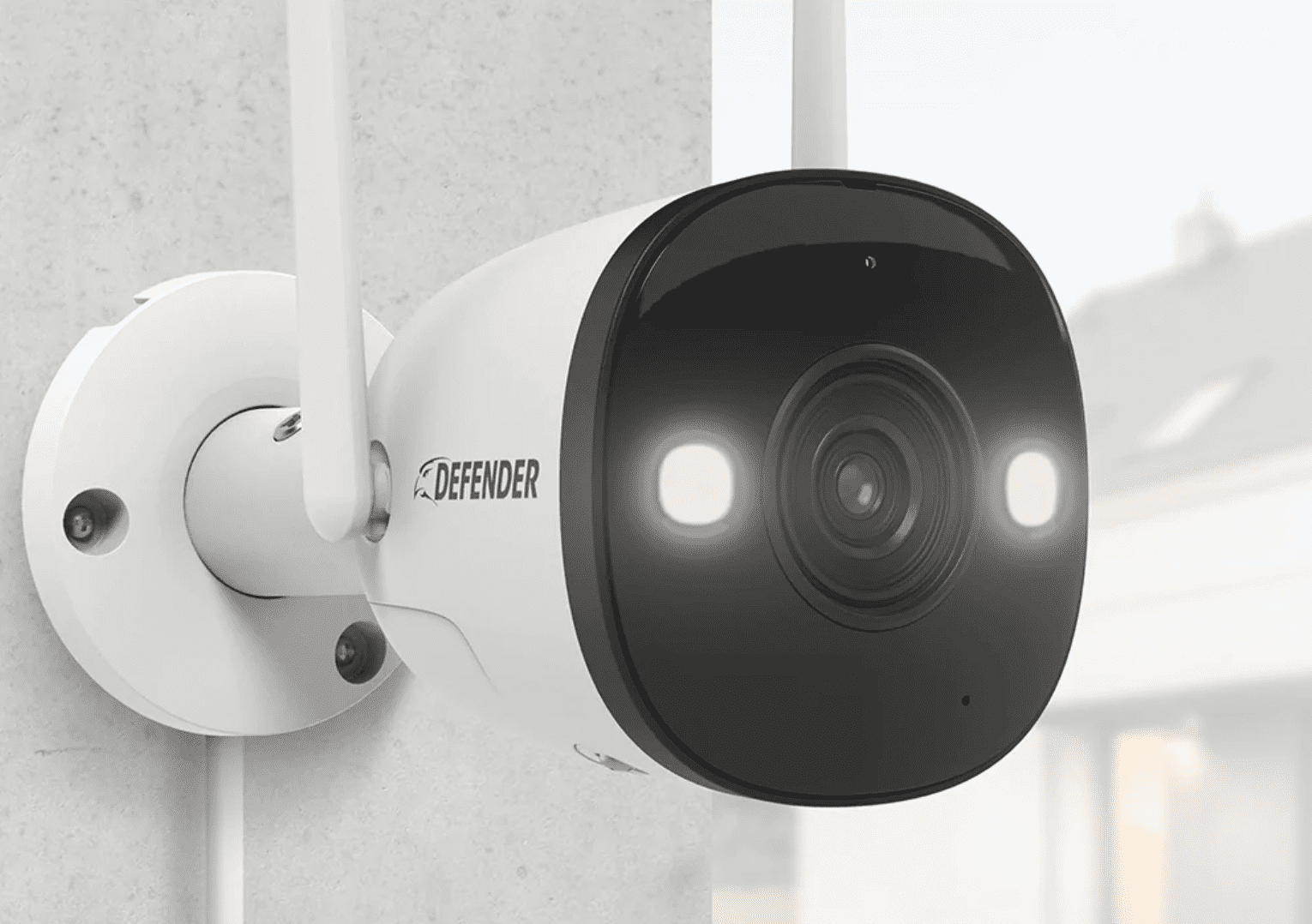 A slight step down from the Sentinel, the Guard is still a formidable camera for folks looking for something a little less intense. There are two versions of the guard: the standard and the pro.

Both iterations of the Guard are solid, and they’ll likely be all the protection you need depending on how you use them.

That brings us to the final camera Defender offers — and this one is pretty interesting. 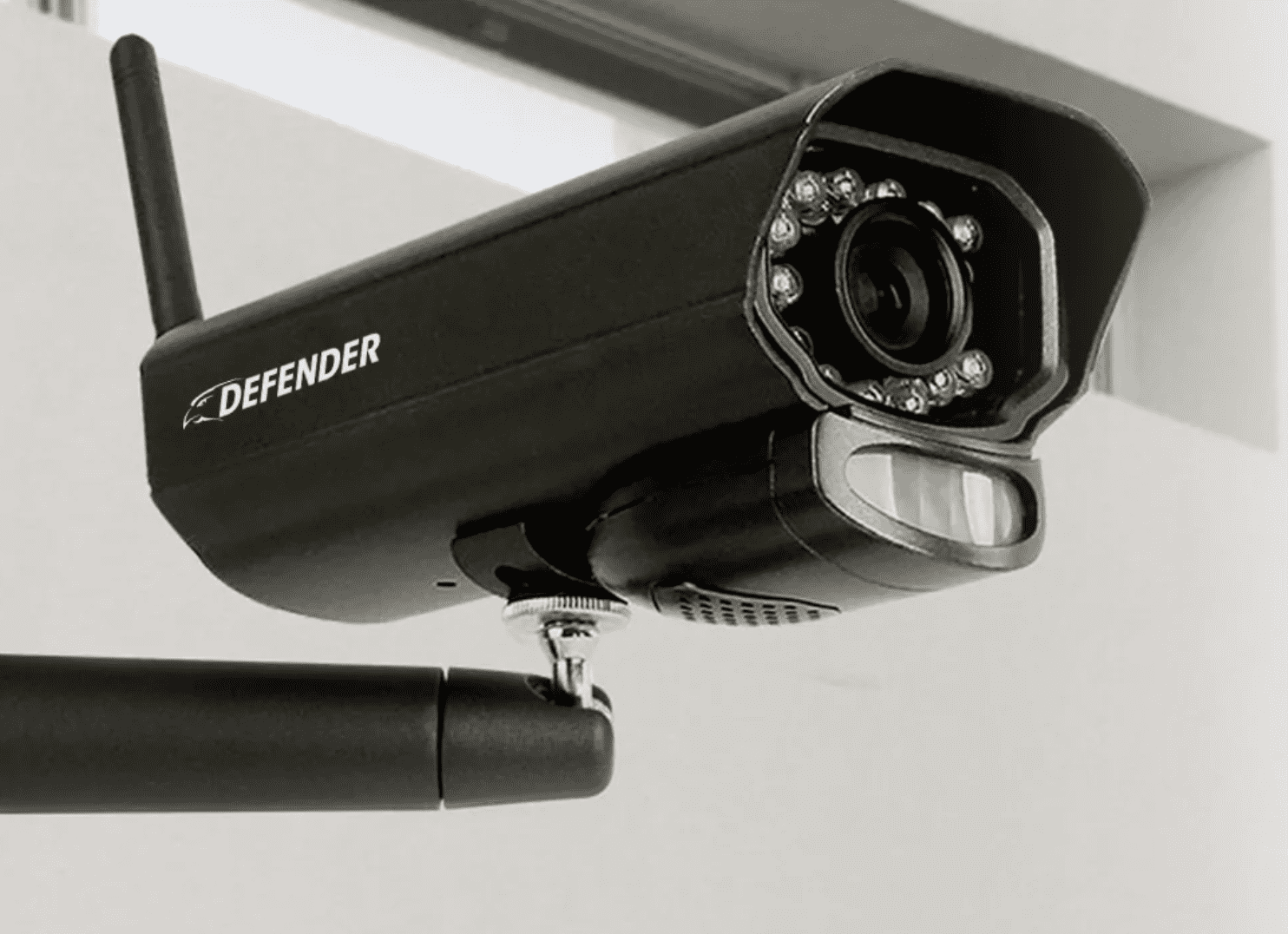 As the name makes obvious, the Phoenix does not require any type of internet to operate. We’re talking old school here. If you’re worried about your system going down if your ISP experiences an outage, the Phoenix is a great option.

Pro Tip: If you’re worried about outages, you may want to consider bolstering your security camera network with some battery-powered equipment. Defender doesn’t offer any, so consider reading our review of Ring. It’s one of the most versatile manufacturers in the industry.

Old school, however, means old school. It offers no advanced features to speak of, except for two-way talk functionality. Its resolution is a meager 640 x 480, so if you’re looking to capture fine detail, you’re not going to find it here.

The ability to run without any sort of internet access can be appealing, though, particularly in remote commercial areas such as scrap yards and marinas. In the right use case, the Phoenix performs really well. What’s more, two-camera packages start at just $285.

Now that you’re familiar with each Defender camera, let’s talk about the company’s family of products.

What Defender gets right, it really gets right. We need to look at the flip side of the coin though. Now for the not so good.

Defender hits it out of the park in some cases, but in others it kind of strikes out. Here’s what I didn’t like so much:

We’ve covered the individual cameras, and I’ve given you a 30,000-foot view of what I think about the equipment. Let’s get down to one of the most important considerations of any security system: the cost.

One of the really great things about Defender’s cameras is how affordable they are.

As you can see, all are pretty reasonable. It’s not as affordable as, say, Yi, but Defender is definitely on the budget-friendly side of the spectrum. If you couldn’t tell from the chart, you start to realize serious savings when you purchase multiple camera kits.

This is where Defender really shines. If you’re looking for multiple cameras, it’s tough to beat these prices. I can’t think of another provider that offers 16 cameras for less than a grand. Maybe Lorex on a good day? Lorex tends to offer tons of sales, but it’s hard to pinpoint exactly when it’s going to offer deals on the bundle you’re looking for.

Another way to save with Defender is to keep an eye on its sale section. We’ve been tracking Defender for a while, and it seems like every week another bundle or accessory is discounted. Black Friday is another great time to shop for Defender. It currently has a sale that’ll get you 35 percent off sitewide. That’s a big deal considering a lot of these cameras are already extremely affordable.

Pro Tip: If you’re looking for other ways to save, check out the “Open Box” section on Defender’s website. These are gently used pieces of equipment you can secure for deep discounts.

That’s about all there is to know about Defender. We’ve covered its costs, equipment, features, and pros and cons. All that’s left is to bring it all home.

For a company born out of a need to provide professional solutions at budget prices, Defender gets a lot right. Its feature list is nothing to sneeze at, its equipment is solid, and its prices are easy to swallow. There’s not a lot to point a finger at.

That said, I’m a little hesitant to give it my full recommendation based on the scores of negative reviews I’ve encountered and some of the technical limitations of its equipment. If you’re looking to protect your home or business without breaking the bank, however, you could do a lot worse than Defender.

Not convinced Defender is right for you? Check out our roundup of the best security cameras of 2023. You’re sure to find something that’ll fit your needs and budget.

Is Defender a good brand?

As far as affordable security cameras go, Defender does a lot right. Some models leave something to be desired in terms of reliability and features, but there’s not much wrong for the price point.

Defender cameras aren’t cheap, but they certainly aren’t expensive. By bundling cameras together in kits, you can save even more.

The Sentinel and Guard models offer 4K and 2K resolution respectively, while the Phoenix model’s resolution is below industry standards.

Do Defender cameras have two-way talk?

Most Defender cameras have two-way talk functionality, except for the Guard 2K.

Yes, the flagship model, the Sentinel, is powered over Ethernet.