Interested in LifeLock, but wondering if they have a free trial? Learn about the different LifeLock trial options below. 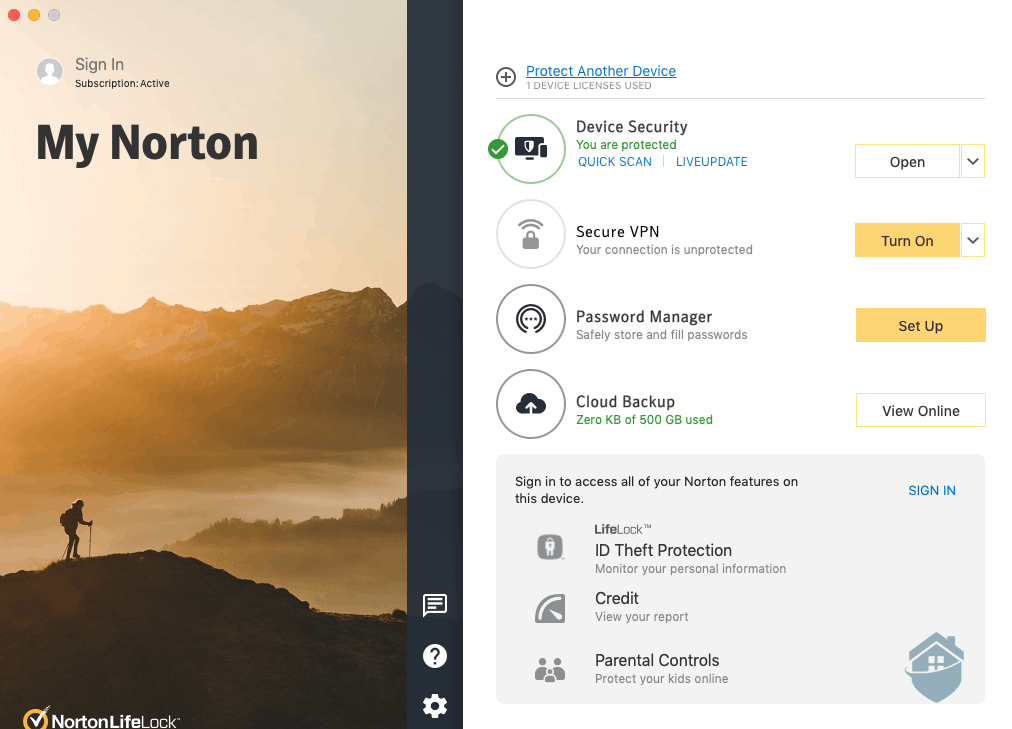 The Federal Trade Commission (FTC) has been tracking fraud reports in the U.S. since 2001.1 Until about 2015, it was a steady haul upwards. Then, from 2016 to 2020, the increase in fraud cases looked like the Hillary Step. (That’s a 40-foot wall of vertical rock if you’re not up on your Everest lore.) At the very top of the list is identity theft.

In other words, it’s easy to understand why so many law-abiding citizens with savings, medical plans, and clean criminal records have flocked to identify theft protection programs in the past four years. The problem is, once you make the decision to turn to ID protection pros, things can get tricky: It’s often too many pricing tiers, with too many features you know nothing about.

That’s where free trials can make a huge difference — even for industry giants like LifeLock, one of the Best Identity Theft Protection plans on the market. If you’ve been thinking about a LifeLock subscription, but are still on the fence, here’s everything you need to know about their free trial, plus a few insider tips.

Even if you know nothing about LifeLock, you probably know Norton, LifeLock’s parent company. Norton antivirus software is everywhere. In fact, it’s probably protecting one of your devices right now.

LifeLock has been around for a while, too. In fact, when LifeLock hit the market in 2005, they were one of the first names in identity theft protection. Today, their 5 million-plus customers are proof that LifeLock is doing something right.

That said, if you’re new to LifeLock, their product line can be a bit of a head-scratcher. Talk about plans and options! It’s enough to say that LifeLock has divided its plans — which range from basic to premium — into packages that include Norton malware protection and packages without it.

Why am I mentioning this up top? Because the duration of your free trial will depend on whether you sign up with a Norton 360 and LifeLock bundle or just LifeLock. In my opinion, combining Norton 360 (device protection) and LifeLock is the best way to experience LifeLock. ID theft and malware protection should go hand in hand. Besides, if you absolutely don't want Norton 360, you can downgrade to a LifeLock-only plan once the trial period is over (more on this below). However, there's one downside if you choose to trial the bundle, as I'll explain below.

Pro Tip: Keeping your devices free of bugs, ransomware, and assorted bad code is a huge part of good digital hygiene. But take it from the pros: staying bug-free is almost impossible without some kind of malware protection software.

Do you want to trial LifeLock for seven days or 30 days? To try LifeLock for 30 days, you need to choose a LifeLock-only plan, either the Standard, Advantage, or Ultimate Plus. It doesn't matter if you choose a monthly or yearly subscription, the first 30 days will be free and LifeLock will charge your payment method only once the trial is over.

But if you want to trial the Norton 360 plus LifeLock bundle, you only get seven days and you must choose a yearly subscription. The same rules apply: LifeLock won't charge you in the first seven days, but once the trial is over, you'll automatically get a bill for a one-year subscription of your plan of choice. By the way, your only options are Norton 360 with LifeLock Select (entry-level ID theft protection) and Norton 360 with LifeLock Ultimate Plus (highest tier).

Not to bring this ID theft protection party crashing down, but in the event that you don’t want to continue with LifeLock, the first thing you’ll need to do is deactivate auto renewal. This is pretty standard operating procedure for free trials. You can do that by signing in to your LifeLock account, and then clicking “Manage my account.”

Did You Know: Totally new to ID theft protection? Welcome aboard. Check out our ID Theft Protection Buyer’s Guide to learn about all the types of ID theft out there and what you can do to start protecting yourself.

Insider Tip 2: Downgrading My LifeLock Subscription After the Trial Period

Previously, I mentioned that you could divide LifeLock subscriptions into two general categories: options with Norton malware protection (they call these Norton 360 with LifeLock) and those without (plain LifeLock). See below for more specifics.

That’s worth pointing out for readers who might have their own virtual private network (VPN) subscription with malware protection. There is no reason, in other words, why you can’t combine best-in-class ID theft protection with a first-rate VPN.

Which LifeLock Plan Should I Trial?

While prices won’t mean anything for a free trial (if you choose not to keep using LifeLock), they will be a factor if you decide to continue with LifeLock. So here’s a quick breakdown.

If you choose to trial a LifeLock-only plan for 30 days, your options are Standard for $7.99 monthly, Advantage for $15.99 monthly, and Ultimate Plus for $23.99 monthly. If those figures sound steep, keep in mind that they're the more expensive monthly rates. Annual plans, as always, are cheaper. To give you an idea of the savings there, just take the mid-range Advantage plan. Paying yearly, you save $3 per month (that's $36 per year). Not bad.

FYI: Think imposter scams only happen on TV? According to the FTC, in 2020, one out of every five people in the U.S. lost money in imposter scams. The average loss was $850.

It’s true that one major difference in LifeLock’s plans is the amount they’ll reimburse you for in the event of actual stolen funds.

But, honestly, the stars would have to be seriously misaligned for you to get scammed to the tune of a cool mil during your LifeLock trial period. So I’d say the extra stolen fund reimbursement isn’t a huge incentive to trial Ultimate Plus.

However, while you’re choosing a LifeLock option to trial, it’s worth considering what kind of protection you’re going to want over the long haul.

We have three agencies that issue credit reports in the U.S. (TransUnion, Equifax, and Experian). If there’s a problem with just one of them — and you’re unaware — you could be in for some serious financial trouble down the line. If you think you wouldn’t be able to sleep at night without complete credit monitoring, I’d definitely recommend trialing Ultimate Plus.

Otherwise, the lighter, less expensive Select or Advantage plans would be my free trial choice.

*After the first year

LifeLock Ultimate Plus monitors your credit at all three credit bureaus as well as your savings and home title.

Pro Tip: If you’re the victim of a data breach, it means a bad actor has gained access to your personal info by exploiting a vulnerability in a third-party website or app. Many times, hackers steal email addresses and passwords (to sell on the dark web), but they also loot phone numbers, Social Security numbers, and addresses.

Considering that many identity protection services don't offer a free trial, LifeLock's up to 30-day trial is pretty generous. We're talking about 30 days of free service. Plus, once your trial ends and you start paying, you'll get 60 days to cancel and request a refund (if you go with a yearly plan; 14 days if you choose a monthly option).

Experian’s IdentityWorks plans, including both Plus and Premium, offer 30 days free. So does IdentityForce’s Ultimate Secure option. However, not all ID theft protection providers do.

Bottom line? LifeLock is particularly confident you’ll like what you see, and has put its “services” where its mouth is.

Did You Know: Fraudsters can hack their way into your home title and use it to take out loans in your name. That’s where home title monitoring is a lifesaver (available with LifeLock Ultimate Plus). With your house title under lock and key, if a thief ever uses it for nefarious purposes, you’ll get an instant alert.

Is LifeLock’s Free Trial Worth It?

Committing to an identity theft protection plan isn’t quite the same thing as choosing a VPN or antivirus software. Yes, hiding your digital footprint is absolutely crucial these days. So is hacker-proofing your laptops, mobiles, and tablets with a VPN. But protecting the title to your home? Your life savings? Your very identity? There’s a little more at stake there.

Because of that extra risk, I really believe you should be absolutely comfortable with the ID fraud protection plan you choose. You should have the right features, and at least a month to familiarize yourself with the software that will end up being your “ID theft protection control center.”

And that’s exactly what LifeLock’s free trials will give you, no matter which one you choose: access to the full gamut of LifeLock’s many identity fraud protection features and enough time to test them all.

FYI: Nothing’s off limits to bad actors, not even funerals. In 2020, U.S. consumers reported over 1,300 cases of funerary services fraud.

Does LifeLock have a free trial?
Yes, it does, for both its monthly and yearly plans.

How many days can I test LifeLock for free?
That depends on which plan you try. If you trial a LifeLock-only plan, you have 30 days regardless of whether you go with a monthly plan or a yearly plan. But if you go with a LifeLock plus Norton 360 bundle, you only have seven days.

Can I trial all of LifeLock’s plans?
Yes, you can trial all LifeLock plans. LifeLock-only plans — Standard, Advantage, and Ultimate Plus — come with a 30-day free trial. Norton 360 and LifeLock bundles, meanwhile, come with a seven-day trial.

If I trial Norton 360 with LifeLock, can I downgrade to a basic plan?
Yes, but you have to cancel your Norton 360 subscription first and then sign up for your new plan.

Does my free trial come with a VPN?
Yes, every Norton 360 with LifeLock plan comes with a VPN. The number of devices you can protect ranges from five (Select) to unlimited (Ultimate Plus). With the Advantage plan, you can use your VPN on 10 devices.