Across the American political spectrum, no documents are more revered than the Constitution and Bill of Rights. No child goes without studying their importance in school, and politicians of every stripe repeatedly invoke their principles.

But despite the hallowed place these amendments enjoy in our culture, our objections and interpretations are another matter altogether. When it comes to individuals’ opinions about what the Constitution does and should include, disagreement and debate are time-honored American traditions. As Thomas Jefferson noted, “It is every Americans’ right and obligation to read and interpret the Constitution for himself.”

We asked over 1,000 Americans to do exactly that, surveying their opinions about our government’s founding documents and which changes they’d propose today. We also tested their knowledge, quizzing them about details of the Constitution and Bill of Rights to gauge which demographics were most informed. Our findings reveal which fundamental changes have the most backing, and which principles remain untouchable in the mind of the American public. Read on to see how your constitutional convictions compare to that of other people across our more perfect union. 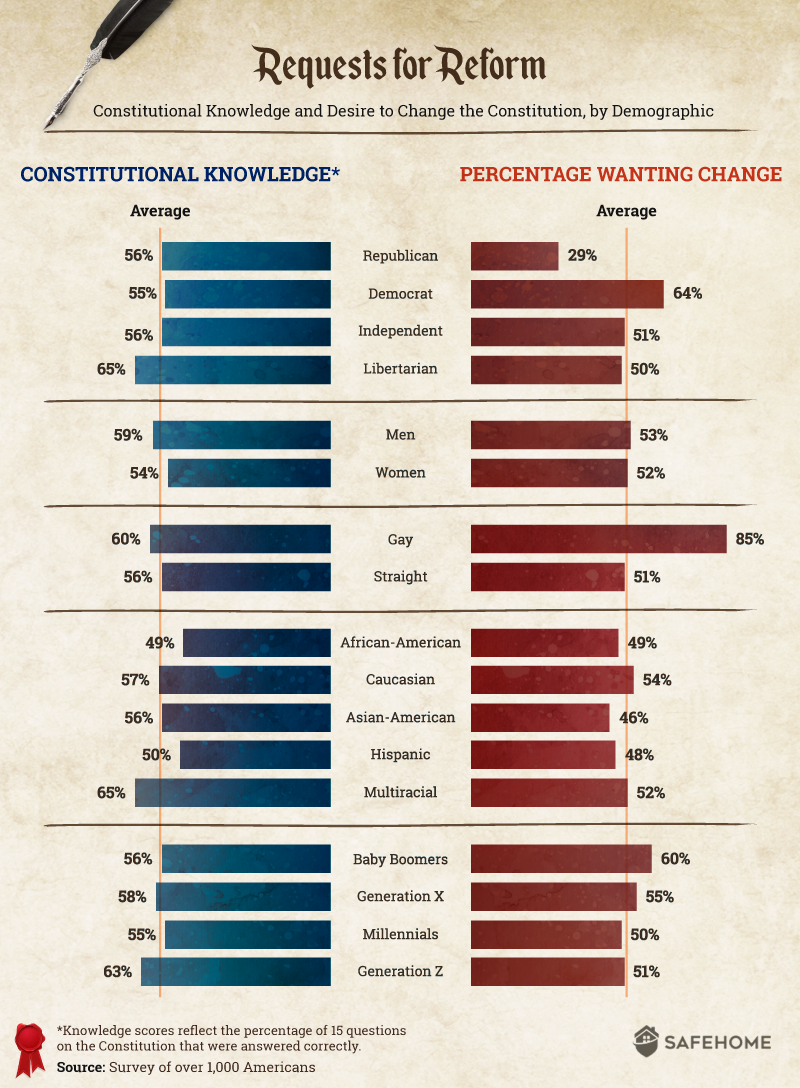 Among America’s three largest political factions, constitutional knowledge was roughly equal (55 percent, on average, for Democrats and 56 percent for Republicans and independents). Libertarians, however, were significantly more conversant of the Constitution’s details, leading all political affiliations with an average score of 65 percent. Democrats, conversely, were the party most likely to desire change to the founding document. Their eagerness for an altered Constitution was surpassed only by that of one other demographic: respondents identifying as gay, of whom 85 percent wanted changes to be made.

While Caucasian participants had the greatest desire of any ethnic group to see the Constitution amended, multiracial people possessed the most knowledge. This demographic might have particular reason to become reacquainted with constitutional law of late, as 2017 marked the 50th anniversary of Loving v. Virginia, the Supreme Court case that ruled interracial marriage protected by the 14th Amendment. Putting their elders to shame, Gen Zers had the best constitutional knowledge of any generation surveyed. Either civic consciousness is strong among these youngsters – or they’re just a bit closer to their last U.S. government exam.

Education and Willingness to Edit 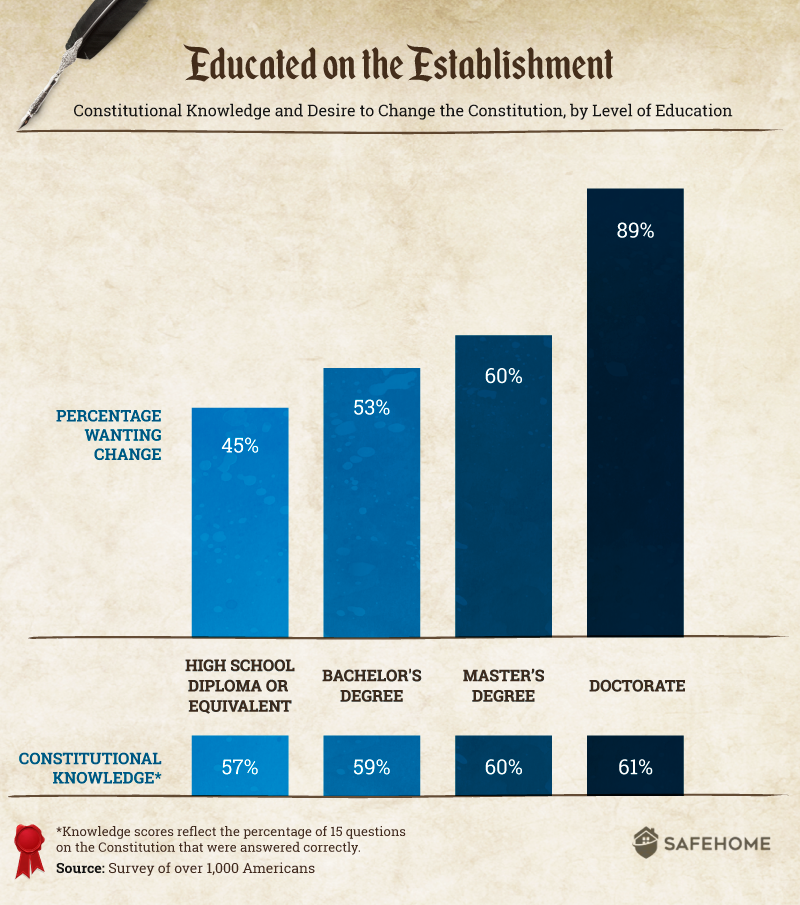 While constitutional knowledge did increase at each level of educational attainment, the improvement was far more modest than one might assume. Indeed, those with a doctorate scored just four percentage points higher, on average, than those with just a high school diploma or equivalent. Those with a bachelor’s and master’s degree fell in between, indicating that postsecondary schooling may not impart much additional knowledge of the Constitution’s content.

There was a much more robust connection between advanced degrees and the desire for constitutional amendments, however. Just 45 percent of those with a high school diploma said they’d want a change to the Constitution, whereas 89 percent of those with a doctorate said the same. This enthusiasm among the well-educated could relate to some different causes – including access to education itself. Over the last several years, support for an amendment guaranteeing the right to high-quality education has gained steam in academic circles. 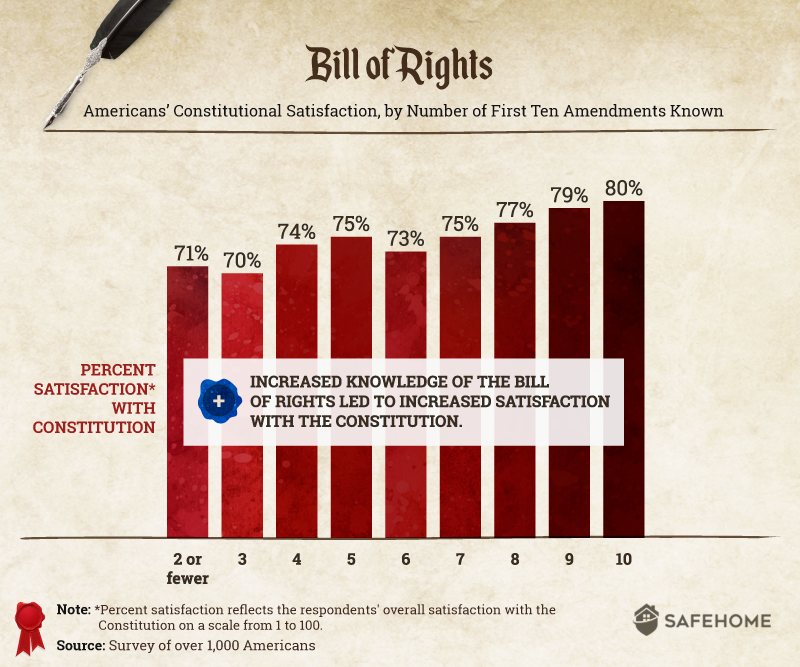 In addition to testing our respondents’ constitutional knowledge, we also gauged their overall satisfaction levels by asking them how satisfied they felt with the historic document on a scale of one to 100, with 100 being completely satisfied. With some minor exceptions, our data suggested a strong knowledge of the Bill of Rights corresponded to elevated levels of satisfaction with the Constitution. The explanation for this phenomenon might be quite simple: You may be more tolerant of the original document’s flaws if you’re well-versed in subsequent amendments. Among those who could correctly identify 10, the average satisfaction level was 80 percent. 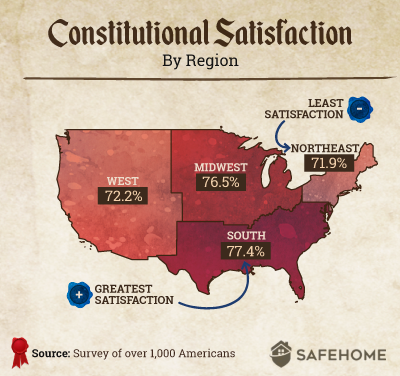 Lack of familiarity with specific amendments did not translate to deep dissatisfaction with the Constitution, however. Even among respondents who identified two or fewer amendments correctly, average satisfaction with the Constitution still reached 71 percent. If that level of amendment comprehension seems strikingly low, recent research suggests otherwise. One 2017 poll revealed, among other dismal measures of civic knowledge, less than half of participants knew the First Amendment protected free speech.

Satisfaction with the Constitution did vary by region, with residents of the South recording the highest levels overall. Perhaps this should come as no surprise in the nation’s most reliably Republican region, as many party luminaries emphasize fidelity to the Constitution as a key tenet of their beliefs. The Midwest was only a fraction behind, however, with an average satisfaction rating of 76.5 percent. The West and Northeast took third and fourth place respectively, but average satisfaction levels surpassed 70 in these regions as well. 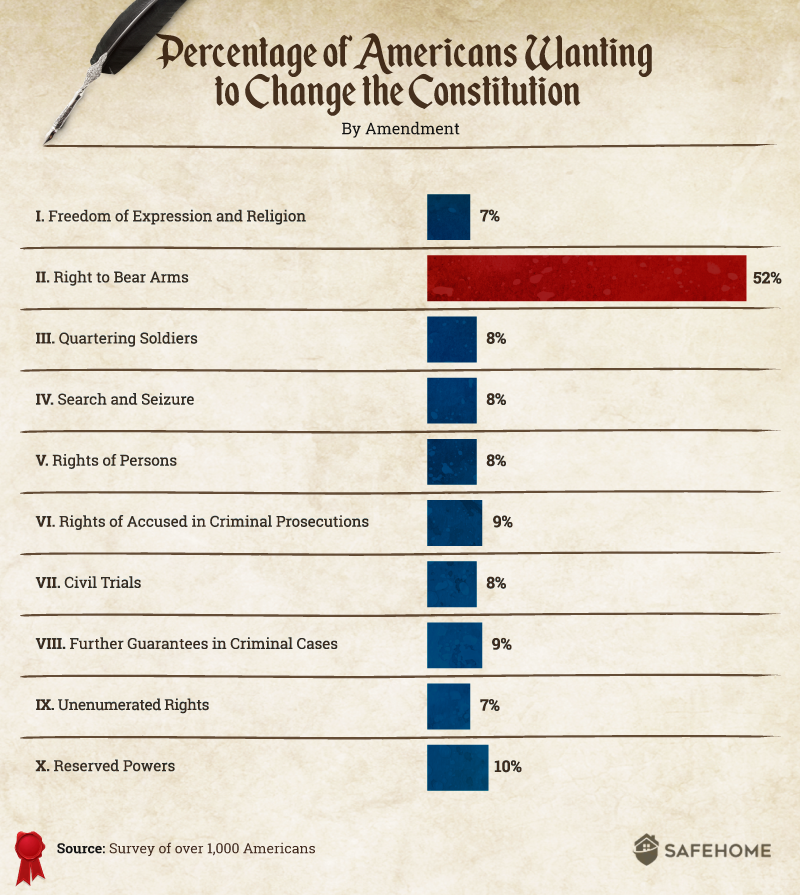 Regarding which amendments provoked the most desire for change specifically, the ever-controversial Second Amendment far surpassed any other. In light of fervent support on both sides of the gun control debate, many experts have despaired about the prospect of bipartisan agreement on the regulation of firearms. Although polling suggests a majority of Americans would support stricter gun laws, just 52 percent of our respondents said they’d like to see the Second Amendment replaced or altered. Perhaps this finding suggests some participants feel stricter laws can be enacted within the amendment’s bounds without requiring a sweeping constitutional change.

Other amendments prompted roughly equivalent levels of desire for change. One in 10 people wanted alterations to the 10th Amendment, which reserves unspecified powers for the states. Perhaps this desire is prompted, in part, by contradictions among state and federal laws on the issue of marijuana, which some view as a classic example of states’ rights supremacy. Meanwhile, the First and Ninth Amendments encountered the least opposition, with merely 7 percent saying they should be changed. 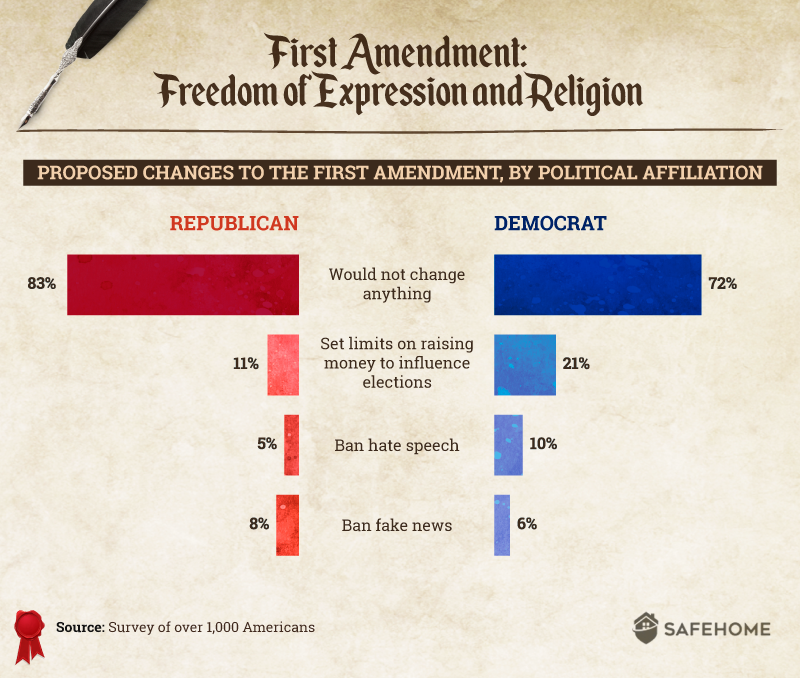 When asked which amendments respondents would like to see altered, very few cited the First Amendment; however, after we showed participants particular examples of changes, like banning hate speech or fake news, more people began to perceive a need for change. Concerning support for the First Amendment, Republicans endorsed it most ardently.

Objections commonly stemmed from different controversial court rulings, including the Supreme Court’s decision in the Citizens United case, which enabled unlimited corporate political spending as a form of free speech. More than 1 in 5 Democrats felt a First Amendment change should address this issue, as did over 11 percent of Republicans. Almost 1 in 10 Democrats supported a ban on hate speech, while Republicans were more likely to support prohibiting “fake news.” 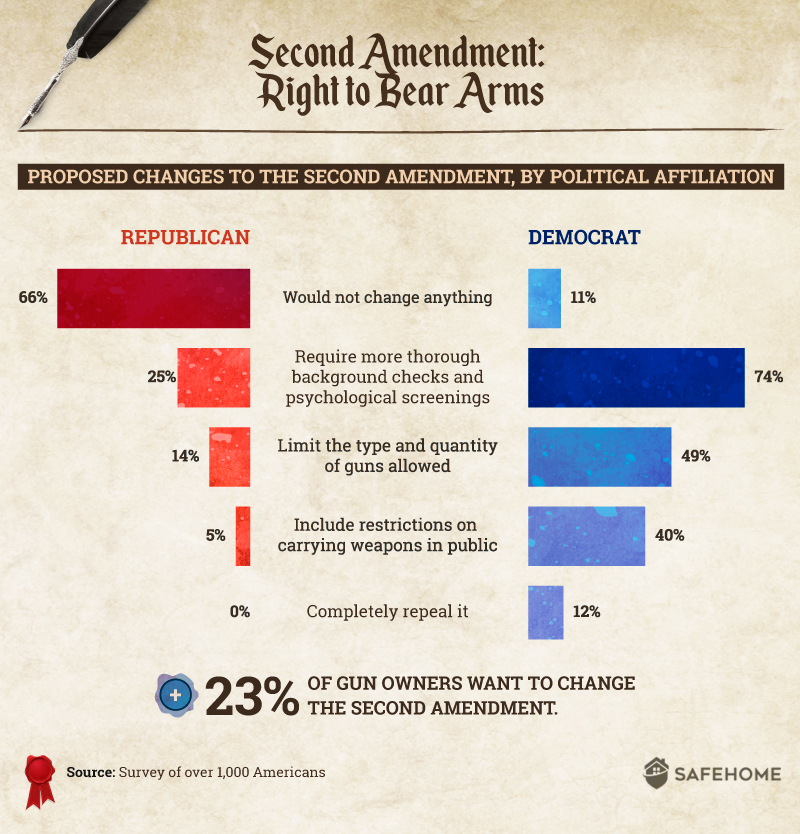 Many of the Republican and Democrats surveyed saw eye to eye when it came to gun control. When asked whether or not changes were needed to the Second Amendment, 66% of Republicans said “no.” Twenty-five percent of Republicans wanted to require more thorough background checks and psychological screenings to purchase a gun. Moreover, 23 percent of gun owners said they want to change the Second Amendment, although they disagree on how.

On the other side of this debate, 89 percent of Democrats wanted to see changes to the right to keep and bear arm. Contrary to a prevailing sentiment that Democrats want to take everyone’s guns away, only 12 percent said they would completely repeal the Second Amendment. Among Democrats, requiring more thorough background checks and psychological screenings was the most popular proposed change, although limiting the type and quantity of guns also garnered significant support. Both of these options came to the fore after the 2017 mass shooting in Las Vegas, as Democrats proposed an assault weapons ban. President Trump suggested the massacre stemmed from mental health issues, but later rejected calls for expanded screening measures. 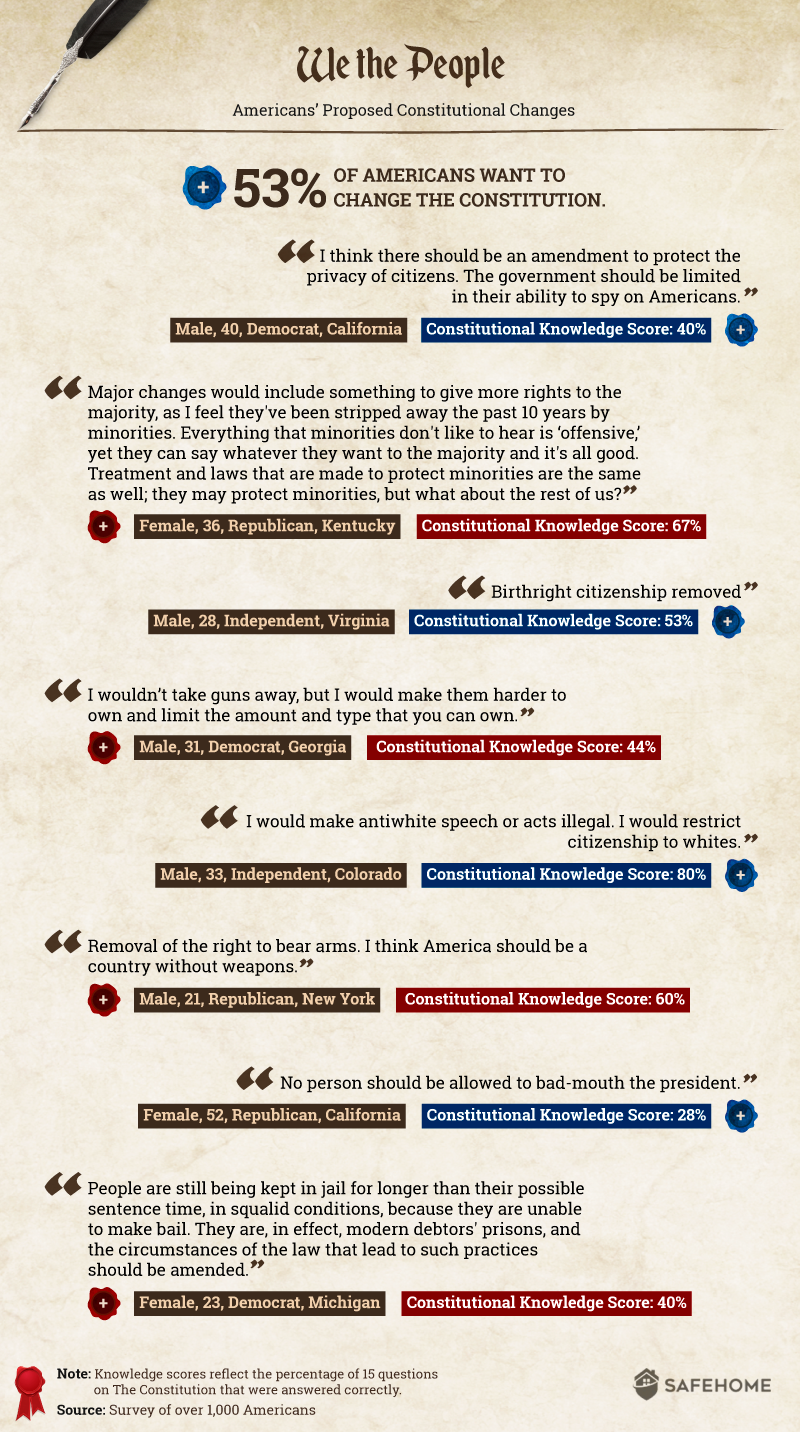 When participants shared their opinions in written statements, more common ground emerged than one might expect in our polarized political times. In one striking example, two men described their dissatisfaction with the Second Amendment – one a Democrat, the other a Republican.

Unfortunately, other participants asserted positions that seemed to contradict the nation’s central ideals. One 33-year-old independent from Colorado advocated a racist hierarchy that would prohibit minorities from citizenship. Another independent from Virginia suggested an end to citizenship rights for all those born in this country. While such a policy would require a constitutional amendment to enact, similar ideas have gained traction in some conservative circles as a means to exclude citizenship rights from children of undocumented immigrants even if they were born in the U.S.

Many Views, One Document

Although the Constitution enshrined the ideal of a “more perfect union,” our findings reveal a nation deeply divided on some of our nation’s founding principles. But even in these times of bitter disagreement and partisan discord, it’s important to appreciate the gift inherent in our differing opinions. In some ways, the possibility of a passionate debate is our Constitution’s greatest strength.

Our government enables freedom of expression and protects the rights of the minority against the tyranny of the majority. These are privileges that many people around the world simply don’t possess. So the next time you’re tempted to tear someone a new one over his or her political opinions, pause for a moment before attacking. After all, that frustration is what democracy feels like – and it’s a beautiful thing.

We polled and collected responses from 1,007 verified Americans. Forty-eight percent of participants were female, and 52 percent were male. Participants ranged in age from 18 to 81 with a mean of 37.73 and a standard deviation of 11.85. We asked each respondent if they understood what was protected by each of the first 10 amendments. We then asked each to explain three specific amendments and used those answers to spot-check their assertions of understanding the aforementioned amendments. Next, we asked five additional questions about the Constitution in general. The percentage of the total 15 questions answered correctly yielded each respondent’s “Constitutional Knowledge” score.

You’re welcome to use our findings and images for noncommercial purposes, and we hope your audience enjoys our work. We just ask that you attribute us fairly with a link to this page when you share our content. While giving proper credit isn’t a constitutional requirement, it’s simply the right thing to do.