A Nation of Neighbors

Love them or hate them, you’re stuck with your neighbors … until a for-sale sign pops up, of course. Knowing the people who live nearby can ensure the safety of your home – an extra pair of eyes on your house while you’re away doesn’t hurt – but being a nice neighbor is also just the right thing to do.

Although our neighbors may be close in proximity, how close are they to us personally? We surveyed over 1,000 Americans and asked them whether they had ever completed 10 neighborly actions. Their “neighborly scores” represent the percentage of actions completed. We then compared these scores across demographics to help understand what makes a great neighbor. Continue reading to see how well you fare in the realm of neighborly kindness. 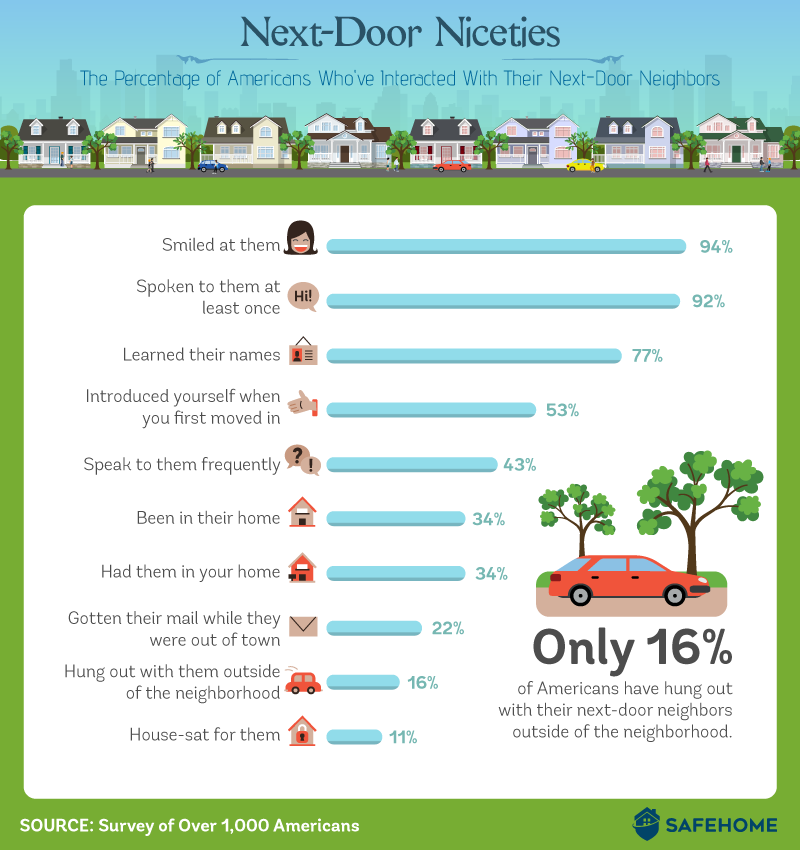 Unless you’ve just moved in or never left your house, the likelihood of having at least seen your next-door neighbor is pretty high. But how much interaction do Americans really have with the people next door?

Smiling at a neighbor was the most common neighborly act completed, with 94 percent of respondents participating in this form of interaction. Ninety-two percent have spoken to their neighbor at least once. While these acts are surely a mark of a nice neighbor, they don’t necessarily guarantee you’ll be invited to the next holiday potluck.

The rest of the 10 neighborly acts analyzed (including speaking frequently, collecting a neighbor’s mail while he or she is out of town, and hanging out at each other’s homes) were only completed by a fraction of participants. And when it came to hanging out outside of the neighborhood, only 16 percent of participants had done so. 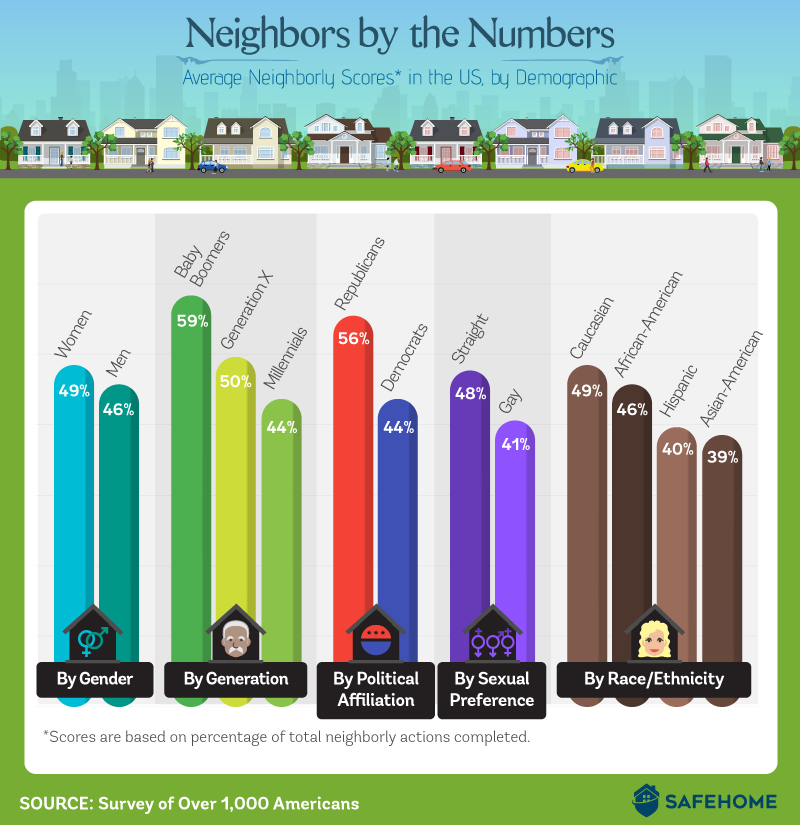 Those belonging to the oldest of the three generations analyzed appeared to make the nicest neighbors. Baby boomers had the highest neighborly score across any demographic studied, creating the largest gap with millennials. The smallest difference between average neighborly scores was between men and women, who had a score of 46 percent and 49 percent, respectively. Republicans also claimed the title of nicer neighbor compared to their political counterpart, with a 56 percent score compared to Democrats’ 44 percent.

Perhaps the most interesting finding was the demographic with the lowest average neighborly score. Asian-Americans participated in the least amount of neighborly actions, resulting in the lowest score across all demographics (39 percent), followed closely by Hispanic participants (40 percent). 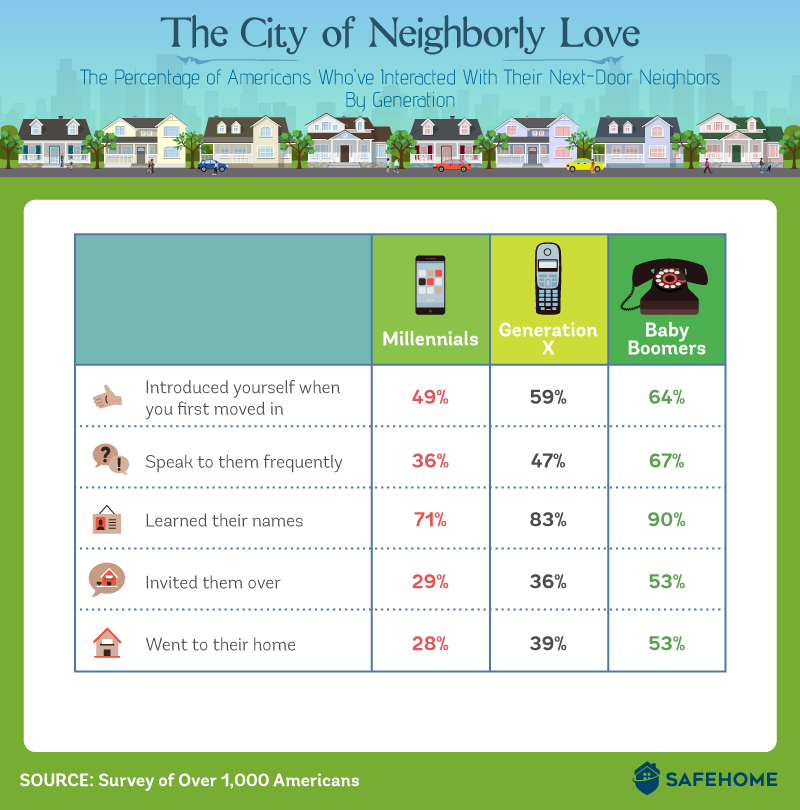 We know baby boomers are the nicest neighbors of any generation, but how do the generations compare when it comes to specific acts? Our study found baby boomers continued to have the highest scores for all 10 actions. Even with the aid of instant communication, millennials revealed themselves to be somewhat anti-social by not inviting their neighbors over to their homes and they are more likely to have a doorbell camera. They were also the only generation where less than half claimed to have introduced themselves to the person living next door. 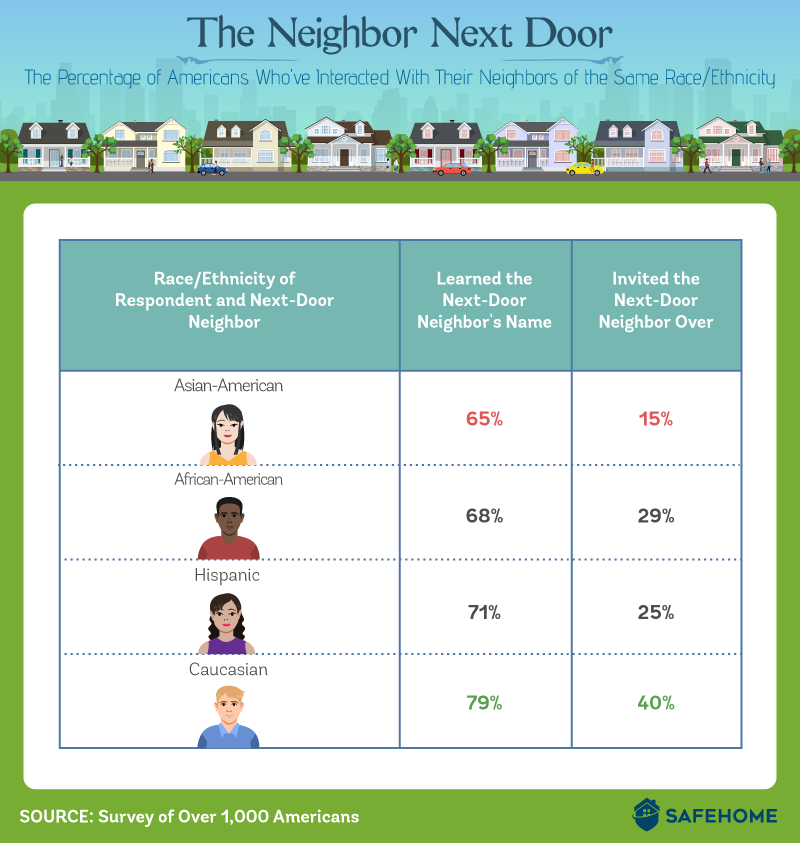 Next, we were interested to see how respondents interacted with their neighbors of the same race or ethnicity. When it came to learning their neighbor’s name, 79 percent of Caucasian participants checked this off their list. They also scored the highest when it came to inviting their Caucasian next-door neighbor to their home.

Asian-Americans scored the lowest for both acts, with 65 percent learning their Asian-American neighbor’s name and only 15 percent inviting them over. An increase in neighborliness between people of the same race or ethnicity may be because people tend to be friends with others who are similar to oneself.

Time to Be Nice 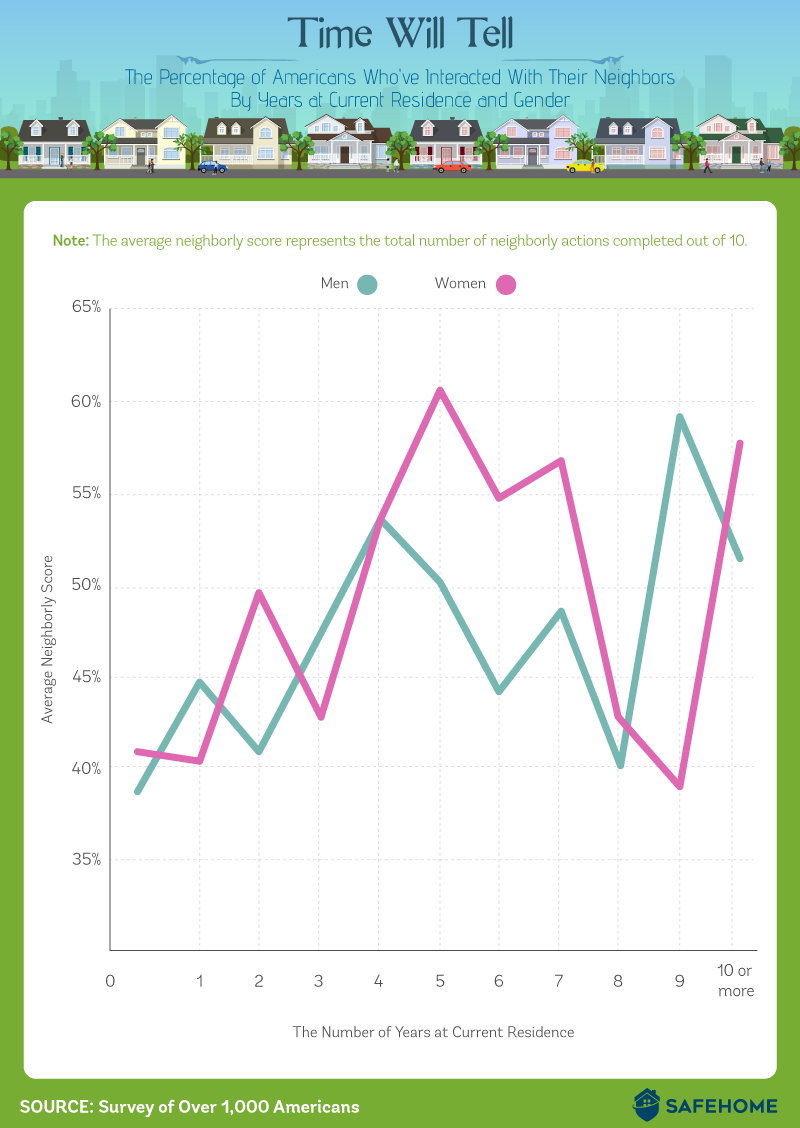 The total number of neighborly actions carried out differed between men and women – as well as how long a person lived in the neighborhood.

Women completed an average of 60 percent of neighborly actions after living in the same residence for five years, a time when men began completing fewer neighborly niceties. Although men had their moments, women tended to be more neighborly overall. 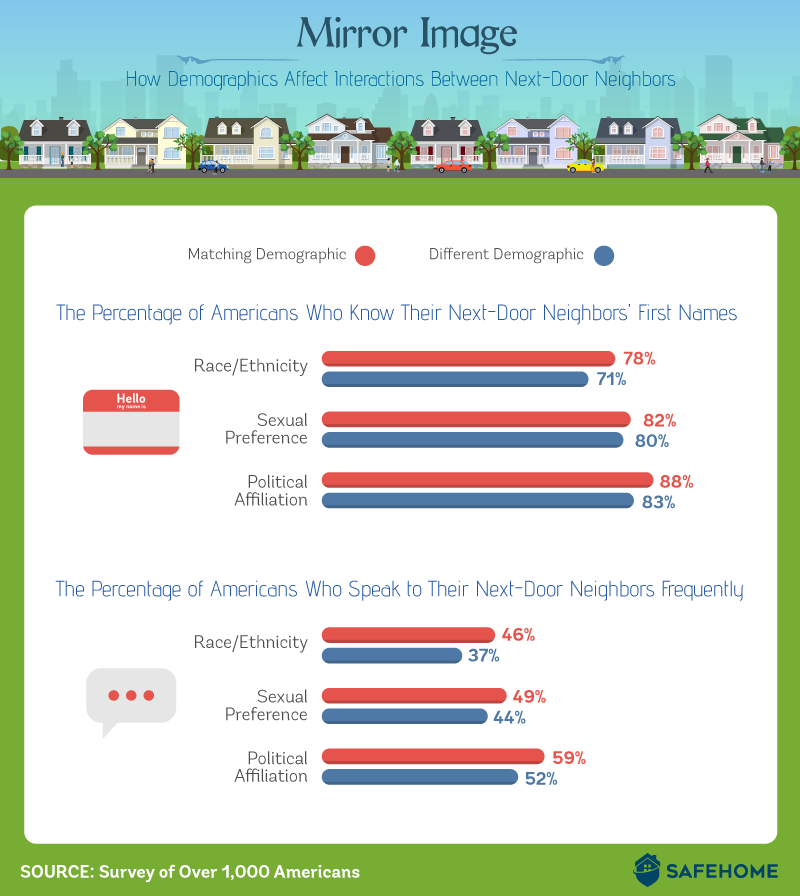 Knowing a neighbor’s first name doesn’t equate to speaking frequently, though. Forty-six percent of people often spoke to their next-door neighbor with the same race or ethnicity, nine percentage points more than when their neighbor was of a different race or ethnicity.

Participants were also more likely to speak with politically like-minded neighbors frequently. Perhaps being a part of the same demographic gives neighbors a reason to connect, or at least gives them something to talk about.

Knowing your neighbors doesn’t just extend your social circle – it can also have a good effect on your mental and physical health and increase the security of your home. You may even have a friend, partner, confidante, or baby-sitter living next door that you never even knew existed. So whether the locals in your neighborhood become your friends or simply an extra set of eyes to watch your home while you’re away, it’s always nice to have another familiar face (or even security cameras) near the place you call home.

We surveyed over 1,000 Americans and asked whether they had ever completed 10 neighborly actions (smiled at them, spoke to them at least once, learned their names, introduced oneself when first moving in, spoke to them frequently, been in their home, had them in one’s home, got their mail or newspaper while they were out of town, hung out with them outside of the neighborhood, and house sat for them).

The number of actions they completed resulted in their “neighborly score.” We also asked about the demographics of our respondents and their next-door neighbors to see how various types of neighbors interact and potentially bond.

Before you get up and get to know your neighbor, we permit you to use the images and content here for noncommercial purposes. Just don’t forget to link back to this page to give the authors proper credit.