In 2014, the FBI reported a robbery every 1.6 minutes in the U.S., a burglary every 18.2 seconds, and a larceny-theft (like pickpocketing or purse snatching) every 5.4 seconds.

This means there were more than three burglaries every minute, 198 every hour, and 4,608 every day. The cost of property crimes that year was estimated to be worth $14.3 billion.

To understand how these statistics affect Americans, we examined FBI Uniform Crime Reporting (UCR) data in 2015 to determine the items thieves most commonly targeted, the states that experienced the highest rates of each infraction, and the times of year that items were more likely to be the subject of theft. Continue reading to learn more.

Stolen Items Across the U.S.

According to FBI data from 2015, the most stolen items were classified as miscellaneous. Like pregnancy tests – which one Walmart loss prevention report identified as among the most commonly stolen items from their stores.

Besides miscellaneous valuables, the most common stolen items across 26 states were jewelry and precious metals. In states like Florida, Texas, Massachusetts, and Colorado, thieves targeted diamonds, gold, silver, and other jewelry more than almost anything else. In April 2017, nearly $150,000 worth of jewelry was stolen from a Miami home. In March 2017, a man was arrested in Dallas for stealing jewelry and gifts from a hotel room before a woman’s wedding. Even celebrities aren’t immune to this targeting – Kendall Jenner and Alanis Morissette were both burglarized earlier this year, with their jewelry as the primary focus.

Clothing was the most stolen item in seven states, including California and Tennessee. In fact, actor and comedian Kevin Hart’s California home was burglarized in 2016, with thieves taking his clothing and other personal items.

Other commonly stolen items across the U.S. included currency (most common in 11 states), office equipment, and electronics. While pets can sometimes be the target of thieves and robbers, livestock was the least common category of stolen items, according to the UCR data. 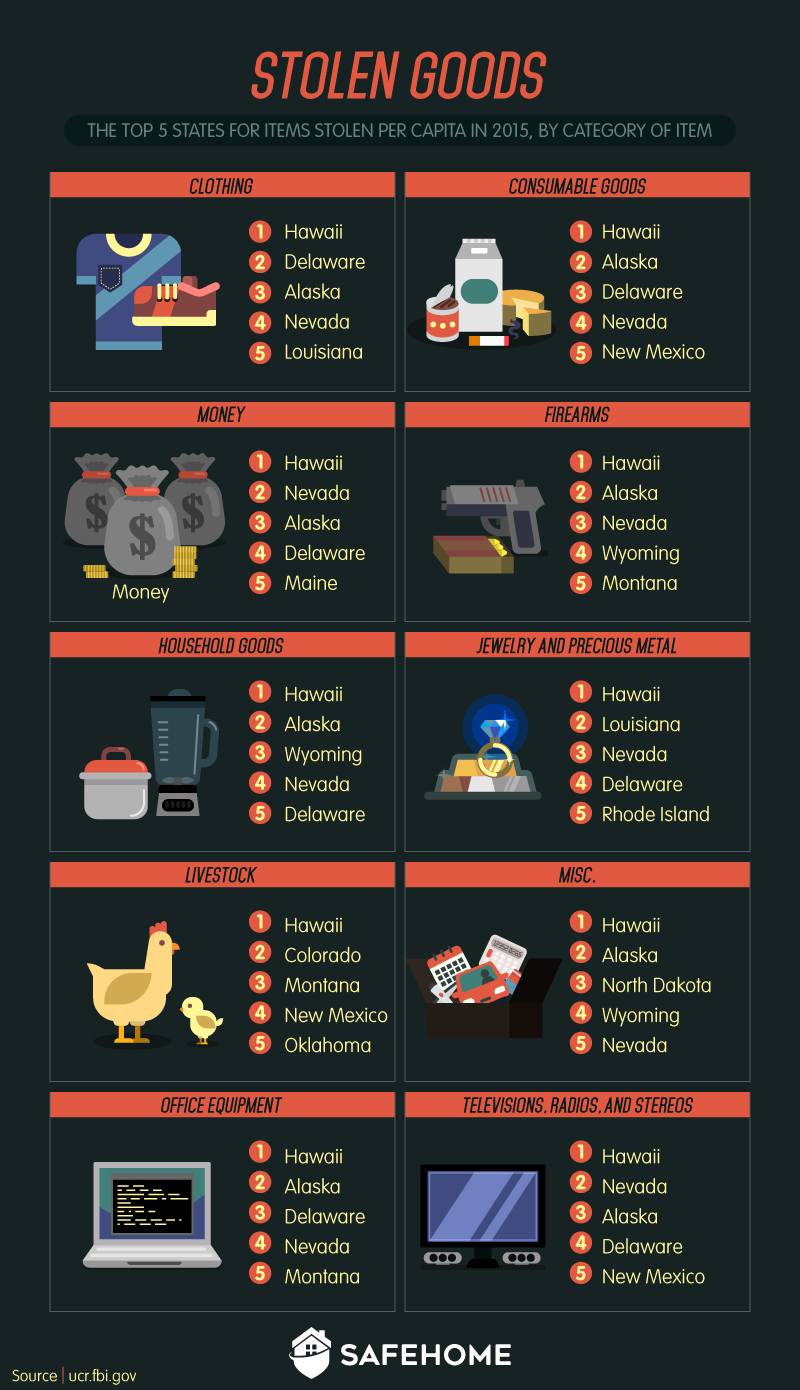 As seen above, we ranked each state by the number of items stolen per capita in 2015. While firearms ranked relatively low, according to the UCR data, they were more commonly stolen in Hawaii than anywhere else in the country – like when two thieves in Ewa stole a handgun (along with police gear) from a local police officer and were later arrested on those charges. Alaska and Nevada also had higher reported instances of stolen firearms.

It All Adds Up 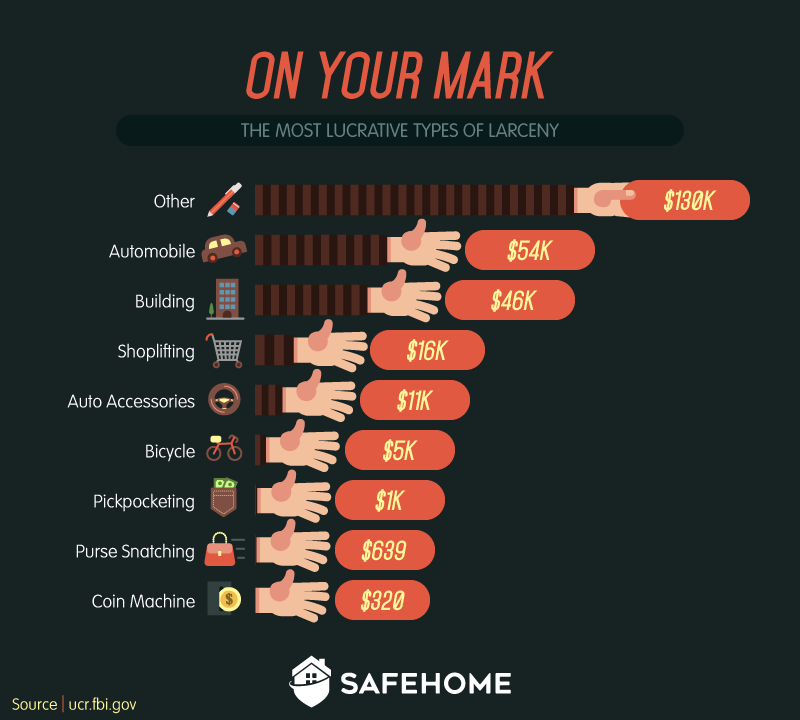 Besides miscellaneous valuables, items stolen from people’s vehicles were the most lucrative types of larceny in 2015. Worth more than $54,000 every year, on average, commonly stolen items from cars and vehicles tended to include items like handguns and smartphones. Even with car insurance, having the full value of these items replaced isn’t guaranteed, and you have to take your deductible into account if your coverage does extend to break-ins and subsequent damage.

Crimes from buildings – including homes and office spaces – accounted for nearly $46,000 in stolen property every month. When it comes to professional spaces, even politicians have been targeted. In 2016, a South Dakota senator’s office was broken into, with the thief running off with internal hard drives from the senator’s computers. In April 2017, six thieves coordinated a robbery from a Georgia Apple store on Easter, getting away with products worth thousands of dollars. 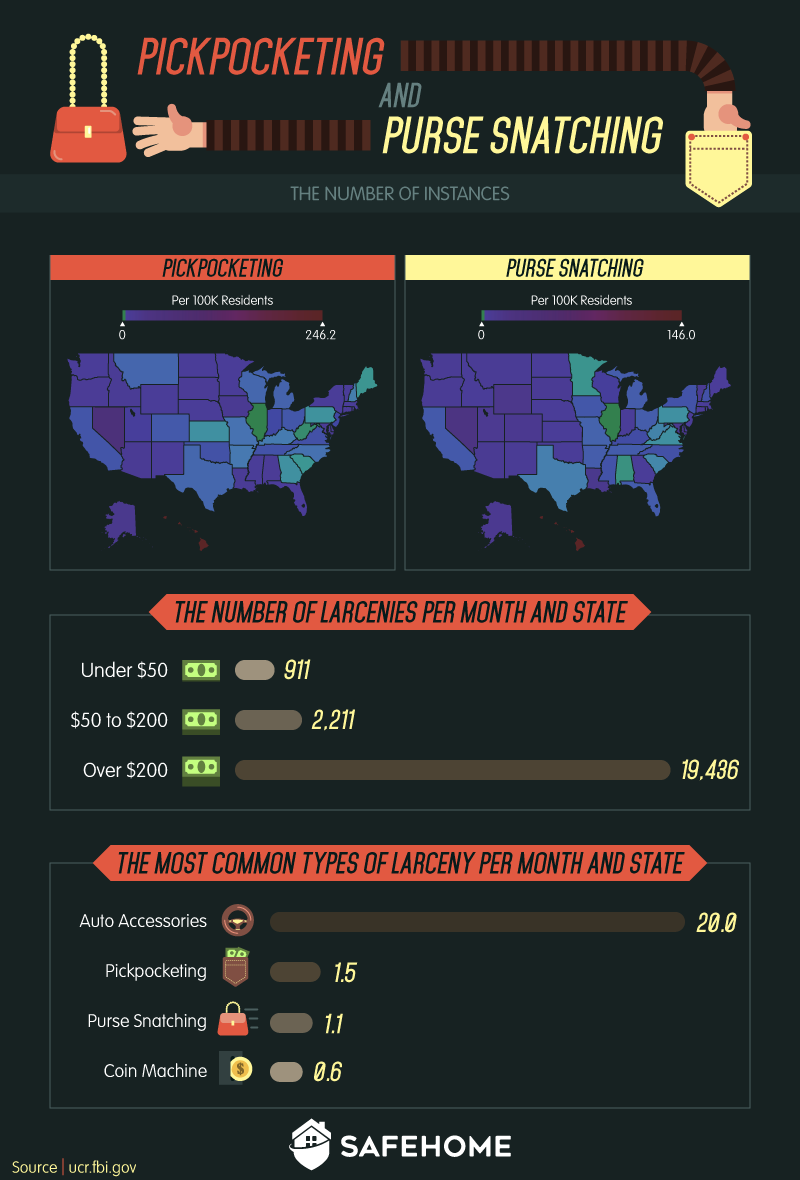 Larceny-theft differs from traditional theft in that it is “the unlawful taking, carrying, leading, or riding away of property from the possession or constructive possession of another,” according to the FBI. This can include bicycles, motor vehicles, accessories from motor vehicles, shoplifting, and pickpocketing.

In 2015, there were more than 246 instances of pickpocketing in Hawaii for every 100,000 residents.  Across the country, there were also more than 173 pickpocketing crimes in 2015 in Washington, D.C., for every 100,000 residents. With thieves occasionally working in pairs, being aware of your surroundings, keeping your hand on your wallet, and keeping your purse close can help you avoid being a victim.

Purse snatching (which can lead to identity theft) was less common in 2015, according to the UCR data, but the highest number of these crimes on a per-capita basis occurred in Hawaii and Washington, D.C.

Across the country, the theft of auto accessories was significantly more common than pickpocketing and purse snatching combined, with nearly 20 crimes occurring each month for every 100,000 residents. Electrical items like navigation systems are often the most common things stolen from cars, and experts recommend making sure these items are out of sight when you leave your car unattended. 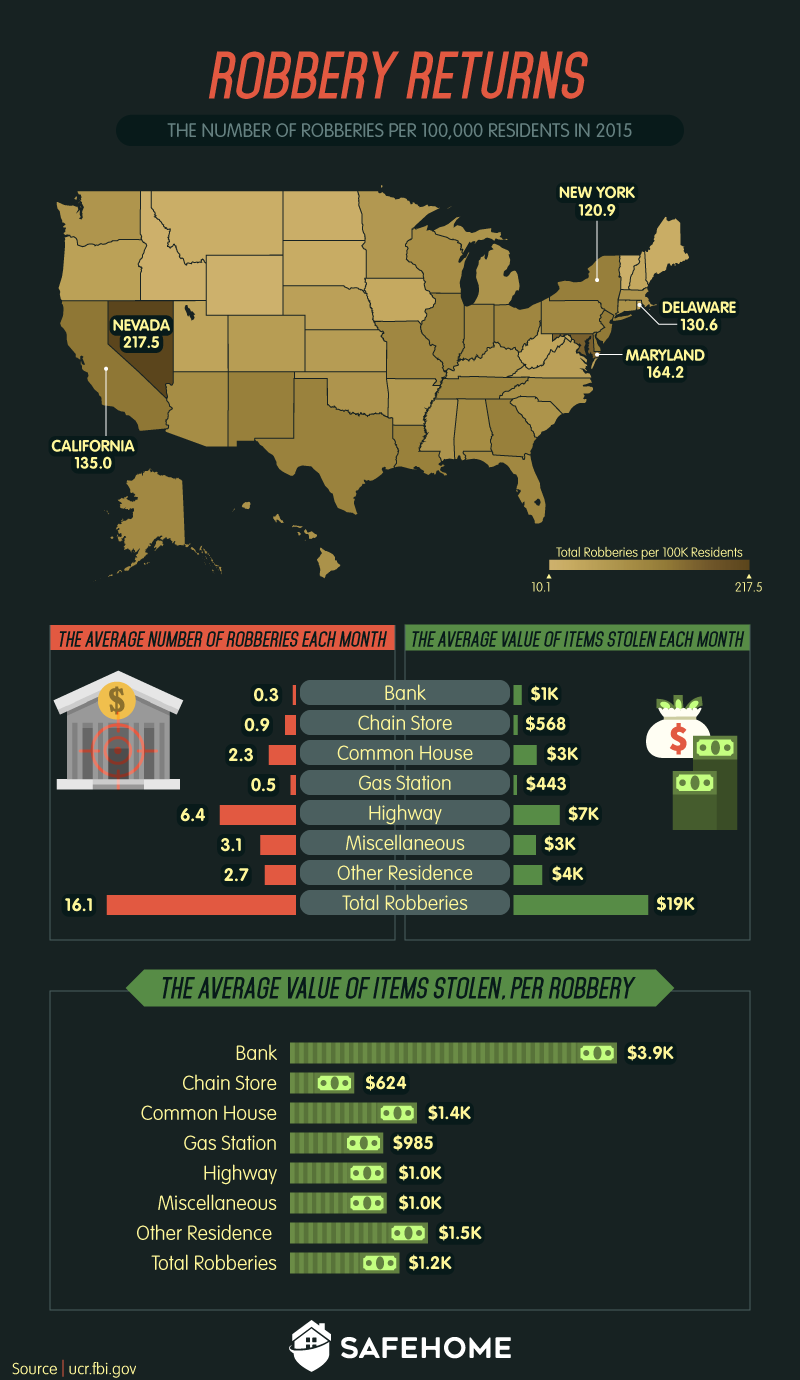 The FBI defines a robbery as “the taking or attempting to take anything of value from the care, custody, or control of a person or persons by force or threat of force or violence and/or by putting the victim in fear.”

In 2015, there were 347 robberies in Nevada for every 100,000 residents. In April, four men were arrested in connection with 16 armed robberies in a two-week span throughout Las Vegas and Henderson. In March, police arrested a woman in connection with two bank robberies that occurred during a two-week period outside of Las Vegas. While most states experienced less than one bank robbery per every 100,000 residents in 2015, accounting for a little more than $1,000 each month, the average bank robbery was valued at more than $3,900 per instance. 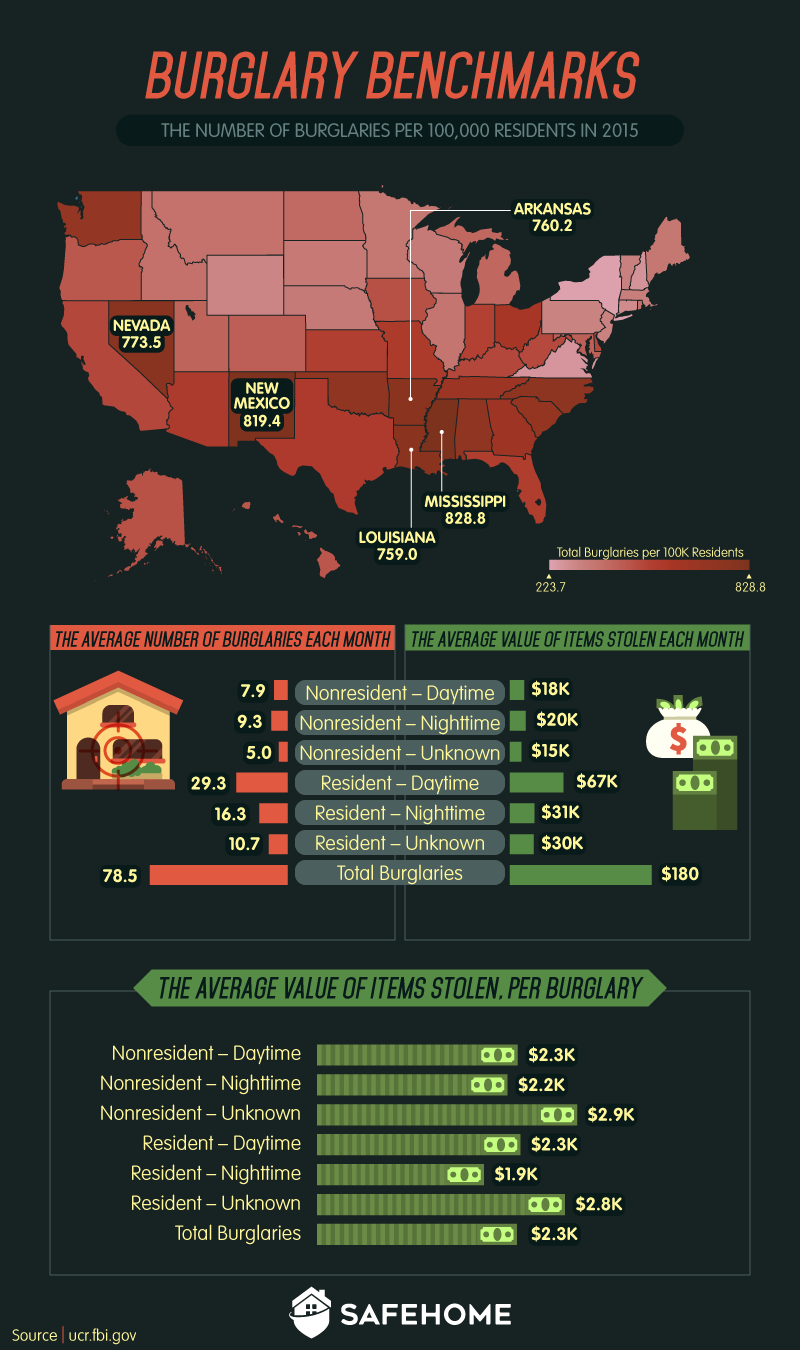 The most costly burglaries occurred at an unknown time of day, according to UCR data, implying whether the assailants broke in during daytime hours or evening hours was indiscernible. For burglaries that targeted both resident and nonresident buildings, those that occurred during daytime hours resulted in a higher loss than those that occurred at night. It does not hurt to follow these steps or invest in some security cameras to deter criminals from choosing your home or business.

In every state, there are burglaries, robberies, and larceny crimes. From jewelry and precious metals to clothing and electronics, there’s no telling exactly what a thief might target from your home or business, and chances are these people did not have a good security system. In some states like Nevada, Maryland, Rhode Island, and Delaware, these crimes were reported at a higher rate, according to the FBI Uniform Crime Reporting data.

When it comes to protecting your family and possessions, don’t take any chances. Break-ins don’t just happen at night, and a home security system can help ensure your home or office is protected, regardless of who’s home.

We pulled the FBI 2015 Uniform Crime Reporting data from the National Archive of Criminal Justice Data and looked at what property was stolen and the value of that property across the United States.

Help keep your readers safe and up-to-date on crime trends by sharing the results of our findings on your site for any noncommercial use. We only ask you ensure a link back to this page so our contributors earn credit for their work.