The Best & Worst States for Climate Change in the U.S.

The warnings are dire: If humanity is unable (or unwilling) to make major progress in curbing global warming by 2030, the effects to life on this planet will be catastrophic — mass species die-offs, dangerously high sea levels and more regular exposure to extreme heat across the globe.

We are seeing real-world impacts of climate change nearly every day. Among the most dramatic recent examples are the devastating brushfires that have torn through Australia. These fires, which have consumed millions of acres and killed at least two dozen people and countless animals, were spurred largely by extreme heat and prolonged drought — Australia surpassed its record high temperature twice in December 2019 alone.

Still, despite near-unanimous scientific agreement that the dramatic increase in global temperatures over the past century is driven by human activity, fighting climate change and global warming remains a divisive political issue. Among all Americans, the threat of climate change is largely sinking in — 57% of Americans today say global warming is a threat to the well-being of Americans, up from 40% in 2013. However, among conservative Republicans, that number is just 19% and among all Republicans, including those who identify as moderate or even liberal, it’s just 43%.

But we’ve already seen the widespread effects of climate change right here in the U.S. — wildfires, stronger hurricanes and more frequent flooding, just to name a few. In such a large and environmentally diverse landmass as the United States, the effects of climate change vary considerably across the country, with some regions of the country likely to experience far worse impacts from global warming than others.

To quantify which states are likely to have it the best (and worst) over the next several decades, we examined data published by Climate Central, a group of scientists and researchers focused on documenting the effects of climate change.

Our research indicated that while every state would be impacted by rising temperatures, there are a handful of unlucky states that by virtue of their geographic placement will be especially threatened by climate change. To see the full methodology used to create our Climate Change Risk Index, jump to the bottom of the page. We have excluded Alaska and Hawaii from the analysis for lack of comparable data.

The impacts of climate change are vast and complex, but there are five major categories of effects — extreme heat, drought, wildfires, coastal flooding and inland flooding. Each of those categories carries a range of impacts of their own. For instance, extreme heat increases the risk of illness or death in humans and animals, but it also impacts agricultural yields and strains the electrical grid.

To calculate our Climate Change Risk Index, we compared data to determine things like how many people are at risk of dangerously high temperatures, wildfires or flooding and how climate change will extend periods like mosquito season or high wildfire risk days. Each state was ranked in each category from best to worst, and those figures were added together to create a total in which higher numbers equate to greater risk from climate change. 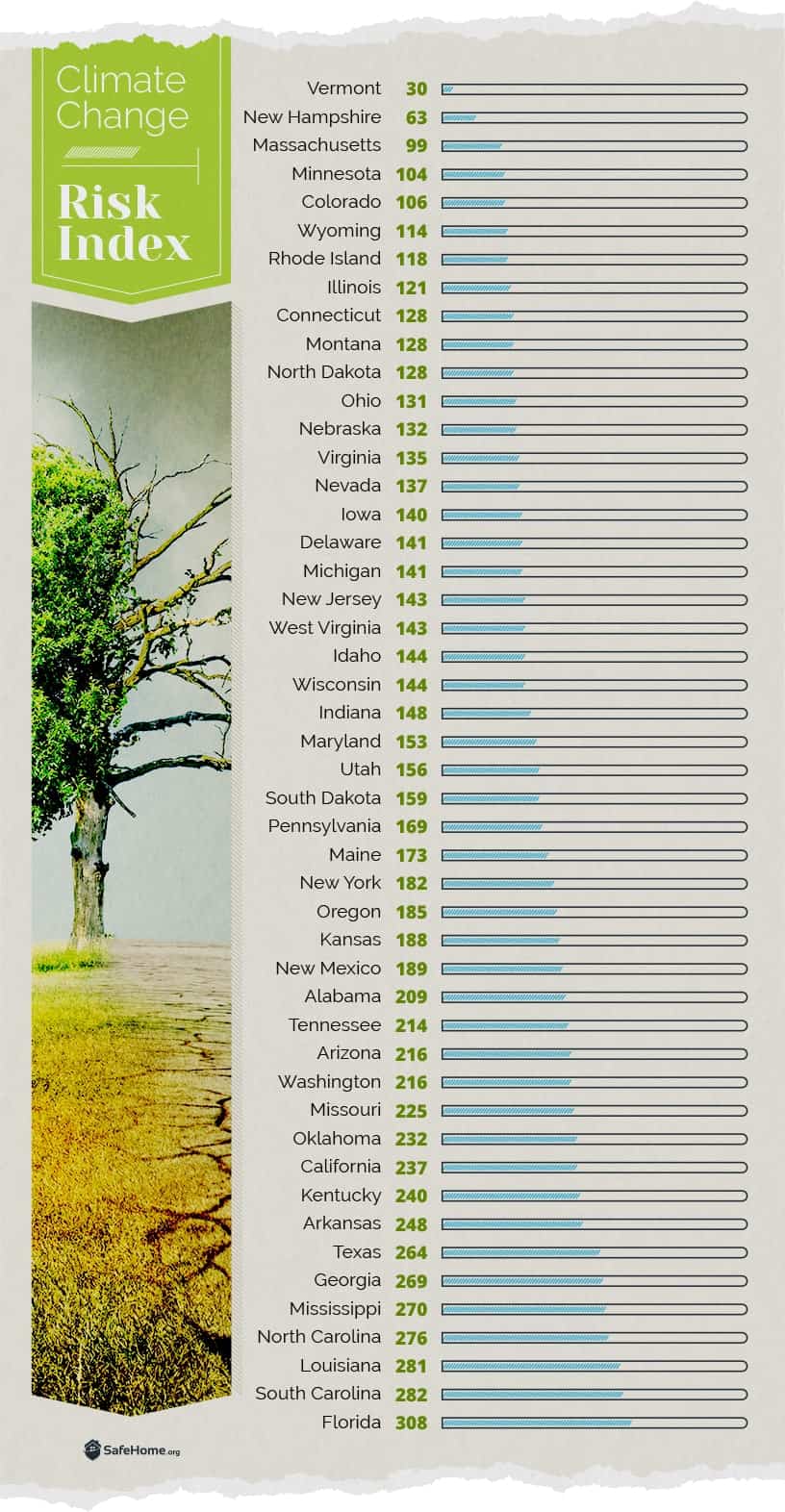 Nine of the 10 states that are likely to experience the worst impacts of climate change are in the South, and most of those are coastal states. California, a West Coast state, takes the No. 10 spot. Only two of the Southern states in the top 10, Arkansas and Kentucky, are landlocked.

On the other end of the spectrum, the Northeast dominates the list of states where climate change impact is likely to be less severe, including No. 1 Vermont, with neighboring New Hampshire in a distant second place. The Northeast is home to the only three states with Climate Change Risk Index scores lower than 100 (Vermont, New Hampshire, and Massachusetts).

Regionally, the highest average score is in the South, where the average state has a Climate Change Risk Index score of 229, far higher than the overall U.S. average of about 174. In fact, no other region has an average score over that, though the West is close. 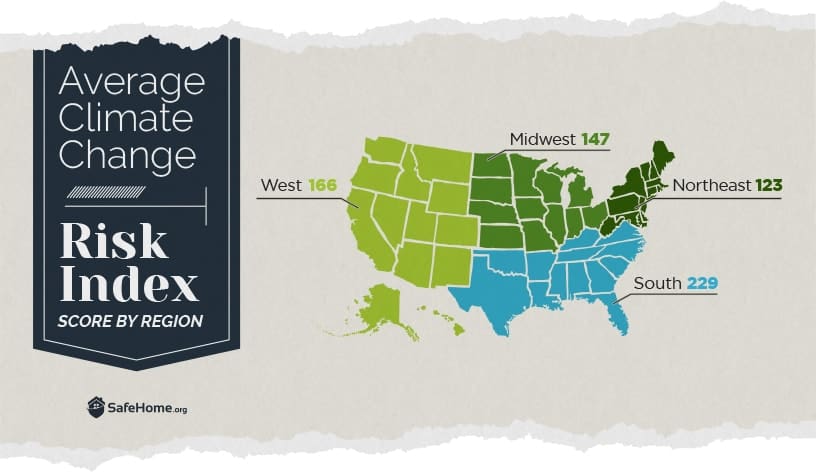 As we mentioned, all 48 states we analyzed are expected to see an increase in extreme heat, which could include an increase in the number of very hot days, an extension of the mosquito season in the state, or a higher number of poor air quality days, among other impacts of extreme heat. Vermont is the only state where extreme heat is the only expected climate change impact, and a few states will be impacted by all five issues — heat, drought, wildfires, coastal flooding, and inland flooding.

California, Florida, Georgia, North Carolina, Oregon, Texas and Washington are expected to experience all five major climate change categories over the next few decades. Not surprisingly, all of those states also have Climate Change Risk Index scores higher than the overall U.S. average. 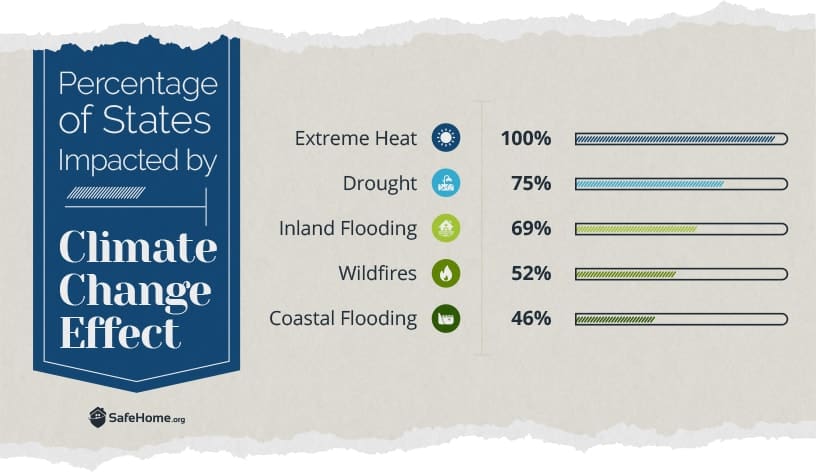 Because extreme heat is the most common climate change impact, affecting all states in the coming years, we included the highest number of factors related to extreme heat in our index. Our analysis in this area included the percentage of people vulnerable to extreme heat, the increase in mosquito season days between the 1980s and today and the projected number of dangerously hot days (days where the heat index is higher than 105 degrees) by 2050. 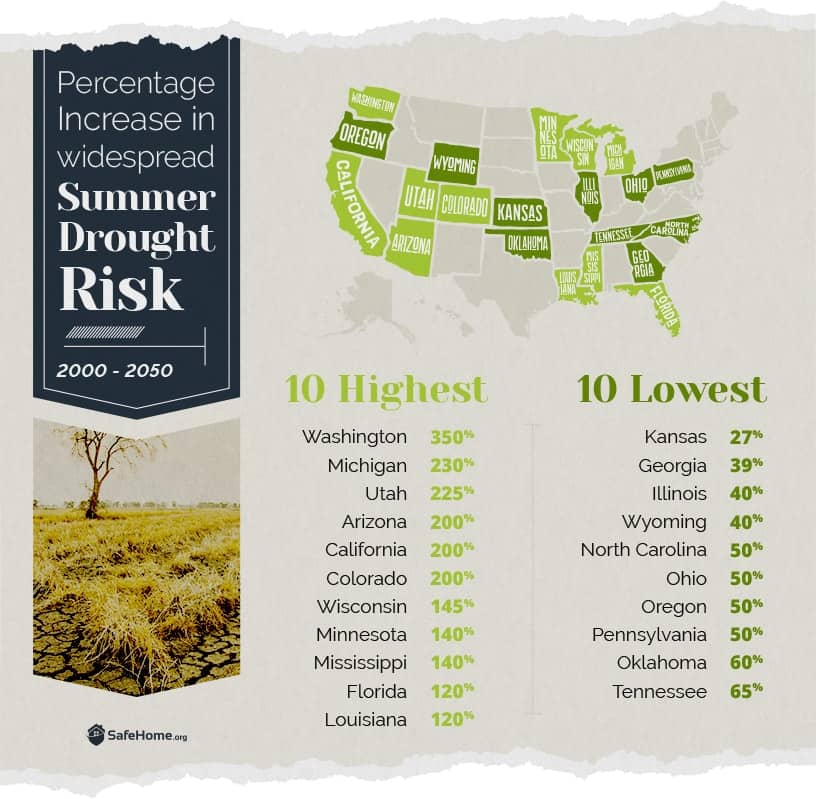 Inland flooding is projected to impact 33 of the 48 states we examined, making it the third most common climate change impact. In this area, we included one factor to rank how much inland flooding is expected to affect the state — the percentage of a state’s population at high risk of inland flooding, meaning those living in the federal government-designated 100-year floodplain. 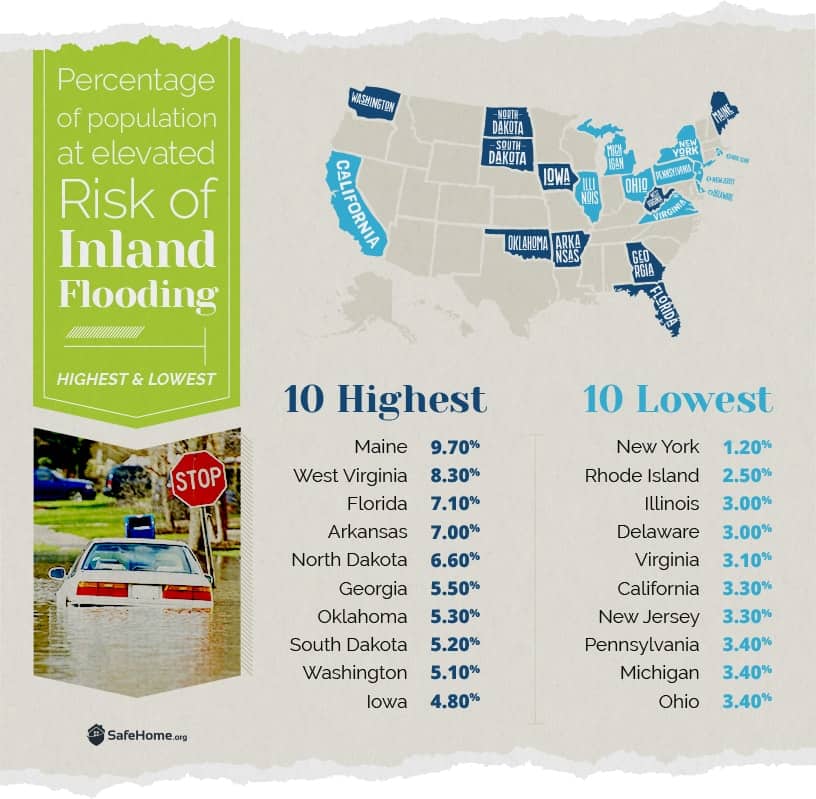 Just over half of the 48 states that were part of our analysis are expected to see impacts of climate change related to wildfires. In this area, we included two factors as part of our ranking — the increase in days with high wildfire potential through 2050 and the percentage of the population who currently live in an area with an elevated wildfire risk. 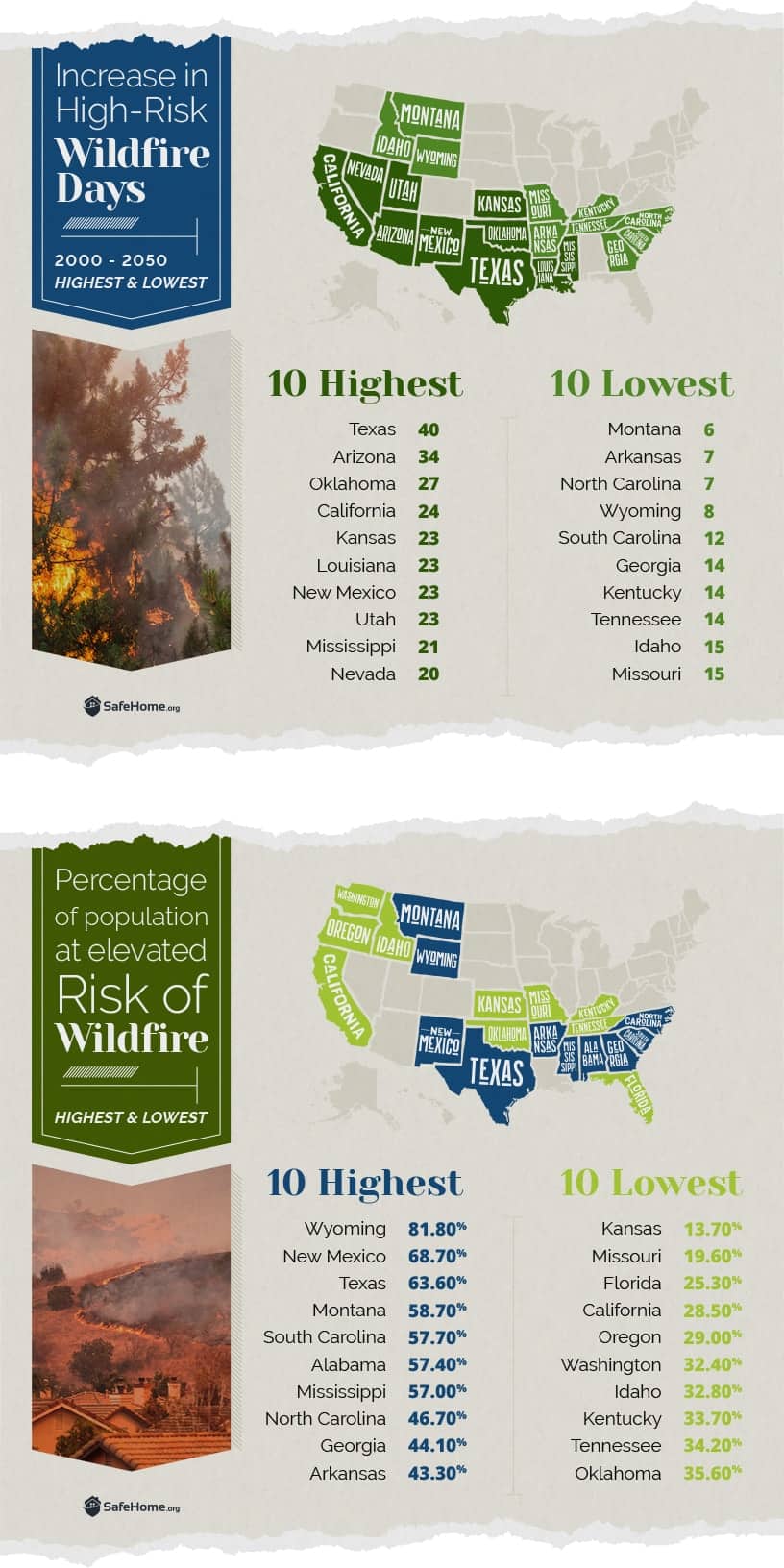 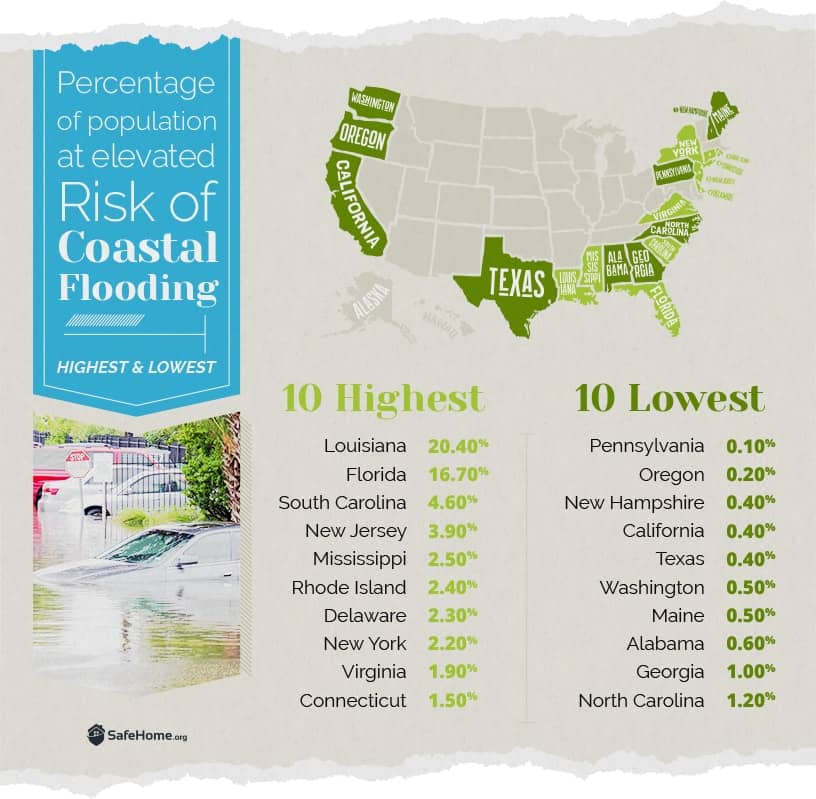 What About Your State?

While pretty much everyone has been experiencing rising temperatures, as we’ve seen, the impacts of climate change on a state-by-state basis are broad and diverse. Take a look at what’s expected to happen in your state:

While the specific impacts of climate change will vary from state to state, the reality is no American will be able to completely escape the real and everyday effects of human-induced climate change.

All of the data used in our analysis came from the excellent work of Climate Central and a site it maintains, States at Risk, which is a clearinghouse of data and analysis related to the impacts of climate change on the states. We excluded Alaska and Hawaii from our analysis because not enough data was available for either one to draw fair comparisons.

The site lists dozens of impacts for states and, often, multiple cities within the states, but the factors we included in our Climate Change Risk Index were:

The data for each state was ranked from best to worst, and each state’s rank in all the categories were added together to create the overall ranking in which lower scores equate to lower risk from climate change.

The information and images on this page are free for noncommercial uses. Please reference this page with a link to the URL at the top if you choose to share it.