When making a decision about where one should live, several factors come into play for everyone: housing costs, availability of medical services, access to entertainment, and more. But for the LGBTQ+ community, other questions are top-of-mind. Will I be welcome here? Will I be safe?

To help these individuals make an informed decision about the best places to live, our research team compiled state-by-state rankings from over a dozen sources (including the FBI, UCLA School of Law, the U.S. Census, and more). Through this research we’ve created comprehensive safety rankings that highlight some of the best and worst states to live from the perspective of LGBTQ+ safety.

What is the LGBTQ+ State Safety Ranking?

We gathered publicly available data on the following aspects of LGBTQ+ community safety and protection in all states: population, crime, work, marriage & family, and children. We then ranked these states on efforts they’ve taken to support LGBTQ+ rights both through public initiatives and private endeavors. (For our full methodology, please scroll to the end of this article.)

According to the FBI,16.7% of hate crimes across the nation target the LGBTQ+ community. A history of civil rights legal achievements such as Title VII of the 1964 Civil Rights Act or The Federal Fair Housing Act has established a baseline off which states can springboard with more specific LGBTQ+ protections. As the LGBTQ+ voice grows stronger, federal and state laws have begun to evolve in an attempt to keep pace. While some states are moving quickly in expanding protections for LGBTQ+ rights, other states have progressed more slowly. 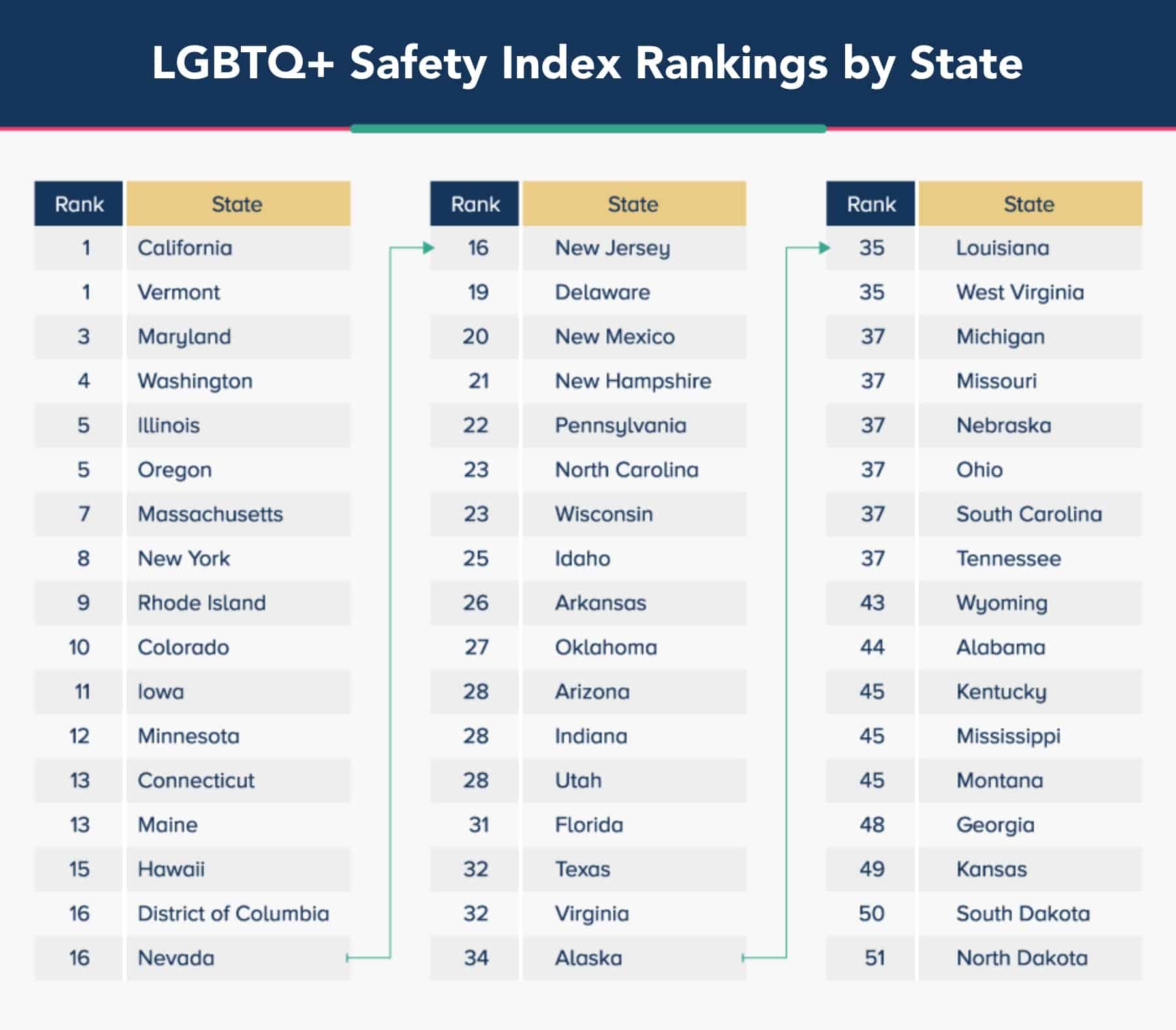 The Top States for LGBTQ+ Safety

California and Vermont scored the highest for LGBTQ+ safety and equality. Both states have taken numerous legislative measures to support LGBTQ+ residents in recent years.

According to the Corporate Equality Index (CEI), which rates workplaces on LGBTQ+ equality, California is home to 154 top-scoring employers, averaging 92.5 out of 100 on the CEI.

Nationally, for every 100,000 LGBTQ+ residents, there are 10 hate crimes directed toward LGBTQ+ individuals. In California, that number increases to 12.8.

Like California, Vermont scores very high on the Corporate Equality Index, a national rating system for LGBTQ+ equality amongst participating companies and Fortune 500 companies, earning a perfect 100 rating. Vermont also scores highly in this category due to state laws that protect LGBTQ+ workers in public and private state enterprises.

Vermont has a robust regulatory matrix in place for LGBTQ+ safety and protection in healthcare. It also features a substantial number of LGBTQ+ allied professionals and has a trans youth clinic presence. Vermont state law bans transgender exclusions in health insurance and discrimination against patients based on sexual orientation or gender identity.

Like California, Vermont does not perform as well regarding hate crimes targeted against the LGBTQ+ community. Per every 100,000 LGBTQ+ residents, 30.8 hate crimes occur in Vermont against LGBTQ+ members of the community.

Maryland legislators have enacted laws that prohibit bullying, cyberbullying, and discrimination in public and private schools, including negative actions based on gender identity or sexual orientation.

Maryland’s healthcare protections have helped protect LGBTQ+ patients from discrimination. However, Maryland does not currently have a law that explicitly bans transgender exclusions in health insurance.

Washington has a higher portion of the general population that’s LGBTQ+ compared to the rest of the country, and supports it by implementing public accommodations protections based on sexual orientation and gender identity.

Washington scores highly on the index in protecting children due to their multiple laws prohibiting bullying and cyberbullying in public schools while specifically targeting children based on gender identity and sexual orientation.

While state law does protect same-sex marriage, it does not offer any other type of relationship recognition for same-sex couples.

Both Illinois and Oregon made the top five on the LGBTQ+ safety index due to their public accommodation laws for LGBTQ+ residents, anti-bullying regulations, and high scores on the Corporate Equality Index.

For every 100,000 LGBTQ+-identifying people, 4.2 experience hate crimes in Illinois. This number is significantly below the national average of 10 per 100,000 LGBTQ+ residents.

The Corporate Equality Index, which rates workplaces on LGBTQ+ equality, has awarded Illinois a 90 out of 100 on their index, well above the national average. Additionally, Illinois has laws on the books that prohibit discrimination based on gender identity, gender expression, or sexual orientation for government and private sector employees.

Illinois has many mechanisms to support positive healthcare for the LGBTQ+ community, such as banning transgender exclusions in health insurance and similar laws. However, this state does have a lower than the average number of allied health providers, according to the GLMA.

Oregon scores 88 out of 100 on the corporate equality index. Oregon law also has protections against discrimination in both the public and private workplace based on gender identity, gender expression, or sexual orientation.

Oregon has the highest percentage (6%) of LGBTQ+ residents of any state. (If considered a state, the District of Columbia would beat Oregon with their 10%.) As such, Oregon protects its residents with laws that provide public accommodations support for the LGBTQ+ community.

The Corporate Equality Index gives Massachusetts companies high marks: 96 out of 100 for the state overall, well above the nationwide average of 87. The state hosts 49 employers alone that score 100 on the CEI.

The Worst States for LGBTQ+ Safety

Mississippi, Kentucky, and Montana tied for the fifth-lowest state in providing LGBTQ+ safety. None of these states have laws in place that ban transgender exclusions from health insurance or fight discrimination based on sexual orientation or gender identity. None of these states have trans youth clinics. In terms of adoption, neither Mississippi, Kentucky, nor Montana law explicitly states any allowance for same-sex couple second-parent adoption.

Georgia has no measured protections in place through state law for public accommodations, anti-discrimination in healthcare, or employment protection from discrimination. LGBTQ+ residents living in Georgia must take extra care in understanding employers’ stances on LGBTQ+ employees’ rights and ensure they carry health insurance that voluntarily and explicitly supports LGBTQ+ protections.

Although Kansas law prohibits bullying and cyberbullying, no language specifically references bullying or discrimination based on gender or sexual orientation. Kansas law also fails to protect LGBTQ+ employees in private and public workplaces. No laws prohibit the denial of coverage for transgender individuals by health insurance providers.

South Dakota produced low scores in nearly every category, failing to implement significant protection against discrimination of LGBTQ+ individuals in school settings, employment, healthcare, and public accommodations. South Dakota witnesses 15 LGBTQ+ directed hate crimes per every 100,000 members of the LGBTQ+ community, which is 1.5 times higher than the national average.

North Dakota is the number one worst state for LGBTQ+ safety according to our ranking. This state does not provide public accommodation protections based on gender identity or sexual orientation. North Dakota experiences a higher than average rate of hate crimes against the LGBTQ+ population (14.6 for every 100,000 LGBTQ+ individuals).

There are no high-ranking companies on the corporate equality index in North Dakota. Nor are there any legal protections in place in the public or private employment sector that safeguard LGBTQ+ anti-discrimination rights. North Dakota law prohibits bullying and cyberbullying in schools but contains no language specifically to protect LGBTQ+ youth. North Dakota adoption law does not explicitly allow same-sex couples the right to second-parent adoption.

States with higher concentrations of LGBTQ+ residents performed better in our rankings with the exception of Georgia (#48). However, in terms of hate crimes against the LGBTQ+ community, these high-performing states collectively averaged 19.9 hate crimes per 100,000 LGBTQ+ residents, far above the national average of 10 per 100,000.

The disparity underscores the room for improvement all states have in providing a safe living environment for LGBTQ+ residents regardless of performance in our rankings. States like California, Vermont, Maryland, Washington, Illinois, Oregon, and Massachusetts are leading the way in safeguarding LGBTQ+ rights, while other states such as Kentucky, Mississippi, Montana, Georgia, Kansas, South Dakota, and North Dakota have much more work to do to close the gap.

We researched public accommodations made for the LGBTQ+ population by state.

Since crime is a crucial safety indicator, we included levels of LGBTQ+ hate crimes state-by-state in our rankings.

We evaluated each state in terms of its ability to protect children in public and private schools from bullying, cyberbullying, and discrimination.

From these sources, we could answer specific yes/no questions in each critical area that would indicate a particular state’s ability to create a safe environment for the LGBTQ+ community. Questions included (but aren’t limited to) the following:

States were rated 1 or -1 depending on whether their actions were helpful or harmful to the LGBTQ+ community. State scores were totaled and then indexed, resulting in a possible score range between 100 and -100 per state — 100 being the best and -100 being the worst.

To conduct this research and create this index, we relied on data from the following sources: