Over 43 million Americans have been doxxed, resulting in lost friends, jobs, and identities

At a time when ransomware, viruses, and phishing frauds frighten computer users and capture ominous headlines, another emerging cyber threat hits even closer to home.

The term is tech-speak for “dropping documents”, and refers to targeting individuals by maliciously publishing their personal information. Motivated by politics, personal grudges, or profit, doxxing is often accompanied by damaging allegations calculated to generate public humiliation and condemnation.

Doxxing with publicly available information is generally legal, and many consider it vigilante justice that unmasks bullies and identifies outlaws…but detractors warn of a mob mentality that ruins reputations and inflicts irreparable harm without due process. This research highlights the reach and impact of this modern phenomenon.

Originating in the 1990s within hacker communities, doxxing spread to the mainstream via the social media explosion. The 2015 exposure of a Minnesota game-hunting dentist was among the first headline cases, but its momentum has steadily grown through the current online pursuit of 2021 Capitol trespassers. 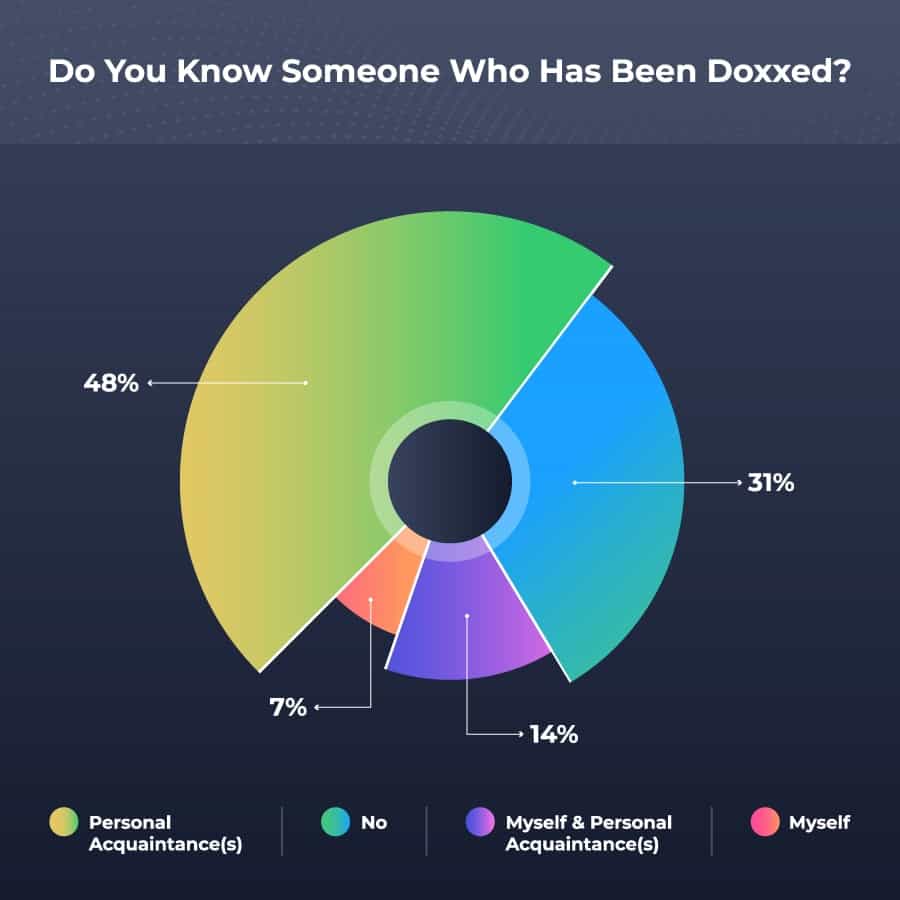 More than two-thirds of Americans had either been doxxed themselves (21%) or personally knew someone who had (62%).

The personal nature of these attacks seems intimate – and that is sometimes the case — but more often doxxers are virtual strangers avenging petty or philosophical disputes. 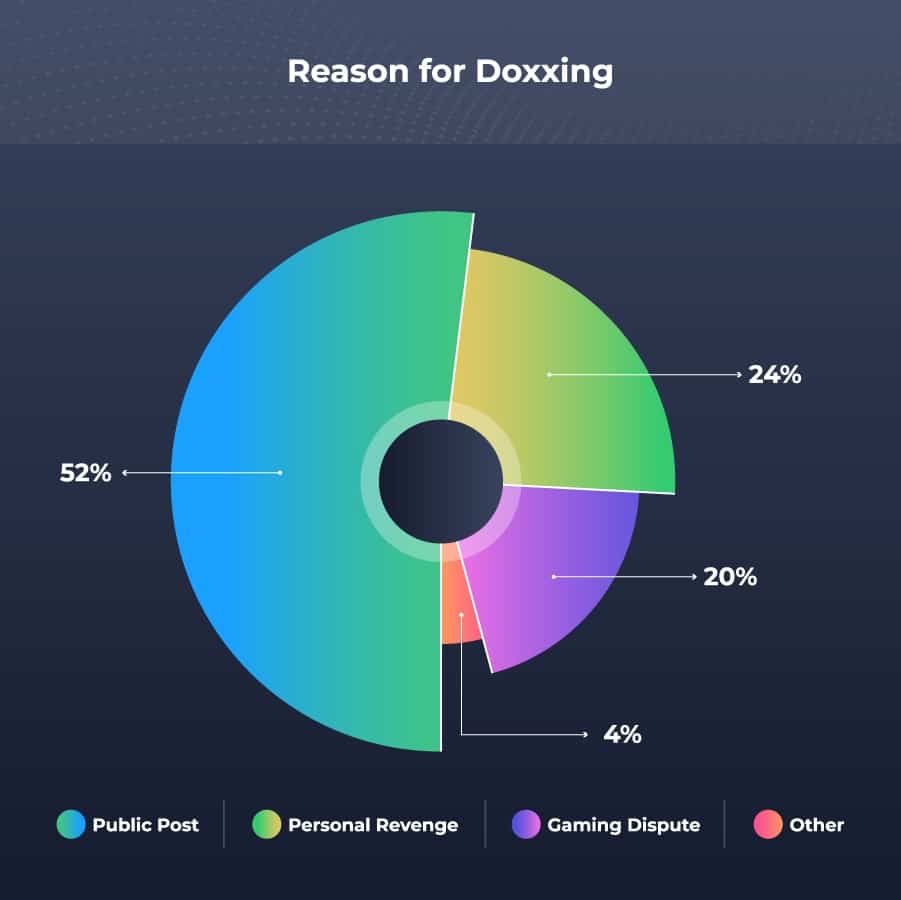 Most doxxing incidents are sparked by online posts (52%), with agitated doxxers shining light on offensive opinions or simply aiming to harm someone with whom they disagree. Another 20% of cases stem from online gaming conflicts, where heated exchanges overflow to real-world damage (including a dangerous practice known as “swatting”). 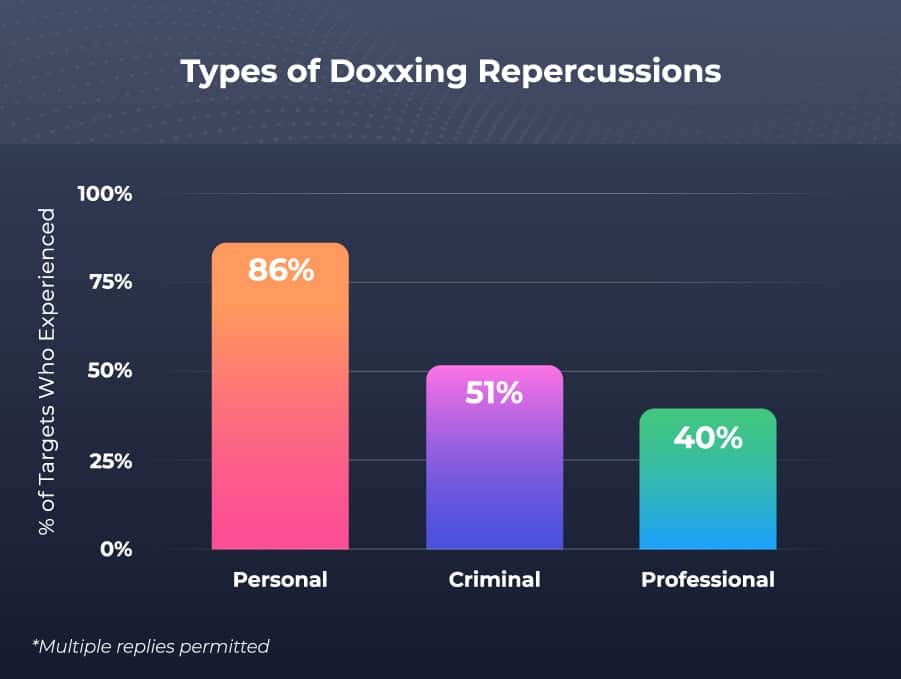 That leaves almost a quarter of doxxers who are friends, family members, or former romantic partners releasing private information as personal payback.

Extreme consequences like swatting are relatively rare, but doxxing regularly brings a host of other repercussions.

Publishing a name may not seem overtly threatening, but when attached to unsavory allegations and accompanied by additional info, the potential for dark results grows greater. 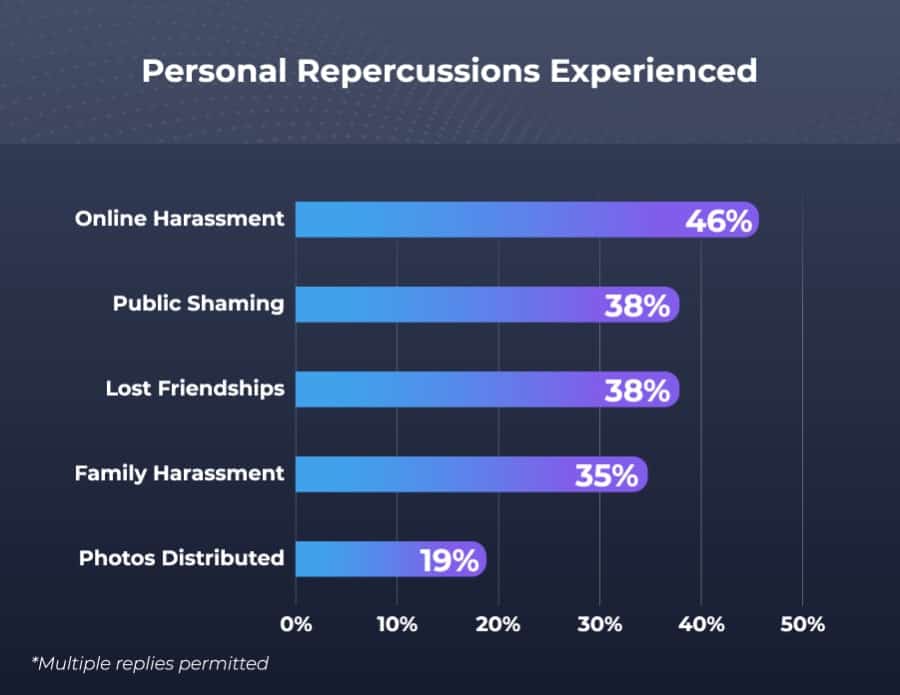 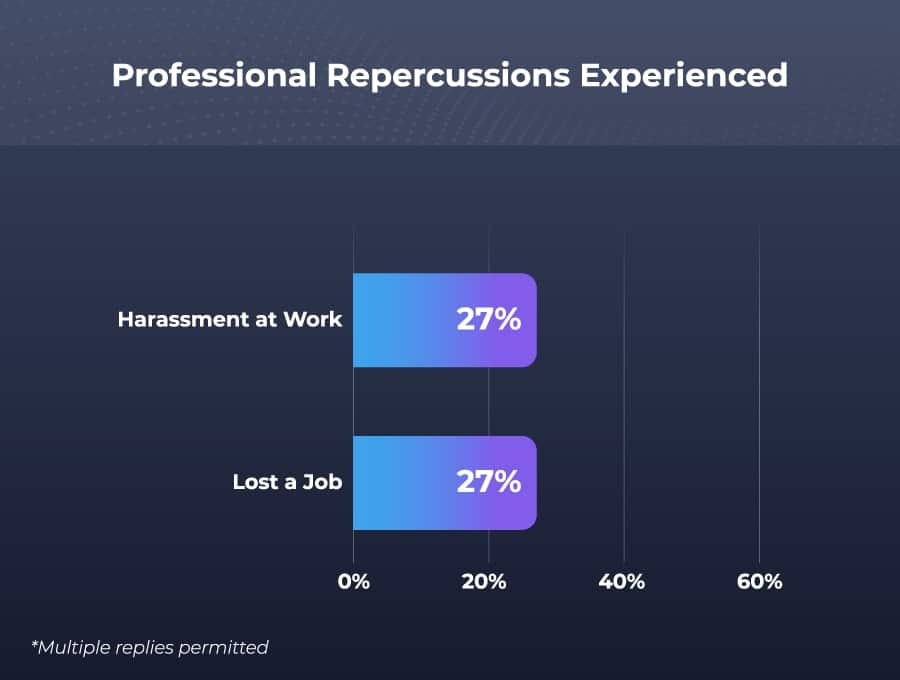 Doxxing repercussions also frequently affected professional lives, with 27% reporting harassment at work, and an equal portion fired from a job after being doxxed. 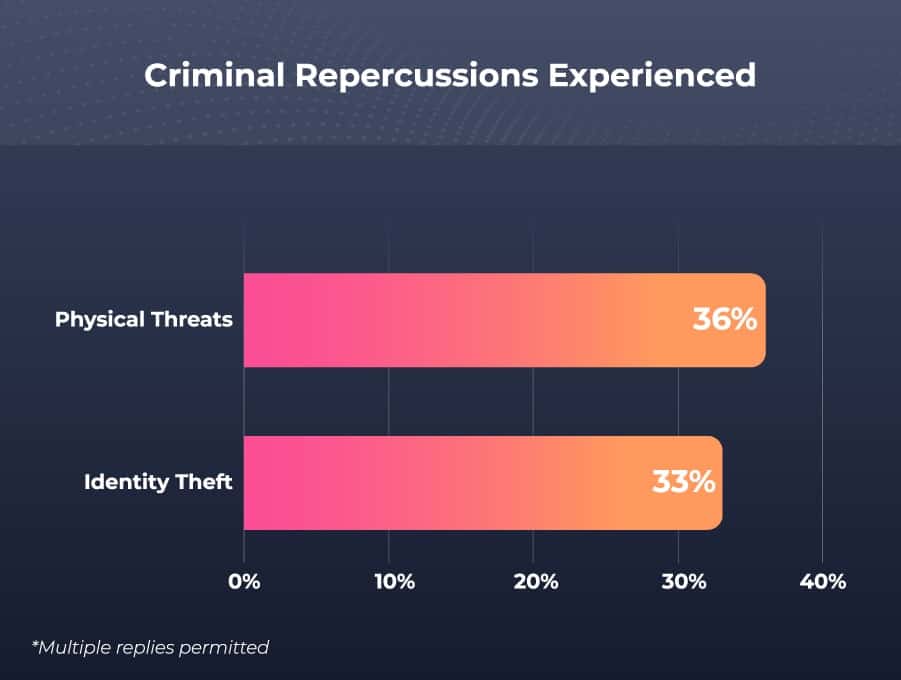 Our research further revealed that doxxing damages go beyond emotions and reputations: 51% experienced criminal repercussions, including threats of violence and identity theft. 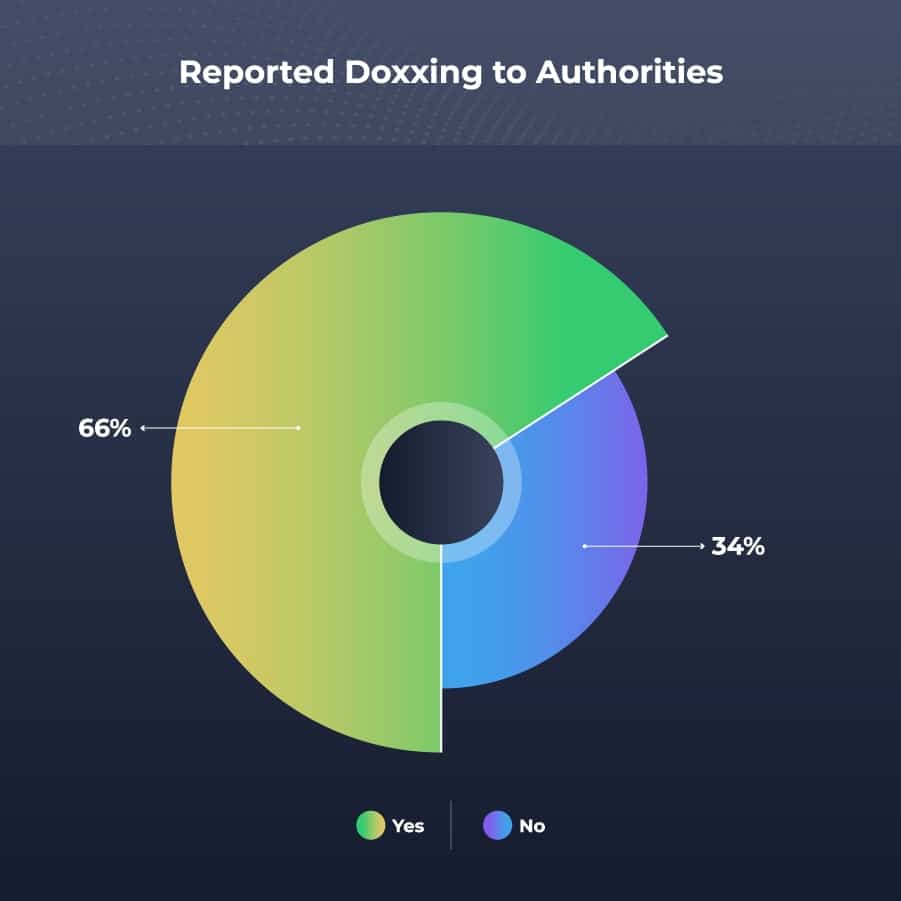 Those who defend doxxing argue that consequences are attributable to targets’ personal behavior rather than the exposure, but this justification rings hollow when identification/accusations prove inaccurate, families become collateral damage, or criminal acts ensue. 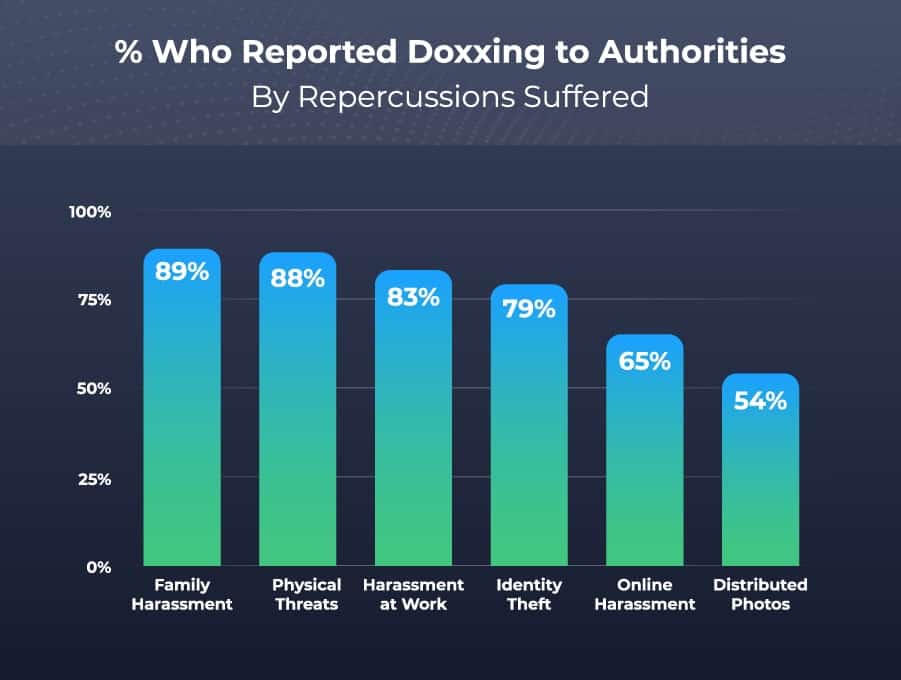 Overall, only 2/3 of targeted parties sought to hold doxxers accountable by reporting incidents to authorities. This number fluctuated depending upon the severity and victim of the consequences.

Reporting rates were high when physical threats or identity thefts resulted, and where harassment involved family members or the workplace, but dropped off significantly when online harassment was limited to the target or personal photos were distributed.

Those who don’t report incidents tend to keep quiet and change their contact info, hoping the incident simply fades.

Social media is a double-edged sword that can bring people together or tear them apart; tools for finding friends and swapping recipes are sometimes repurposed to shame strangers and exes.

By maliciously publishing personal details and encouraging public reprisals, doxxers use Internet accessibility to recklessly ruin digital lives in the name of righteousness or revenge. Doxxing is also on the rise and largely legal…so protection is left to individuals. Here’s what you can do to protect your data:

Almost ¼ of Americans have already been doxxed and suffered personal/professional/ financial/physical repercussions. Don’t become the next target: guard your data, watch your step, and think twice about whether that next Tweet or gaming insult is worth it.