How to Set Up a VPN on Xbox

For gamers, VPNs are becoming more popular to increase security and bypass geo-blocking technology. Here’s how to set one up on your Xbox.

VPNs are booming in popularity and for good reason. A lot of folks are figuring out just how vulnerable they are online and taking the steps to increase their digital privacy in the face of mounting threats.

But when we talk about virtual private networks (VPNs), we’re usually discussing the benefits of using them on desktop computers and mobile devices. It’s not often that gaming consoles like Xbox are included in the conversation.

But they really should be.

Why Do I Need a VPN on My Xbox?

We all want to stay safe online — gamers included. Although video game consoles aren’t usually thought of as attack vectors for cybercriminals, you can never be too careful. Protecting your banking information and keeping personally identifying information private while gaming can be difficult with traditional connections. 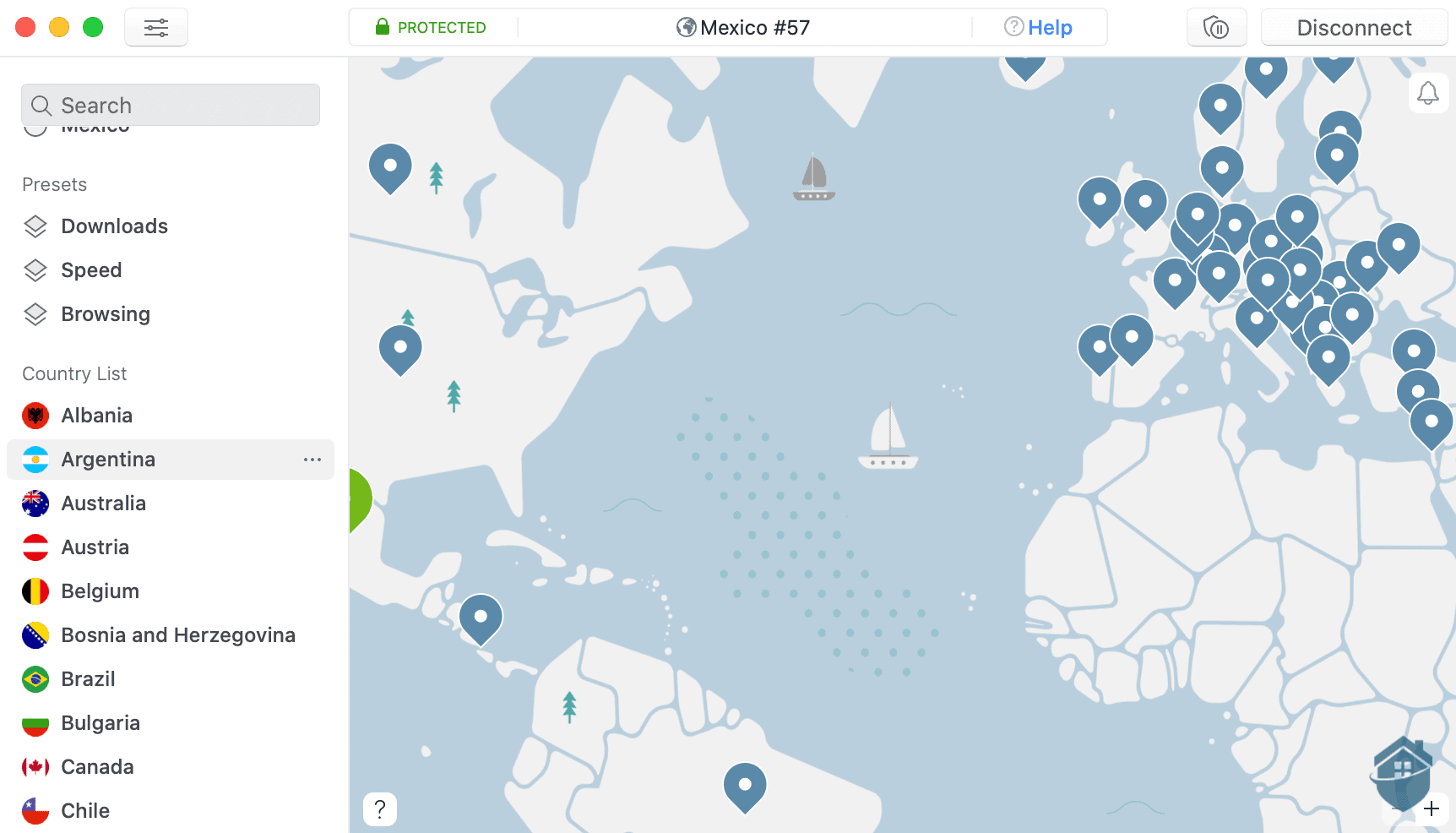 Another added benefit of coupling a VPN with your Xbox is that you’ll be able to bypass geo-restricted content and hop from global server to global server with ease. You’ll also have access to new releases sooner; in some cases, using a VPN can actually improve your performance. That said, keeping your physical location hidden is extremely important when you’re gaming, too.

VPNs work by masking your IP address, meaning that no one knows exactly where you’re connecting from. This can help prevent one of the worst outcomes of online gaming: swatting. This is when a gamer who feels slighted in some way tracks down their opponent’s real-world address and calls the police on them, claiming that they have guns and are threatening to use them. This will usually prompt the law enforcement agency to respond with force, and the consequences are never good.

FYI: Swatting happens more frequently than you might think, and it can be deadly serious. In a handful of cases, the consequences have turned fatal.

The bottom line is you need to be using a virtual private network. Since you’re here, I know you’re anxious to get to the setup instructions. But the first step in the process is selecting the right VPN.

Which VPN Should I Choose?

The best place to start would be at our best VPNs for gaming guide, but we can go through the Cliffs Notes version here.

First, you need to select a VPN with a large, sophisticated server network so your connection speeds won’t suffer. Performance is everything when you’re playing Xbox, and lag can be a killer.

Next, look for a VPN that won’t throttle your bandwidth. This isn’t a problem with most top-tier services, but lower-end VPNs or free versions of services might limit your throughput. If you’re serious about gaming, look for a VPN that provides unlimited data consumption.

Pro Tip: If you’re still a little unsure about what virtual private networks are and what they do, check out our VPN educational resource. You’ll find everything you need to get in the know.

You’re also going to need a functioning kill switch, which terminates your internet connection should your VPN service become interrupted. Note that the top VPNs will offer this feature automatically.

And finally, you’ll want a VPN that adheres to strict security protocols and privacy policies. After all, a VPN is pointless if your provider is leaking DNS requests or logging everything you do. Your best option in this regard is to select a VPN that has been audited recently by a third-party security firm. 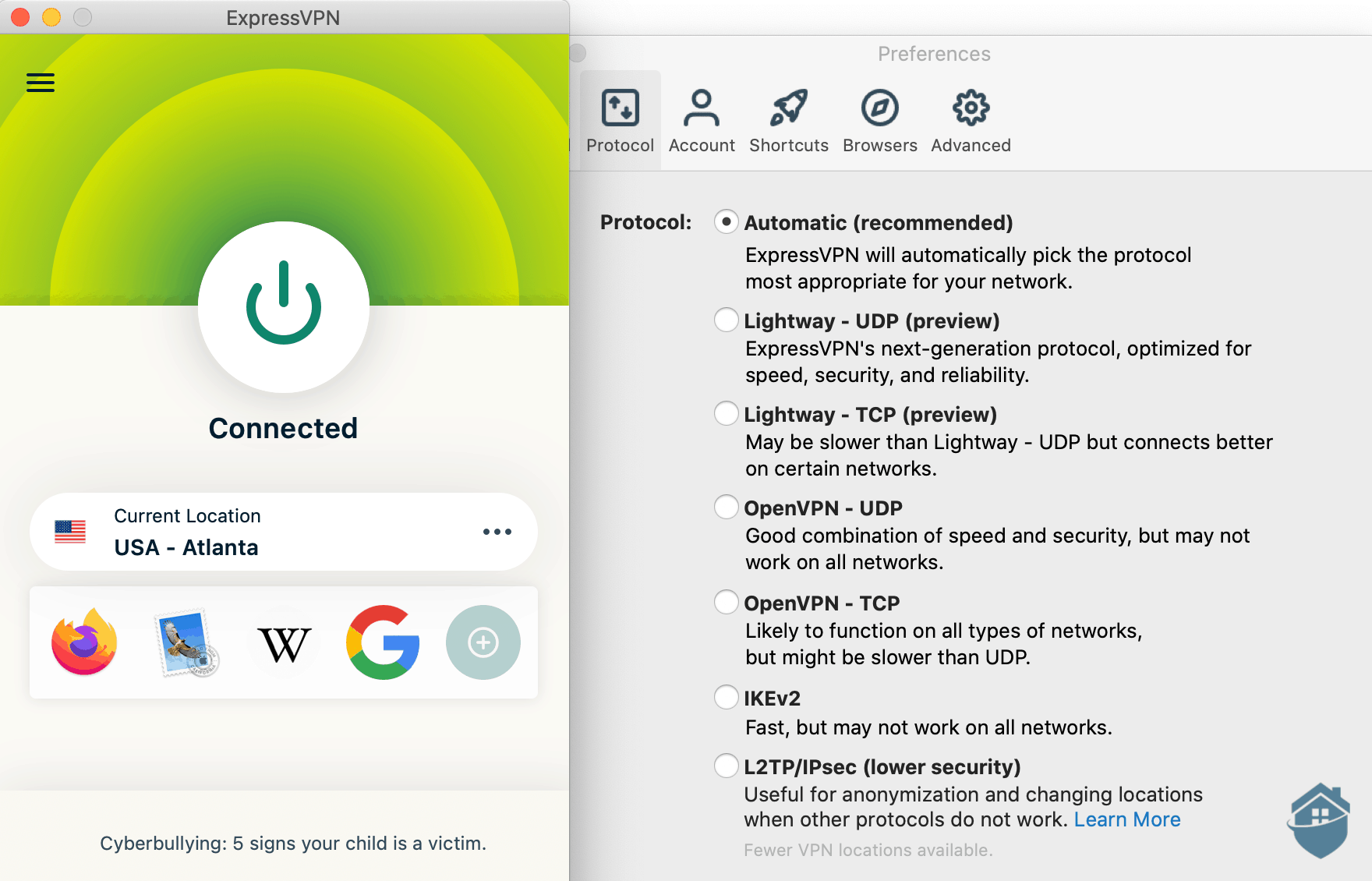 If you want to do a little less legwork, you can always head over to our ExpressVPN vs NordVPN comparison page. These are our two favorite services for Xbox users, and you can check out how they stand up against each other in head-to-head competition.

At this point, you should have a pretty good idea of the VPN you’re looking for. Once you’ve purchased a subscription, it’s time to get it all set up on your Xbox.

Setting Up a VPN on Your Xbox

There are two main ways to set up an Xbox VPN — through your router or through your computer. Both are relatively easy, but achieving the former depends heavily on which VPN you’re using and what router you have. If that’s the route you want to go, check out our guide on how to set up a VPN on your router. Or, you can check the resources available from your service provider and router manufacturer.

The other way is by using a computer as a go-between. This will differ if you’re using a Mac or a PC, so let’s talk about the latter first.

To pass your Xbox connection through your PC’s VPN connection, you’ll first need to plug an Ethernet cable into your Xbox and then connect that cable to your PC. (As an aside, if you’re a PC user, you might be interested in our list of the best VPNs for Windows computers.)

Once that’s done, go to your computer’s control panel, and open the Network and Sharing Center. Select “Change Adapter Settings,” find your VPN, and right-click on it to open up the properties window. Once there, click on the “Sharing” tab and check “Allow other network users to connect through this computer’s internet connection.” Then, click on the “Select a private network connection” box and pick your Xbox’s Ethernet connection.

Next, on your Xbox, go to the settings area of the home screen. Select the “Network” tab, and go to “Network Settings.” Once you’re there, hit “Test Network Connection.” Once the console connects to the internet, you should be golden.

The process is similar on a Mac. Connect your computer to the Xbox using an Ethernet cable, and on the Mac, open your “System Preferences.” There, you’ll click on “Sharing.” Select “Internet Sharing.” From there, select “Wi-Fi” on the “Share Your Connection” menu that pops up. Select the Ethernet connection to the Xbox from the list of devices that will be allowed to use the network. Check the box next to “Internet Sharing.”

If everything is correct, a green symbol will appear. Follow the same steps above on your Xbox, turn your VPN on, and it’s off to the races. But before you start gaming, you might want to read our resource for the best Mac VPNs to make sure you’re getting the most bang for your buck. 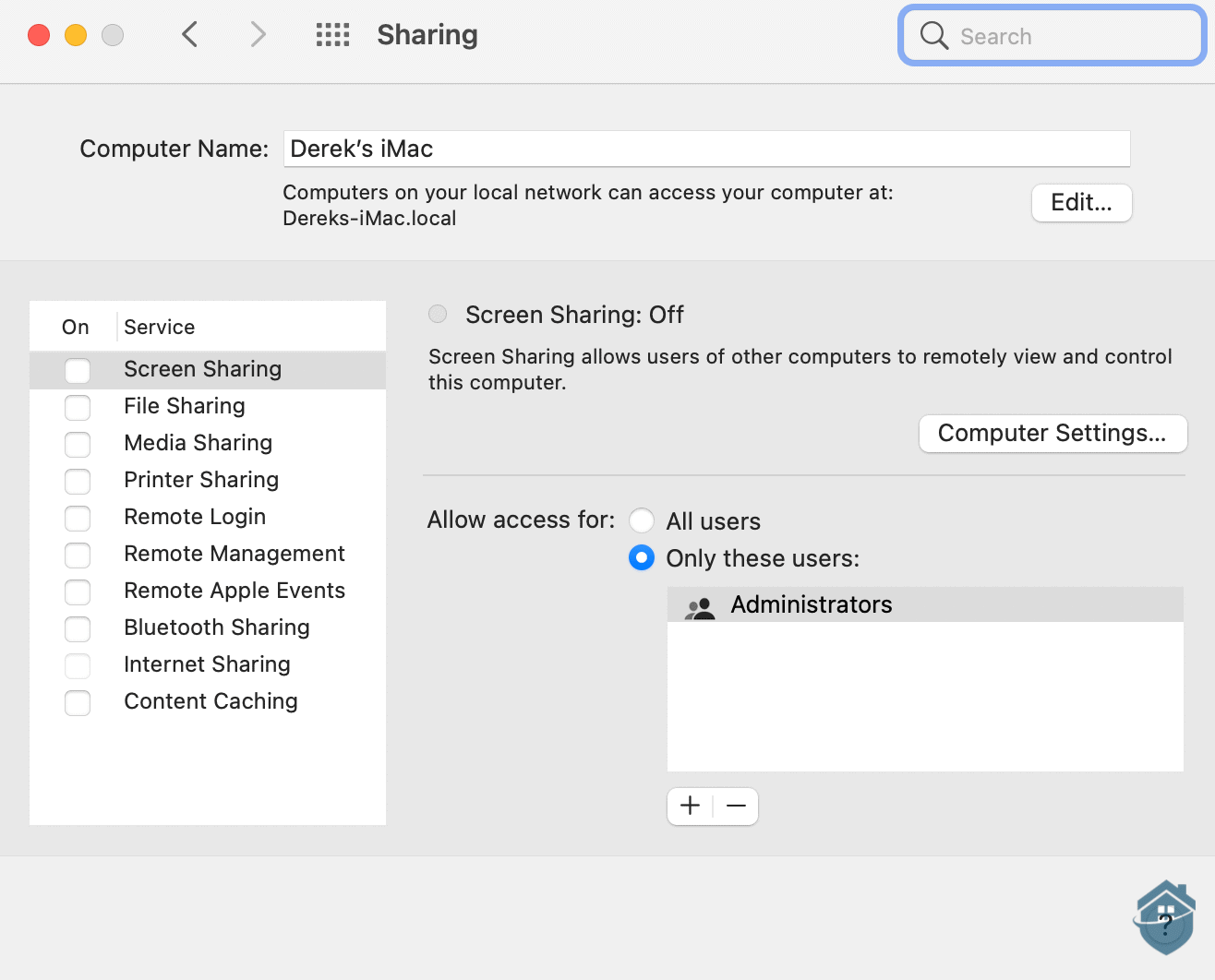 Here’s where you start the process on your Mac

And that’s that. You should be ready to game with the protection of a virtual private network in place. A few quick thoughts on potential drawbacks, though.

Once you’ve set up the VPN, one thing you’re likely going to find is that your connections aren’t as speedy as they used to be. This is perfectly normal and to be expected. Just how much of a slowdown you’re going to experience, though, depends entirely on the VPN you select.

Most modern VPNs worth their salt have accounted for connectivity issues with state-of-the-art server networks. This alone is worth selecting a top-tier service. Not only will you gain the benefits of world-class protection and encryption, but the slowdowns you experience will be negligible.

Pro Tip: Want to read about the fastest VPN we’ve ever tested? Head over to our review of NordVPN. Not only do they offer blazing-fast speeds, they’ve got some pretty advanced features to boot.

If you’re using a higher-end service as I recommend, and you’re still running into connectivity issues, make sure you’re using the right protocol. IKEv2 is probably your best bet, but you might toggle between what your provider makes available to dial in your performance. 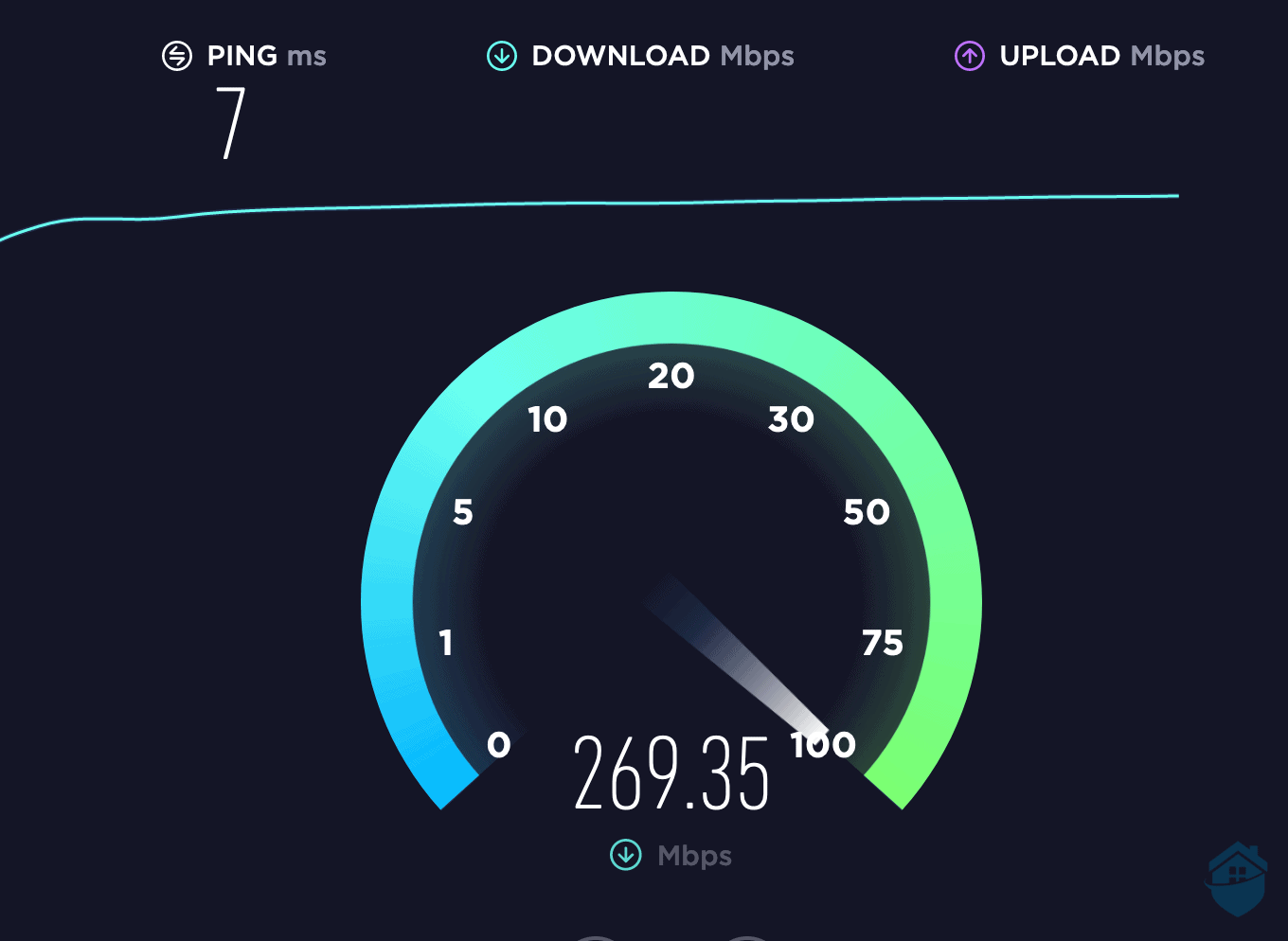 A decent VPN won’t slow down your performance significantly.

Also be sure you’re connecting to a VPN server that’s in close, physical proximity to you. As a rule of thumb, the further away your exit node is, the more disruptions you’ll experience. You’ll also want to make sure any added security layers are disabled, like multi-hop, traffic obfuscation, or any other geographic-based protection. Unless you really need these features, they’re going to slow you down.

And finally, one thing I’ve learned from countless hours spent working with VPNs – don’t trust the “quick connect” setting. A lot of services have a “one-click” option that, in theory, will connect you to the fastest network available. Sometimes these functions work well, but I’ve had plenty of experiences where the so-called quick connection was brutally slow.

While it might seem a little daunting on the front end, setting up a VPN on your Xbox connection is actually a lot easier than you think. If you follow these steps, you’ll dramatically increase your digital privacy and physical security while gaming.

If you’re still looking for the right VPN to select, head over to our guide on the top 10 VPNs of 2023. Remember — it’s dangerous to go alone. You should take a VPN.

Do I need a VPN on my Xbox?

While it’s not absolutely necessary, a VPN will help protect your sensitive information, protect your physical location from being exposed, and give you access to geo-restricted content.

Is it hard to install a VPN on an Xbox?

It can be a little complicated if you don’t know what you’re doing. We suggest reading our hands-on walkthrough of how to install a VPN on your Xbox.

Will a VPN slow down my Xbox?

You’ll notice performance issues with some VPNs, but most modern virtual private networks account for latency so well that any slowdowns would hardly be noticeable.

How much are VPNs?

Most VPNs are subscription-based. The cost depends heavily on the features that come with your VPN and the duration of your membership, but expect to pay between $3 and $15 per month.

What’s the best VPN for Xbox?

For use on an Xbox, we recommend ExpressVPN, NordVPN, or Surfshark.