From their free plan to their sub-$5 monthly plan, let’s see how this VPN stacks up when it comes to pricing and options.

VPNs used to be a cool way to unblock Netflix while you were traveling. Today, they’re a basic online utility. Because, while the open web can be a pretty great place to hang out, it’s also polluted with ugly security threats that many of us are unequipped to deal with or even spot.

Privacy-enhancing VPNs work like invisible security systems for our devices. They keep our day-to-day internet activity off the bad guys’ radars by hiding it inside untraceable, watertight tunnels.

Windscribe has carved out a special niche in the crowded VPN market. Its apps are impeccably engineered and offer a ton of configurability and power, including killer browser extensions and a clever ad- and malware-blocker. Windscribe is also about half the price of some of the best VPN services I’ve tested and reviewed, with more flexibility in its pricing. What does all of that mean for your wallet? I broke down Windscribe’s plans and pricing to find out.

You can download and use Windscribe’s apps for free with up to 10 GB of data.

Windscribe’s free plan isn’t on their pricing table, but it’s worth checking out.

You may have noticed that the free plan I gushed about when I went hands-on and reviewed Windscribe has gone AWOL from their pricing table. Here’s a bit of insider information: Windscribe’s default account is free. To start using it, just download the Windscribe app (desktop and mobile should both work). You’ll be prompted to sign up and log in. Once you do, you can keep using your free account until you hit your monthly data cap.

That free plan is definitely worth looking into, by the way. Unlike Hotspot Shield’s free plan, which throttles your speed to a measly 2 Mbps, Windscribe’s free plan is generous with unlimited speed and 2 GB of data per month (10 GB if you hand over your email).

Windscribe also offers an attractive à la carte plan (Build a Plan). This isn’t something I’ve ever seen before, but if you don’t need a huge server selection, you might consider it. Each location you add to your à la carte plan costs a buck per month and comes with 10 GB of data.

But here’s the interesting part. For a flat $1 per month more, you can get unlimited data. So, hypothetically, for $2 you could have an incredibly powerful VPN with unlimited simultaneous connections and data, and all the malware protection you can use.

Did You Know: In 2019, the FTC fined AT&T $60 million for throttling mobile internet speeds on their unlimited data plans. AT&T, it was discovered, was deliberately slowing user speeds down by as much as 95 percent.1

Moving up to Windscribe’s standard plans, you’ll find a monthly Pro plan (no contract) for $9 per month, and a yearly Pro plan for $4.08 per month. More on both of those in a second.

Small business owners: Windscribe does have a team plan (ScribeForce) for $3 per user monthly. Why would you need this? Well, it’s a solid option if you want to keep your company data safe and manage all your users from a single dashboard.

Needless to say, hooking Windscribe up to your company network isn’t a Friday night project. This would take a whole weekend, I’m guessing. And if you’re working remotely, static IPs aren’t included. You’d have to purchase those for an additional $2 per month a pop.

Windscribe Plans and Pricing at a Glance

At $4.08 per month, Windscribe’s yearly plan — which includes unlimited connections and data, first-rate malware protection, and the added security of diskless, privately owned servers — is pretty much in a class of its own.

The closest you’ll get to Windscribe’s value is ProtonVPN’s basic plan for $4 per month. But even that is hobbled by a two-device connection limit and throttled speeds (not to mention that it’s missing some of the terrific stuff Proton’s $8-per-month Plus Plan offers, like the NetShield malware blocker). Considering that malware attacks mushroomed by 358 percent in 2020 alone,2 I’d say that protection doesn’t just come in handy; you probably wouldn’t want to leave the house without it.

FYI: Malware is bad software that leeches onto your devices, usually with the intent to do damage.

If you go substantially lower than Windscribe’s $4 price tag, you’ll find VPNs like Surfshark and CyberGhost. It’s true, Surfshark costs only $2.49 per month, but that rate will jump to $4.98 when you renew after the first two years. CyberGhost’s 39-month plan also looks really good at $2.25 per month. But will CyberGhost protect your privacy like Windscribe? The last I checked, when I compared CyberGhost and NordVPN, CyberGhost wasn’t in the same league.

On the other hand, if you have $8 per month minimum to spend, check out VPNs like NordVPN, ExpressVPN, and Hotspot Shield, each of which is definitely worth a closer look, especially ExpressVPN, our top-rated pick. (Want to know what makes ExpressVPN such a great product? Check out my in-depth ExpressVPN review.)

Why would you want to pay $4 more per month? Simple: speed. If you need a workhorse VPN that breaks speed barriers, those three services blow most of the competition away, including Windscribe, which, let’s just say, is no Seabiscuit.

Bottom line? Windscribe’s $4-per-month plan definitely sets it apart from the crowd. Whether that’s the right Windscribe plan for you, however, is another question I’ll get to in just a minute.

Pro Tip: When we’re shopping for an internet service provider (ISP), speed is usually our primary focus. But remember, even though fast is never bad, all you really need to stream high definition video is a 25 Mbps line.

What Windscribe lacks in sheer speed and power, it makes up for in customizability. Here are two features that make Windscribe’s low monthly price an even better deal.

R.O.B.E.R.T. (Remote Omnidirectional Badware Eliminating Robotic Tool) is a robust malware blocker powered by DNS filtering. DNS filtering, by the way, just means you tell R.O.B.E.R.T. what kinds of content you don’t want to see and your browser won’t show it. (Like, say, clickbait, social networks, or gambling websites.) R.O.B.E.R.T. is free and can also double as a parental control dashboard if you’ve got small kids in your household. 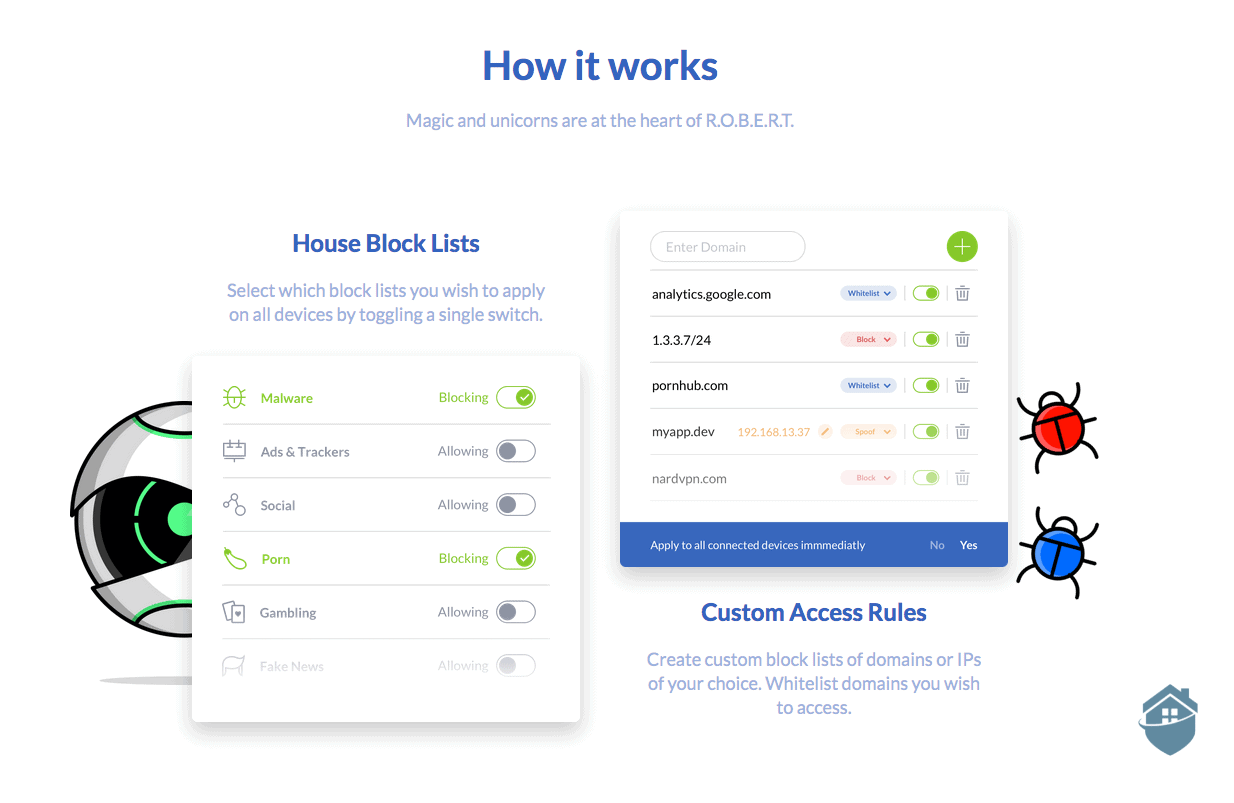 Static IPs aren’t free with any Windscribe account, but for $2 per month you can get one. A static IP won’t just slip you past fastidious websites and platforms that don’t like VPNs. If you work from home, you may need a static IP address to access your company network. So it’s nice to see that Windscribe provides this service for so little.

Get a static IP address for $2 with Windscribe.

Which Windscribe Plan Should I Choose?

While Windscribe’s free plan could be a good fit for some — it gives you pretty much everything the Pro plan does — I’m reluctant to recommend any VPN subscription that comes with as much monthly data as we were using back in 2009. In other words, Windscribe’s 2 GB-10 GB monthly data cap will be a deal-breaker for anyone that’s doing anything but light browsing.

Windscribe’s à la carte plan (Build a Plan) is another story. If you’re only planning on using your VPN at home and don’t need to access the internet in any other countries, one location for $1 per month is hard to beat. I’d just recommend paying the additional $1 per month for unlimited data.

If you travel a lot and need to unblock geoblocked services or access local VPN servers — or your internet hangouts include places where censorship is alive and strong — Windscribe’s $4.08-per-month yearly Pro plan is still a great deal with unlimited locations and servers.

Is Windscribe VPN a Good Deal?

Windscribe brings a few things to the table that may sway your credit card. First, Windscribe’s privacy stance and server security are as pristine as you can get without an actual outside security audit. Windscribe scores higher points here than any of its lower-priced competitors with the exception of privacy-focused VyprVPN. (VyprVPN’s 3-year plan is actually the lowest we’ve found.)

Plus, Windscribe offers unbeatable malware protection and their rebooted Mac and Windows apps give you unparalleled control over your privacy.

But — there’s always one of those — if you do a lot of streaming, gaming, or heavy downloading or file sharing, even that hot $4.08 price tag can’t make Windscribe pull a bigger load. In that case, you might want to check out a service like ExpressVPN. ExpressVPN’s yearly plan gives you the best of both worlds: great performance and spotless server security.

How expensive is Windscribe?

At $4.08 per month yearly, Windscribe falls directly in the middle of bargain VPNs like CyberGhost ($2 and change) and top-tier VPNs like NordVPN, Hotspot Shield, and ExpressVPN, which start at $8 per month.

Does Windscribe come with a free plan?

Yes, Windscribe has a free plan, and it’s unusually generous with access to servers in 11 countries and up to 10 GB of data monthly.

What is Windscribe’s Build a Plan?

With Windscribe’s Build a Plan you can buy access to server locations for $1 per location per month. Each location comes with 10 GB of data. If you need more data, unlimited data costs an additional $1 per month.

Is Windscribe easy to use?

Getting set up and connected with Windscribe is totally hassle-free. To fully master Windscribe’s many advanced features, on the other hand, you’ll need intermediate-and-above VPN skills.

R.O.B.E.R.T. is Windscribe’s free ad- and malware-blocker, which uses DNS filtering to keep your browsing free of any toxic websites or IPs you don’t want to see.

How many simultaneous connections does Windscribe give me?

Windscribe doesn’t have a device-connection limit, which is great for busy households.