VyprVPN gives you so much bang for the buck, there must be a catch, right? We haven’t found one yet. 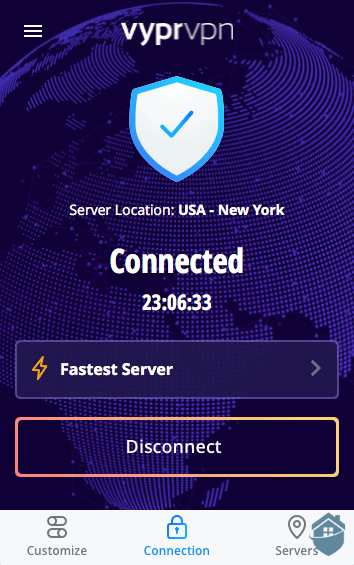 Even a great VPN service isn’t all about speed and privacy, especially when it’s time to enter your credit card number to pay. That’s because whatever amazing things your VPN promises under the hood — and however much you demand of it — your budget is still your bottom line.

VyprVPN is an interesting case. Their service is priced so low that your gut instinct is to start looking for fine print with hidden charges. (There aren’t any. Trust me.) When you dig a little deeper, it’s a very powerful privacy tool packed into some of the smoothest apps on the market. So what’s the catch?

I’ve already spent quite a bit of time testing VyprVPN. If you’re brand new to the service, you might want to check those results out first. If you’ve already read up on VyprVPN, on the other hand, and just want a quick roundup of the monthly costs and subscription options before you commit, you’ve come to the right place.

VyprVPN: a rock solid VPN service with a logo that might scare the FBI.

Where VyprVPN stands out

You’ll have to look hard to find chinks in VyprVPN’s armor. It’s a rock solid service with above-average speeds that takes internet privacy very seriously. But their apps were also designed with users in mind. While maybe not as much of a hoot as TunnelBear (see TunnelBear’s plans here), VyprVPN’s dashboard, desktop or mobile, is a pleasure to use just because it’s so intuitive and clean.

Bottom line? Tech-wise, VyprVPN can hold its own against any VPN service out there. Anyone that appreciates good user interface (UI) will love the simplicity of its apps. Now, about those crazy low prices …

VyprVPN’s three-year plan: $65 is almost too good to be true.

There are no secret traps to fall into with VyprVPN’s pricing. You get what you see. And what you get is three years of premium VPN protection for $65, which comes out to $1.81 per month (or less than a cup of coffee … in 1985). Plus, there’s a 30-day, money-back guarantee. That’s certainly something to share with your friends. Among the top-tier VPN services I’ve reviewed so far in 2023, I haven’t seen many price tags sweeter than that.

The Latest Deal: Vypr recently dropped its prices on it’s 36-month subscription. Now, instead of it being $1.81 per month, it’s $1.36 — a savings of 85-percent off of it’s month-to-month cost. It’s not clear if this is a special promotion or if this price change is here to stay.

Pro Tip: A lot of VPN providers run sales and special offers, which is great. But when you’re getting ready to purchase a multiyear VPN subscription, always look at the actual rates after the honeymoon period is over. If your service is $80 for the first two years and then $120 per year after that, for example, you’re actually looking at $50 per year for the first four years. Not bad, but a little more expensive than that deal suggests.

Not many VPN services can compete with VyprVPN’s three-year plan, although some of them get close. CyberGhost’s three-year plan will run you $2.25 per month, which is very attractive. Surfshark’s two-year plans are also in the ballpark at $2.50 per month.

After that, for comparable quality, you run up against mid-to-high-range VPN providers like ProtonVPN. ProtonVPN’s yearly packages range from basic ($4 per month) to pro ($8 per month). Then you’ve got NordVPN. Nord is reasonable at $9.92 per month after the two-year honeymoon period (see our NordVPN price guide). To see how these two services match up against one another, head over to our NordVPN vs. VyprVPN page.

And finally, ExpressVPN ranks in the upper-echelon of virtual private networks, and it has a price tag to match. That said, the ExpressVPN price isn’t so bad if you sign up for twelve months, which will run you $8.32 monthly.

I don’t throw around the word “cheap” lightly (“affordable” sounds so much nicer), but we’ll make an exception here. If VyprVPN fell out of your wallet, you might not even notice. It’s that cheap, folks.

Which VyprVPN Plan Should I Pick?

Most VPN services offer multiyear plans, and generally speaking, those are the ones to go with. VyprVPN is no exception. 60 bucks for three years of protection is pretty outstanding value for your money. And, in case you needed another good reason to go with VyprVPN’s three-year plan, it comes with a 30-day trial. If you’re not thrilled, you get your money back. So you really have nothing to lose.

Did You Know: Cybercriminals use rogue Wi-Fi hotspots with names that sound legitimate to lure victims into connecting to their faux networks. You might think you’ve connected to the Holiday Inn’s network, for example, when you’ve actually connected to the Holliday Inn. If you do, all your emails, chats, files, logins, and passwords could be compromised. Encrypting your data with a VPN1 is the best way to put the kibosh on that. 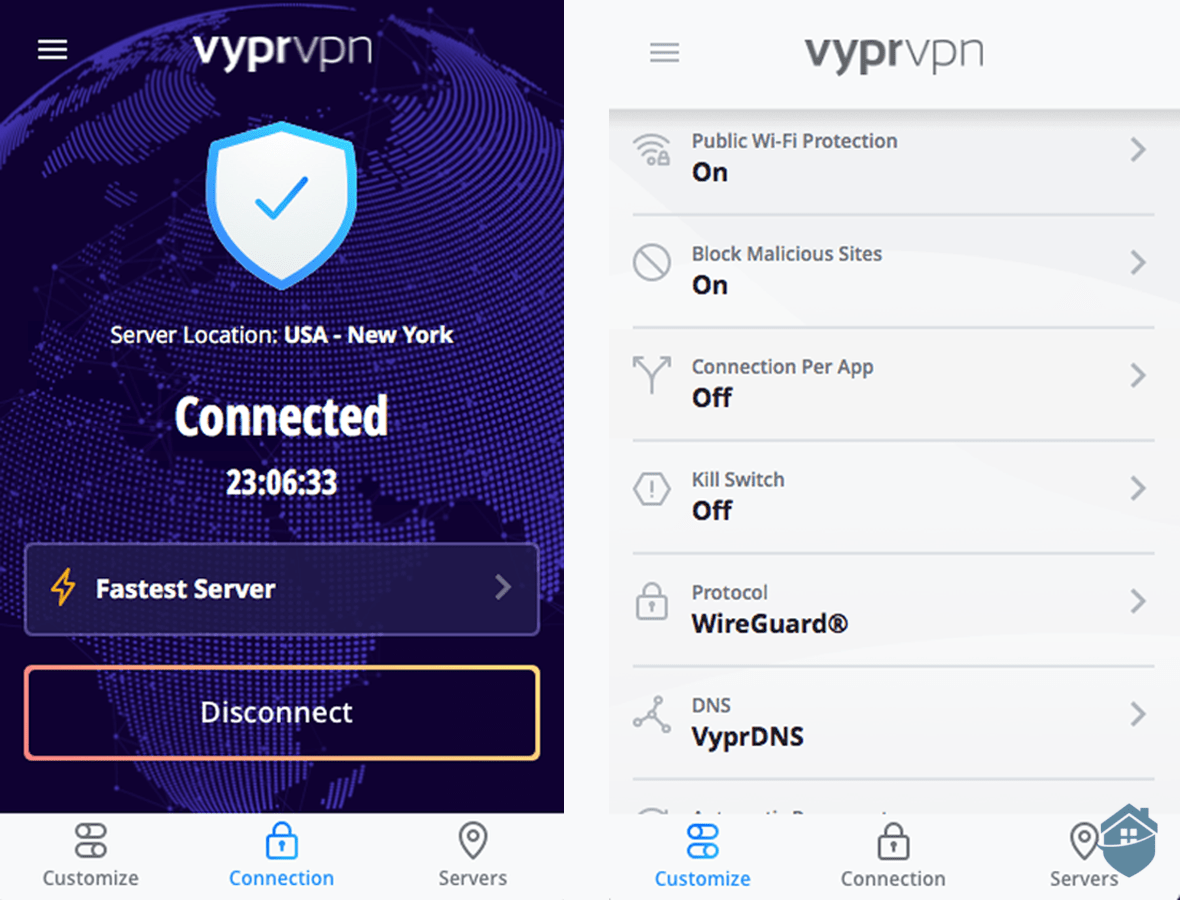 VyprVPN isn’t the only VPN service to preach the gospel of unfettered internet access, but it does stand out for how well it’s integrated crazily complex security systems into apps that are almost effortlessly easy to use. Here are their best privacy features.

When you’re out and about, it’s easy to get distracted. A phone call comes in while you’re at the café, or you’re at the airport trying to finish off some work due yesterday. One thing leads to another and you forget to connect to your VPN. With VyprVPN’s Public Wi-Fi Protection activated, your VPN will kick in automatically whenever you connect to an untrusted network. That means you’ll never have that sinking feeling that you’ve just exposed everything on your computer to some slimeball with a rogue hotspot again.

The internet is a great place to hang out, but it’s also a petri dish where you’re potentially exposing yourself to literally thousands of infections whenever you connect to a network you don’t know. These can include very unpleasant infections like worms,2 viruses, ransomware, adware, spyware, and spam and phishing attacks. With VyprVPN’s malware blocker toggled on, you can breathe easier knowing you’ll always get an alert before you stumble into a potential trap.

If you’ve heard of split tunneling, this is VyprVPN’s user-friendly version of that. Say an app you want to use won’t work while you’re connected to your VPN. You can either shut your VPN down, use your app, and then reconnect when you’re done. Or — with VyprVPN’s nifty Connection Per App feature — you can just whitelist the app (with a simple flip of a switch) and access it on your regular connection without breaking your VPN connection. Very cool.

This pretty terrible-sounding feature is actually a lifesaver. Even with the best VPN services, your VPN tunnel might crash from time to time. That’s not exactly fun, but imagine if you didn’t know it crashed? Flip on VyprVPN’s kill switch and you’ll know every time, because in addition to a push notification (toggle those on, too), their service will stop you from connecting to the internet.

Even if you know nothing about protocols, you’ll love the fact that VyprVPN gives you the option to connect with WireGuard, the newest and smartest protocol technology on the market. You can also connect via industry standard OpenVPN (you can choose your port, too), IKEv2, and Chameleon, VyprVPN’s censorship-thwarting protocol.

In case the name piqued your interest, Chameleon was designed to thwart geo-blocking. This could mean anything from helping you access Facebook in China (there’s a whole blog devoted to this on VyprVPN’s website), to letting you watch U.S. Netflix when you’re physically in the U.K. But that’s not all. According to a study3 by the University of Michigan, out of a list of 1,575 instances across 176 countries, the items most frequently geo-blocked were shopping, business, and travel websites. So, if you are considering a VPN, getting past geo-blocks isn’t just about logging into TikTok in Russia. You could be locked out of online stores, travel bookings, and job opportunities. And that’s where VyprVPN’s Chameleon protocol could come in very handy.

VyprDNS guarantees that whenever you go online, you connect through the service’s own zero-logs DNS servers. This has a number of security advantages you’ll appreciate. Governments and internet service providers (ISPs) can’t block you from accessing websites. Hackers can’t ambush you. Scammers can’t phish you.

And, if you’re wondering about “zero-logs,” it means that beyond a record of the devices you use, VyprVPN keeps no session data on your activity while you’re using their apps. You can’t get much more anonymous than that.

If you lose your connection for any reason and your kill switch kicks in, you’re actually fine. Automatic Reconnect is just a convenient feature that reconnects to your VPN for you, so you don’t have to.

That’s it in a nutshell. Keep in mind that you can access all that industry standard protection with about seven toggles and a click or two from your VyprVPN dashboard.

FYI: It’s pretty standard to describe your VPN connection as a tunnel. It’s easy to visualize. But what’s a protocol? Simply put, if your VPN connection is a virtual tunnel, your protocol is the code that tells that tunnel how to behave. It’s your protocol that really determines how your data gets from your device to a server thousands of miles away in the blink of an eye. Still a little foggy on how VPNs work? Head over to our ultimate guide to VPNs page. You’ll find all the information you need to start shopping with confidence.

Creating a great VPN service is a high-wire act. Services that succeed have to get a lot exactly right. Obviously, security comes first. Performance is high on the list, too. And everyone wants plenty of features to play with.

But at the end of the day, price is also a consideration. We all want to feel that we got a good deal. After all, the most economical VPN plans are multiyear. The last thing we want is to feel we’ve gotten saddled with a service that costs more than it delivers.

Rest assured, you’ll never have that feeling with VyprVPN. If anything, you’ll be looking for the strings. Because a VPN service this secure, this powerful, and this easy to use can’t cost $60 for three years, right? According to our tests, it can, and does.

How much does it cost?

Does VyprVPN have a free trial?

Yes, it does. If you purchase the three-year subscription, you can try the service for 30 days. If you’re not happy, they’ll give you your money back.

Is VyprVPN easy to use?

Yes! It’s completely intuitive and a pleasure to use.

How many devices can I use simultaneously with VyprVPN?

You can connect up to five devices at one time.

Does VyprVPN work on TVs?

Yes, indeed. You can install VyprVPN on your Android, Apple, or Amazon Fire TV, and stream away.