Simple, affordable VPN service with solid performance, but it’s the funky, globe-trotting bears that may win you over 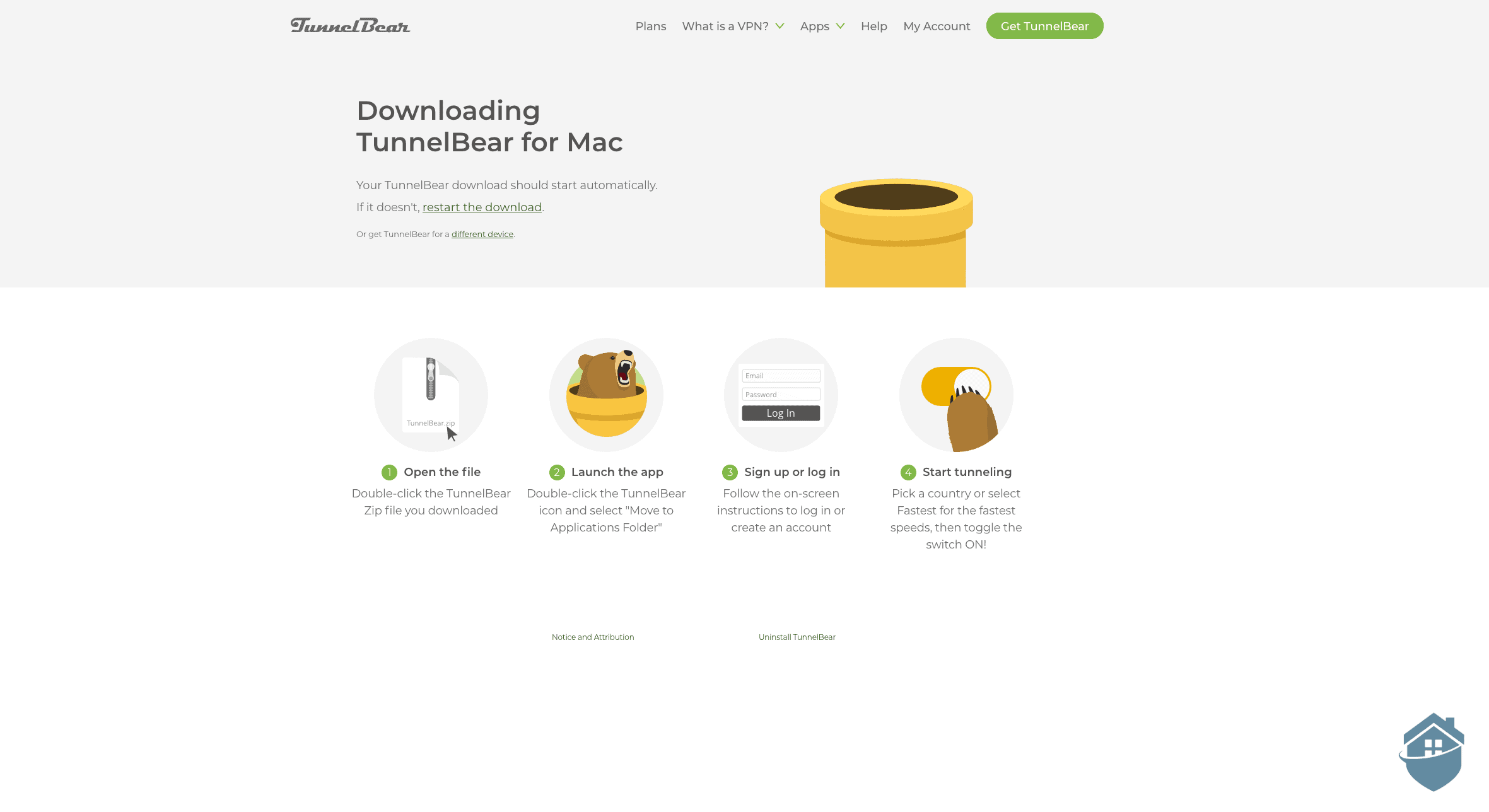 If you’re shopping for a VPN service, it’s easy to get sidetracked by industry jargon and features that don’t mean anything to you. But the fact is, a lot of us aren’t looking for anything more than a trustworthy, no-frills VPN that does the job at a price that makes sense to us.

And that’s where TunnelBear scores major points. In fact, if you want a VPN service that does just about everything you need out of the box, but without the heftier subscription fees of the big VPN guns, I’d say it’s definitely time to take a closer look at McAfee-owned TunnelBear.

I’ve already taken TunnelBear for a test-drive that covers the whole TunnelBear experience. Here I’m going to give you a breakdown of what makes TunnelBear special, how its subscription plans work, and how much you can expect to spend if you join the TunnelBear “sleuth.” (Which is what you call a pack of bears, folks, just fyi.)

TunnelBear is secure (those claws mean business), but it’s also easy and fun to use.

TunnelBear: The Good and the Better

Every VPN is trying to stand out by doing something a little different, a little better. But you can’t make everyone happy. Here’s where TunnelBear stands apart (and where it might leave you in the lurch).

Bottom line? TunnelBear is a brand experience you’re paying a little more for. What you get is: simplicity, solid performance, and something really (really) fun to play with. 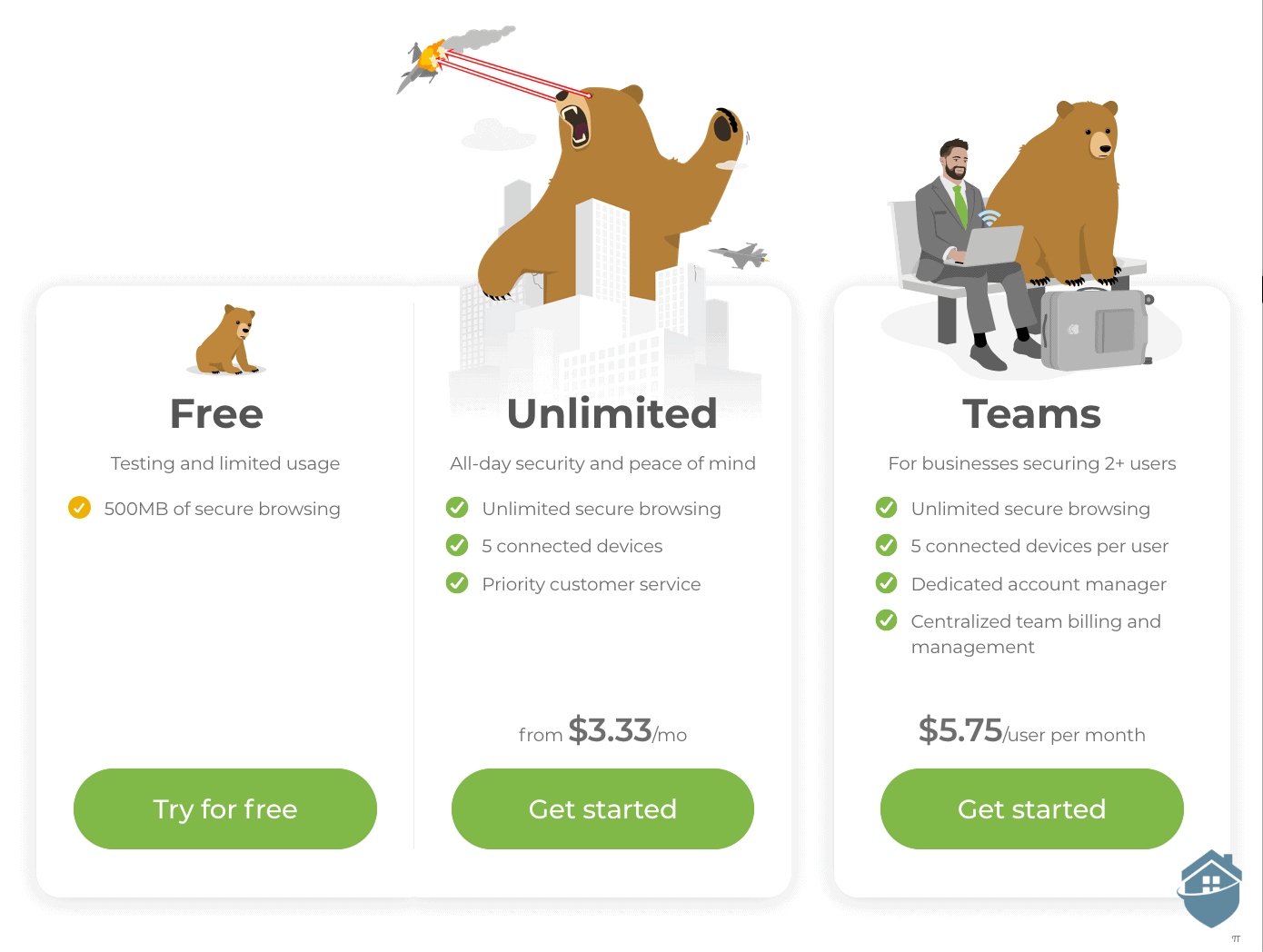 TunnelBear stands out from the “sleuth” with a free plan and a teams plan.

Not many VPN services have free plans. TunnelBear does, but there isn’t much you can do with 500 MB of data per month, which is all you get. We saw another free plan in our guide to Windscribe’s costs and services, but again, it’s pretty limited.

Interestingly, TunnelBear also has a Teams plan that covers multiple users ($5.75 per user per month), so small offices, you’re covered.

If you do go for one of TunneBear’s paid subscriptions (not teams), you have a few options, none of which includes the kind of money-back guarantee many comparable services offer. TunnelBear rates are pretty standard, but let’s take a closer look anyway.

Like most VPN services, TunnelBear gives you monthly, yearly, and multiyear options. The longer you commit, the more you save. TunnelBear’s yearly rate ($4.99 per month) will save you 50 percent off the $9.99 monthly rate, for instance. If you subscribe to TunnelBear’s three-year plan ($3.33 per month), you’ll be knocking roughly 66 percent off your bill. The math is pretty simple. The question is: How does TunnelBear’s pricing compare to other top-tier services?

Pro Tip: When it’s finally time to purchase a VPN subscription, a lot of us get cold feet. A money-back guarantee usually takes away some of that stress, but alas, TunnelBear doesn’t offer any guarantees. For me, this isn’t a deal breaker. Sometimes it’s better to bite the bullet and trial the VPN for a month, even if you end up spending a little more that way.

My advice here is always to head straight for the yearly or multiyear subscription rate because those are the prices that make the most sense.

At $3.33 per month over three years, TunnelBear isn’t the cheapest service out there. (Maybe it’s all the honey those bears need to stay happy.) For comparison, CyberGhost’s 36-month plan will run you $2.25 per month. VyprVPN, another spectacular no-frills VPN service I recently tested, only costs $1.61 per month for three years! You can read my full, hands-on review of Vypr VPN here.

On the other hand, you will find VPN services with significantly heftier yearly bills. After the honeymoon period runs out on your two-year NordVPN subscription, for instance, you’re looking at $9.99 per month.

All of which is to say, in the grand scheme of VPNs, I found TunnelBear to be attractively priced.

Which TunnelBear Plan Should I Pick?

Assuming you aren’t outfitting an office network, and that you need more than 500 MB of data per month, I recommend TunnelBear’s three-year plan
hands down. It’s clearly the best value for your money. But there’s one caveat you should consider.

Before you commit to any multiyear VPN subscription, you really want to test- drive it in all the situations and on all the platforms and devices you’d normally be using it: streaming, unblocking Netflix, private browsing, ad- blocking, torrenting, etc. That’s just not going to happen on 500 MB of data.

So, if TunnelBear looks like a great fit for you, I’d suggest purchasing a one-month subscription for $9.99, rather than just using the free plan for a day. That’s really the only way to get a good idea of how the service will meet your everyday VPN needs.

There’s good news if you’re into privacy ecosystems. TunnelBear is more than just a hip, user-friendly VPN service. They’ve got a slick password vault and a pretty sophisticated ad blocker that works as a Chrome or Firefox extension.

The service’s ad blocker, TunnelBear Blocker, is free. As tracking cookies fall by the wayside,1 and more invasive technologies2 take their place, you’re going to want to have an ad blocker you can trust, so this certainly sweetens the deal. Even better — and similar to VyprVPN’s malicious site blocker or NordVPN’s Cybersec — TunnelBear Blocker does double duty: It lets you browse ad-free and protects your devices from malware. You can see how Nord and TunnelBear’s ad blockers measure up against each other in our TunnelBear vs. NordVPN comparison guide.

TunnelBear also has a stylish password manager, RememBear, that comes with a “note vault.” RememBear will run you $6 per month, as of this writing. That’s par for the course. And that’s the good news. 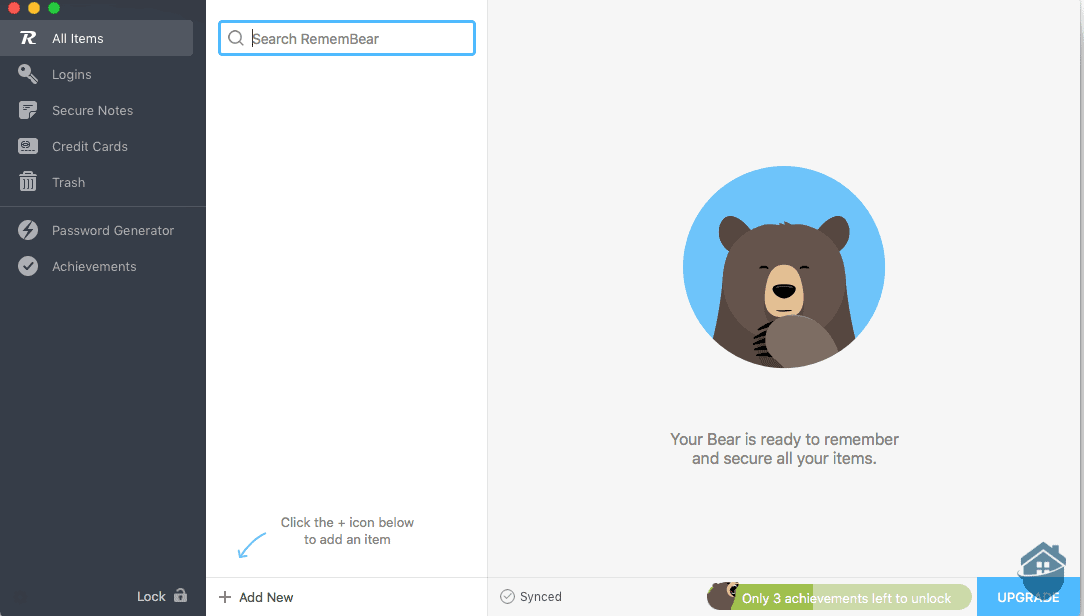 While I can’t say this is terribly bad news, RememBear isn’t really an extension of TunnelBear’s VPN service. It’s a separate, bear-themed service with its own dashboard and account login, unlike, say, CyberGhost VPN’s password manager, which is part of your CyberGhost account.

Like I said, not the end of the world, but integrating RememBear into its core VPN service might be something for TunnelBear to consider down the line.

FYI: Still scribbling your passwords down on a sheet of dog-eared paper you keep in your desk, folded up in a pants pocket, or on the refrigerator? It’s time to consider a password manager. Password managers give you as many strong, unique passwords as you need, all stored in a vault that no one but you has the key to. When it’s time to log in, just click your browser extension and autofill.

As I said, TunnelBear is light on features, but which ones does it actually have? Well, you won’t find server loads or a Favorites list, but you will find:

This is your kill switch, a must-have for just about all of us. When it’s on, and your VPN disconnects for any reason, VigilantBear stops you from connecting to potentially unsafe networks.

GhostBear makes it seem like your VPN traffic is normal internet traffic. Why would you need this? For two reasons: one, you’re in a country that restricts VPNs, and two, you want to make it more difficult for a suspicious internet service provider (ISP) to throttle your connection.

If your ISP has put the whammy on you and throttled your speeds, just flip on TCP Override and you should be able to enjoy normal internet speeds again.

You can automatically connect to the internet with TunnelBear when you’re on the go (Android and iOS only). This is a great feature to have if you want to eliminate any chances of accidentally connecting to dangerous Wi-Fi networks.

Split Tunneling (for Android and iOS)

When you “split” your VPN tunnel, you choose which websites and apps pass through it. Like TunnelBear’s auto-connect feature, this is only available for TunnelBear mobile apps, which is a bummer. If you have any apps or websites you visit regularly on your desktop that don’t allow VPN connections (banking apps, for instance), you’ll have to disconnect from your VPN to access them.

In a nutshell, you need protocols to send data through your VPN tunnels. TunnelBear gives you two options. You just can’t choose which one you use.

You’re good to go here. Contrary to popular belief, TunnelBear does unblock Netflix. If streaming is important to you, and you’re looking to comparison shop, you might consider checking out our ExpressVPN vs. Tunnelbear breakdown. Both services are great for unlocking geo-restricted content.

TunnelBear lets you protect up to five devices at the same time. This is usually enough for a household of two, possibly three VPN users. If you’re looking for a VPN service that gives you more leeway, IPVanish’s 10 connections are a safe bet. If that isn’t enough, go absolutely wild with Surfshark’s unlimited connections.

Sound like enough features for you? More than enough? Great. I bet you’re going to love TunnelBear.

Pro Tip: A Favorites list comes in real handy when you’re using your VPN for different things. You might find a server you like for streaming videos or a good connection for torrenting. Having those connections starred and saved in one place can make your life a lot easier. So, if you’ve found the perfect VPN, always check and see if it has a Favorites list.

TunnelBear is an affordable VPN that’s almost impossibly easy to use right out of the box. But it’s also a VPN that will bring a smile to your face when you use it with most, but not all, of the features you need to stay conveniently private online.

Is that enough to make you pull out your credit card?

In my book, services that make us happy are a major incentive these days. We just spend too much time3 on our apps not to enjoy using them. If you feel the same way, TunnelBear is a really great deal.

How much does it cost?

Does TunnelBear have a free trial?

Yes, they do, but you only get 500 MB of data per month, which makes it difficult to explore the whole product.

Is TunnelBear easy to use?

It’s almost insanely easy to use, and a blast — barring a few user interface (UI) snafus on the Mac desktop client.

How many devices can I use simultaneously with TunnelBear?

TunnelBear lets you protect up to five devices at the same time.

Yes, it can. In my test, unblocking Netflix was a piece of cake.