How Much Do You Make Compared to Other American Workers?

Don’t count other people’s money, so the advice goes. But that’s no fun. After all, if you don’t know how much money your neighbors make, how can you know whether you’re better than them or not?

Joking aside, the truth is what Americans earn varies enormously depending on where they live, with some states boasting far higher typical wages than others. Some states have seen wages and earnings go up over the past decade, while others have seen wages stagnate or even fall.

Since it’s unlikely you’ll muster up the courage (or stupidity) to walk over to your neighbor’s house and ask them how much their salary has gone up in the past 10 years (or even ask your spouse what they earn; no seriously), we’ll turn to national data to figure out where U.S. workers have it the best (and worst).

We’ll analyze wages and earnings, which tell us how much jobs pay as well as how much Americans earn from work. It’s important to note that this does not tell the complete picture of all possible income streams because there are ways other than work to generate income, such as by investing. But for the majority of Americans, the lion’s share of their income (and most often 100% of their yearly income) is derived from work, and the most robust federal data is available on wages and earnings.

How Much We Make

The median national wage for all occupations is a yearly sum of $38,640, which equates to about $18 an hour. While this figure varies widely by state, only about 4 in 10 states have median annual wages higher than that. 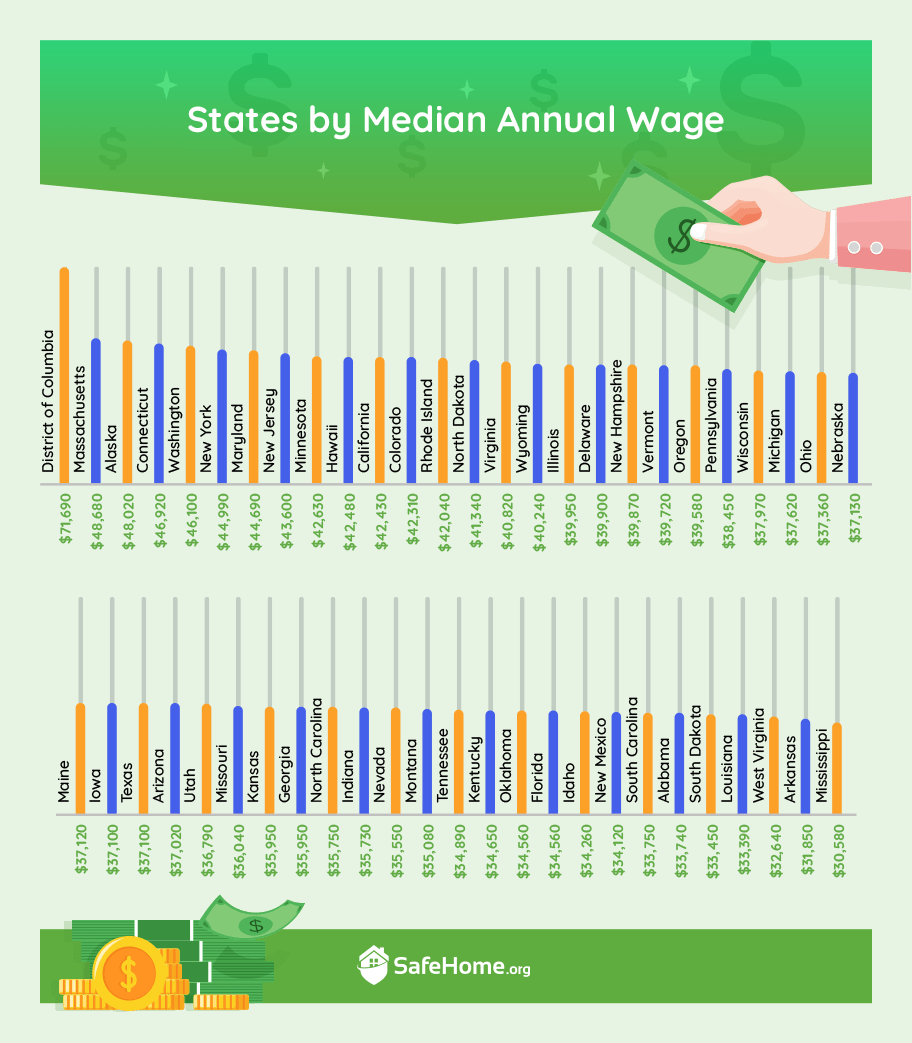 The 90th percentile wage in Washington, D.C., meaning the wage that’s higher than 90% of all the others, is the nation’s highest at $164,200, but several states have top wages in the six figures. 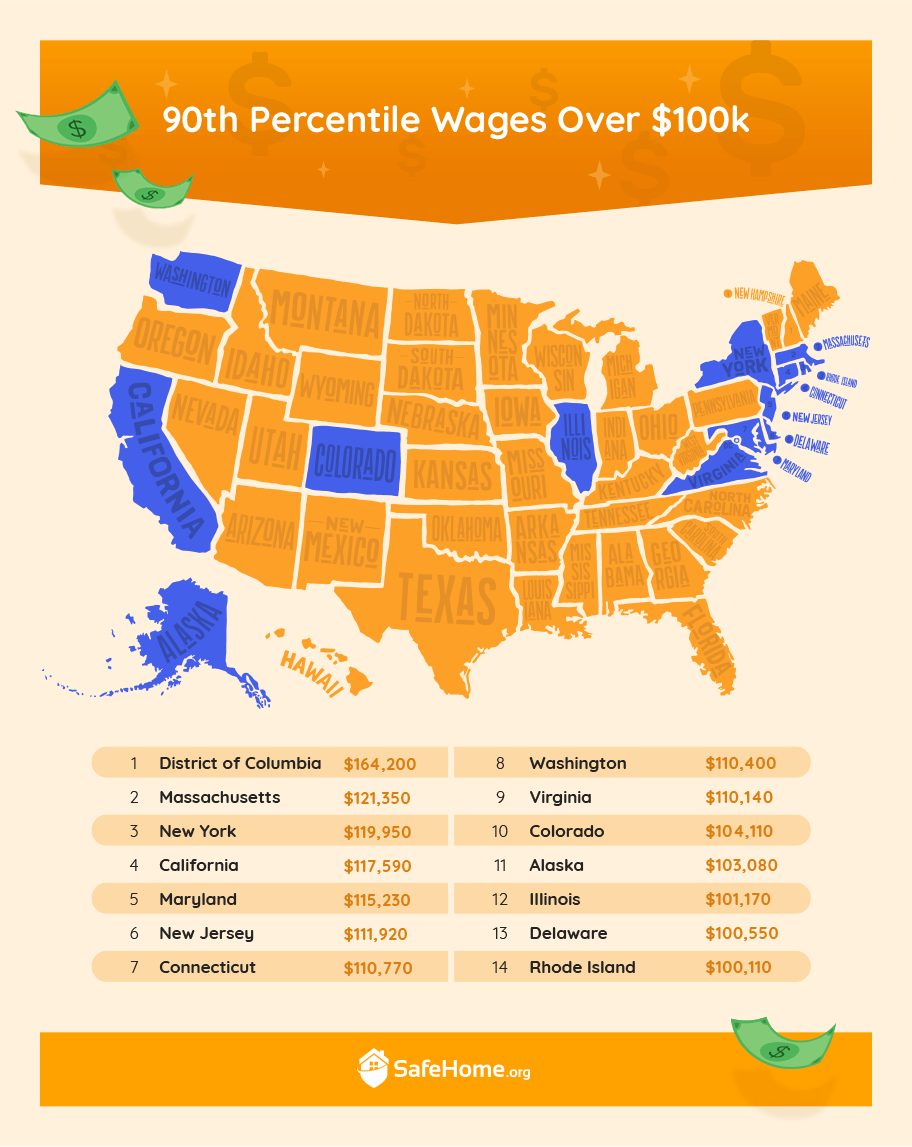 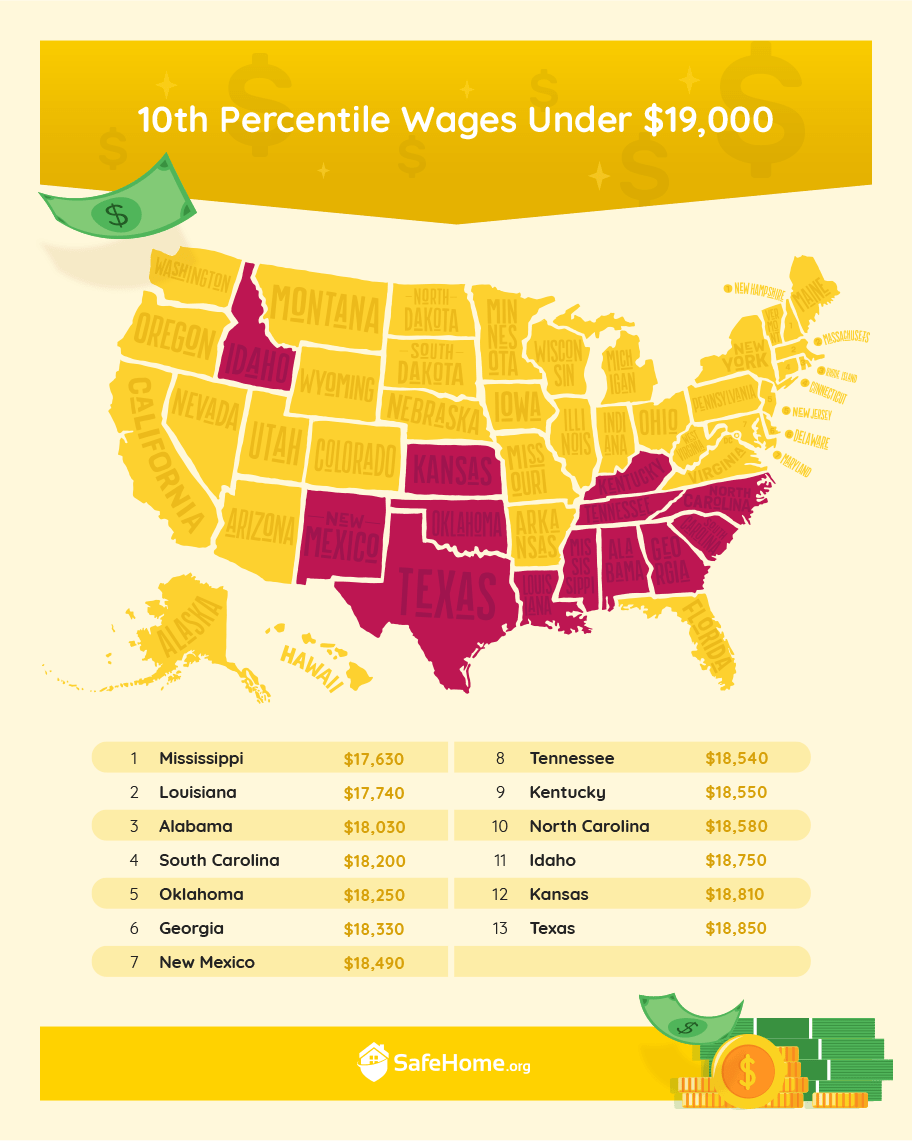 Ten of the 13th states with the lowest low wages are in the South, including all of the top six. D.C. has the highest 10th percentile wage at $28,660, which is almost as high as Mississippi’s overall median yearly wage — $30,580.

How We Stack Up 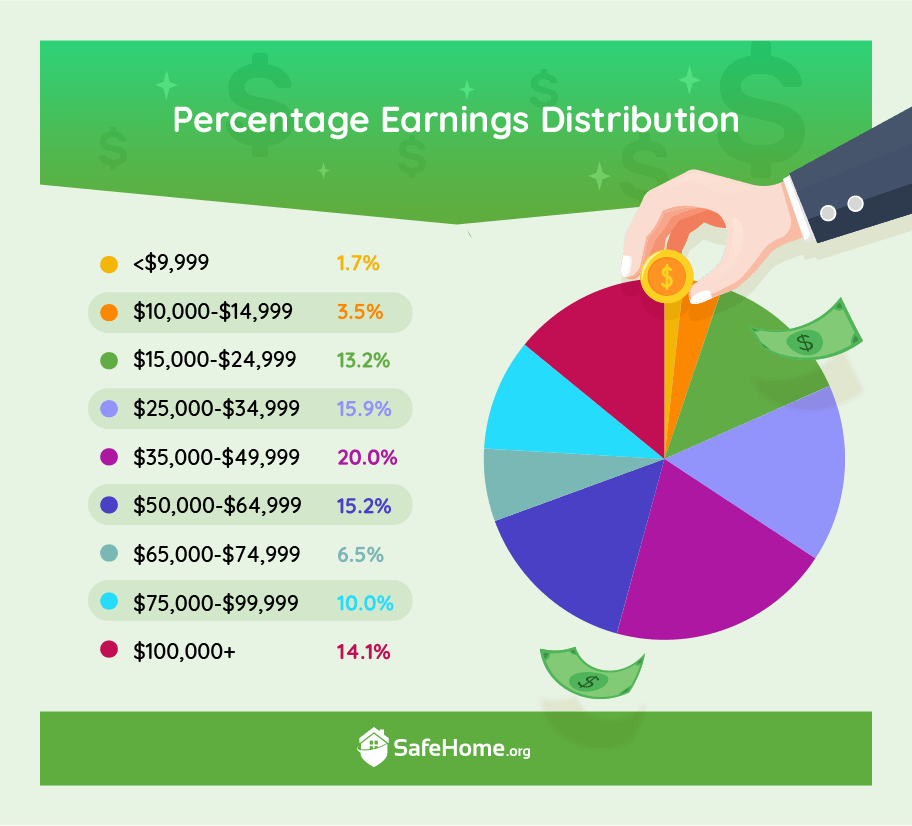 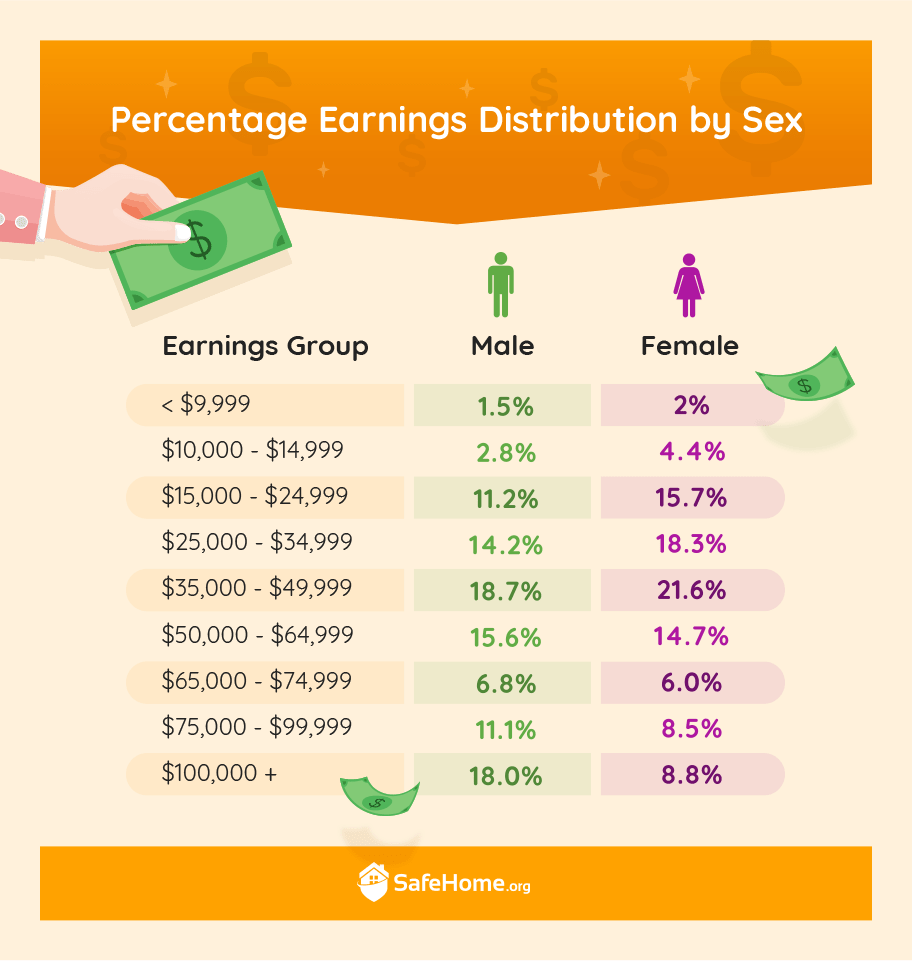 As with wages, the state-level data shows pretty wide variation with more than 30% of District of Columbia residents earning more than $100,000 and more than 25% of Arkansans earning less than $25,000.

How Things Have Changed

Nationally, the median annual wage has gone up by just 2% over the past decade, rising from an inflation-adjusted $37,896 in 2008. Most states have seen wages increase in that time, and most of the increases have been higher than the national median, though several have actually seen their median wage decline. 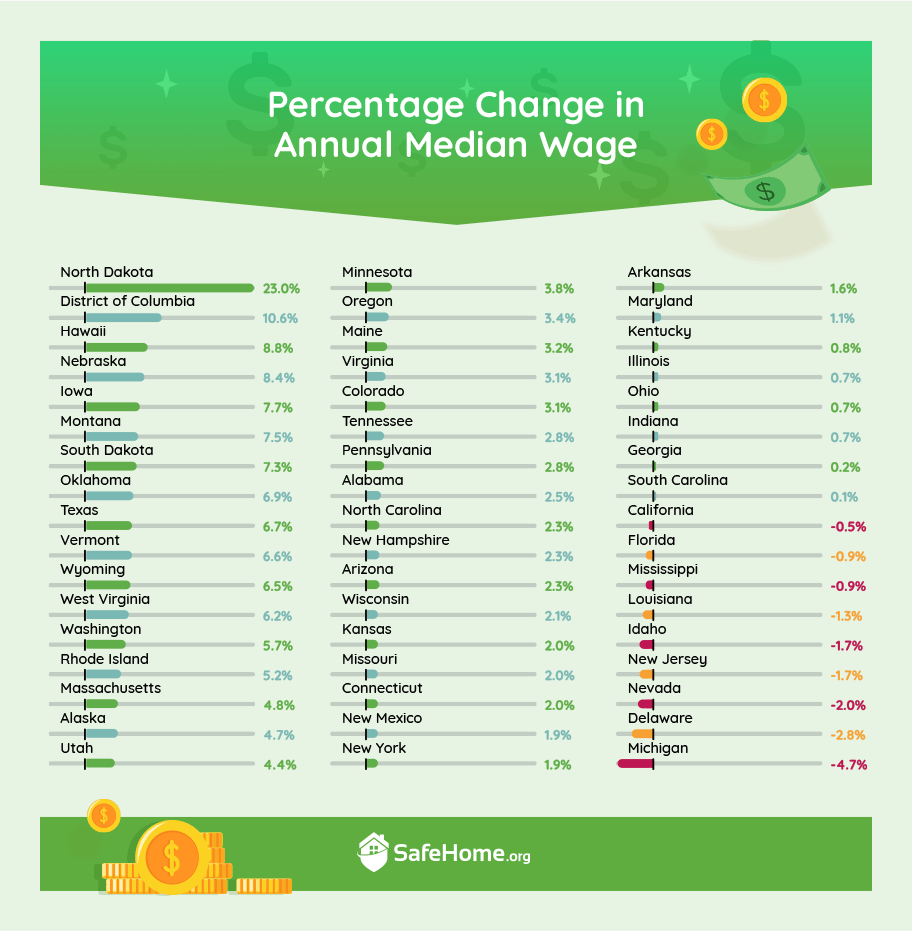 Nine states saw their median wages fall after adjusting for inflation, and 10 others saw increases lower than the overall national increase of 2%. The majority of the gains over the past decade have been among the lowest and the highest wages. 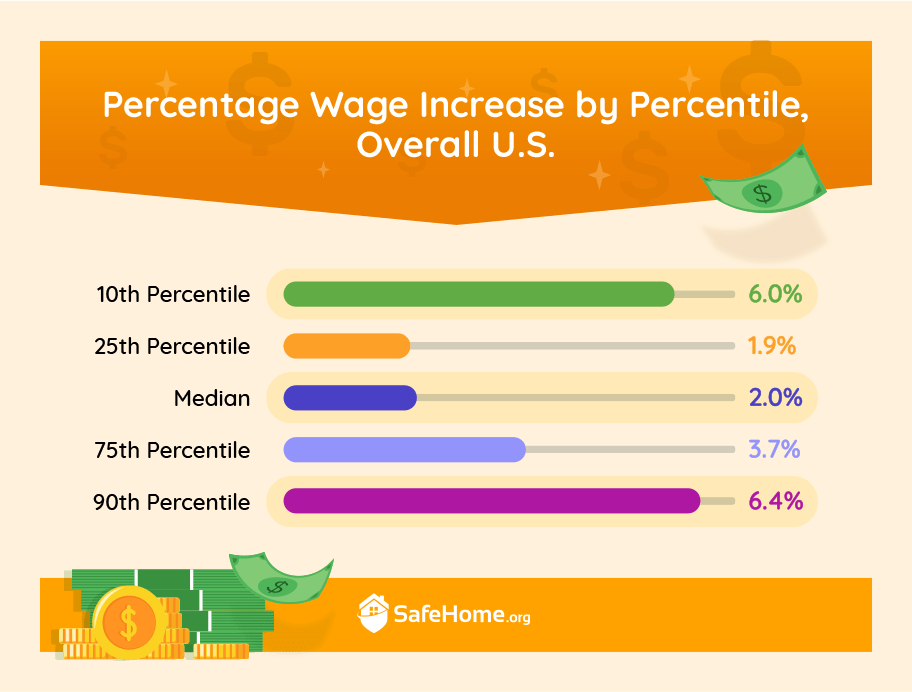 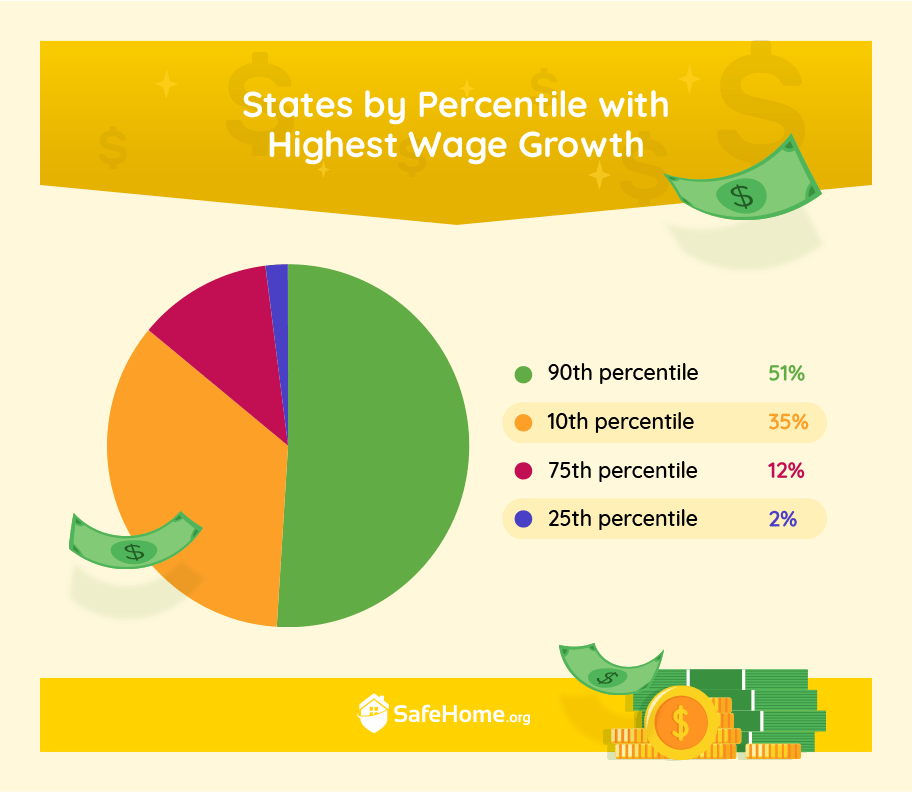 We all want to believe that the money we earn is because of our unique experience, skills and hard work. And that’s certainly true for lots of people, but unless almost everyone else is lazy, very few American workers are truly excelling when it comes to wages and earnings. According to experts, the link between wealth and happiness peaks when earnings reach $75,000 a year — only about 1 in 4 Americans are at that point, so wherever you stand among your fellow Americans, chances are good you’ve got a long way to go.

Income distribution figures for the nation and each state came from the American Community Survey 5-Year Estimates, which are published and updated regularly by the U.S. Census Bureau. As already referenced, we used data on earnings in the past 12 months, which estimates the percentage of full-time year-round workers who fit into each income bracket; it’s also broken down by sex. We used the advanced search function at American Fact Finder to build our data.

Data on median annual wages came from the U.S. Department of Labor’s Bureau of Labor Statistics, which publishes information annually that provides a snapshot into the state of American employment, including wages, unemployment figures and occupational data. We used the state and national data found on this page for May 2018 and May 2008. We converted the 2008 wage information into 2018 dollars to create a consistent comparison.

The information and images on this page are free to use for noncommercial purposes. If you wish to share anything from this page, please provide a link back to this URL.