Most of us learn at a young age that words have power. Some words are kind and used to inspire and persuade, while others make us feel fearful or intimidated. A sign displayed outside your home sends a message to the world, but how others perceive this message depends on the eye of the beholder.

A previous study on yard signs viewed these messages through the lens of politics. Researchers attempted to determine why people displayed political signs (mixed motives) and how the messages they sent affected neighborhoods (mixed emotions).

To expand on this research, we recently undertook a new study to further examine yard sign usage, broadening our view to include signs about security, privacy, and personal opinions. We collected results that illustrate why we display yard signs, how they’re perceived by our neighbors, and even whether Americans think the benefits of free speech via yard signs is worth the grief they can cause in our neighborhoods.

The Messages We Send

Signs are a way for people to quickly communicate information to those who approach or pass by their home. Our study began by asking over 1,000 Americans what kind of signs they recently displayed to send a message to neighbors and others in their community. 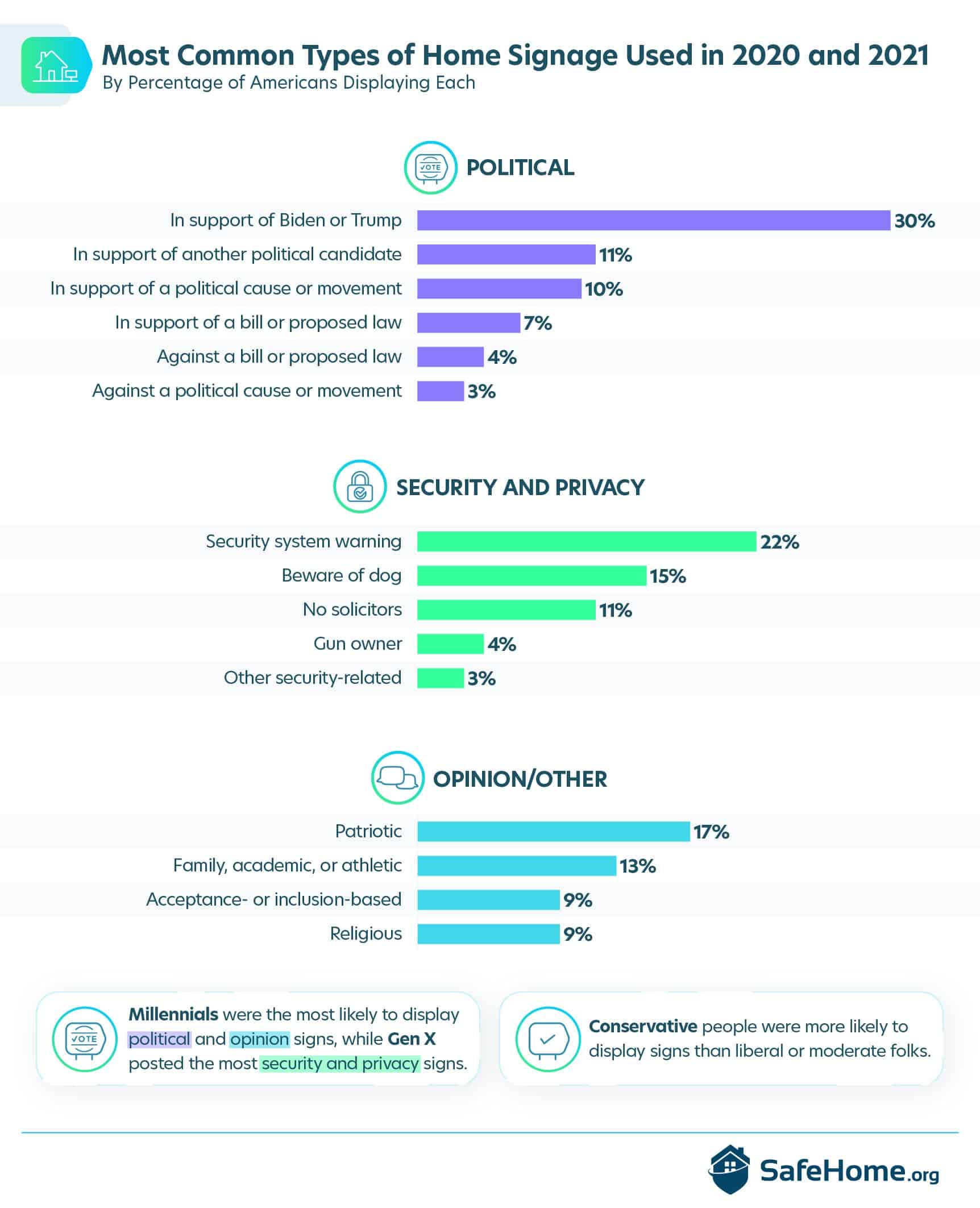 Our study revealed that nearly 7 out of 10 Americans displayed a yard or window sign in the past year. Millennials and Gen Xers used signs more than other generations. We also discovered that urbanites (74%) and rural residents (78%) were more likely to use signs than suburban dwellers (64%).

When it comes to the types of signs people choose to display on the outside of their home, there were some clear generational preferences: a higher percentage of millennials (44%) displayed political signs than Gen X (39%) or baby boomers (35%). A similar pattern emerges when examining signs from the “Opinion/other” category: 36% of millennials display these signs while 30% of Gen X and 33% of baby boomers do the same. The differences between generations here aren’t huge, but they’re pretty consistent – Millennials seem more interested than older generations in proudly displaying their opinions to the world.

Security signs are an easy way to alert others about your home safety measures. They sometimes act as a deterrent to potential intruders. Unfortunately, some people cut corners and post fake yard signs that aren’t backed by real security measures. 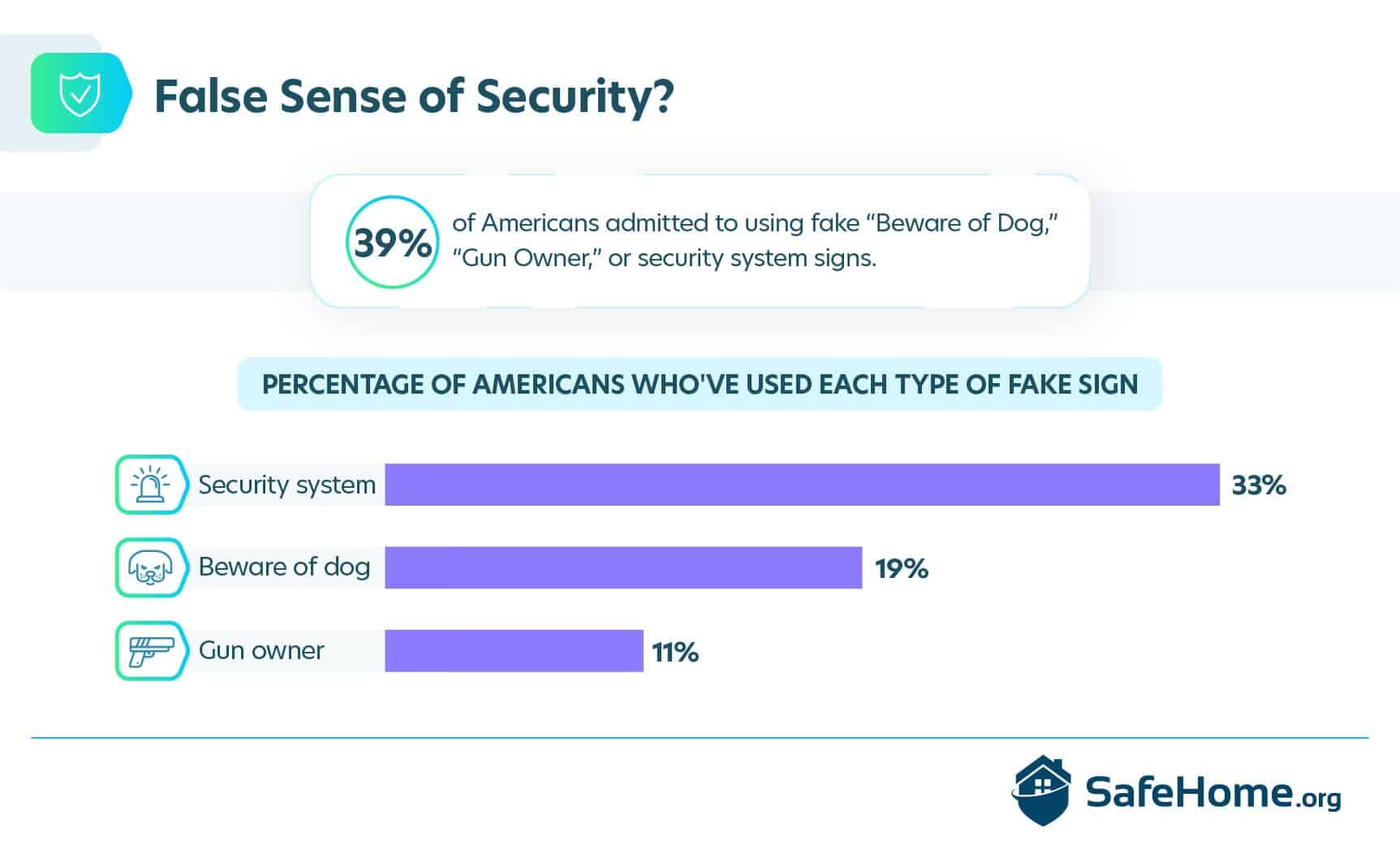 According to a recent safety study by Consumer Affairs, Americans most often display security signs for home alarms, guns, and cameras. Forty-percent of people believed gun signs convey the most effective message to deter burglars; however, opinions gathered from convicted burglars offer unique insight. These criminals are more concerned about getting caught on surveillance cameras, setting off alarms systems, finding people at home, and encountering dogs than they are about weapons in the home.

Our study reveals that one-third of Americans admit to displaying a security system sign without actually having one installed in their home. Although fake yard signs are a less expensive option than well-performing security systems, the popularity of these bogus signs means that burglars are likely wise to the trick. Investing in a real system helps homeowners to avoid a false sense of security while simultaneously increasing home protection.

After finding which types of signs people display, we investigated why people choose to post these messages. What were the driving forces behind their actions? When a person’s intentions are more clearly understood, a more civil dialogue between neighbors may be possible in the midst of controversy.

Perhaps surprisingly, most Americans (71%) used controversial or opinionated signs simply to express themselves. They weren’t seeking to convert their neighbors or start a conflict with others. The majority viewed signs as a way to show who they are and where they stand. In fact, people were more than twice as likely to display a sign in solidarity with like-minded neighbors than they were to do so in protest of neighbors who have different signs. 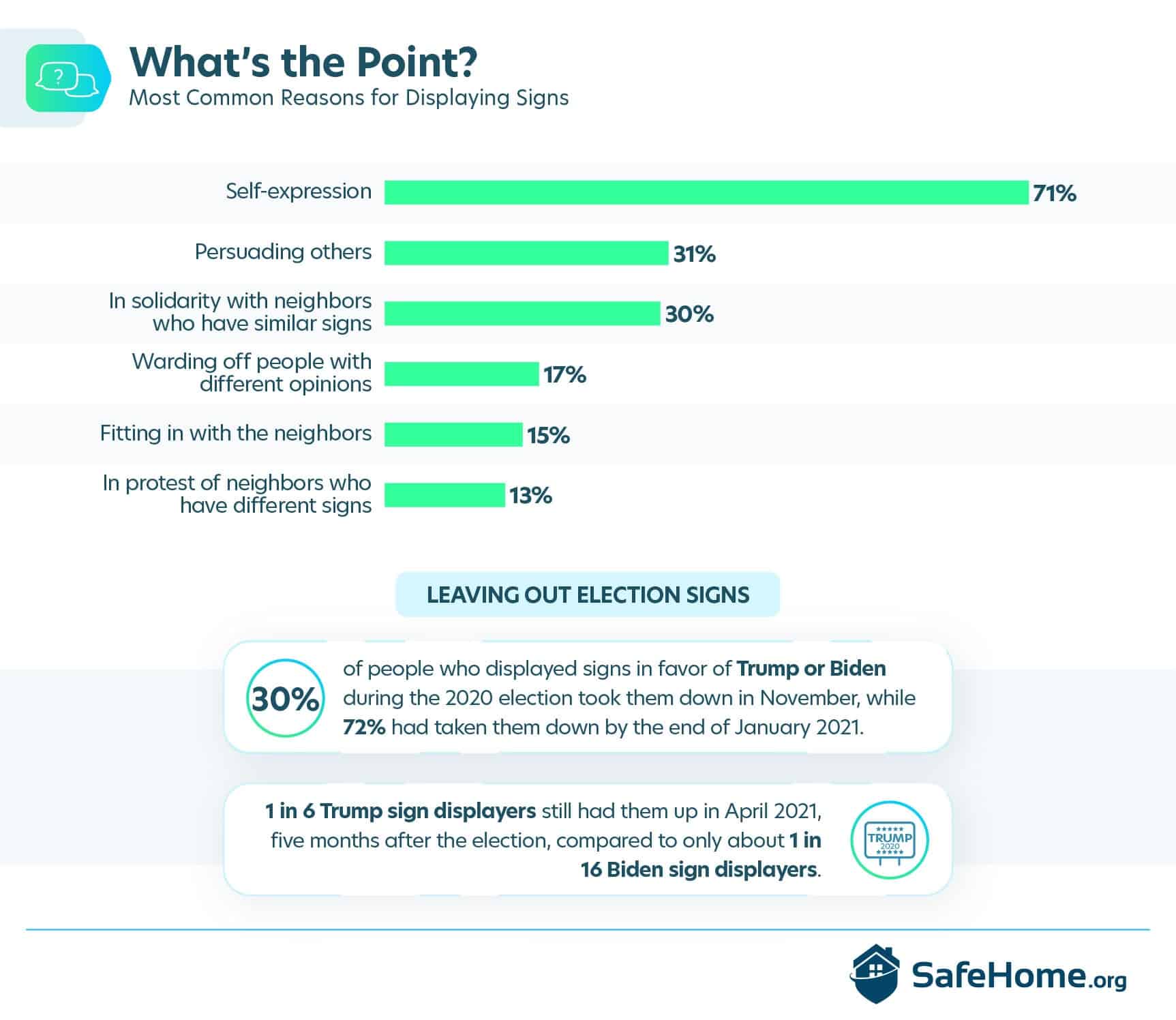 Extreme political followers on both ends of the spectrum were the exceptions to this finding, as they were twice as likely to use signs as a way to protest those they disagree with in their neighborhood. Those on the far left end of the spectrum were more positive during isolated sign wars, being about 50% more likely to use signs as a form of solidarity than those on the far right.

When we accounted for age, we found that Gen Xers born between 1965 and 1980 were more likely than other generations to use signs as a way to align themselves with or against other sign displayers. Millennials were more likely to display signs in an attempt to bring others to action – 36% of millennials rated persuasion as one of their top three reasons behind posting a sign.

As for keeping up with the Joneses, we received some surprising results. Suburban residents, who tend to live in neighborhoods that exude conformity, were about half as likely to use signs to fit in with the neighbors than people living in rural and urban areas. Apparently, the pressure to appear the same is stronger within these two divergent communities.

The Effect of Signs on Safety

From their front yards to their front doors, people across America broadcast messages every day via printed signs. Let’s take a look at the emotional impact of their words. 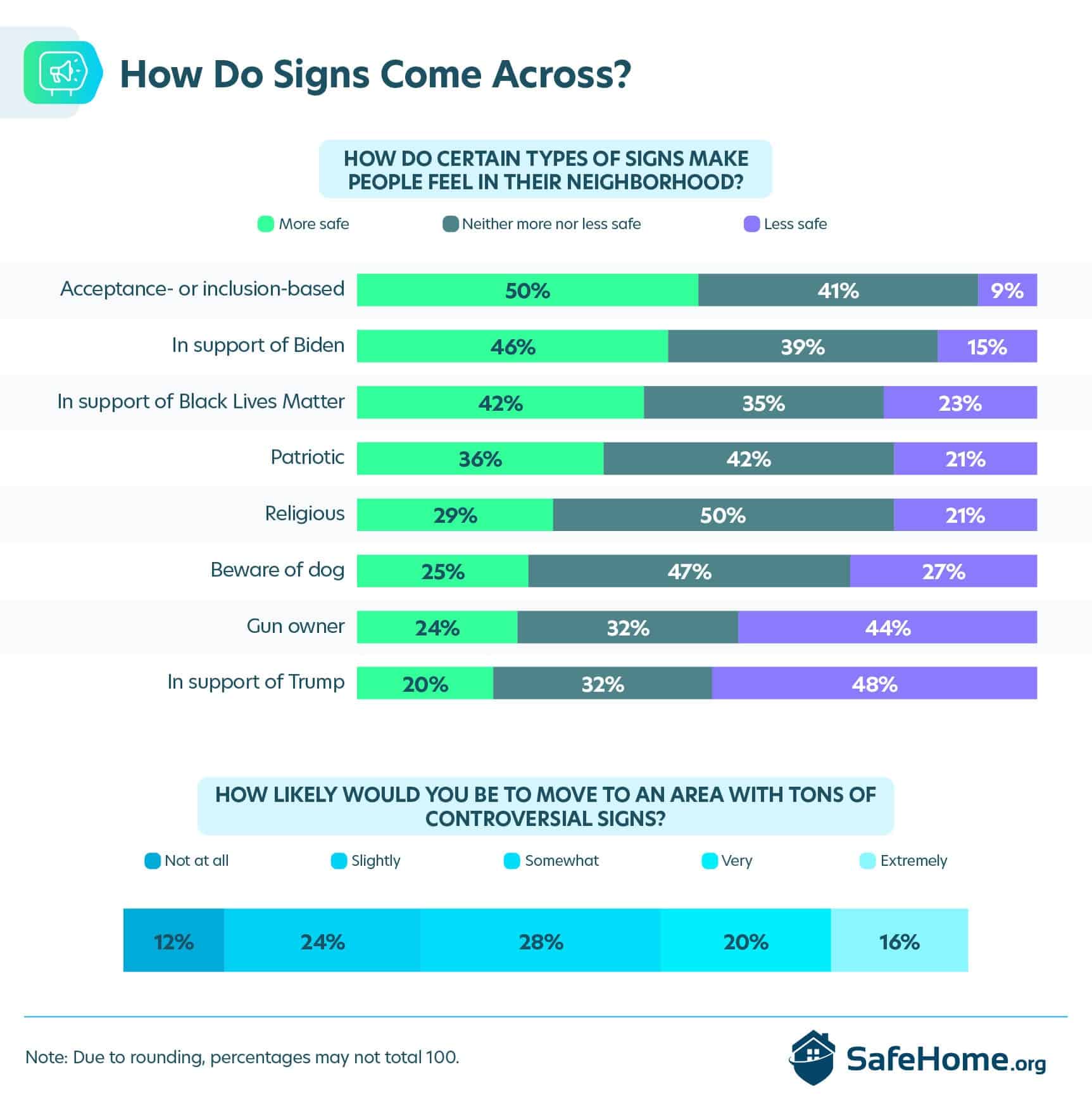 Our study shows that controversial yard and window signs impact the perception of a neighborhood – more than half of Americans felt more safe or less safe based on the signs their neighbors displayed.

We found strong correlations between how well people know their neighbors and how powerfully the signs in their neighborhood affect perceptions of safety. Those who knew their neighbors at least somewhat well were two to four times more likely to feel safe around the following types of signs:

Most Americans believe that free speech is important. But, as issues become more divisive across our nation, we wanted to gauge whether people believe controversial signs should be banned from their communities. 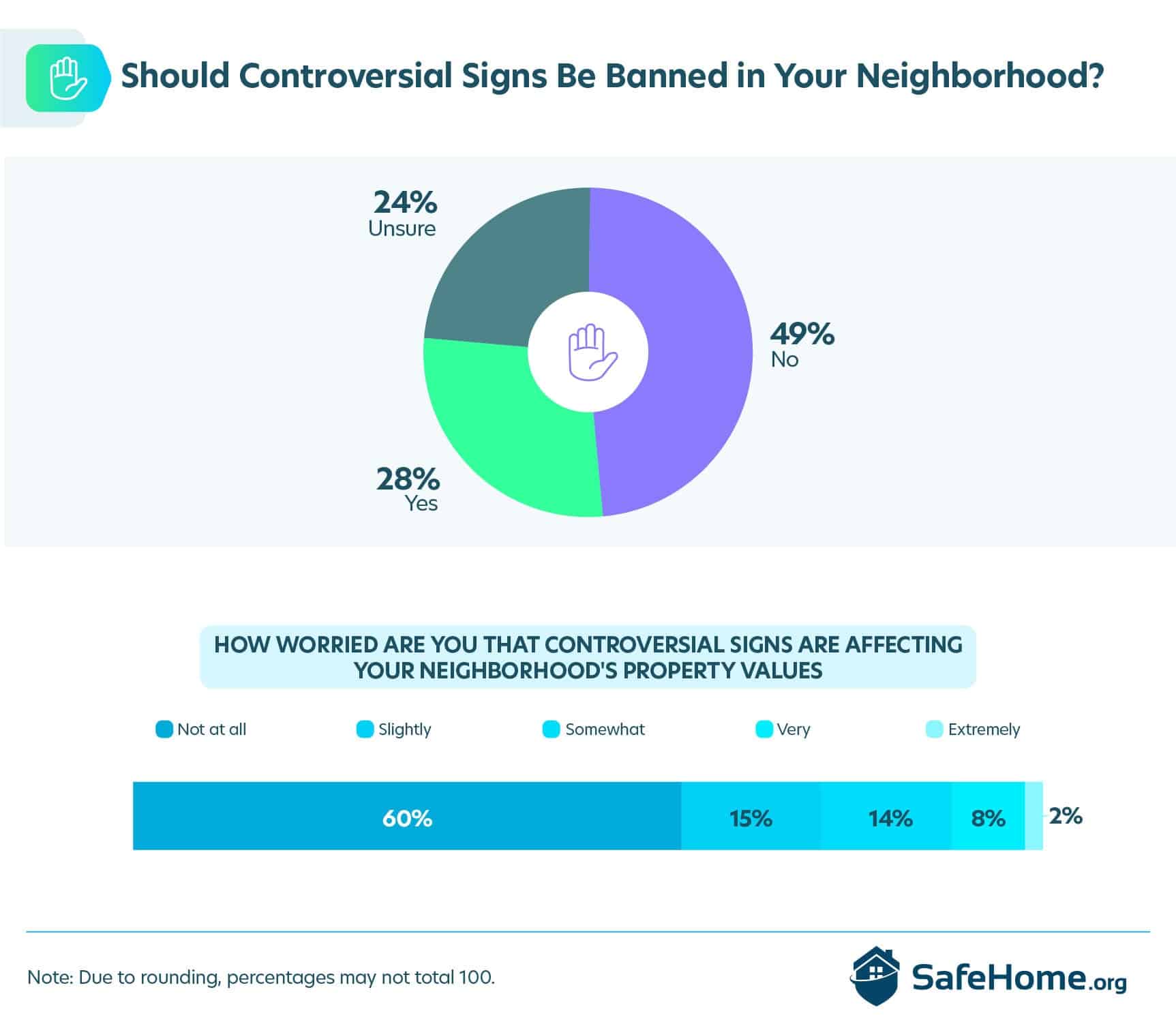 More than 1 in 4 Americans were in favor of controversial or opinionated signs being banned in their neighborhood, more so in rural areas than in the suburbs or city. This finding held true across an array of people who may or may not post signs outside their homes. Many people (40%) felt controversial or opinionated signs could have an effect on property values in their area, but less than 10% were truly worried about the issue.

Those on the opposite ends of the political spectrum held the strongest opinions about the freedom of self-expression on owned property. Sixty-five percent of extremely conservative Americans were much more likely to oppose banning controversial signage compared to moderates. Extremely liberal Americans were the next most likely, with 57% voicing opposition to a ban on signs.

Many Americans use yard and window signs to send a variety of messages. People most often post signs with good intentions and use them more as a way to express themselves than to cause conflict with others. Younger people have a stronger emotional response to positive and negative signs in their area. Most Americans are currently either against banning controversial signs in their neighborhoods or unsure whether this is the best course of action when dealing with hot-button topics in their community.

All respondents included passed an attention-check question. The main limitation of this survey is the reliance on self-report, which can lead to a set of issues including but not limited to telescoping, recency bias, and survey bias.