43 percent of parents are more worried about their children’s safety this year than last year, and social media safety is their top concern.

As children across the U.S. head back to school and many of their parents return to the office, daily routines seem to be returning to normal for millions of families. While COVID-19 and the current surge of the delta variant continue to play a major role in daily life, the virus is far from the only safety concern parents have for their children. In fact, our research indicates that almost half of American parents are more concerned about their kids’ safety today than they were last year. To understand what issues have parents most worried, we conducted a study of parents whose children are 18 or younger and who are attending in-person school this year. Here’s a look at some of our key findings: 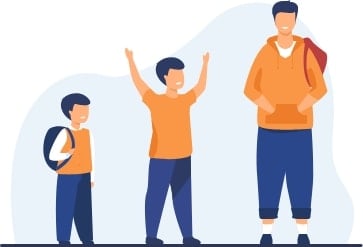 What Has Parents Most Worried?

Just under one in three parents said ensuring their kids are safe online or while using social media was their biggest safety concern, and it’s little wonder why. Today’s youth are the most internet-connected generation in American history: about 95 percent of children 3-18 years old have internet access at home.1 About 45 percent of teens say they’re almost constantly online,2 while 40 percent of children in grades 4-8 said they’d connected or chatted online with a stranger.3 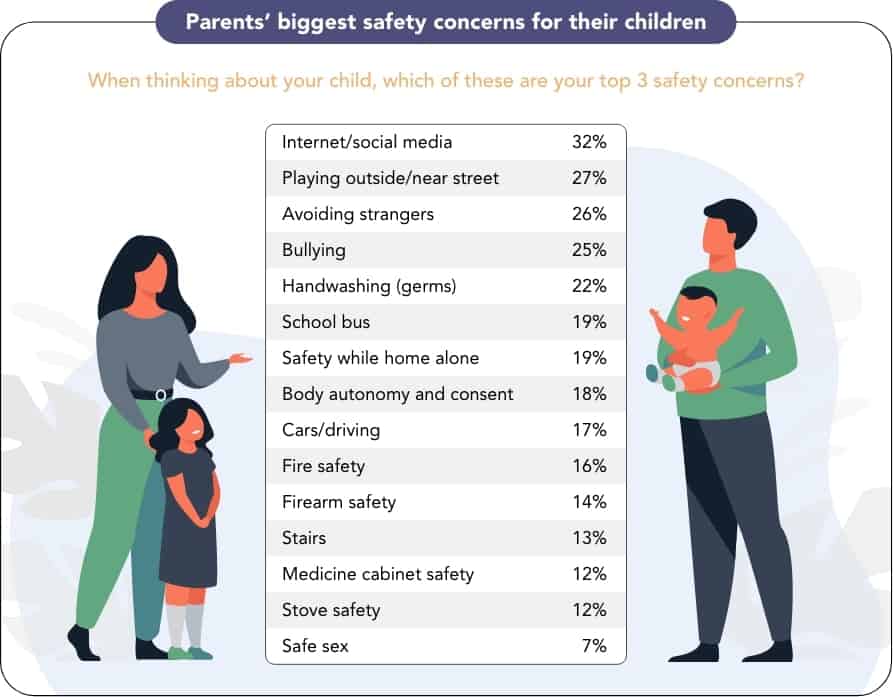 Note: Parents could select up to three concerns for each of their children.

Three more traditional concerns were also clustered near the top with similar percentages — safety outside or near the street, avoiding strangers, and bullying. Notably, though, about one in five parents listed handwashing or germs as one of their three biggest worries, likely due to the COVID-19 pandemic. Safe sex was the least potent worry for parents, though the majority of people included in our study have young children, and this concern was much higher for parents of teenagers.

Just under half of parents said they were more concerned about their children’s safety this school year than last school year, though a similar share of parents said their concern level hasn’t changed since 2020. Parents who work from home were more likely to say they were less worried about their kids’ safety this year than those who work outside the home. In many cases, parents who telecommute had considerably lower rates of many of the fears other parents had. Like parents overall, those working from home listed social media and the internet as their primary safety fear when it comes to their children. But 50 percent of those working outside the home listed this as one of their three biggest fears, compared to just 34 percent of those who telecommute. 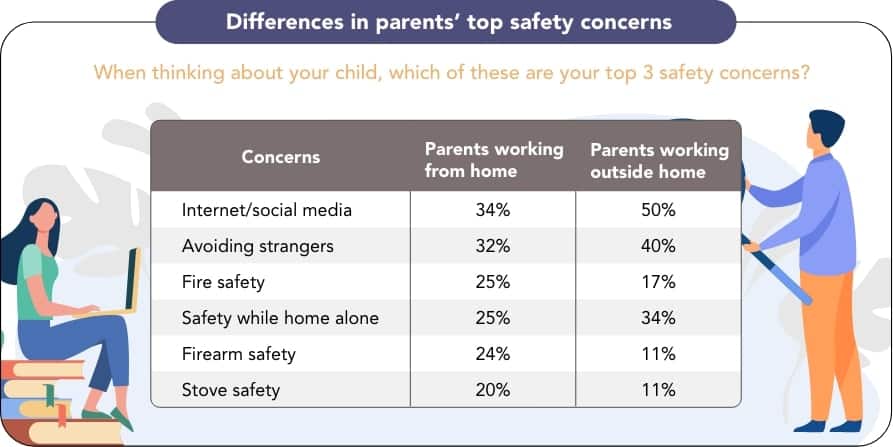 Other fears were less likely for work-from-home parents — avoiding strangers (32 percent vs. 40 percent) and safety while home alone (25 percent vs. 34 percent), but other fears were flipped. This may speak to remote-working parents anticipating that their kids will need to return to home-schooling this year. For example, 20 percent of parents who work from home listed stove safety as a big concern compared to just 11 percent of those who work outside the home, possibly as a result of these parents being more likely to cook additional meals for their remote-schooling children.

Safety at Every Age

Parents top concerns tend to change as kids grow up

Social media and the internet rank as a top-three fear across all age groups, with parents of kids between the ages of 10 and 18 listing it as their biggest concern. Overall, about one in three parents ranked online safety as one of their biggest concerns when it comes to their kids. But many other fears rise and fall depending on the age of the child, which is why safety practices and conversations should evolve as your children grow up.

Parents’ biggest safety concern for young children is being injured outside or in the street, and 32 percent of people with kids in this age range listed that as one of their three biggest worries. But internet and social media safety, the biggest parental concern among all age groups, is tied with bullying (30 percent). School bus-related concerns and handwashing are also prominent for parents with young children. Tips for keeping your young children safe at home, school, and online

For parents with preteen kids between 10 and 12, social media and the internet are the biggest concern. Around 43 percent of parents said this was one of their three biggest worries when thinking about their preteen child. Safety outside and near the street remained a major concern, as is potential contact with strangers. Compared to younger children, preteens may enjoy more unsupervised time outside the home and in their neighborhoods. Tips for keeping your preteen safe at home, school, and online

Almost half of parents with kids between 13 and 15 said the internet and social media represented one of their three biggest concerns for their children. Bullying and contact with strangers were a distant second and third, illustrating how much of life for this age group is dominated by the internet and social media. Tips for keeping your younger teen safe at home, school, and online

While social media and the internet remain the primary parental concern for older teens, safe driving and safe sex ranked second and third. Nearly 40 percent of parents with kids in this age group said car safety was one of their top concerns, while 31 percent rated safe sex as a big fear when it comes to their older teens. Tips for keeping your older teen safe at home, school, and online

Keeping their children safe is the driving force of any parent, regardless of their child’s age. But as babies grow into teenagers who eventually strike out on their own, the potential dangers that could affect them evolve. But having involved parents who are committed to helping them build good safety habits whether at home, in school, online, or in the real world can put your children on solid footing for the future.

Safehome.org conducted an online survey of 666 parents whose children were attending in-person school in the fall of 2021. Sixty-one percent of parents had one child, and 39 percent had two or more. We asked parents to select up to three of their main concerns for each of their children.