Nearly 1 in 4 Americans suspects their neighbors of criminal activity

It’s often thought that neighbors can help keep one another safe. They can keep an eye on your place when you’re out of town, hear possible cries for help, and generally provide comfort with their presence. According to a report funded by the U.S. Department of Justice, neighborhoods with higher social cohesion, also known as the emotional and social investment in a neighborhood, experience less fear of crime. Knowing your neighbors and their habits can also help you spot suspicious activity in your neighborhood, giving you the personal ability to aid in overall community safety, no matter where you live.

The definition of safety can look very different for different people, so what if you’re the problem? Would your neighbors rat you out if you’re breaking an apartment rule? Have they become more of a nuisance than a safety measure? Or what if the roles were switched, and you saw your neighbor up to some illegal activity – what would you do?

Curiosity got the best of us, and we decided to investigate by gathering some real data on the subject. We surveyed 1,009 people about their relationships with neighbors, the illegal activities they’d committed and witnessed, and how they handled each scenario. If you’re curious to see just how often your neighbors are breaking the rules; how much you’re likely to get away with in their vicinity; or what the general public thinks is the appropriate response to each scenario, keep reading.

Our study began with a look at just how common some neighborly offenses – illegal or not – are today. People were asked to admit to whether they had participated in each activity at home or around their neighborhood, as well as whether they were called out for doing so. The legality of certain activities could depend on location, however, as there are state-by-state variations to what is classified as an illegal offense. 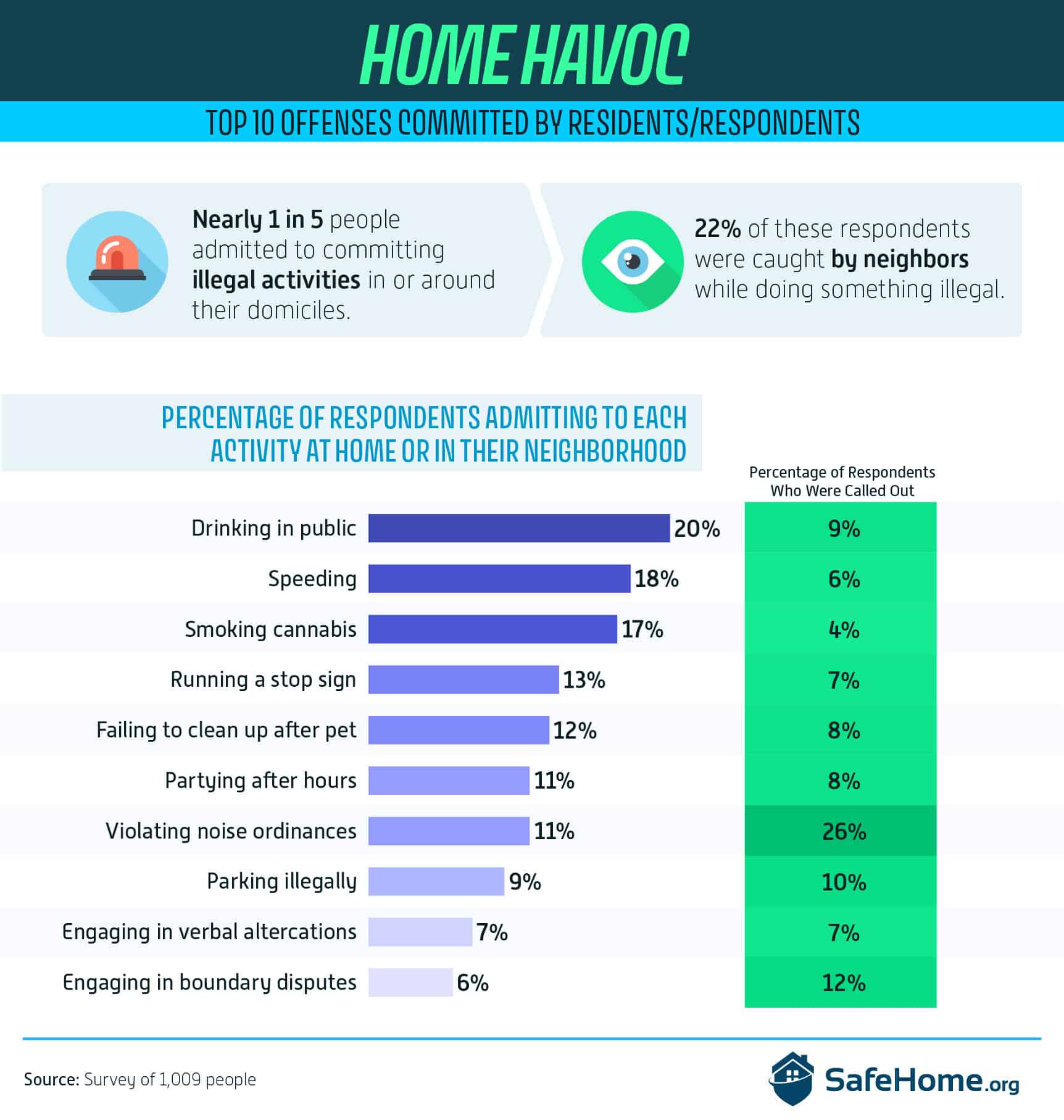 Nearly 1 in 5 people we spoke to admitted to illegal activity of some kind within their residence or surrounding area. Of this “criminal” group, 22% were caught red-handed. Whether there were repercussions, however, was likely determined by the severity of the infraction as well as the personality of the witness. While this study later dives into these consequences, let’s first look at which offenses were actually occurring the most often.

Drinking in public was the most common offense people admitted to committing near their home. The actual criminality of this activity depends on the location: Most states, such as Florida and those in the Northeast, prohibit public drinking in most municipalities, while other states, like California and Texas, have no statewide ban and allow public drinking in multiple areas.

Speeding was also fairly common and is universally offense, regardless of location. Eighteen percent of people admitted to committing this infraction around their neighborhood, which is presumably even more dangerous considering the area is residential. Only 6% of people who sped near their home, however, were ultimately ratted out, perhaps encouraging the behavior even more as a form of retaliation.

Certain generations were more predisposed to certain offenses. Drinking in public was the infraction of choice among millennials, while baby boomers were more often caught speeding. With many millennials now well-past the legal drinking age, it’s no wonder they are kicking back, along with Gen Xers being the most likely to smoke cannabis, while baby boomers are leaving these younger activities behind them for less-debaucherous offenses such as speeding.

Witness to the Crime

Next, we asked people to consider the other side of the story, or whether they had witnessed their neighbors committing any offenses. We also asked them if they had reported the incident after seeing it happen. 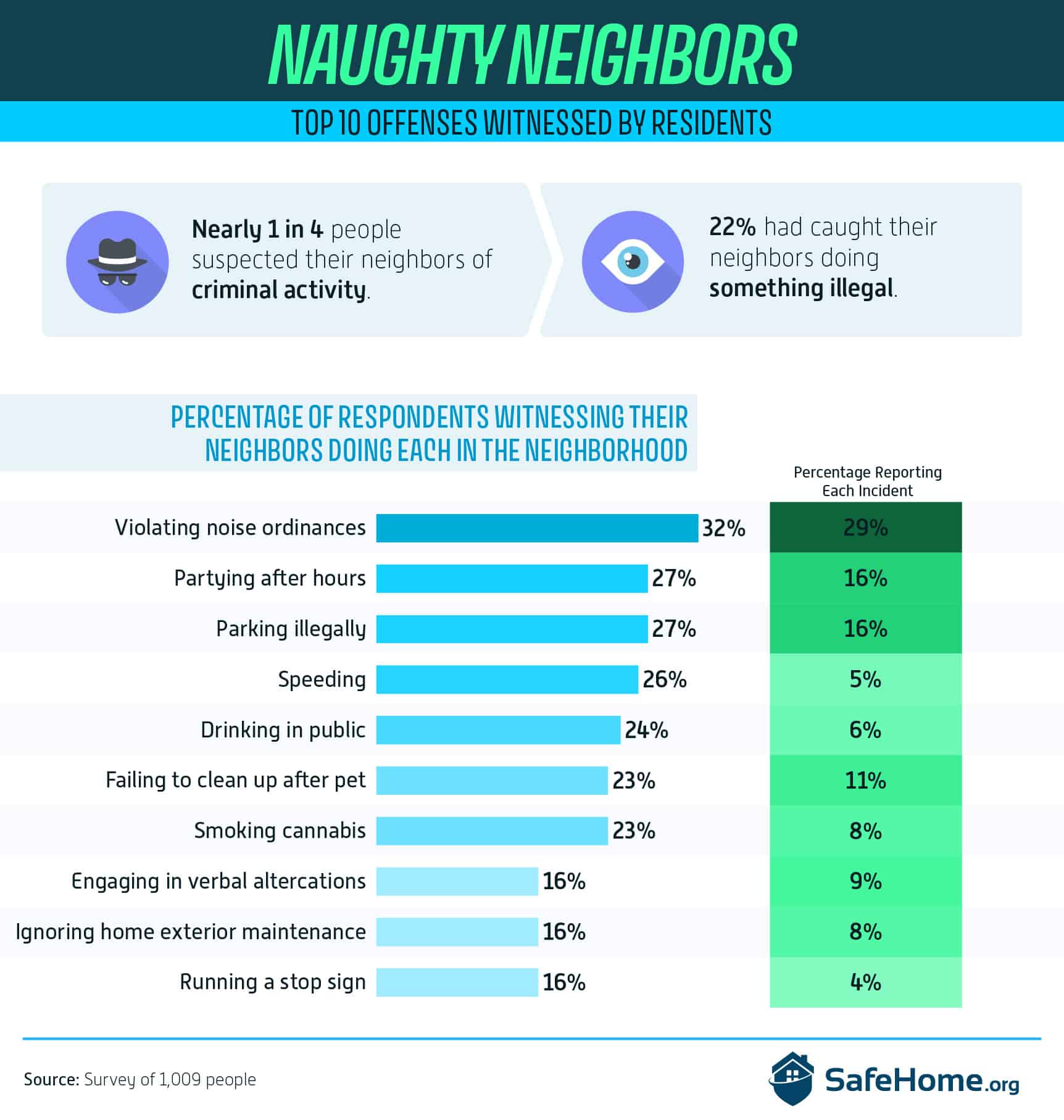 Witnessing crimes was evidently more common than admitting to them. Nearly 1 in 4 said they had personally witnessed at least one criminal activity, compared to the 1 in 5 who said they themselves had done something wrong. Most often, they witnessed (or heard) noise violations within their vicinity. This was frustrating or loud enough for many witnesses to take action, as 29% said they reported noise infractions when they occurred.

Though less common, illegal parking was also noticed by 27% of people and reported by an additional 16%. Perhaps these activities are reported so often because they genuinely impinge upon the convenience and comfort of neighbors, as opposed to something like drinking in public, which was common to witness but very rare to report.

Not So Good in The Hood

As we mentioned earlier, witnessing a crime can go one of several ways. A person can choose to confront the issue themselves, call the authorities, or perhaps ignore it altogether. The next piece of our study looks at the most common responses to general criminal activity as well as the reasons for not doing anything at all.

More than 1 in 10 – exactly 15% – of people called the police on a neighbor when witnessing some type of offense. Adding law enforcement to the mix, however, seemed to have been a little too drastic in the opinion of Americans, as one in three of the people surveyed believed they could confront their issues with their neighbors directly.

As for those who chose not to do anything at all, most (38%) said it simply didn’t bother them. Others (18%) were willing to overlook the problem even if it did bother them because they were friendly with their neighbors. And, more than 1 in 10 swallowed the inconvenience because they were genuinely afraid to do otherwise.

Tolerance Levels of Each Activity

Our study of neighborly criminal activity concludes with a look at each individual crime and how people would theoretically respond were they to witness it occurring within their immediate home surroundings. 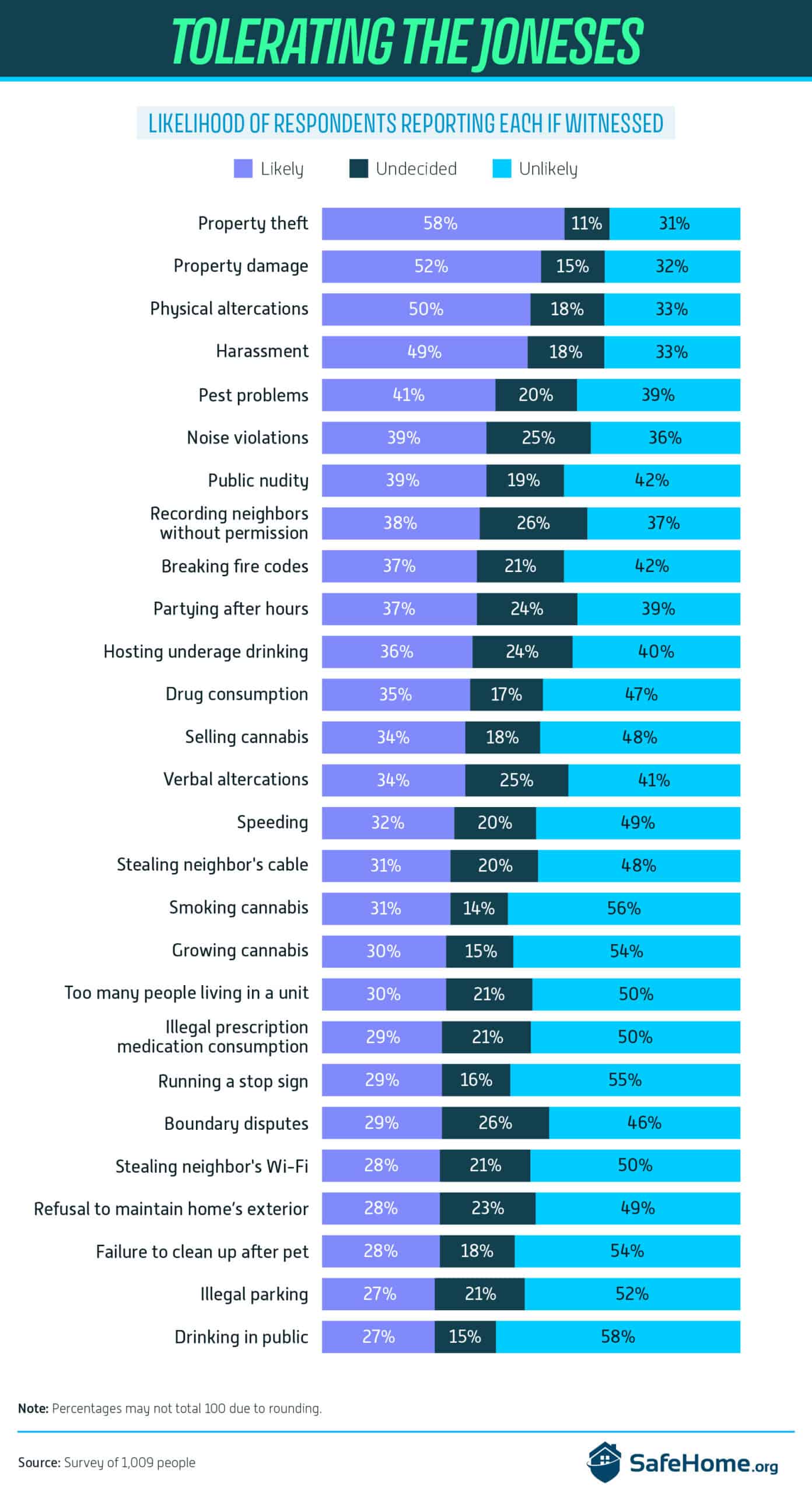 Property theft and damage were the most likely behaviors to be reported. This makes sense, as this causes the witness to incur a financial burden in order to fix the damage/theft, unless they can catch the instigator and hold them responsible.

People were more likely to report the selling of cannabis than they were the smoking and growing of it, indicating people are more uncomfortable with the activities associated with the sale of this drug in their own neighborhood than they are with the actual consumption of it. The selling of cannabis might bring in some unwanted visitors, while an individual’s self-inflicted actions are unlikely to stir up too much trouble for those living around them.

Evidence shows that most neighbors are relatively forgiving when it comes to committing crimes, but they do have a line that can be crossed. While most will forgive things like drinking and smoking in the vicinity, property theft and damage will likely have you dealing with concerned neighbors or even the police. Fortunately, these types of reactions help keep the public safe and seem relatively fair.

We surveyed 1,009 people ranging in age from 18 to 88 in order to explore perceptions of neighbor behavior. The mean age among respondents was 40.1 with a standard deviation of 12.3 years. 46% of our respondents identified as female and 53% identified as male; less than 1% were nonbinary.

Survey data has certain limitations related to self-reporting. These limitations include telescoping, exaggeration, and selective memory. We didn’t weigh our data or statistically test our hypotheses. This was a purely exploratory project that examines neighbor behavior.