How Much Does America Spend on Law Enforcement? Data & Trends for Every State

As waves of protests spread across the U.S. over the summer in the wake of George Floyd’s death at the hands of a police officer, law enforcement budgets have become a central issue in American society and politics.

While polling has signaled that Americans mostly don’t support calls to slash police department budgets, other consumer research shows support for plans that would reallocate taxpayer money and shift police responsibilities away from mental health incidents or non-violent situations.

As part of this discussion, we wanted to understand the shape of taxpayer spending on law enforcement, including police protection and corrections, and how it varies across the country and has changed over time.

Washington, D.C. has triple the law enforcement spending per capita as Iowa.

The data below calls for further analysis on spending, crime, and the role of and spending on law enforcement in society.

Law Enforcement vs. Other Spending

According to U.S. Census Bureau data, state and local governments spent a combined $200 billion in 2018 (the most recent year with available data) on police protection and corrections, which equates to about five percent of their total spending.

Compared with a decade ago, a smaller percentage of spending goes to police and corrections. In 2010, it was 5.7 percent compared to 5.2 percent today.

In most states, the percentage of state and local spending on police and corrections has fallen, but law enforcement’s share of funding has risen in a dozen states. In some cases, the swings have been dramatic. 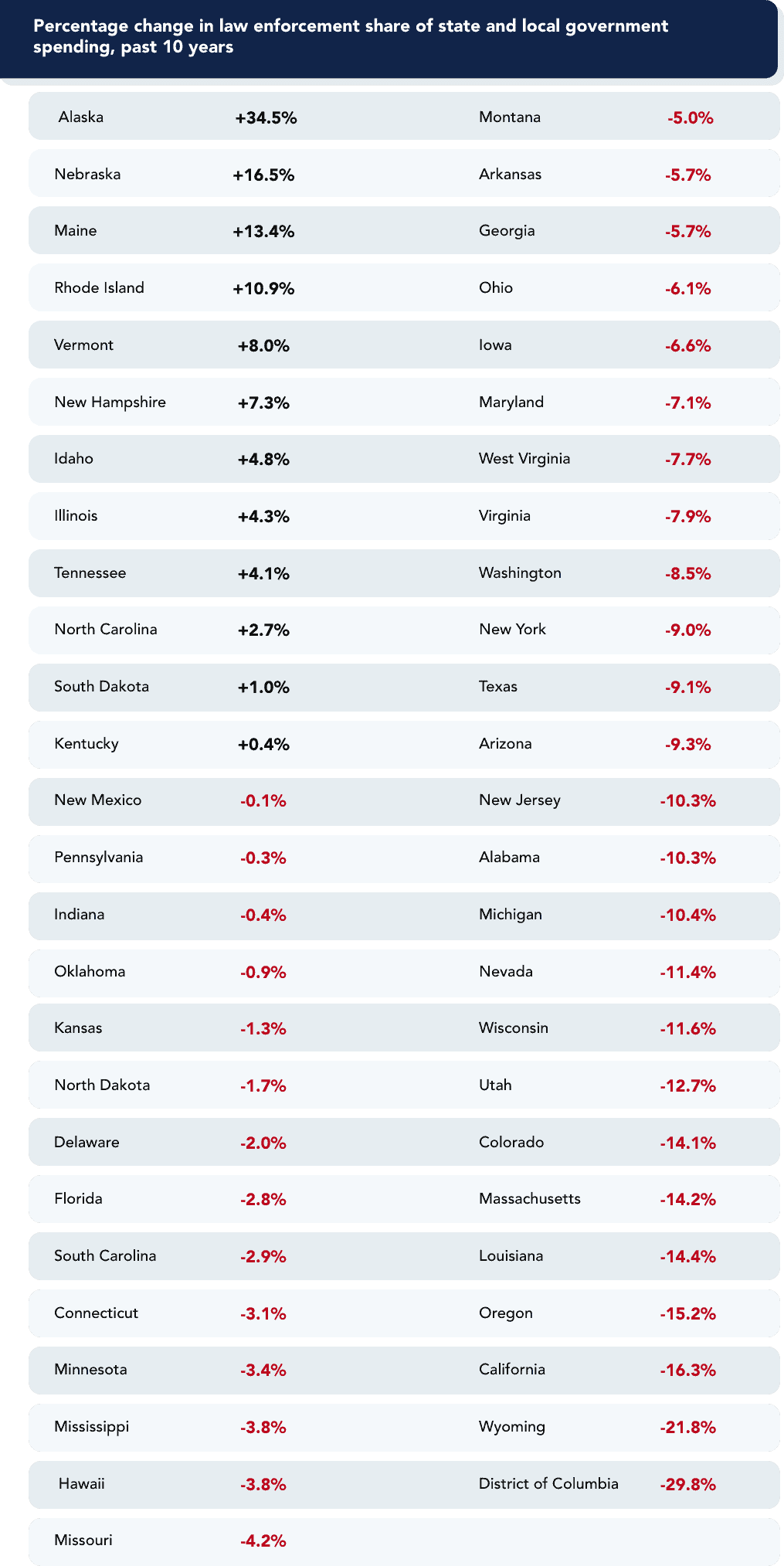 New Jersey has the highest rate of state and local law enforcement employment after adjusting for population difference outside of D.C., which has a much higher rate but is better compared to a city by virtue of population density. Police employment is lowest in Mississippi, according to the FBI’s 2018 data.

A majority of states have seen population-adjusted law enforcement employment rates decline over the past decade, which shouldn’t come as a surprise. For years, police departments and other law enforcement agencies have been reporting difficulty in attracting new recruits.

In addition to difficult recruiting, many police departments are struggling to retain officers. The cumulative effect is that in many departments, hiring standards have been relaxed and the application process streamlined. These factors could conceivably contribute to police officers who aren’t as qualified or as well-trained as people would prefer.

So what does all of this mean for public safety? Is state and local spending on law enforcement correlated with higher or lower crime rates or changes over the past 10 years? What about employment in law enforcement occupations?

Our analysis didn’t find any significant correlations between crime rates and law enforcement spending, but increases in law enforcement employment did appear to be at least partially correlated with crime rate declines over the past 10 years.

As with any statistical analysis, it’s important to note that correlation does not equal causation. And it’s perhaps most important to note that, famously, crime has fallen in the U.S. over the past several decades, so trends toward lower crime rates may have more to do with factors other than police spending or employment. 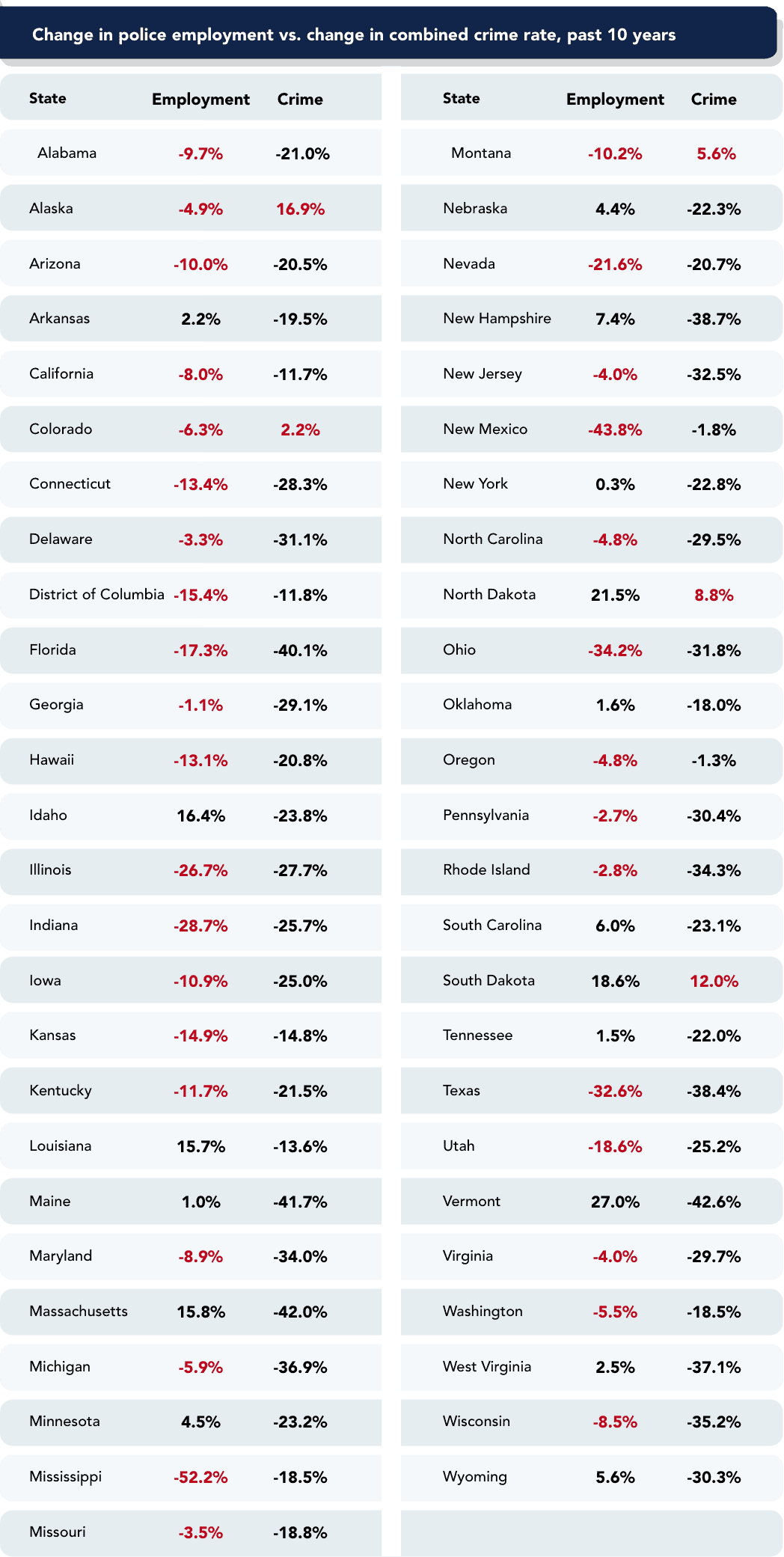 There’s no doubt that police budgets are a hot-button issue in this country, and it’s not difficult to see why. State and local spending on police has remained relatively steady over the past decade, but police employment has declined, as have crime rates in most places.

We’ve included links to our sources, but a quick word on where data came from for this analysis: