How We Review
*Providing accurate information is our top priority and we make significant efforts to do so on our site. However, the companies covered on our site may occasionally change their packages, offerings and pricing and there may be a delay in us making those changes. If you notice any outdated or inaccurate information, please do let us know.

Two great VPNs go head-to-head — let’s see which one came out on top.

Two great VPNs go head-to-head — let’s see which one came out on top.

Between these two security systems, our favorite is ExpressVPN.

Virtual private networks — or VPNs for short — are exploding in popularity right now, and for good reason. Our lives are increasingly taking place in digital spaces, and it’s becoming clear that these spaces aren’t secure.

From preventing government snooping to keeping internet service providers’ noses out of your business, a lot of people are deploying VPNs to bolster their privacy while they’re online.

And as with anything, supply strives to keep up with demand. As more people are wanting to use VPNs, more services are becoming available. You have a lot of options when it comes to VPNs, but they’re not all created equal. Some providers are outstanding while others are barely functional.

To help you separate the good from the bad (and the ugly) we’re pitting two well-known services against each other — ExpressVPN vs. Private Internet Access. We spent days hands-on testing both services. And today, we’ll see how they’re alike, how they’re different, and how they perform.

Express is undeniably one of the best services on the market today. When I reviewed ExpressVPN, I found they offer some of the best security measures available, their speeds are more than satisfactory, and they’re extremely easy to use. This VPN has been around for over a decade, and the experience certainly shows.

FYI: Interested in seeing how our two favorite VPN services stack up against each other? Read our comparison of ExpressVPN vs. NordVPN.

Despite having the most literal name on earth — Private Internet Access (or PIA) — is also a great service option for most folks. In our Private Internet Access review, I found they perform just as well as Express when put to the test, and they offer some pretty advanced features and security protocols. They’ve also been around the block a few times, and their service has been venerated by numerous third parties and media outlets.

It can be difficult to decide which of these services to go with, so to help you make your final determination, we’re going to start by looking at how they’re alike.

ExpressVPN vs. Private Internet Access: How Are They Similar?

Both Express and PIA have similar dashboards, and by extension, similar user experiences. And when I say similar, I mean almost identical: 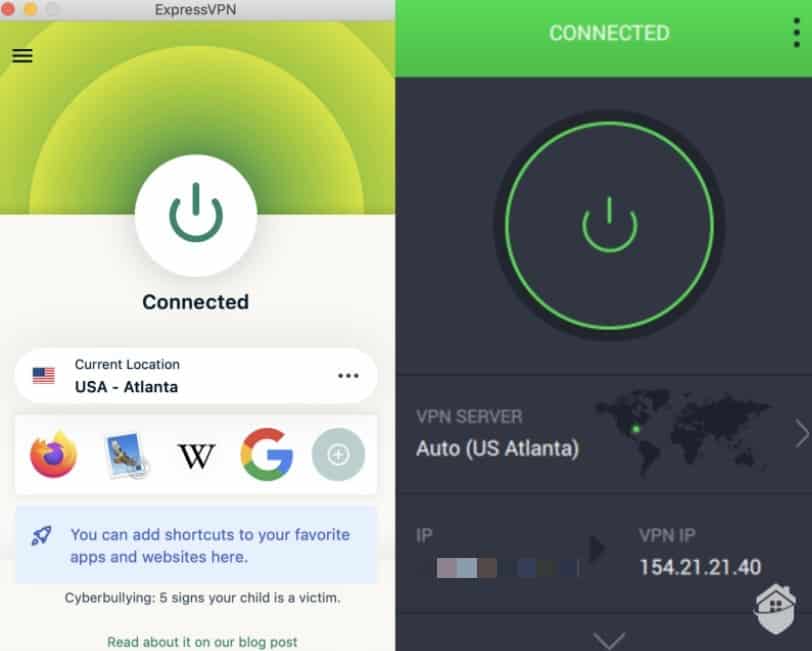 Both operate on a push-button interface. Once it’s switched on, you’re protected. Simple enough, right?

We will say that once you expand PIA’s dashboard, you can get into some pretty interesting customizability, but we’ll get more into that a little later on.

Neither Express or PIA offers any sort of optimizations for streaming or file sharing; however, this can be viewed in two ways. The pessimist will say they’re not great services for these activities since they haven’t tuned specific servers for them, but the optimist will say you can use servers from either one of their services to do whatever you want.

Both Express and PIA allow for streaming and file sharing, and they can both unblock geo-restricted content. While they don’t offer servers that say “this is specifically for torrenting” on the side, they’re still great options if you want to do either.

Both ExpressVPN and PIA operate thousands of servers. More specifically, Express has over 3,000 endpoints across 160 locations, and PIA runs about the same number of services across 99 locations in 78 countries. The slight advantage goes to ExpressVPN, but both networks are large enough that performance issues are pretty much non-existent while using either VPN. More on that further down. 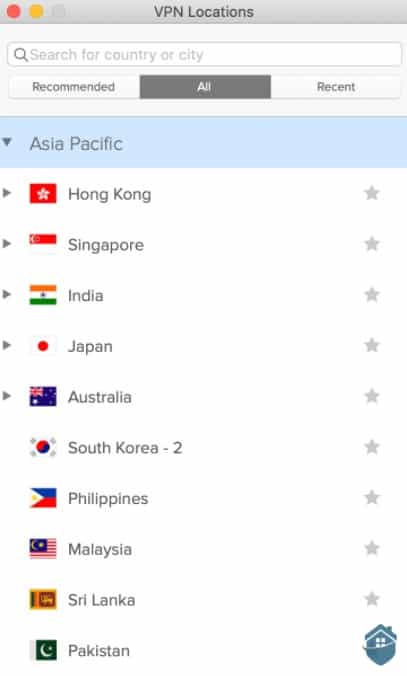 How Are They Different?

One of the main differences between PIA and Express is that the latter’s network is made up entirely of RAM-only servers. Very few VPN providers offer this security feature, but it’s one you should expect to see more switching over to in the coming years.

Why? Because RAM-only servers are now the gold standard for privacy. RAM requires power to keep track of data, so when they are reset, all the data stored on them — meaning your web-browsing activity — is erased without the possibility of recovery. While some services claim to be “no-log,” there’s always the possibility that your data can be lifted off of traditional servers. RAM-only networks remove this possibility entirely. So that’s a feather in the cap for ExpressVPN.

There are a lot of things to like about ExpressVPN, but customizability isn’t one of them. Express is designed to be as user-friendly as possible, so the user doesn’t really have the option to pop the hood and tinker around.

The exact opposite is true of Private Internet Access. It’s easily one of the most highly customizable, highly technical VPNs I’ve worked with, but that doesn’t mean it’s inaccessible to the layperson. You do have the ability to tweak a lot of options, but the VPN itself is laid out in an extremely intuitive way, so all of your options for customization make a lot of sense.

Put simply: PIA offers an ad blocker and Express does not. Something worth noting though, is that in my test of PIA, their ad blocker — which is called Mace — wasn’t bulletproof. While it did decrease the number of ads I experienced in my day-to-day browsing, a significant number still got through. To be fair, I have yet to review a VPN with an ad blocker that works 100 percent of the time.

Ah, the all-important question: How do these VPNs perform? Whenever you use a VPN, you can expect to see some slowdowns; that’s to be expected. However, if these slowdowns are significant, things can get pretty frustrating.

The good news is both PIA and Express performed admirably when I put them to the test. Anecdotally, I never really experienced any performance-related issues when I was using either service, and when I ran the numbers, the results confirmed that neither was lagging significantly.

When I was working with Express, my baseline showed I was running pretty fast.

And when I switched the VPN on, those speeds took a bit of a hit (as expected).

This slowdown was certainly measurable, but not really all that noticeable in my day-to-day use.

It was a similar story for Private Internet Access. My baseline was looking pretty good on the day I tested the service.

And when I switched it on, there were some measurable slowdowns but not enough for it to be a huge issue.

As you can see, my download speed actually increased by just a hair. Not too shabby.

Note that ExpressVPN has a quick connect feature that should, in theory anyway, connect you to the fastest available server. This was not my experience. In fact, when I used this feature my speeds decreased so significantly I thought my internet had disconnected. This won’t necessarily be your experience, but it’s something to keep in mind.

There’s no sugar coating this — ExpressVPN is one of the priciest VPNs on the market today. Like most services, Express is available on a subscription basis, and the duration of that subscription informs the price. You can read more about that in our guide to ExpressVPN costs, but here’s a quick breakdown:

As you can see, you’ll get the best price if you sign up for a yearlong term with ExpressVPN, but it’s still a little pricey.

FYI: If you’re looking for a great VPN that won’t break the bank, check out our analysis of VyprVPN. It’s easily one of the most affordable providers in the industry.

PIA is a little easier on the bank account. Similar to Express and many others, they offer their service on a subscription basis, and again, the longer you sign up for, the less you’ll pay. You can read all about it in our guide to Private Internet Access plans and pricing, but here’s the Cliffs Notes version:

This is pocket change compared to ExpressVPN. Private Internet Access clearly is the more affordable option. But as we always say, you get what you pay for.

So with all of this in mind, what’s our final decision? Which is the better VPN?

Express vs. PIA: The Verdict

As much as we’d like to declare a winner, this one is a little too tough to call. Both are great services with their own unique benefits and drawbacks. Instead of saying which is the best, I’ll give you my rundown on which type of user would like which VPN.

You should use ExpressVPN if…

You value simplicity and security above all. While you’re going to pay a little more for it, Express is simply one of the most robust VPNs available. It’s extremely secure, ultra-reliable, and so easy to use that even the most tech-resistant user will have no issues at all. Its RAM-only server network is one of the best in the business, and its performance is outstanding.

You value customizability and value. PIA is fast, secure, and user-friendly — with the added benefits of being affordable and customizable. There’s no end to the dial-turning and lever-pulling, so if you want a VPN you can tinker around with, Private Internet Access might be the one for you.

At the end of the day, these are two great services, but I have to give the slight edge to ExpressVPN for its user-friendliness. And let’s not forget about their RAM-based servers for ultimate digital privacy.

Now, if neither of these VPNs strike your fancy, head over to our list of the best VPN services of 2023. There’s sure to be something there that’ll satisfy your needs.

Does ExpressVPN have a larger network of servers than Private Internet Access?

While both providers operate networks of around 3,000 servers each, Express has servers in more countries than Private Internet Access.

In our tests, we couldn’t find any discernible difference in speeds between PIA and Express.

While both services are secure, we’ll say ExpressVPN is more private by virtue of the fact their network is built entirely of RAM-only servers.

It’s difficult to say which service is better — they’re both great in their own right. ExpressVPN is more user-friendly, but PIA is more affordable.